In May of 2017 I made an overnight stop in Memphis, Tennessee on my way to Branson, Missouri to start my 6-week “Texas Loop,” a short trip through the south-central United States.  While in Memphis I revisited the location where something happened to me the year before and has become yet another amusing JohnBoy story.  Let me start back in late May, 2016 when I stopped for a few nights in Memphis on my way back home from a short trip to the southeast US.

I was staying at an Airbnb east of town and my first full day there I headed out to see the city for the first time.  My first stop was Overton Park, a large city park only a few blocks from where I was staying.  And when I say large I mean large – 342 acres, or an area roughly 10 city blocks by 13 city blocks.

Among other things Overton Park features two art museums, the Memphis Zoo and a 9-hole golf course.  The eastern portion of the park is heavily wooded.  I stopped at Overton Park to find the “Bike Gate,” which I believe had been mentioned in my AAA Tourbook.  The Bike Gate is a project by Memphis artist Tylur French (and yes, that’s how he spells his first name) which was completed in early 2014.

I entered the park from the south (Poplar Avenue) entrance.  Not long after driving in to the park I saw this sign…

… so I knew I was on the right track.  After making a right turn at the intersection I soon saw where the road would enter the nearby woods in the distance: 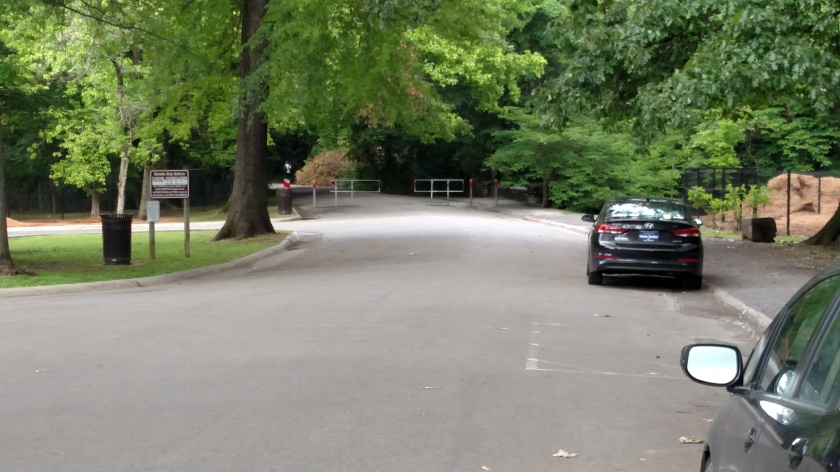 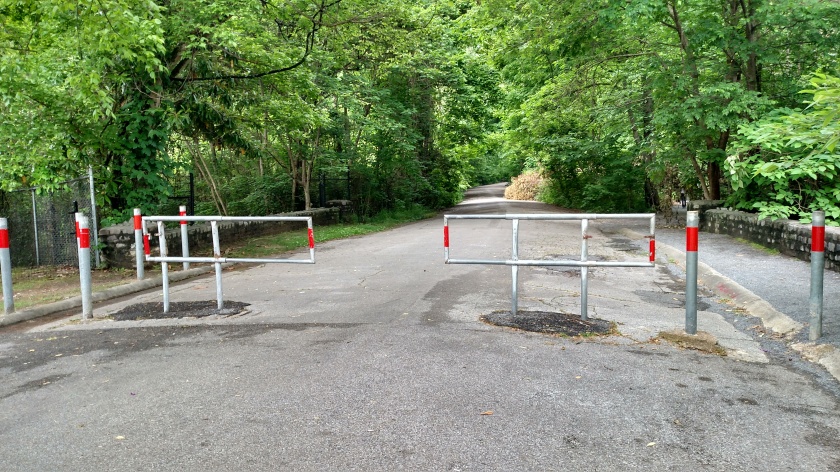 I drove past the barricade, which was open wide enough to let my car pass through (these photos were taken later in the day), and followed a very nice paved road into the woods. 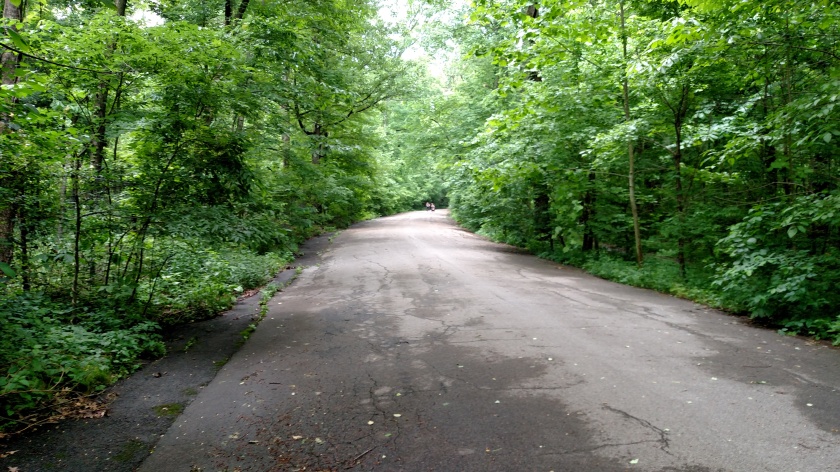 I came to two forks in the road (with no signage) and opted to turn right both times.

I soon came to the end of the road at what appeared to be a park maintenance facility.  I decided maybe this was somewhere I wasn’t supposed to be and turned around to retreat.  When I got back out to the barricade it was, much to my dismay, closed and locked.  A dilemma…

I walked past the gate to a nearby signboard which had flyers posted for upcoming events.  It was only about 8 o’clock in the morning but I called the only phone number I could find for the park office and got a recording.  I left a message explaining my plight and asked if they would please, please, please send someone to liberate me and promised I would never do it again.

While I was waiting I saw two maintenance workers emptying trash barrels at the nearby children’s play area and walked over to explain my situation.  They fortunately had keys for the lock and were able to open the barricade and let me out.  Turns out the barricade WAS a bike gate, designed to only let pedestrians and bicyclists pass in order to traverse the nicely paved paths without being endangered by vehicular traffic (like me).  To paraphrase Obi-Wan Kenobi – “This is not the bike gate you’re looking for”.  I asked the worker where the artistic Bike Gate was and he advised me to exit the park where I had come in, turn left and proceed around to the East side of the park.

I followed his instructions and sure enough, there it was, with a convenient parking lot nearby.  There were stern signs warning of substantial fines for driving on the pedestrian paths (oops), and a short walk away was the object I had been seeking.

Mr. French gathered almost 300 bikes of all kinds – basic adult and child size bicycles, tricycles, Big Wheels, tandem bikes (for 2) and even a penny-farthing bike (with a huge wheel in the front and a tiny wheel in the back).  He painted them bright colors, welded them together and they were hoisted above an arch on a sturdy set of metal pillars.

I continued my visit in Memphis without further incarceration and will post those photos later this year (Beale Street, Graceland and several other interesting places).

When I returned to the park in early 2017 I discovered that donors had contributed money to construct a much more aesthetically pleasing barrier at the inside-the-park entrance to the pedestrian paths to keep wayward tourists (like me) out.