When I left Branson, Missouri in May of 2017 I headed south towards Texas.  I actually drove southeast on some beautiful scenic roads through central Arkansas and crossed into Louisiana where I would spend the night in Shreveport.  The next morning I drove further south on the west side of Louisiana and crossed over into Texas on Route 21 to the little town of Milam.  One of the interesting things I saw there was a road sign indicating that the distance to the next fairly big town was 19 miles and the distance to El Paso (on the other side of the state) was 860 miles!  They say everything is bigger in Texas and this made it clear that the lower portion of Texas is, indeed, very big.

From Milam I traveled west through Nacogdoches, then southwest to the town of Bryan.  A friend suggested I start including maps to illustrate the areas I refer to and I did look online last night to see if I could find a good map of eastern Texas but couldn’t find anything that wasn’t really cluttered.  At Bryan I turned left and started driving southeast towards my ultimate destination of Houston where I would be spending the next three nights.

Shortly after turning left on Route 6 in Bryan I came to College Station and shortly after that I saw a sign for Texas World Speedway, a now dormant racetrack.

I drove toward the facility thinking I’d be lucky if I could get to the fenceline and maybe get a picture of the back of the grandstands.  Much to my surprise the gate was open and there was someone at a small shed at the entrance who told me that the track was open and was hosting a group of motorcycle enthusiasts.  He had me sign a liability waiver, put a wristband on me and told me I could pretty much go anywhere I wanted except on pit road and on the track itself.

As I said, there were motorcycles on the track (look closely at the photo below) 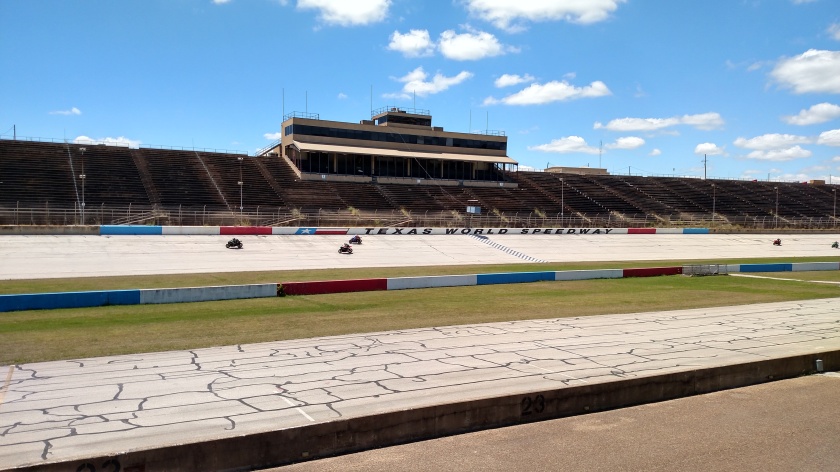 It wasn’t a race but just practice for an upcoming event.  I spoke to one of the guys who was participating: 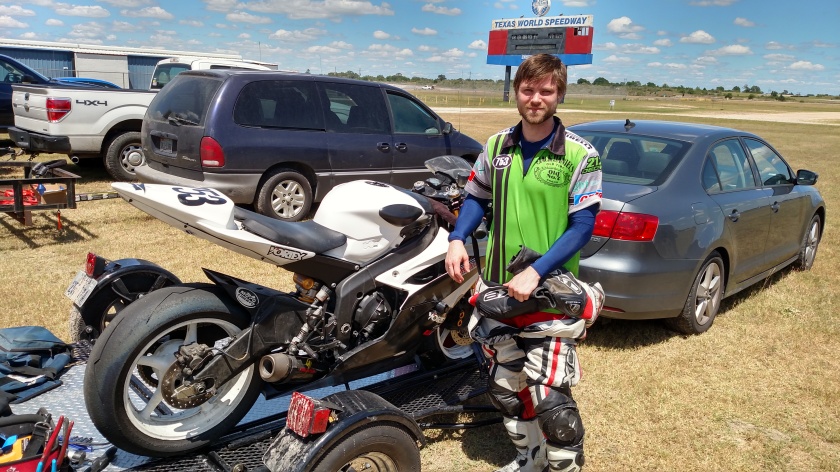 He had two bikes, the one he had just finished riding and another still on the trailer.

I was able to walk through the paddock area and up into the infield grandstands (well, an elevated viewing platform).  I didn’t own a digital camera at this point so the only photos I have were taken with my smartphone.

The cycles were riding on part of the main track as well as part of the road racing course which goes to areas both inside and outside the main oval:

TWS consisted mainly of a 2-mile oval, one of only 7 tracks in the US 2 miles or more in length.  TWS had it’s heyday from when it was built in 1969 until the final NASCAR and IndyCar races were run there in 1981. After that it continued to host SCCA (sports cars), motorcycle and other races, driving schools and car clubs (Porsche, etc), and could be rented by major race teams for testing.

NASCAR’s Greg Biffle ran the fastest stock car lap at TWS in 2009.  His fastest speedtrap speed was 218 mph and his overall average on that lap was 195 mph.  Jeff Andretti holds the then-record (though unofficial) open wheel car closed course speed of 234.5 mph in 1993 while testing for that year’s Indianapolis 500.  Both of those sessions occurred on the oval portion of the track.

I was at TWS in May 2017 but later that year Hurricane Harvey devastated southern Texas in general and Houston in particular with torrential rain which resulted in major flooding.  As part of the cleanup from that hurricane flooded vehicles were transported to TWS for storage. 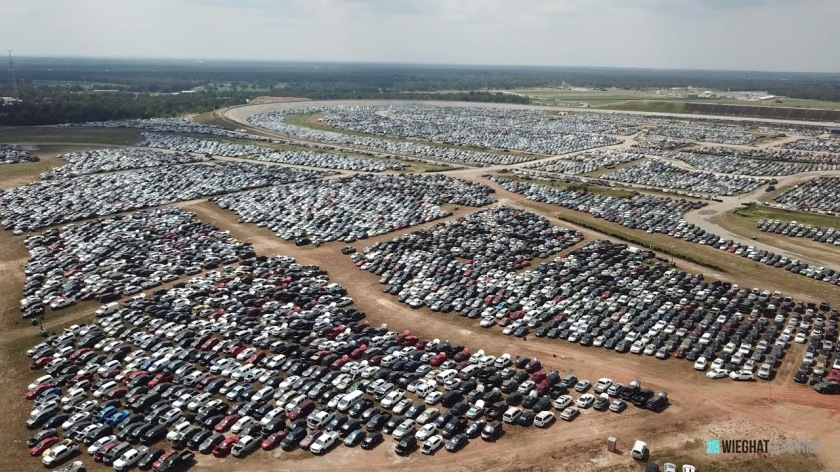 When I was there in 2017 I read that the track facilities were to be demolished and the grounds used for a major housing development but now that all those vehicles are on the property I don’t know what the future holds for this large tract of land.