Here are some things I saw Saturday as I walked around “Old Town”.

The sign below remains a mystery to me (I’m not Canadian).  I’m thinking maybe a place for individuals to gather and as soon as you have 4 people you can go play golf as a foursome or perhaps play pickleball or poker. 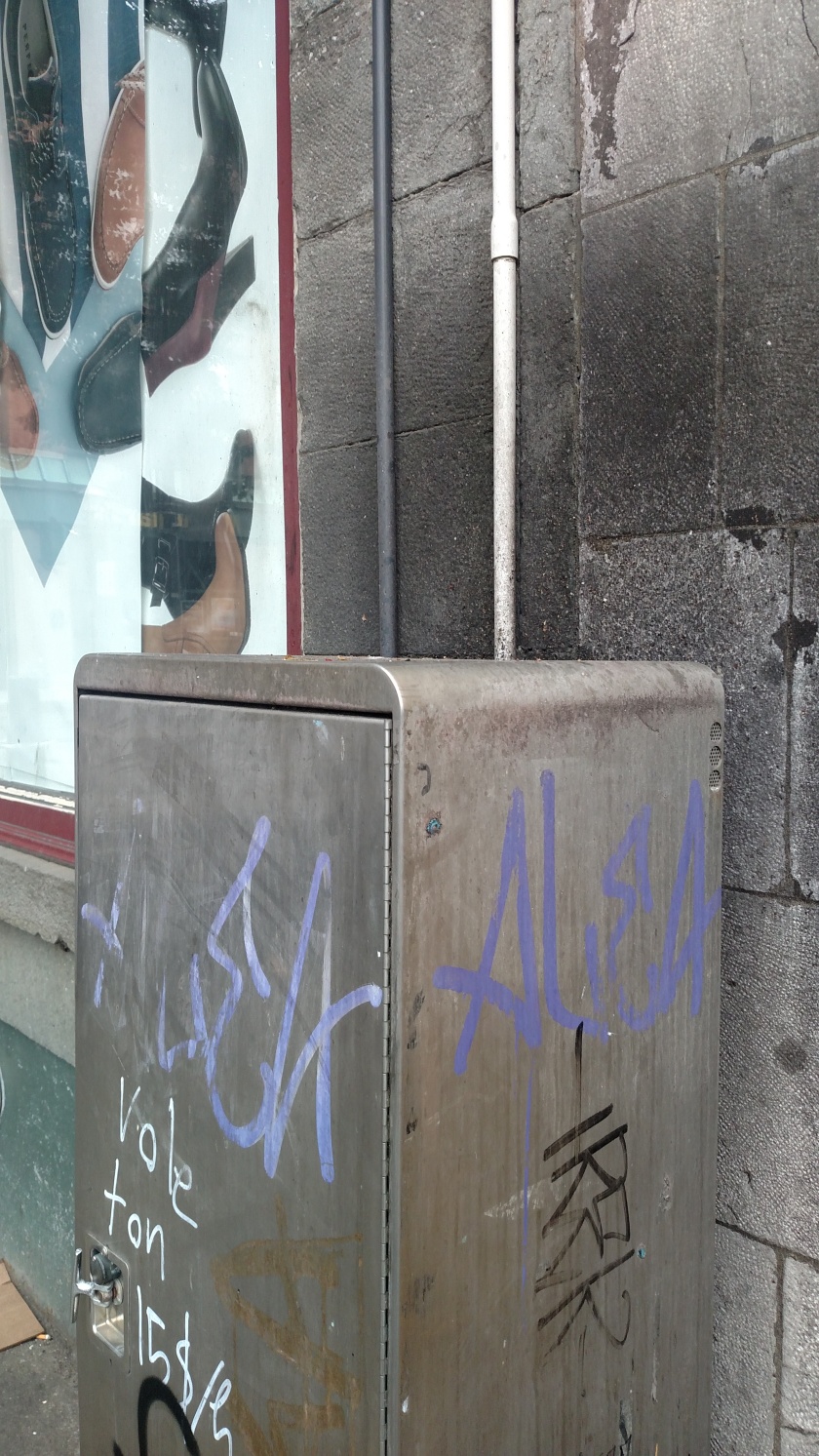 Nothing left to see in the photo above today but yesterday I stood for between 5 and 10 minutes and watched a seagull devour the better part of the toppings on a large slice of pepperoni pizza on top of this box.  My attention was drawn to it as it shooed off other seagulls which wanted a piece of the action.  I didn’t even know that seagulls liked pepperoni, and perhaps after a few hours this one discovered it doesn’t.  If I had one of my heartburn pills with me I might have offered it a small piece of it but a) you’re not supposed to feed wild animals, and b) you certainly aren’t supposed to medicate them.  I am reminded of the scene from Fight Club where some mischief-makers gave laxatives to a flock of pigeons which were hanging out near a high-end car dealership, with predictable results.

Overnight I had reviewed the maps of the downtown area to see if there was anything I had missed seeing during my marathon walking session on Friday.  The most glaring omission was the Notre Dame Basilica.    It turned out that I actually had seen it but since it was undergoing some major renovations I skipped it, not even realizing what it was. 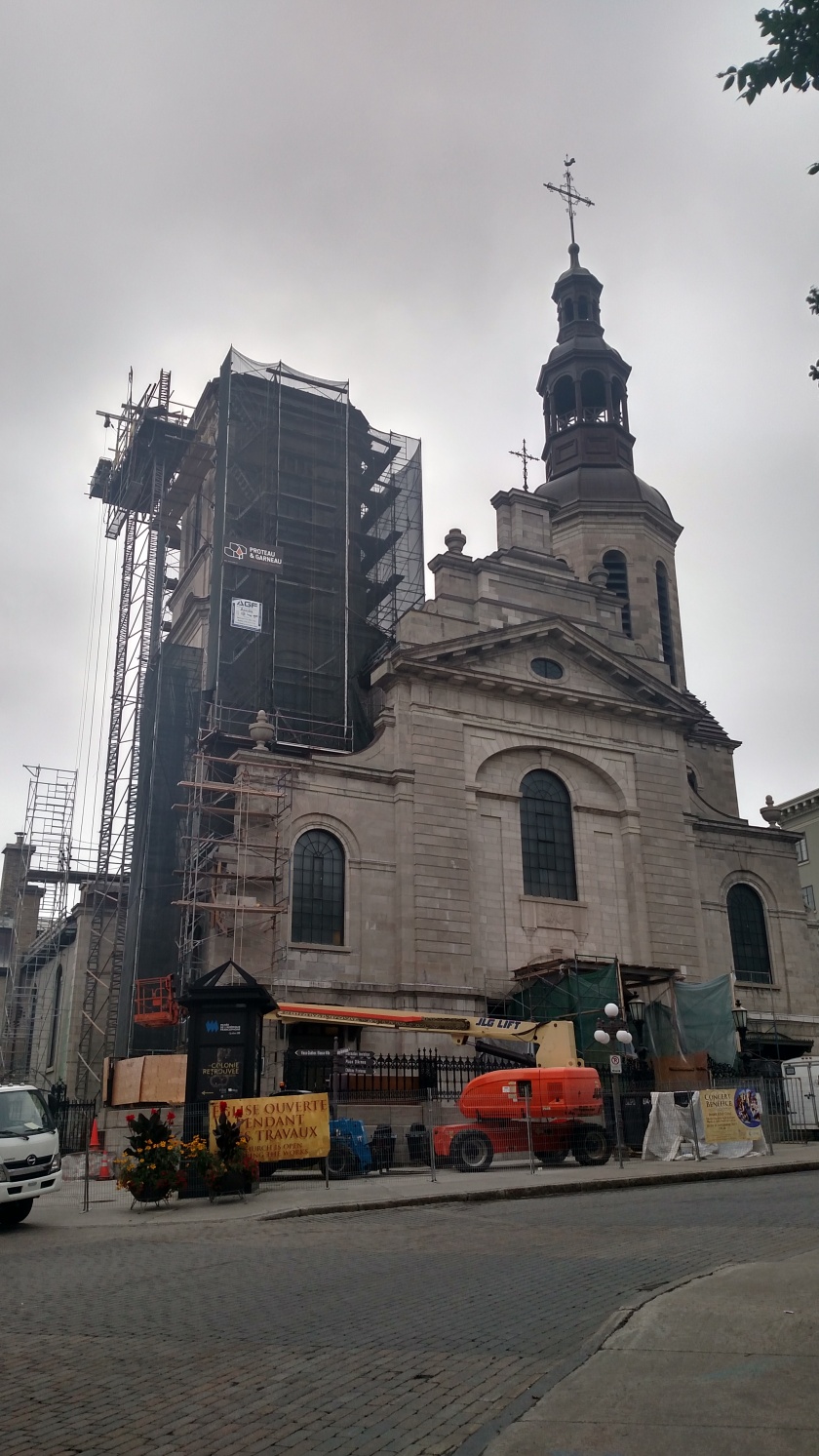 Here is a photo I found online which shows the Basilica before repairs:

Another major landmark which I have referenced but haven’t posted many pictures of is the Château Frontenac hotel, the tallest and probably most photographed building in the city.  It, too, is undergoing repairs and there was scaffolding up much of the side of the hotel which faces the St. Lawrence River, generally considered to be the front. 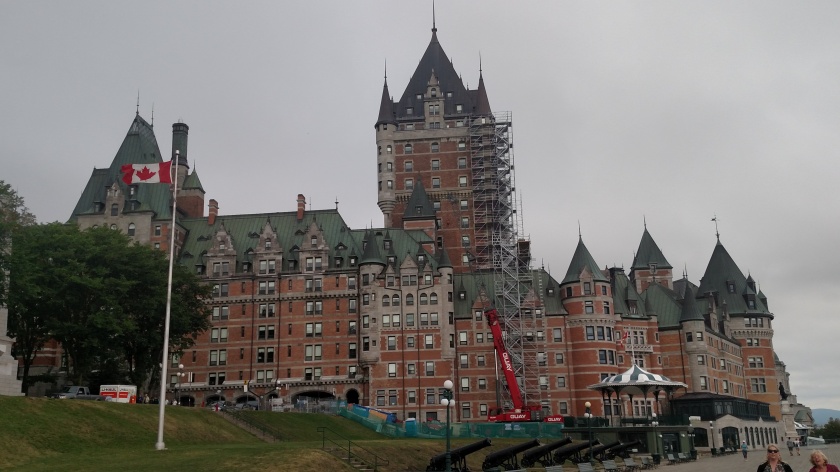 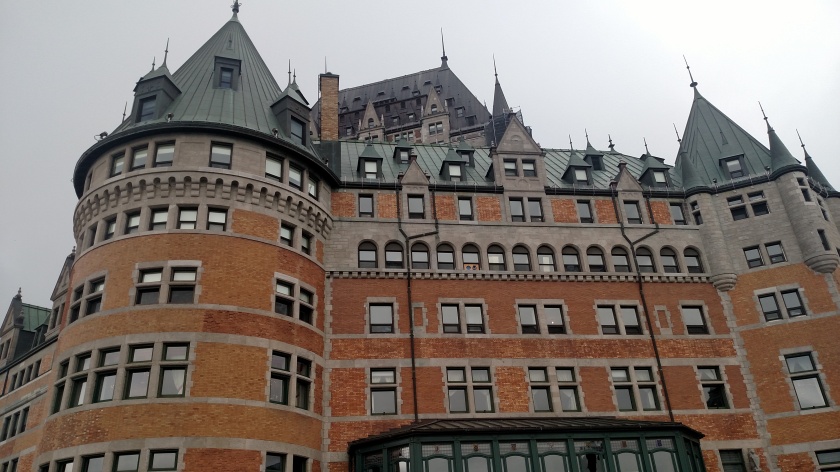 Here is a photo I found online which shows the hotel without the scaffolding.  This is the view from the opposite side of the river:

Here is the Funicular admission booth, located on the wooden walkway next to the hotel.

Yesterday’s shot was from the bottom looking up, this one is from the top looking down:

Here are more things I saw Saturday as I walked around “Old City”:

This was the view looking out over the St. Lawrence River from the wooden walkway next to the Château Frontenac hotel:

In the foreground below is a statue of Samuel de Champlain, the founder of Québec. 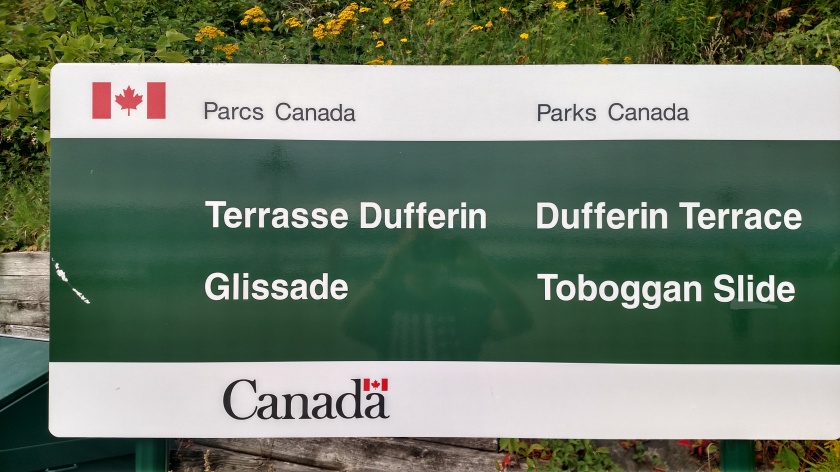 Believe me, these two ladies were as disappointed as I was.  Sheesh – we came all this way…. 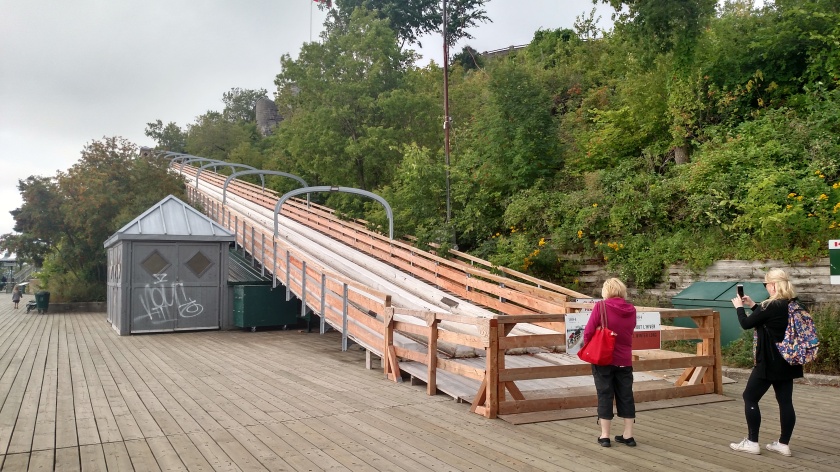 Canadian Sign Language clearly wasn’t enough for the driver of this car which had multiple tickets under the windshield wiper:

Maybe he or she thought it meant “no peeing”….

And here’s another look at the massive fortification which surrounds Old Town.  Please ignore the modern building in the background:

Here is some artwork I saw beneath a highway overpass in downtown Québec: 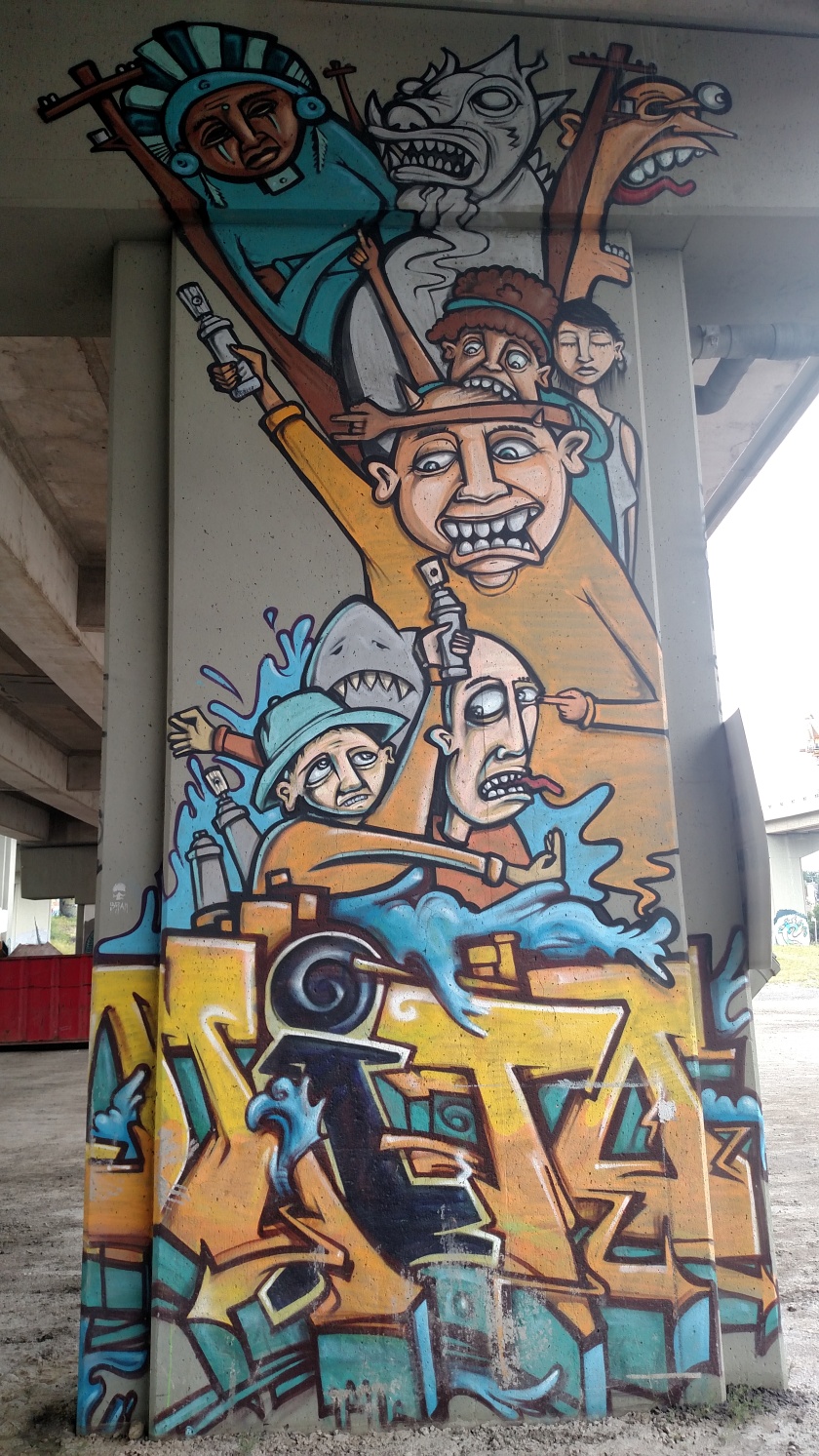 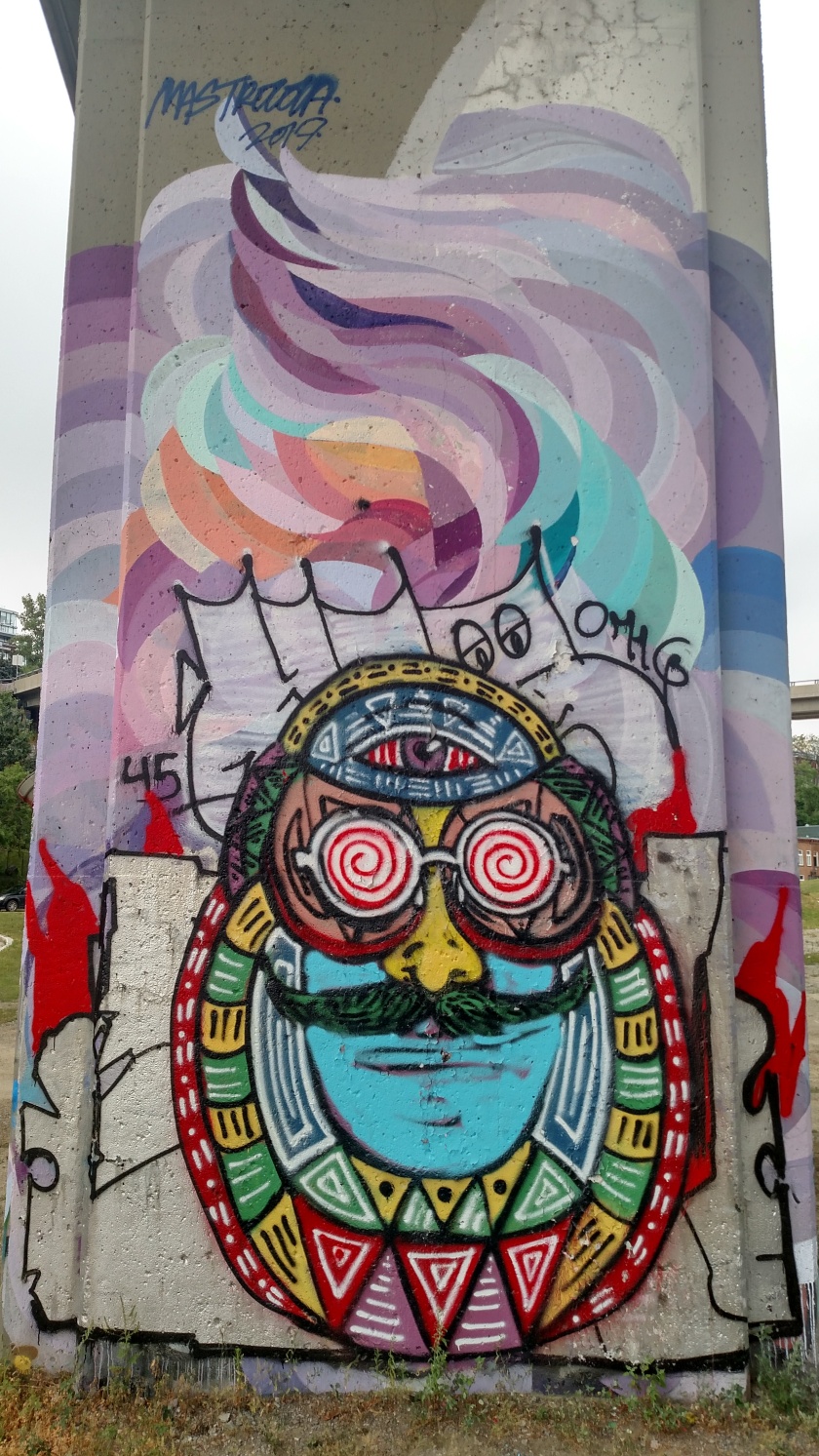 The photo below made me think of the classic chicken & egg dilemma.  Did the lower portion cover an earlier full-face creation or is the strange looking-over-the fence creature part of the original design?? 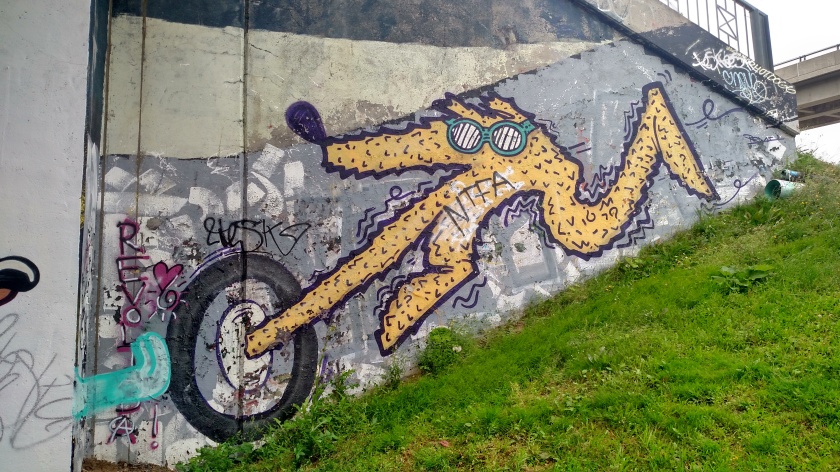 Here are more things I saw and did Saturday as I walked around “Old Town”:

I normally don’t post food pictures but I’m going to make a rare exception.  This is poutine, a Québec specialty.  You can get it lots of places but Québec’s is supposed to be the best.  I was planning to have it at a chi-chi restaurant in Old Town (because TripAdvisor said their’s was the best in town) but my Airbnb host, who has lived in Québec all his life, said just go to Ashton’s, a fast food chain.

Freedom Fries (take that Québec), brown gravy and cheese curds.  All three need to be quality but the real secret is the cheese which should squeak between your teeth as you chew it.  Seriously.

As I was heading for home I saw this frog sculpture outside a toy store:

In one of their display windows was this huge gumball machine: 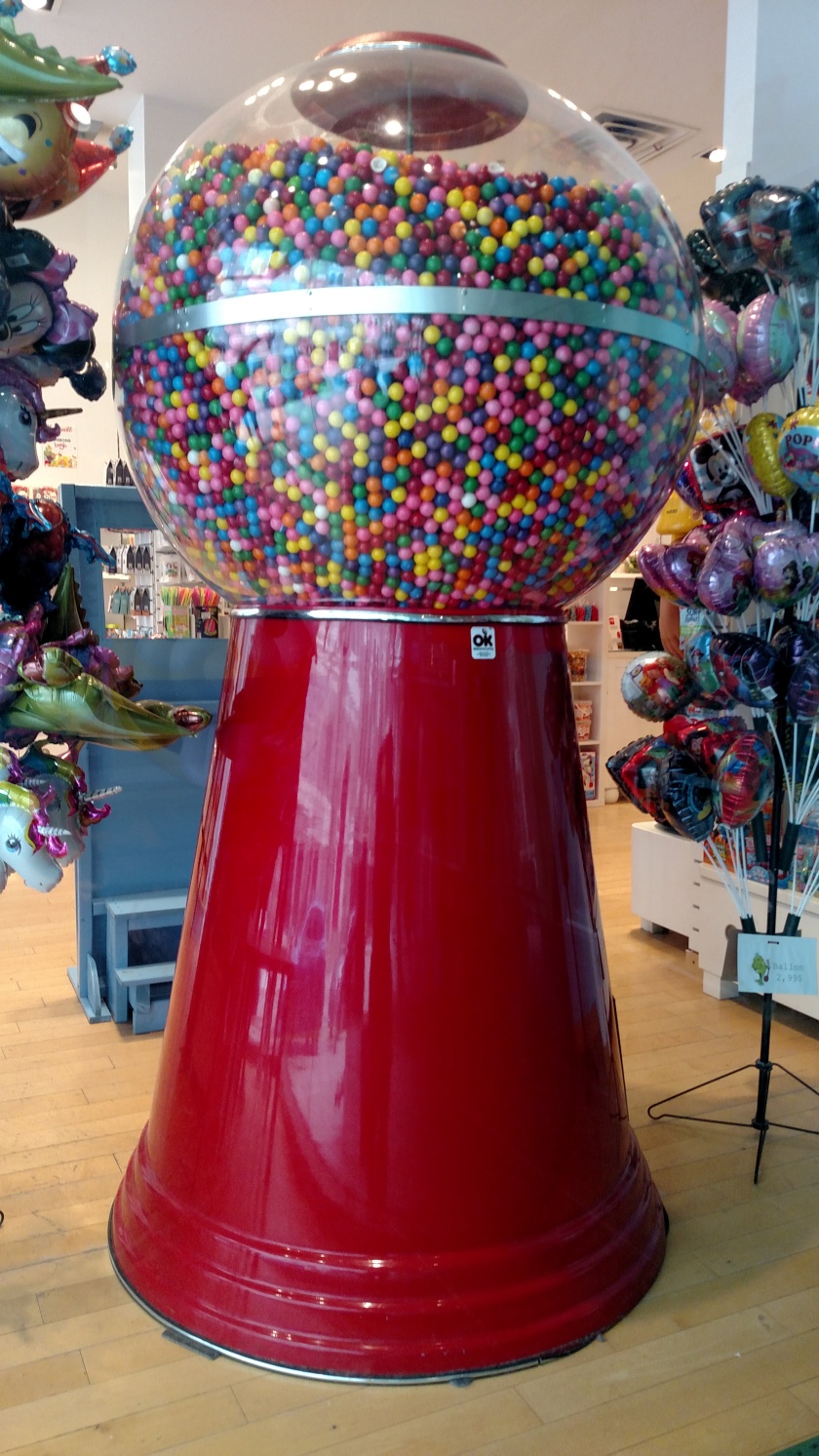 And to give you an idea just how big it is here is a photo showing a conventional gumball machine next to it: 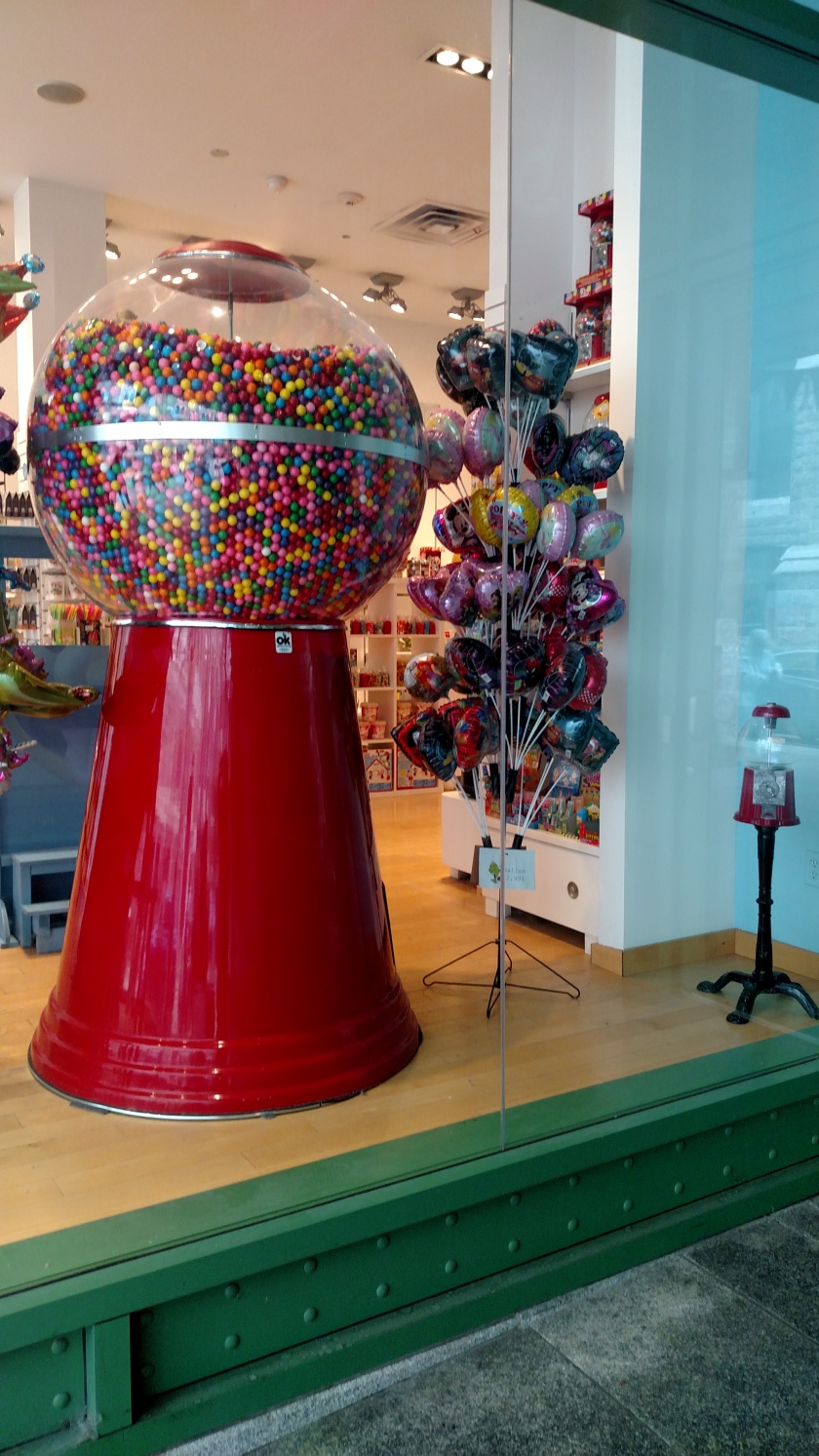 Before I left I stepped up briefly in the green base below the window pane to confirm my suspicion that the large machine was taller than me.

Finally, this is the spiral staircase leading up to my Airbnb which was on the second floor:

I was staying in the Limoilou District, the first residential area north of the downtown area.  The neighborhood reminded me very much of the one I lived in in suburban Chicago for the first 10 years of my life (although our stairs were indoors).  Here are apartments on both sides of the street where I stayed:

Each morning I would walk 10 blocks to a French bakery for pastries, then 10 blocks back home to leave some of them there as a reward for getting back home in the evening.  My Airbnb host walks downtown to work and many folks ride bicycles.  My car never moved the first two full days I was in town but I did use it the third day to visit some venues which were too far away to get to by walking.