On day five of my trip to south-central Texas I headed north towards Austin.  First thing in the morning, though, I actually headed east from where I was staying in Buda to the town of Elroy to tour the beautiful Formula 1 racetrack called “Circuit of the Americas”.  F1, as it is known, which races at venues all over the world, used to run their United States race at Indianapolis Motor Speedway (I almost went one year but didn’t).  In 2010 they announced that they’d be building their own track, thank you very much, near Austin, Texas – far enough south that they wouldn’t have to worry about cold winter temperatures buckling the track surface.  The track opened in 2012.  It’s future is uncertain, however.  They have commitments through 2021 but are seeking $25 million from the State of Texas to help support the facility and have so far been turned down.  This a state-of-the-art F1, FIA Class 1 facility which was built at no small expense specifically for racing and I can’t imagine F1, who, as I like to say, “has more money than God,” letting it go.  I certainly hope not.

I tried to find a map online showing both Austin and the track but was unsuccessful.  CoTA, as it is known, is about 15 miles southeast of downtown Austin, about 5 miles past the airport.

Here is a map of the track configuration: 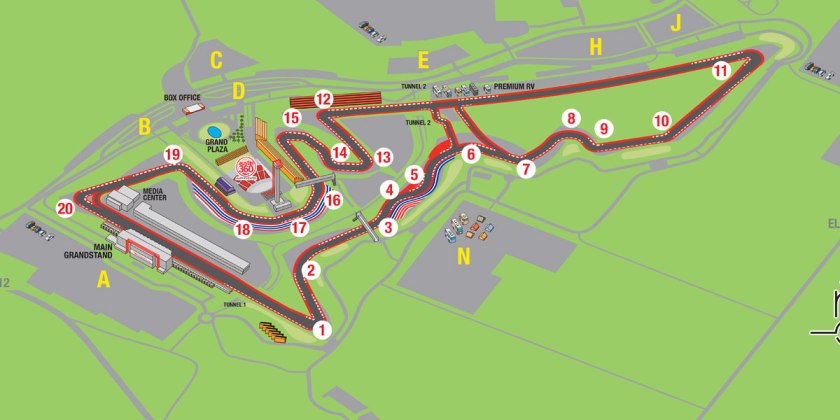 The track is 3.427 miles in length, has 20 turns, and features 133 feet of elevation changes.  To best illustrate those elevation changes here is a photo I found online published by a motorcycle magazine for one of their articles about a bike race held at CoTA.  It shows the track surface as if it were a roller coaster, a pretty clever idea I must say.  Please note that the elevation changes are exaggerated (at least for Turn 1) but this gets the point across.

I knew I’d be doing the tour one day while I was in the area so I actually swung by the track at the end of my first day in Austin a few days earlier to make sure I knew how to get to it and roughly how long it would take from where I was staying.  I got a picture of the back of the grandstands and the track logo while I was there:

I got to the track about a half-hour early the day of my tour and ended up getting a private tour because I was the only customer they had for 10’oclock!  A very nice and well-informed woman drove me around the outside of the track and explained some of the history of the facility which has only been open a few years.

The most prominent feature of the track, which you’ll see in many of my photos, is the 251-foot tall Observation Tower.  Because if it’s popularity fans must pay to go up in it during a race and may only stay a certain amount of time.  My tour guide told me a story about Bernie Ecclestone, the former President of F1, kicking all the fans out so he could entertain his friends up there (and what Bernie wanted, Bernie got).  Needless to say those fans who had ponied up good money were NOT happy! We were not allowed to go up in it during the tour (the only disappointment).  Well, we couldn’t go on the track itself either, since the Porsche club was having an event and we were in a non-Porsche van, so I guess there were two disappointments….

The last shot in this post is looking down toward the main straightaway and start/finish from up at Turn 1.  Race vehicles run counterclockwise around the track so they would be coming towards me from this vantage point.

Next we go to the main grandstand and then cross under the track to the infield (see CoTA Post 2 of 2).