Sunday I rode the street car downtown and made a variety of side trips.  Rather than getting off in the middle of town I rode it as far west as I could.  This gave me a chance to see a part of town that I hadn’t seen the day before as well as part of the waterfront (Toronto is situated along Lake Ontario) to see if perhaps I’d want to spend more time there later in the day.  I made note of the locations of a few things I wanted to take pictures of and got off the street car a few times as I rode back downtown.

One of the places I spent some time at was a large plaza with a reflecting pond and a huge Toronto sign (no A holes here…).

Every time I rode the street car downtown I passed right by this ornate municipal building, Old City Hall: 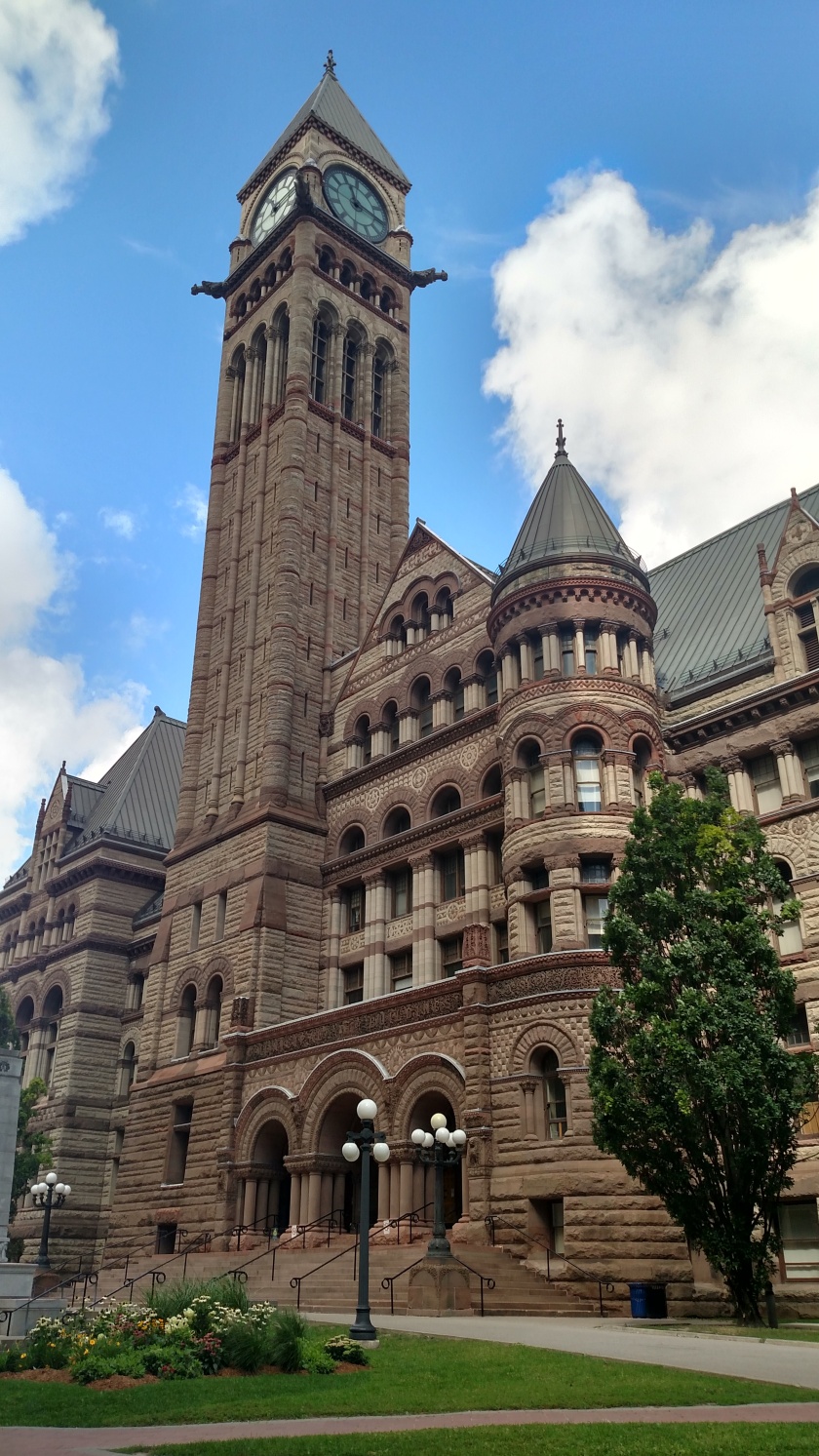 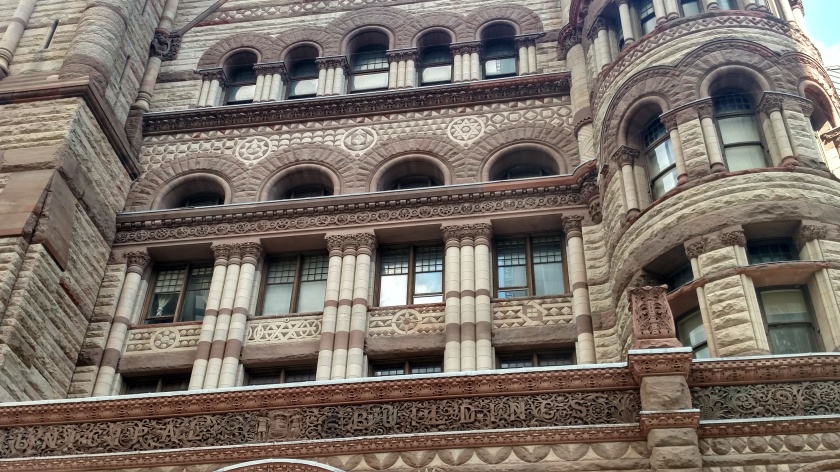 Next I went inside Eaton Centre, a multi-story indoor shopping mall located about a block away from Old City Hall.  I only went in to use the bathroom (in Canada they call them washrooms) and to find some free wifi.  While there I took notice of yet another occurrence of a phenomenon which I have seen in shopping centers in various places.  This was the scene at the Apple Store:

Elsewhere in the same complex (and it wasn’t even listed on the Directory) was the Microsoft Store:

Pretty sad, especially when you consider that most of the people in the second photo work there.

In the same “feast or famine” vain, when I was down near Union Station on Sunday I noticed that all the rental bicycles were safely in their little storage slots:

That photo was taken around 1245pm.  Later in the afternoon, at around 645pm, this was the scene at a similar rental bicycle site next to the University of Toronto: 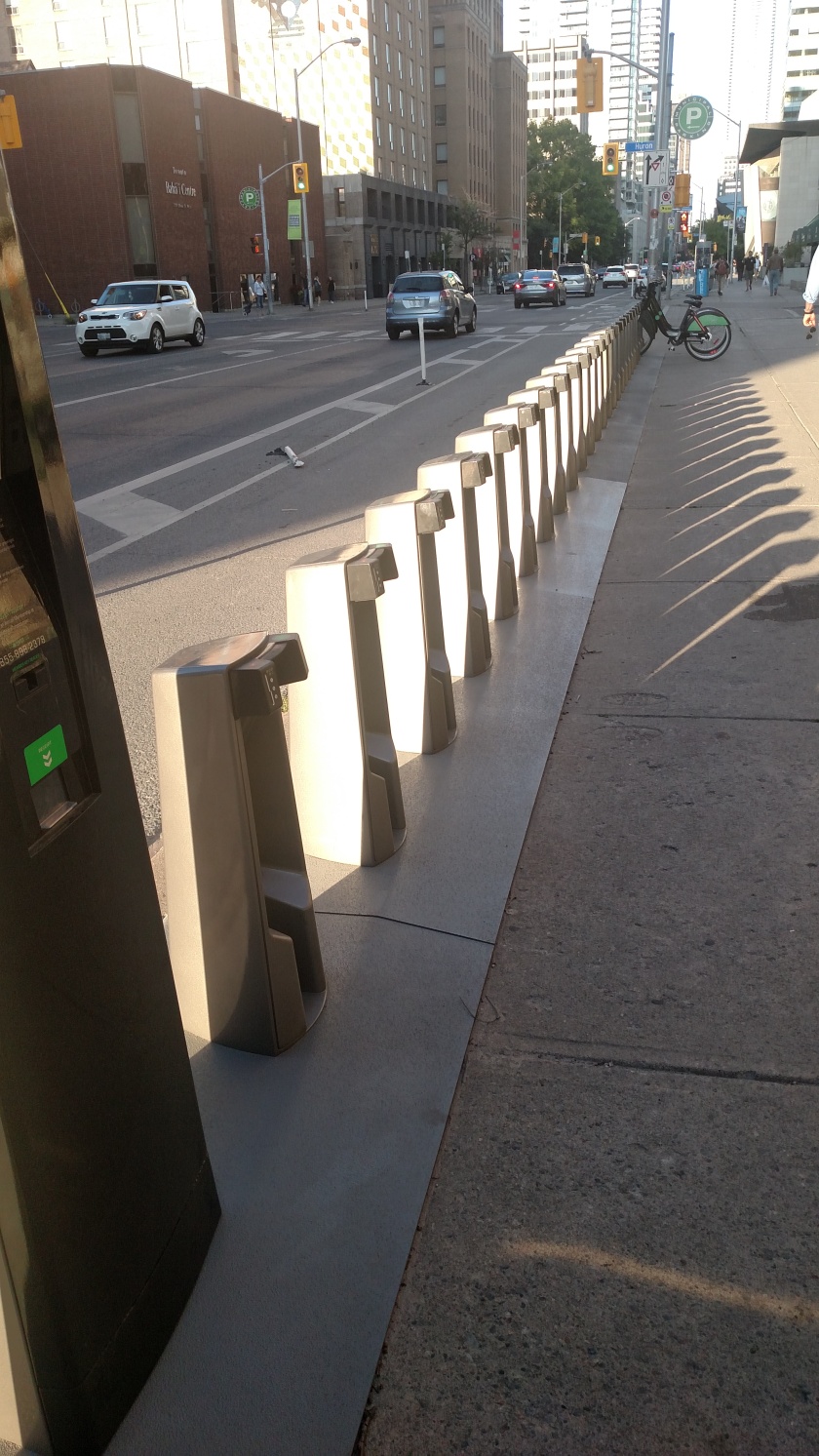 I had walked up north of the main downtown area to check out some of the many museums in that part of town to scope out the exteriors for possible photos on Monday.  I wanted to see how the various buildings were situated so I could determine the best time of day to take the photos.  I had seen a photo of this next object online a few weeks before getting to Toronto and since I was roughly in the neighborhood I decided to go see it for myself.

“Condo Man” has created a bit of a buzz in town, with a debate raging as to whether it is art or advertising.  It is in front of a building being converted to condominiums which is also home to the construction company doing the work.  The larger-than-life man is holding an office tower. 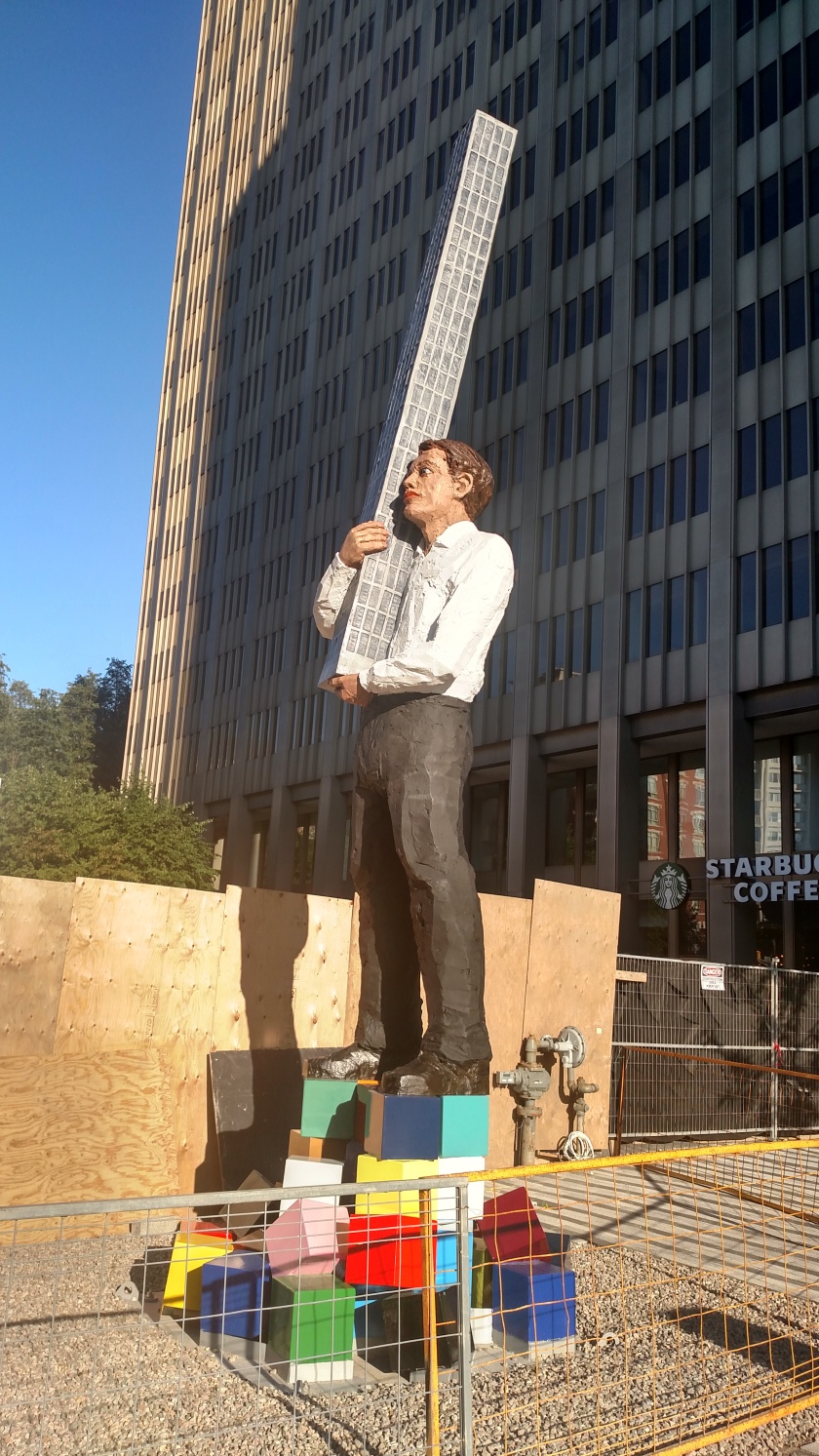 I couldn’t find any verbiage promoting anything and may not have even taken notice of it if I hadn’t read about it online.

One of the museums I had walked up to this part of town to see was evidently hosting some kind of after-hours gala as there was a large crowd of “pretty people” gathered outside the entrance: 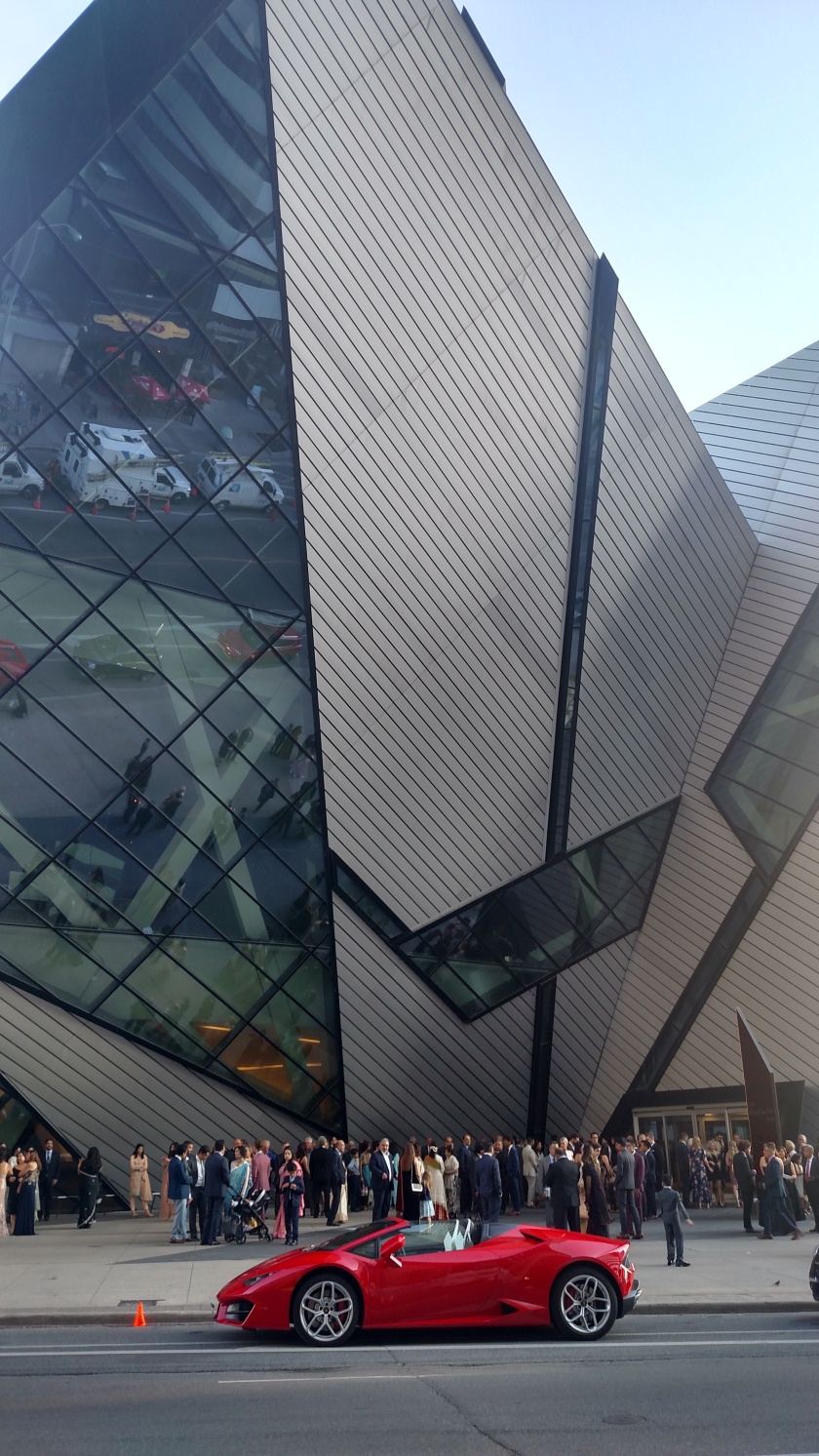 Just up the street from the museum (which you’ll see more of in my Day 3 post) is the University of Toronto – St. George campus and there was a nice view of the city skyline as I looked out over their football field: 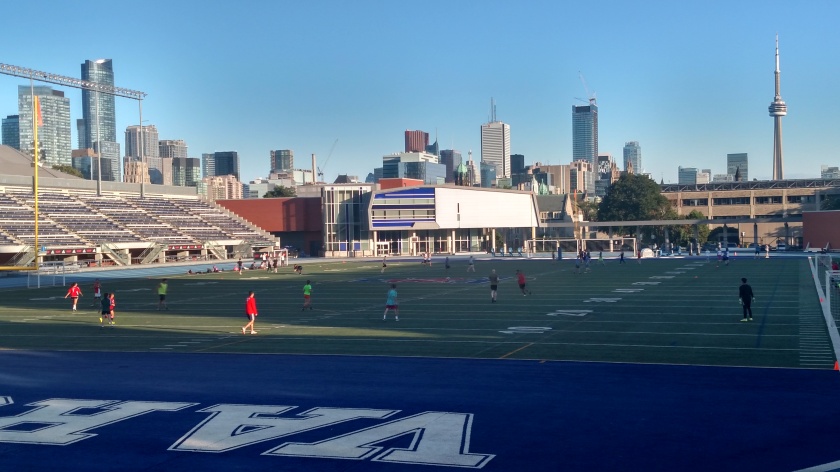 As I walked back down to Queen Street to catch the street car back to my Airbnb I had this view of the CN Tower, reflecting the late afternoon sun: