The strangest thing happened on Saturday.  It rained.

I haven’t seen measurable precipitation since May 20, the day my nephew graduated from college in Colorado Springs, Colorado.  After that Monday morning ceremony we had lunch, then went to the Garden of the Gods park.  Late in the afternoon Sam looked at the mountain complex which includes Pikes Peak and said “We gotta go, it’s going to rain” and after we got to the car, it did.

Yes, it spritzed on me the day I arrived in Eureka, California but that was only because I had just had the car washed after my “off-road” road trip to The Lost Coast.  And yes, a few big drops fell on me as a small storm tried to overtake me as I retreated from the Tule National Wildlife Refuge back to where I was staying in Klamath Falls, Oregon, but that was only enough to put large spots in the dirt and dust which had accumulated on my car while I was getting bird pictures.  Saturday was the first steady, widespread rain I’ve seen in over two and a half months (and it was probably because I had the car washed when I arrived in Portland on Thursday).

This all took place around noon Saturday and fortunately I had been at the Portland International Raceway track all morning getting pictures of and watching the morning practice and qualifying sessions for the various divisions.   I left when they took their hour lunch break (to give the corner workers and other track personnel a chance to take a break from their duties).  Racing would resume in the afternoon, even though the steady rain was relatively short-lived.  Road course racers have rain tires (with grooves) so a little moisture doesn’t stop them, it only slows them down a little…

Here are some shots I got Saturday morning before the rain arrived: 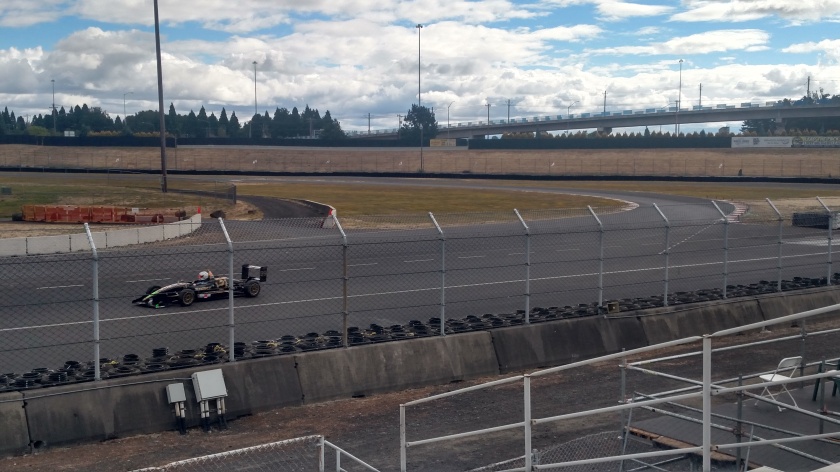 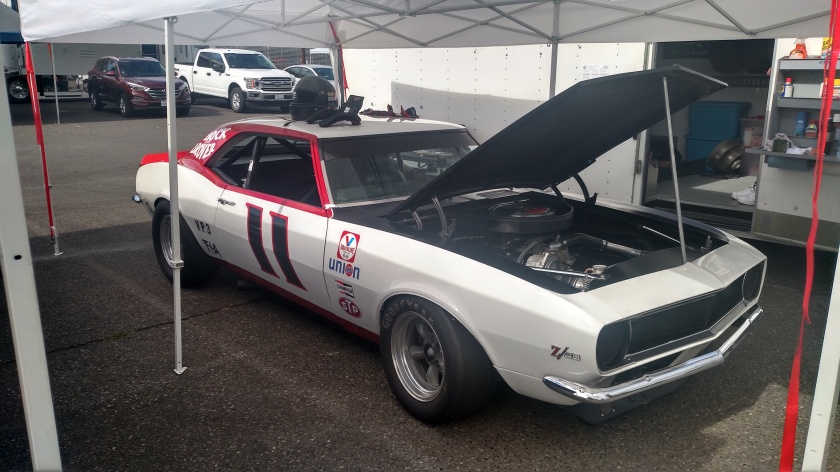 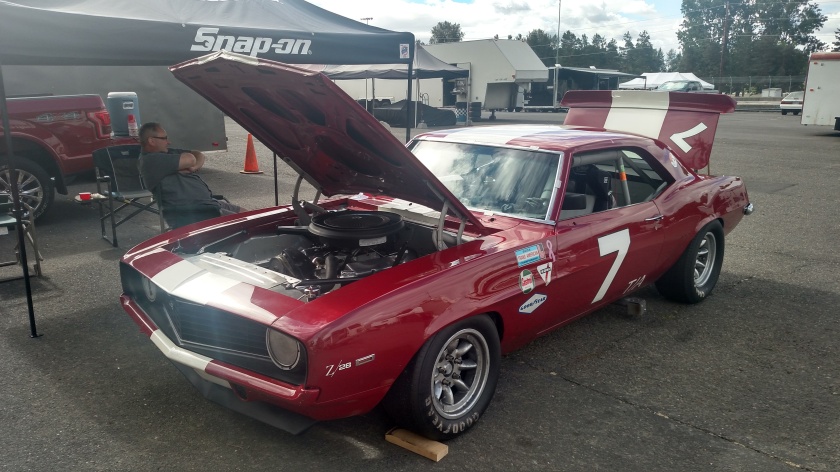 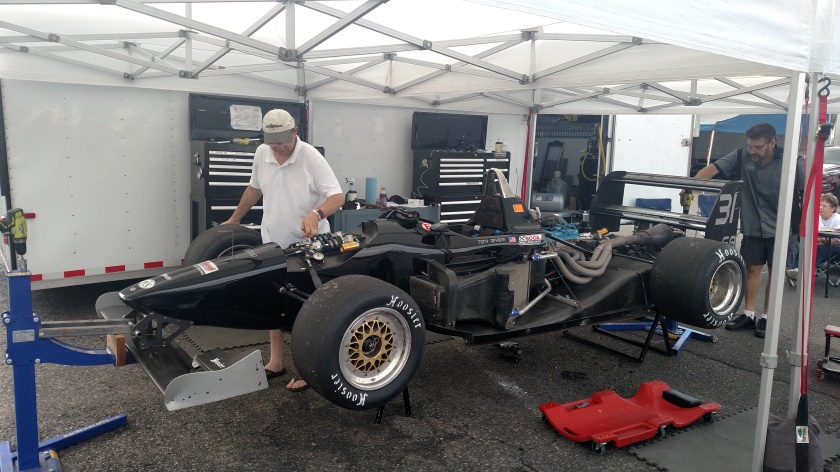 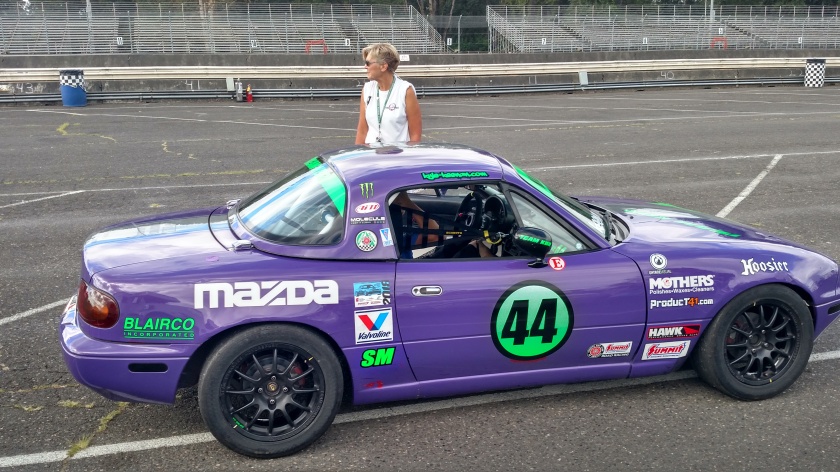 This next car, the blue #4, won it’s National Championship at the year-end “Runoffs” held last fall at Indianapolis Motor Speedway.  When my friend raced back in the 80’s the Runoffs were always held at Road Atlanta in Georgia, but in fairness to competitors in other parts of the country they started moving them to other venues around the country.  In 2019 the Runoffs are coming to Virginia International Raceway, only about an hour north of Durham! 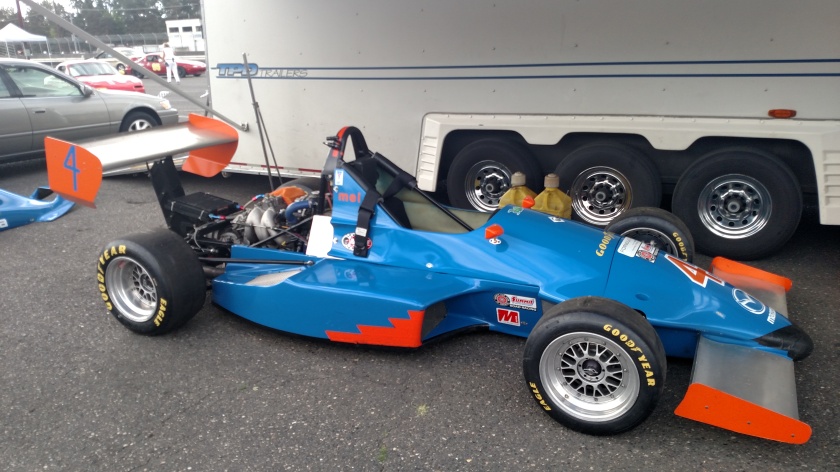 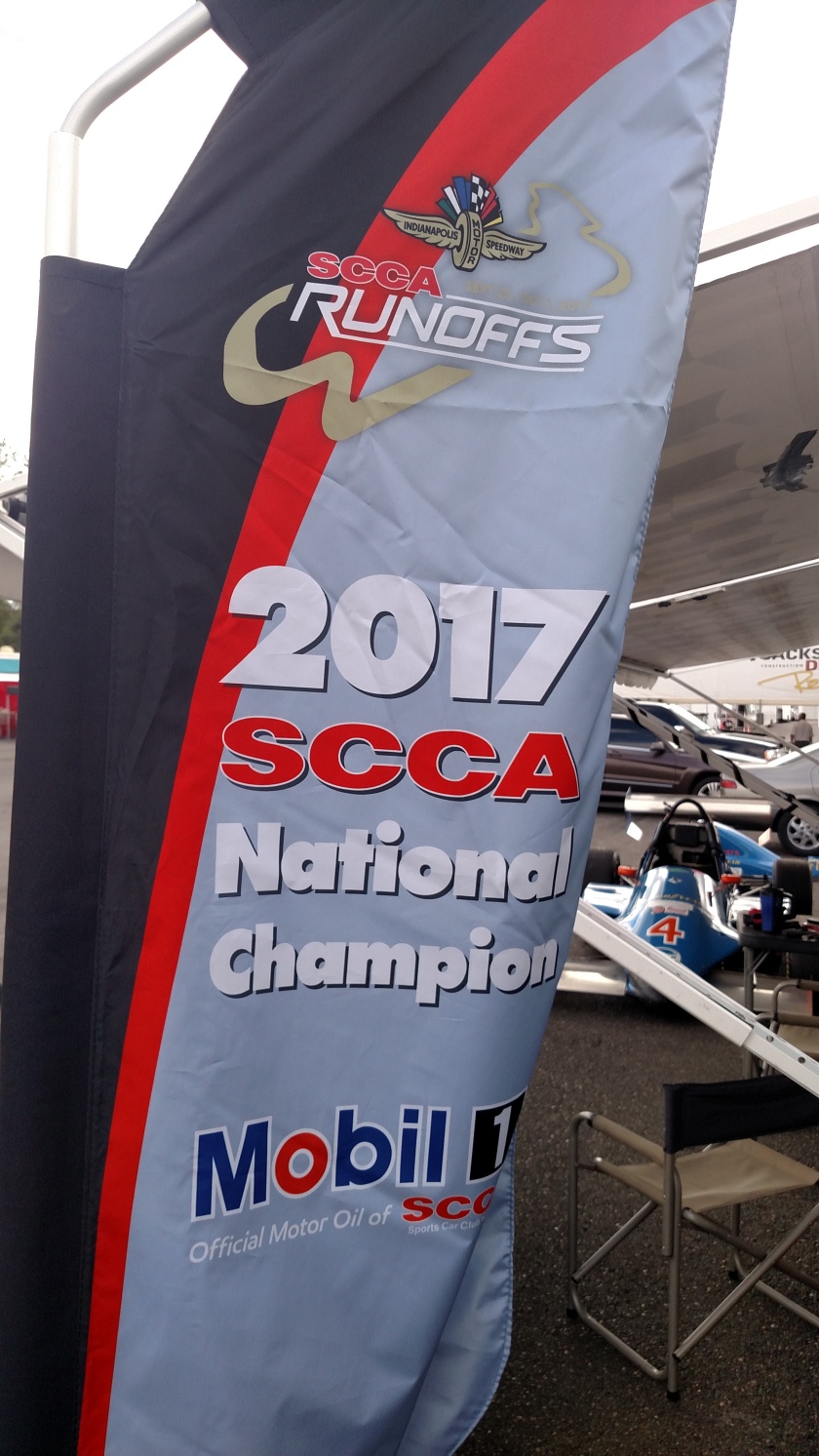 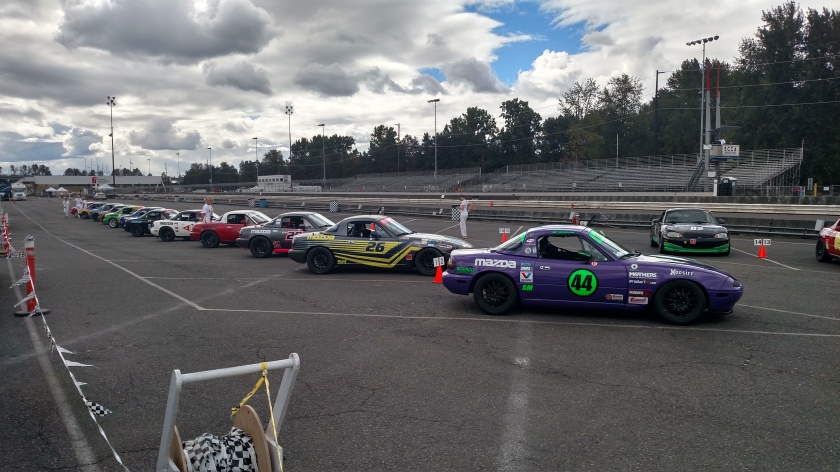 Here is an Alfa Romeo (foreground) and an MG (behind it) which were competing in the VP (Vintage Production) class: 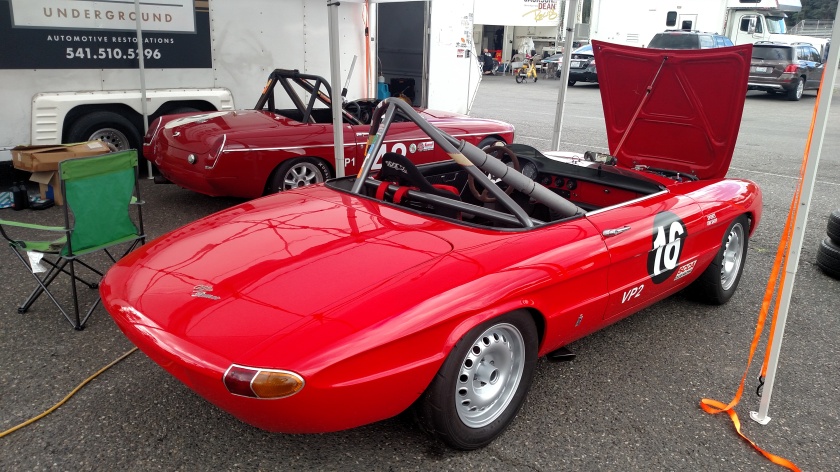 Here is a really big chair for one of the drivers!  I later saw two teenage lovebirds snuggling in it and was tempted to take a picture but thought I’d leave them their privacy. 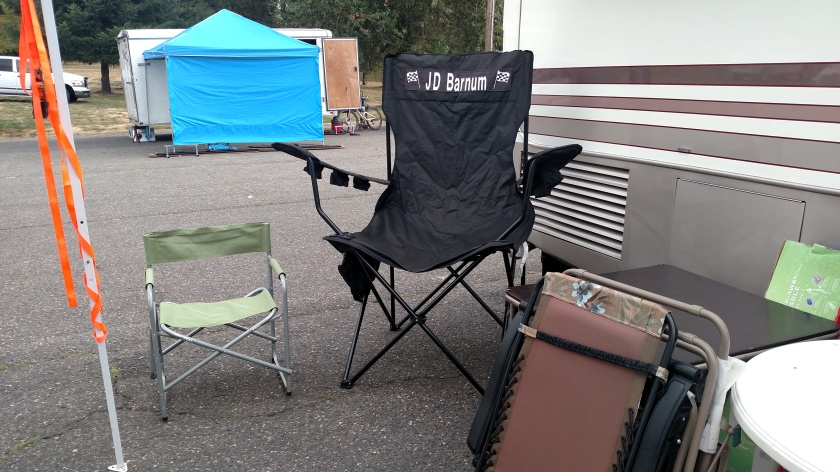 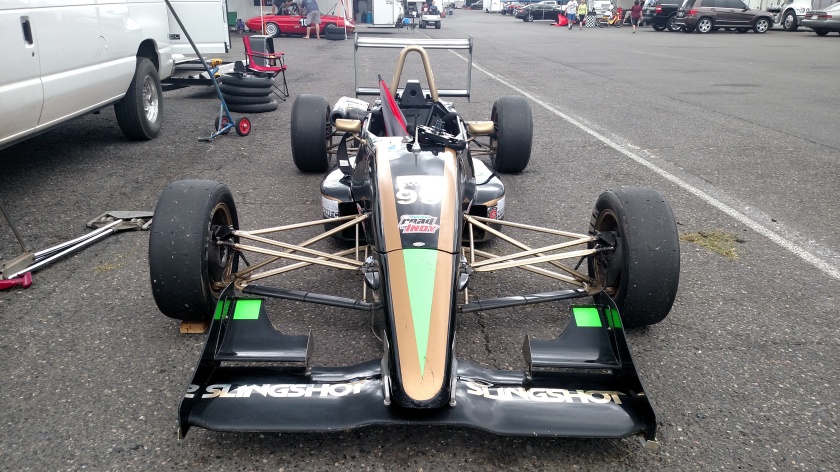 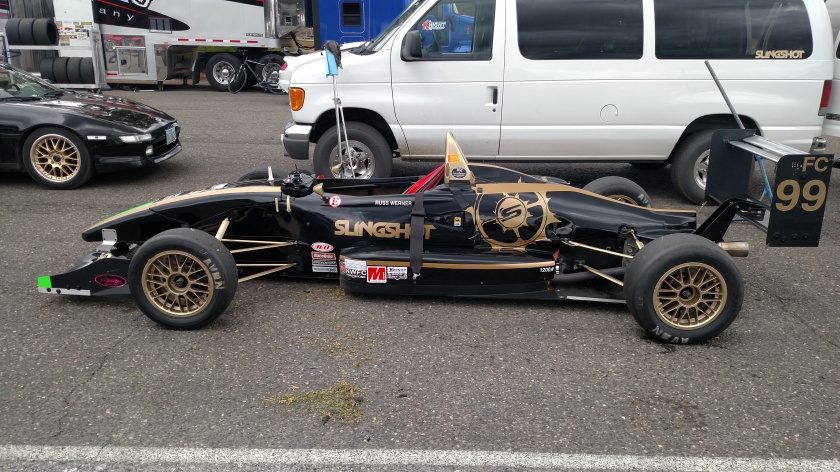 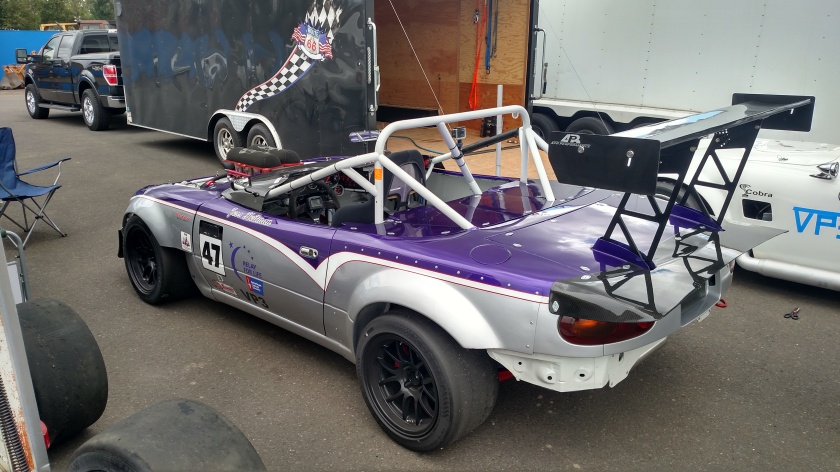 I spent some time in a grandstand near the end of the main straightaway overlooking the “chicane,” a zig-zag type curve which forces cars to reduce speed before entering the first main curve.  The orange corvette below later suffered mechanical problems and was put in the trailer to take back to the shop. 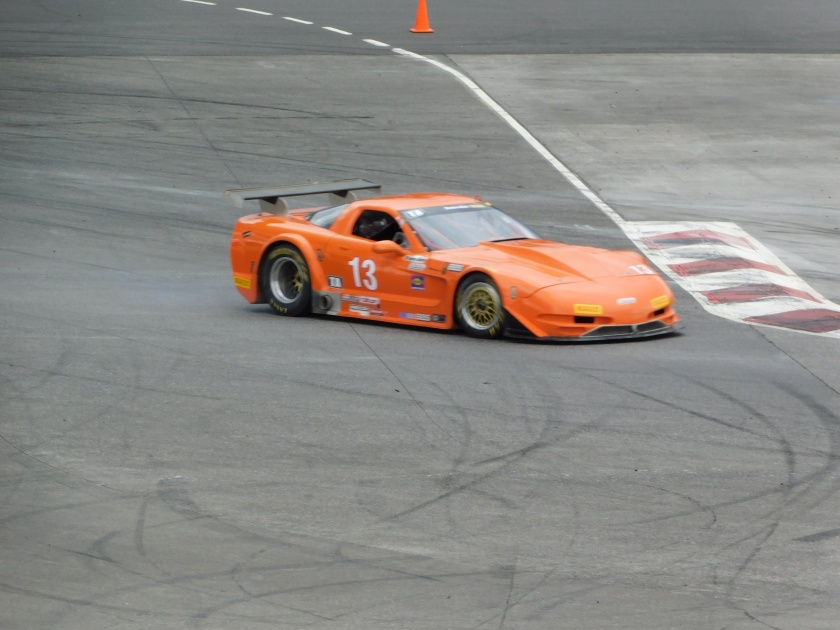 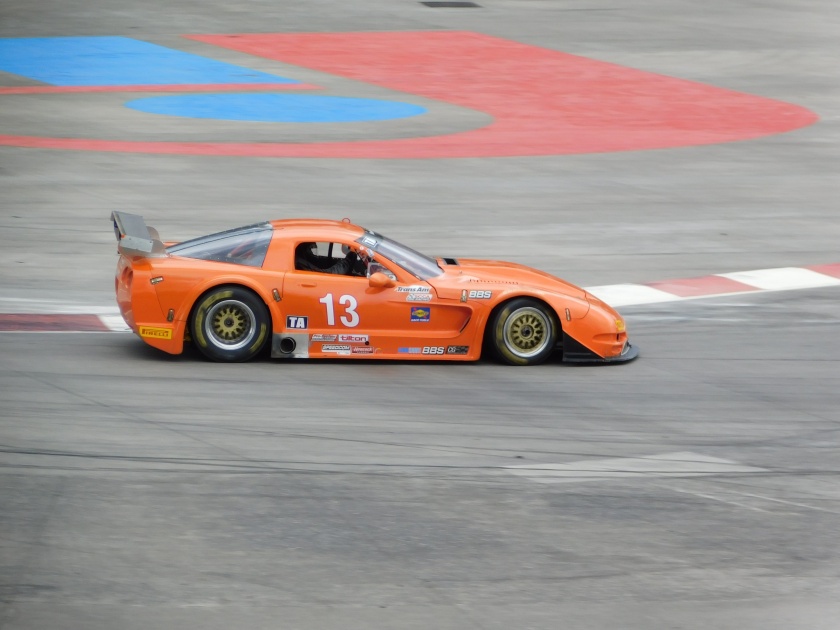 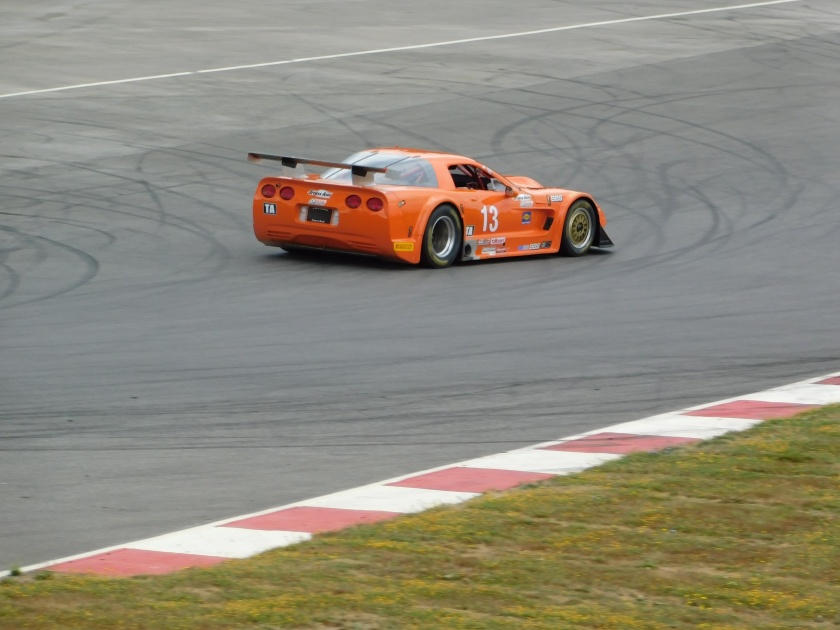 The car below wasn’t so lucky.  It broke down on the track and needed to be towed back to the paddock area via a strap attached to a pickup truck.  There are tow trucks and flatbeds available for more severe wrecks but hopefully most competitors only need some pulling assistance if they break down. 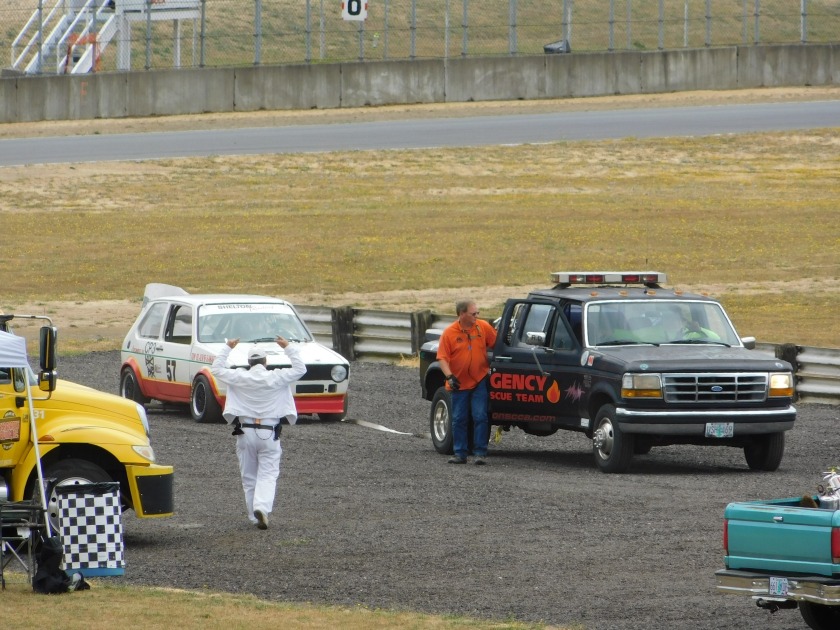 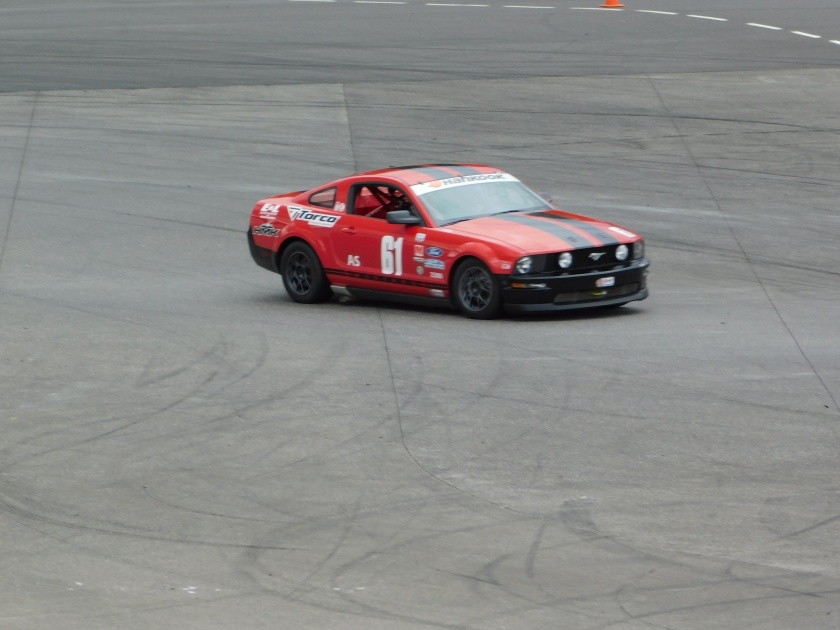 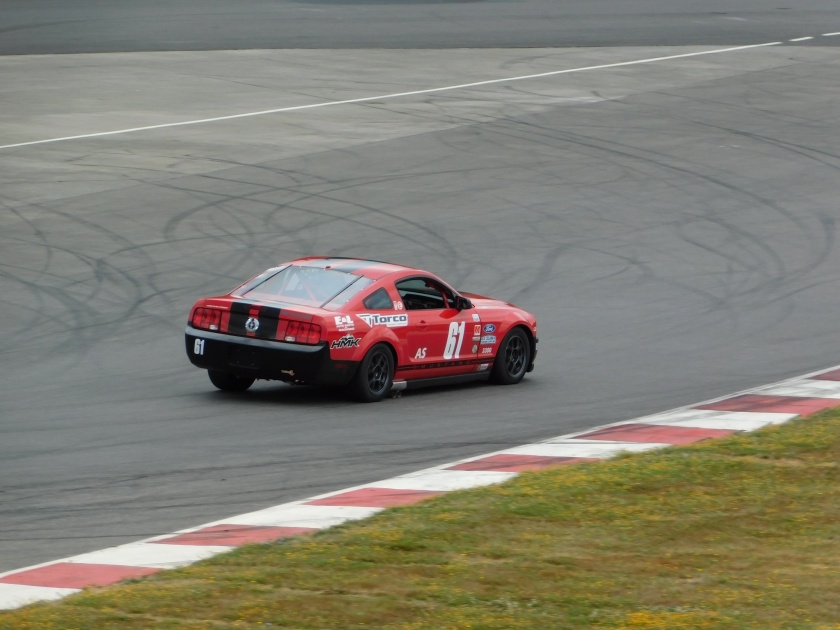 I actually spent most of Saturday and Sunday at the track, reliving memories of the days I used to go to SCCA events with my friend from Pennsylvania.  I did go to an SCCA weekend at VIR up near Danville, VA a few years ago but now with my big trips during the summer I’m not there when they hold them.