Of course Ottawa is the national capital of Canada and I spent most of my first day in the city exploring almost everything BUT the Parliament complex.  I lucked out because the weather on my second day downtown was much better for photographs and I took lots of them.  I’m going to break them up in groups, but first let me show you a map and give you a preview of what you’ll be seeing.

I know I could crop the photo above to center on the logo but please take note of the building on the right (with three flags flying above it) as it will be discussed in more detail later.

Here is the lay of the land:

The main Parliament building is “Centre Block” on the map above and it is flanked on either side by the “West Block” and “East Block” buildings.  The area where the words “Centennial Flame” appears on the map is a large, open grass lawn.  This is where the formal “changing of the guard” ceremony occurs daily.  I did NOT attend this ceremony.

To the left of the main buildings on the map are the Confederation and Justice Buildings.  Across the street, and below the word “Street” in Wellington Street, is the office of the Prime Minister.  The “L” shaped building above the two T’s in the word “Ottawa” at the bottom of the map will be shown and described later but I haven’t been able to determine the exact name of the building.

I will be posting photos in groups, some focusing on a specific building and some which will cover multiple buildings.

And before I begin posting photos I must confess that I am an idiot and spent more time than I care to admit taking photos from the right side of the map, thinking it was the only view of Parliament I might get.  I was in Major’s Hill Park and I admit that I wondered why the things I was seeing were somewhat distant and weren’t a little more symmetrical.  It wasn’t until I pressed some local people as to why I couldn’t find the Visitor’s Information Center where it was shown on my map that I discovered I wasn’t in front of Parliament but was off to the right side.  Oops.  And of course the Information Center was exactly where it was supposed to be, across from the front of the Parliament complex.

The right side of the map shows Major’s Hill Park in the upper right corner, the Fountain Château Laurier hotel in the lower right corner and the Rideau Canal and Ottawa Locks flowing between them and the Parliament complex.

This was my first look at Parliament from Major’s Hill Park:

The view below shows Lt. Col. John By overlooking the Rideau Canal which flows between where his statue is located and the Parliament buildings. 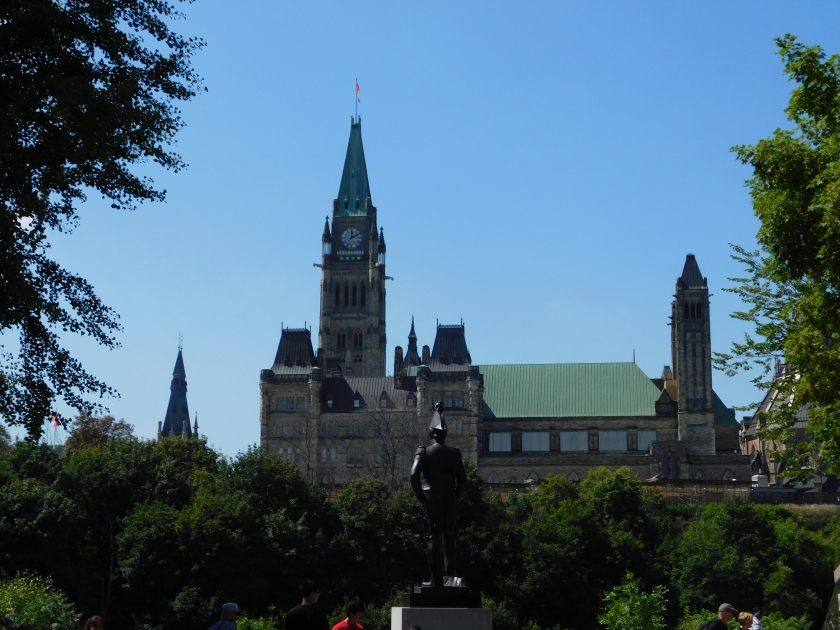 And this is a slightly different view from the park showing some of the Parliament buildings.

Not too shabby but as you will see this is much more impressive when viewed properly from the front!