Friday afternoon I arrived in Aurora, Colorado, a suburb on the southeast side of Denver.  After stops in Boulder and Westminster, which are to the northwest and north of Denver respectively, I drove through considerable pre-rush-hour traffic to get down here and decided that I don’t like city driving after so many months of driving scenic back roads.  I decided to stay close to Aurora over the weekend.

Lucky for me Cherry Creek State Park is only about a 5-minute drive away.  I discovered it Saturday morning and spent a good part of the weekend there.  It is huge, over 5 square miles, and contains an 88o acre reservoir.  Pelican Point is one of the many areas surrounding the lake which has a parking area and picnic tables for enjoying the scenery.  You can probably guess what I found there… 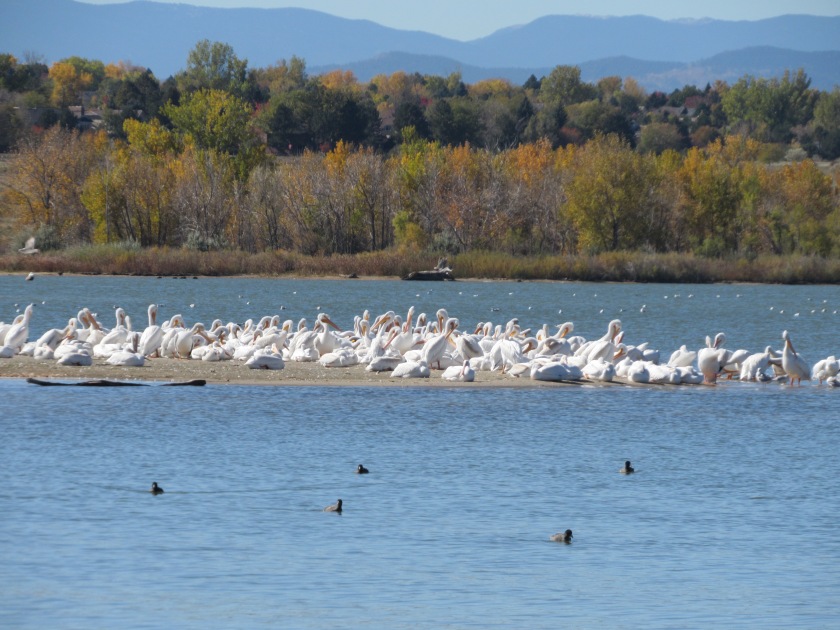 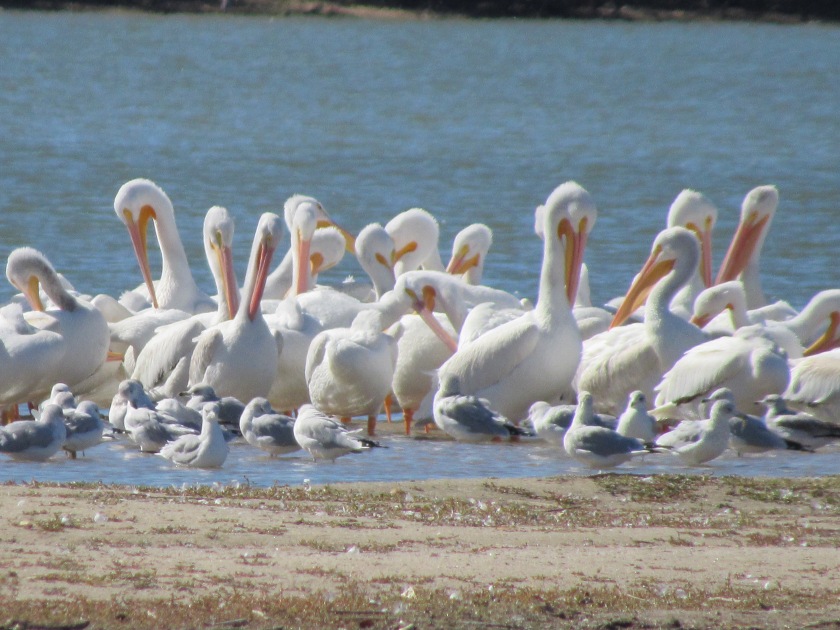 I had heard about American White pelicans when I was up in southern Oregon in late July, although I didn’t see any (the picture I posted on the blog was from the internet).  These birds are HUGE, much bigger than the brown pelicans I am accustomed to seeing at the Outer Banks in North Carolina or up in Virginia Beach.  Brown pelicans dive from the air to catch fish, whereas American White pelicans fish from the surface, forming a circle, or “net” while floating on the water and flapping their wings to attract fish, then pluck them out of the water when they get within their circle.  The white pelicans I saw over the past two days often fly in large groups, high over the lake, as opposed to brown pelicans which generally fly solo, or in small groups, low and parallel to the shore of the ocean.  There were seagulls, ducks and geese on the lake as well, but the pelicans were the star of the show.

Saturday I also saw a bald eagle flying near and over the lake on the opposite shore from where I took these photos.  It had become VERY windy in the afternoon which made it quite nippy compared to the calm, sunny morning.  I had gone back to my Airbnb mid-day Saturday and neglected to bring the digital camera with me when I returned to the Park in the afternoon so I didn’t get any pictures of the eagle but it was impressive to watch.

Saturday I pretty much drove and walked around different parts of the Park.  I found a radio-control aircraft field in one part which had a handful of pilots flying planes (no helicopters) Saturday morning.  It had gotten way too windy to fly in the afternoon and they were all gone, so I was glad I spotted the eagle nearby.  Sunday morning was warmer and calm and there were lots of guys flying so I spent most of the morning there watching them.

I enjoyed spending much of my last two days in Colorado at the Park getting my fill of fresh, clean Colorado air.  Monday I start heading east and will be in central Kansas for my next stop.  I’ll also drop down to about 1,500 feet elevation for the first time since mid-July.

As you may have noticed my posts have been dwindling in number the last few days.  I went back through my recent pictures and decided I had pretty much posted the good ones already.  I am nearing the end of the “seeing new things” phase of my trip and now I’ll be largely just traveling from point-to-point until I get to my youngest brother’s house in northeast Ohio on Friday.  I’ll then be spending time with family and friends until I get back to North Carolina just in time for Halloween.

I already know the one thing I wanted to see in central Kansas is closed for the season so I’ll have to wait until next year to try again.  I will have an interesting photo op and story tomorrow, though, so I’ll make at least one more post tomorrow night.  After that it may be slim pickin’s until I get back home.  I plan to resume posting in early November with pictures and stories from past trips.  There won’t be as many pictures, and all will have been taken with my smartphone camera, but I hope to show y’all some interesting places and things from the past two and a half years.  We’ll also see how good my memory is!

So you get a short break from posts until early November.  For those of you fairly new to the blog, I’ve made over 500 posts since early July so there is quite a bit of older material to view.  The easiest way to see older posts is to use the calendar on the right side of the Home page when you first bring up the website.

And of course over the winter I’ll be planning next year’s extravaganza to California, the Northwest Coast, and Alaska!  That trip should start around May 1, 2018.