When I discovered on Wednesday that I wouldn’t be able to go through Rocky Mountain National Park as planned I had to find another way to get to Breckenridge.  I decided to go down the “Million Dollar Highway” towards Central City, a scenic route which I had driven earlier in this trip.  This gave me the opportunity to revisit two places which I’ve made blogs posts about previously.

First, I drove past the site where AAA Motor Club had to perform my “extraction”.  For those of you new to the blog, you can find that post by going to August 20 using the calendar on the Home page, or search for “Delay of game”.  There you’ll find the amusing JohnBoy story of how I got my car stuck on a roadside pullout.

As I passed the site on Wednesday I discovered that the highway department had put down some old road material to help ease the severe dropoff which contributed to my getting stuck.  Not an ideal fix (hey, budgets are tight) but at least they made an effort and it should help others from finding themselves in the same predicament I did.

And further down the road I passed St. Malo Catholic Church (blog post same date as mentioned above), which now had a mountain topped with snow as a backdrop.

Ever since I was in high school I’ve wanted to see the Atomic Clock.  I can’t always remember my family member’s birthdates but I knew from memory that if I called 303-499-7111 I’d hear a ticking sound and every minute a voice would declare the precise “Coordinated Universal Time”.  Go ahead, try it…  Now that we’re in the Internet age you can also find the exact time at http://www.time.gov.  And just as a heads up, TV network evening newscasts (ABC, NBC, CBS) always start at precisely 630pm straight up.

This is the NIST-F1 Cesium Fountain Atomic Clock located at the National Institute of Standards and Technology (NIST) in Boulder, Colorado.

Well, I’m taking their word for it that this is it.  When I showed up at the sprawling campus of the a huge US Department of Commerce facility where various labs are located I turned where my GPS told me to turn and ended up the parking lot of a nearby business.  I went inside to ask if I should move my car (their parking lot wasn’t very crowded) or leave it for about a half hour.  The receptionist said it was fine where it was.  I walked over to what appeared the main building.  It was locked, and it appeared that security was tight.  Two guys were apparently coming back from lunch and directed me to the nearby Visitor Center, maybe a quarter mile away.

The Visitor Center consisted of three large security guards seated behind computer screens.  One of them looked up the number for the Public Relations Officer for the department which would involve the Atomic Clock.  Apparently tours can be arranged in advance in some cases but they frown on walk-in’s.  My phone wouldn’t work (5 bars but no connection.  It might have been blocked so as not to affect the labs?).  I really wasn’t expecting to get very far so I just gave up. 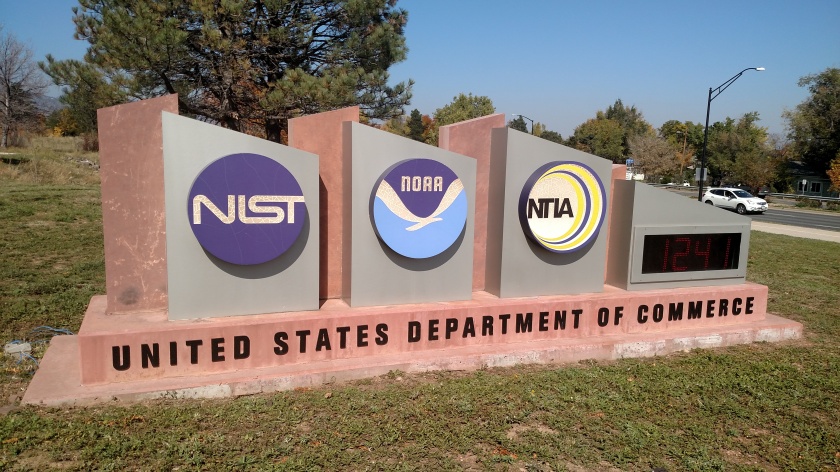 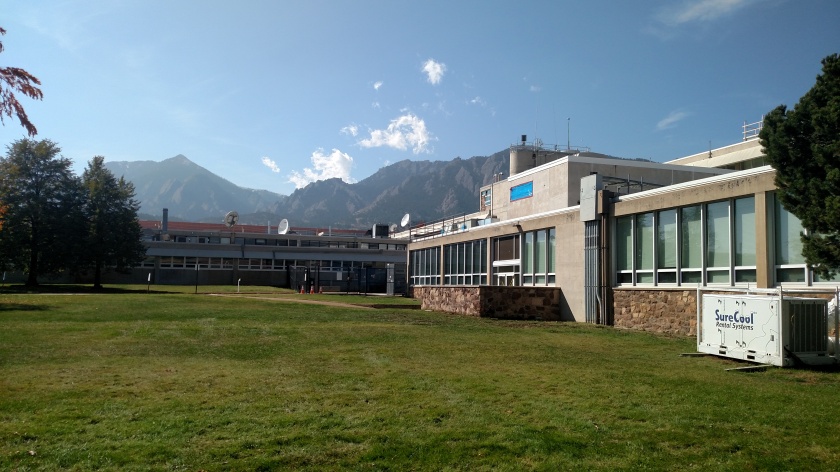 This is an aerial photograph of the entire facility.  The part I saw is in the extreme lower right of the picture.

The current clock was designed by Steve Jefferts and Dawn Meekhof of the Time and Frequency Division of the NIST Physical Measurement Laboratory (try to fit all that on a business card!).  It won’t gain or lose a second for 60 million years, and they’re still improving it!  It is the main source for accurate time in the United States.  The Defense Department also relies on a similar clock at the US Naval Observatory in Washington DC which has a backup at Schriever Air Force Base outside Colorado Springs, Colorado.  Schriever is also the home of GPS (see the blog post dated August 24, 2017).

I’m a sucker for butterflies and hummingbirds.  When I discovered the Butterfly Pavilion in Westminster, Colorado (about 15 miles north of Denver) I had to stop and check it out.

Given that Halloween is fast approaching they had special exhibits of bugs and spiders.  I’m not much of a bug person, and definitely don’t like spiders, but this fish in one of their aquariums was one I had never seen before.

And now on to the main attraction.  Before going in to the large enclosure where the live butterflies and moths were I passed a display case with many deceased specimens.  Not knowing how many varieties of live ones I might actually see I thought I’d better get some pictures.  As you’ll see in the next post, though, there actually was a very good selection of live ones flying around.  I got pictures of as many as I could.  Some were just too quick and never stayed put very long.  Some were rather frisky and were perhaps pursuing love interests so I thought I’d respect their privacy.  It is a neat place and the kids (and adults) really seemed to enjoy it. 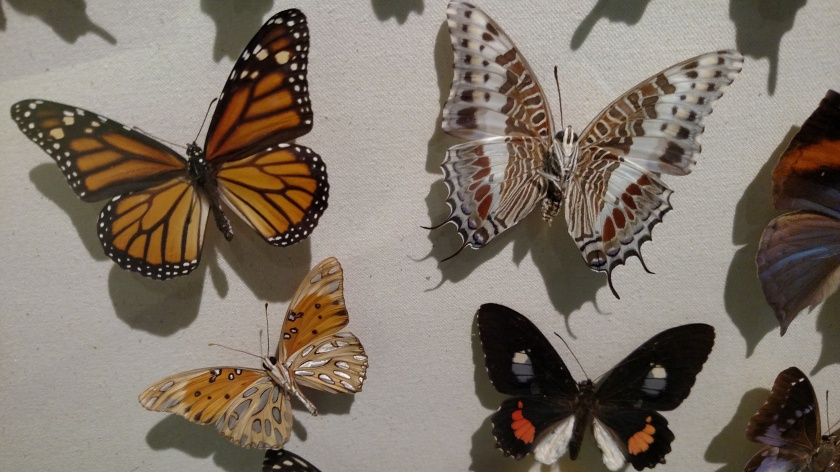 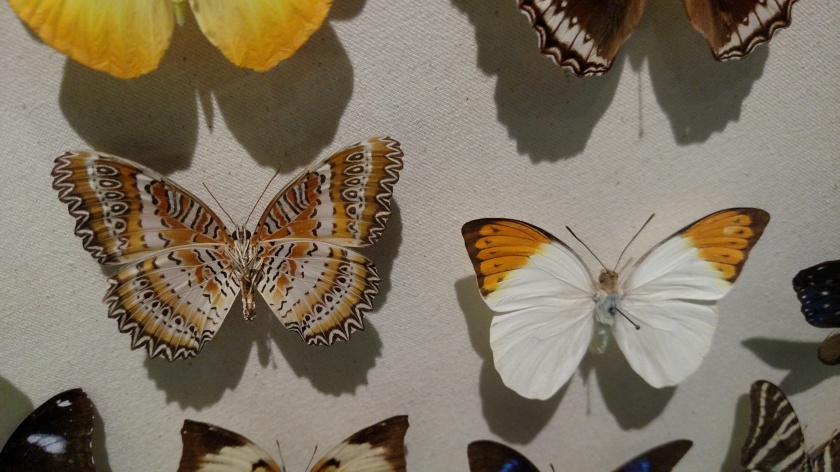 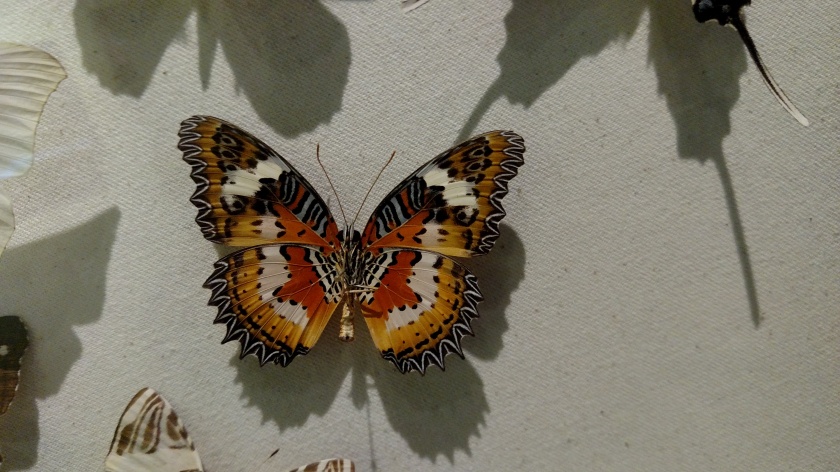 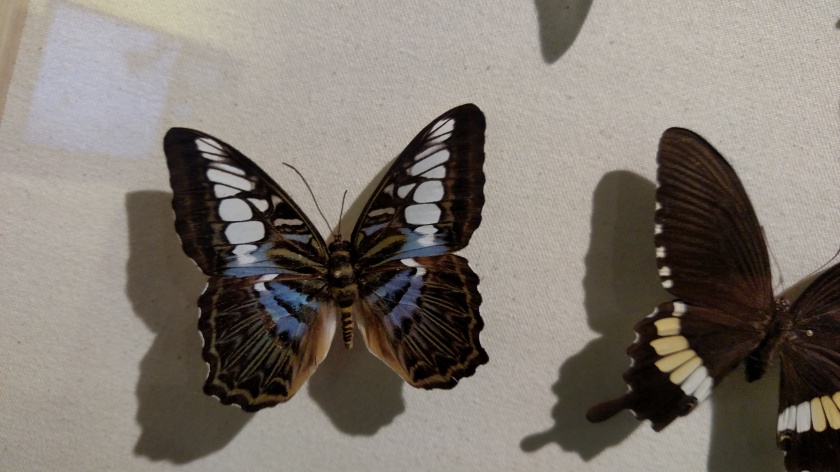 These butterflies and moths were all very much alive, flying around the large indoor enclosure at the Butterfly Pavilion in Westminster, Colorado (about 15 miles north of Denver). 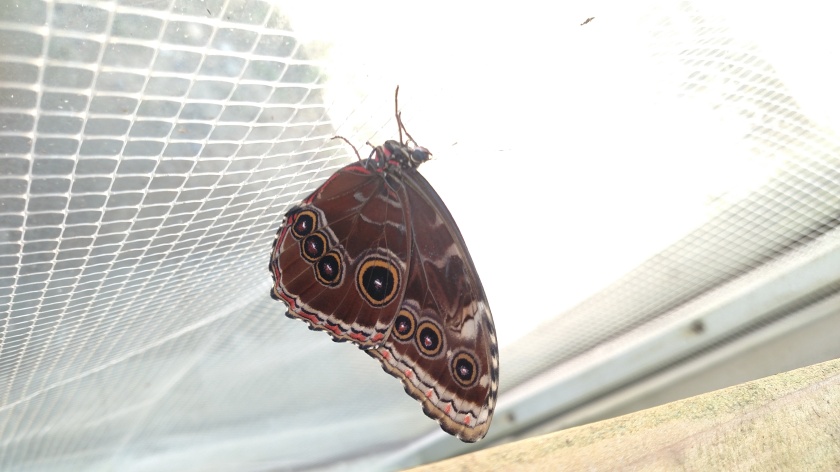 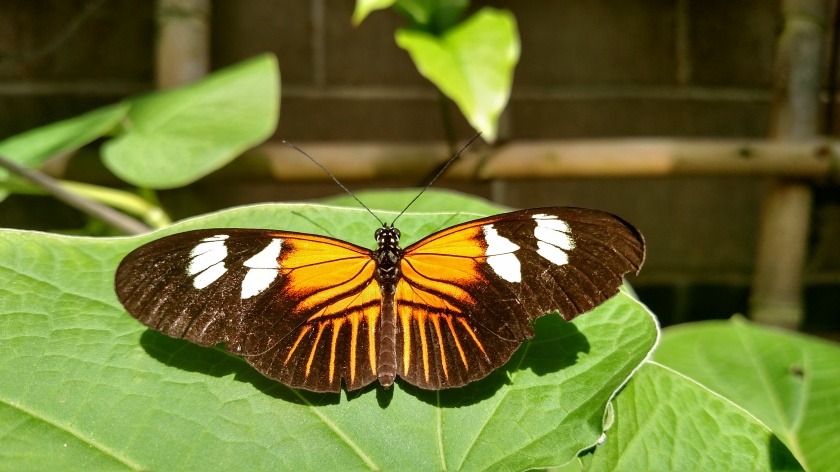 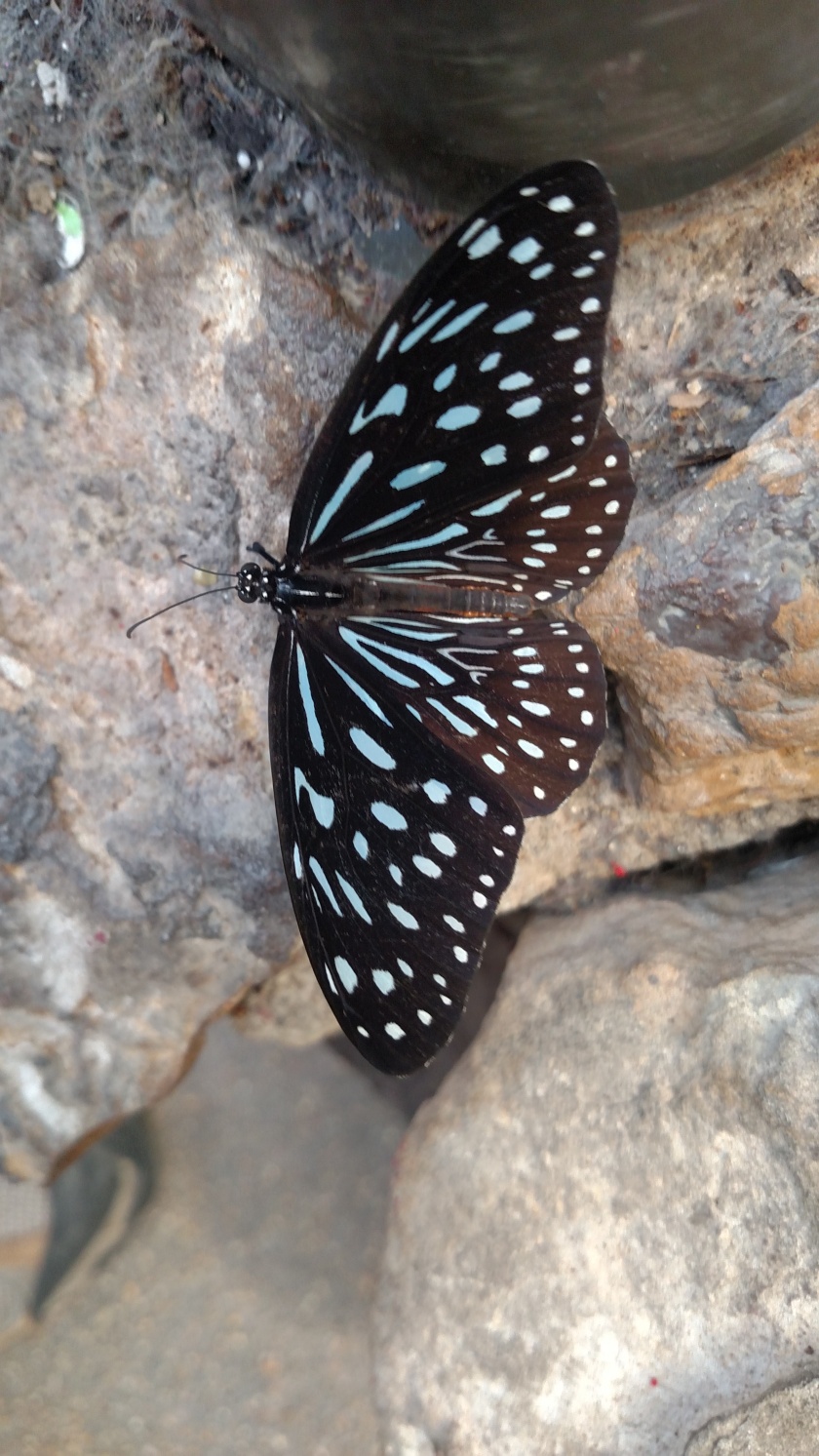 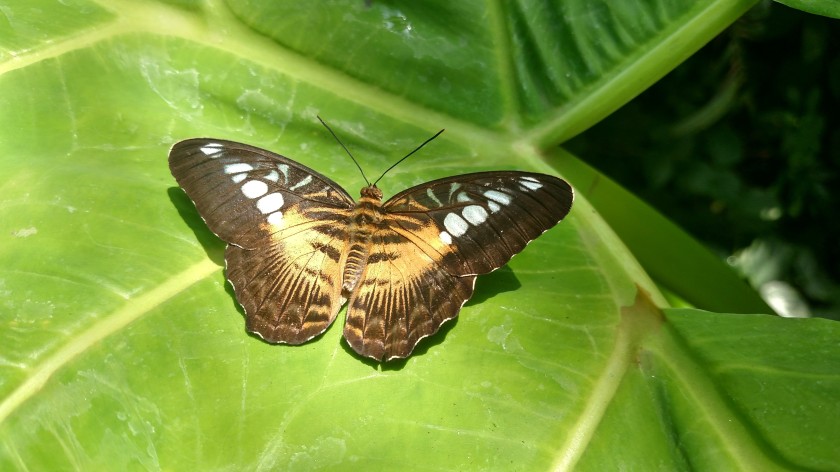 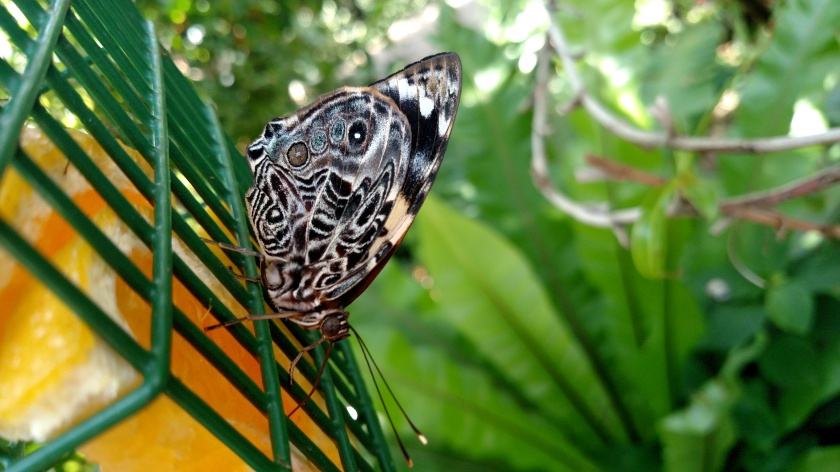 This next one was HUGE.  It is an Atlas Moth and never moved the whole time I was there.

And this was another large moth, an African Moon Moth.  If you look closely at the top you’ll see it’s antennae. 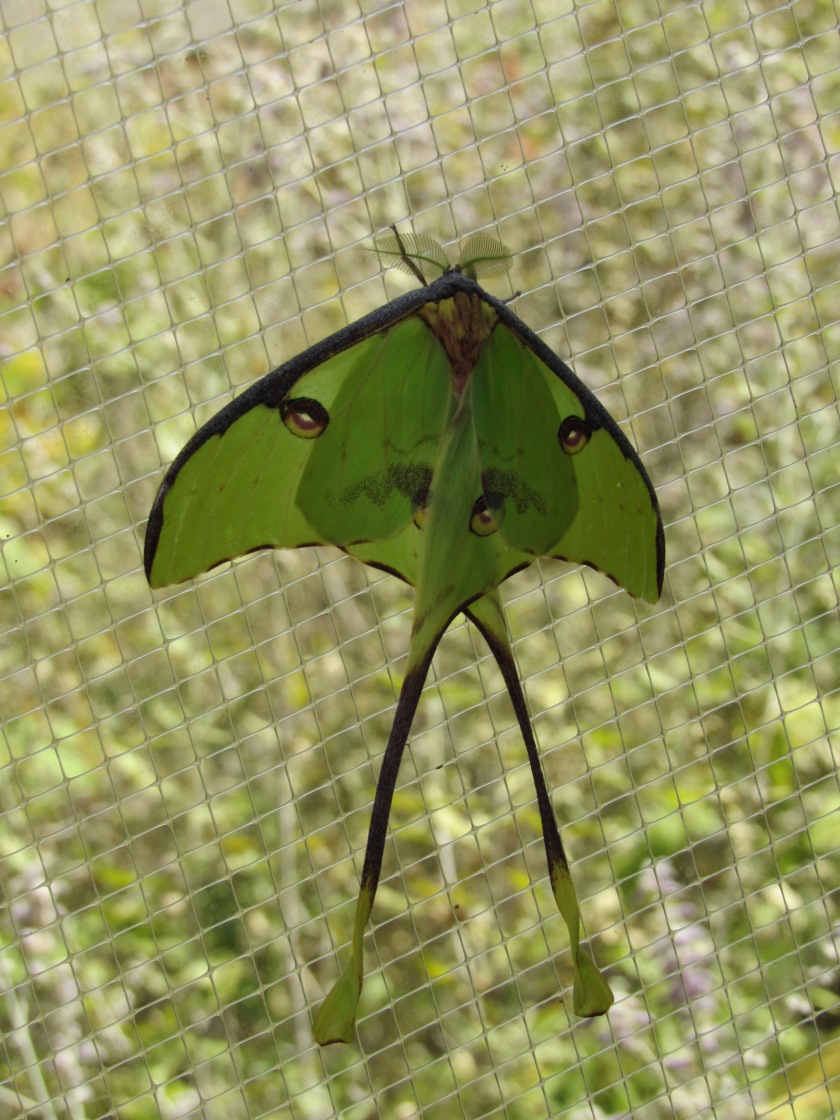