If you make a hard right as soon as you enter the Park from the south you will drive down a paved road to what is called the East Portal.  This is the point where water from the various reservoirs to the east go through one final dam and becomes the Gunnison River.  This is the water’s entry to the Park.

Driving down the road you drop from approximately 8,100 feet elevation (there was no phone service in most of the Park so my GPS apps wouldn’t work) to 6,500 feet in very short order.  This is achieved by a series of switchbacks and, in spots, a 16 degree grade.

When I was back at the River Gorge near Canon City a few days ago I met a couple from southern Louisiana and they told me about this road, otherwise I probably wouldn’t have known about it.

As you will see, it was worth the trip!

If you look closely at the photo below you will see a man fishing in the middle of the river.  This is actually a small river created by a “diversion dam” and is not the Gunnison.  This is looking away from the dam. 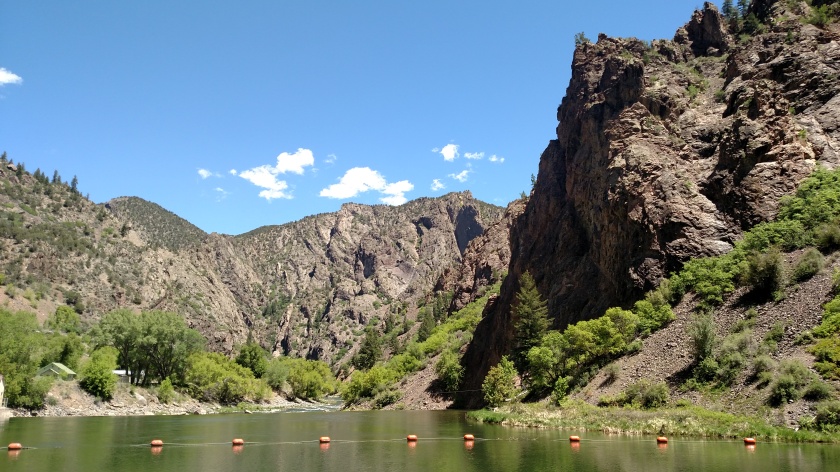 These are looking towards the dam.  There is also a tunnel under the dam but that is off limits to the public, hence – no photos. 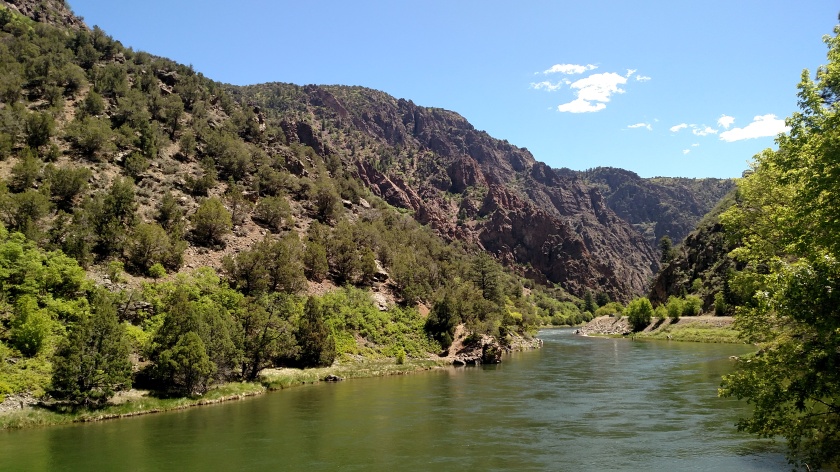 This is the first overlook when you enter the Park at the South entrance.  I posted pictures from the same vantage point last year (September 5, 2017).  If you go back and look at that post again (either using the calendar on the Home Page or enter “Black Canyon” in the search line) you will see that on that day the foreground was in the shade and the background was sunny.  It is pretty clear from that photo which this is called the “Black Canyon”.

Looking at the right side (partially shaded):

Looking at the left side:

This photo, which was in the Visitor Center, shows the area I was in Tuesday from the air.  You can see the road I traveled to get to the various overlooks, and you can see where the canyon curves to the left.

Here are various photos from the South Rim taken Thursday with my smartphone camera.  I’ll post some closeups, taken with the digital camera, in a few days when I’m up in Grand Junction. 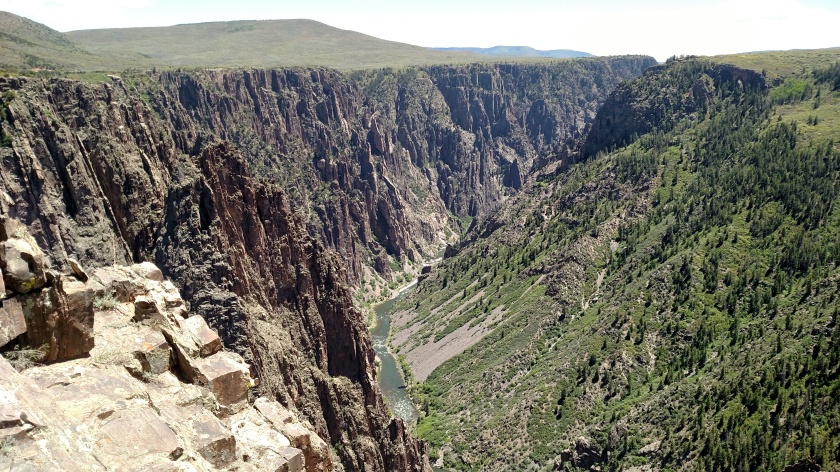 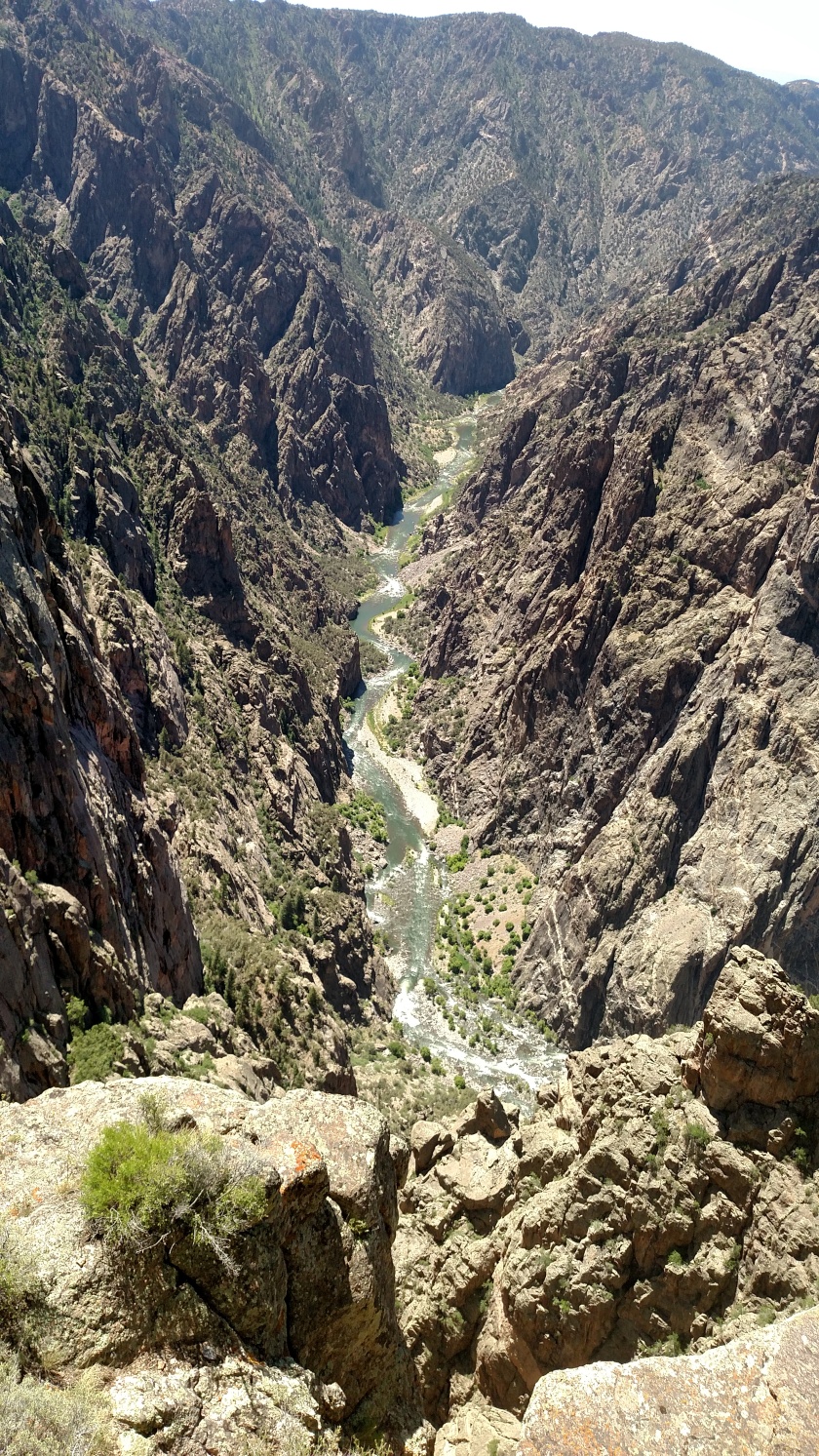 This is where the canyon really opens up as it continues west.  The only access is by hiking.

This formation, which can be seen from several overlooks on the South Rim, is one of the most photographed in the Park.  Because it is so big and I was so close, it was difficult to get it all in one picture.

At 2,250 feet it is the highest cliff in the state.  I zoomed in on some of the interesting “patterns” and will post them in a few days when I am in Grand Junction. 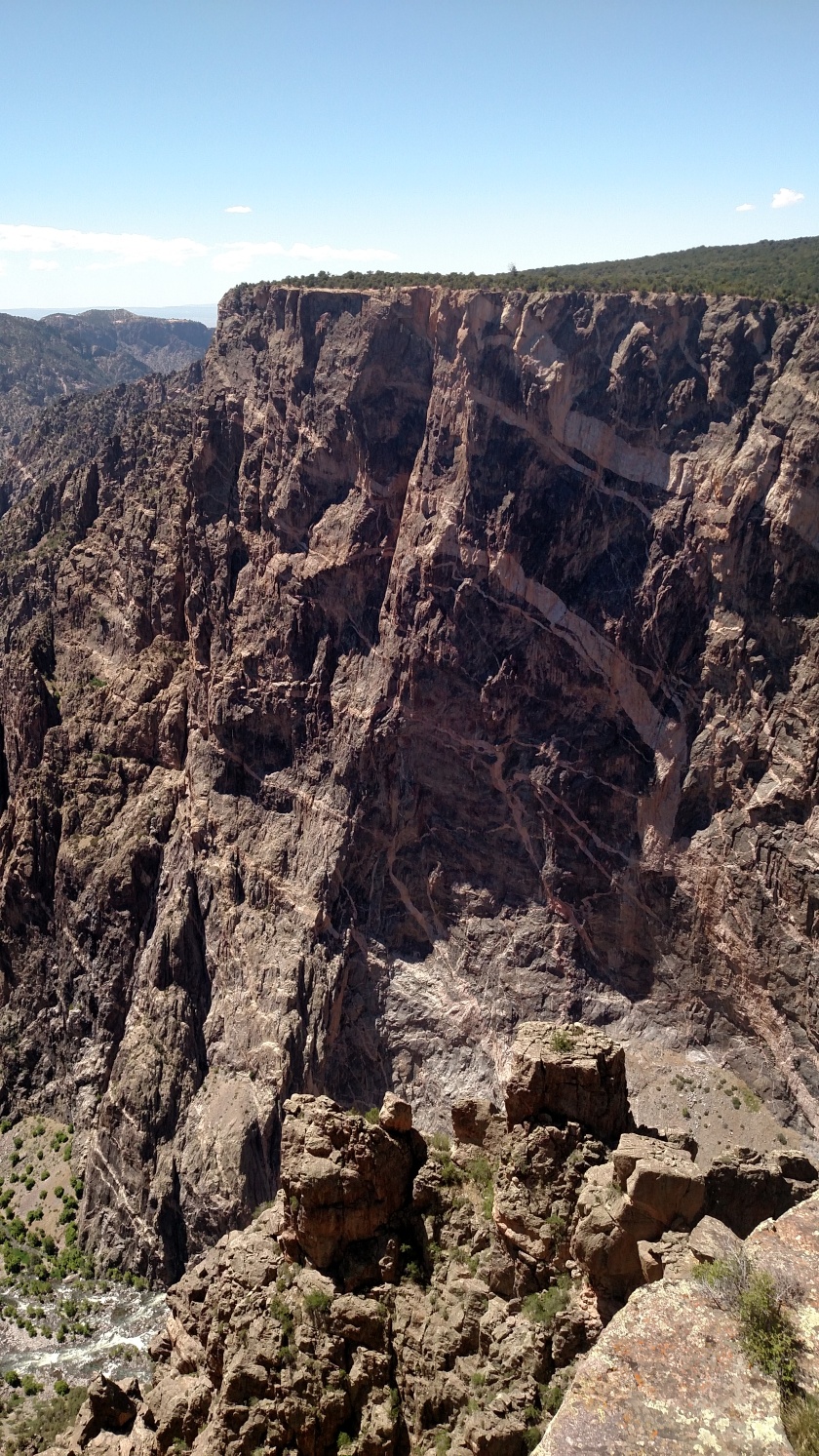 And once again, don’t you dare go over the safety fence!

I am so glad my Airbnb hostess told me about this!

Utilizing 1,000 feet of the Uncompahgre River which flows through the town’s Riverbottom Park, grant money allowed the construction of ramps (put-in and exit points) , bridges, spectator areas, etc. for the formation of the Montrose Water Sports Park, one of the few in the state and one of few in the country to satisfy ADA (Americans with Disabilities Act) standards allowing access for all.

I stopped here yesterday on the way home and found Emergency Rescue crew training underway, as well as kids and other users enjoying the facility.

This guy (red life-vest in the middle of the river) was valiantly trying to stand up on his surfboard while surfing in place (facing IN to the wave, as opposed to riding the wave – which I didn’t even know one could do…).

When I took the photo above I was standing next to a guy in a red watersuit who said he was the “upstream spotter”.  Behind us was a large class of rescue workers and trainees (and perhaps regular people who wanted to learn the basics of water rescue) and the spotter had a whistle and would alert them if someone (kayakers, rafters, paddleboarders, etc) were coming downstream so they could clear a path. 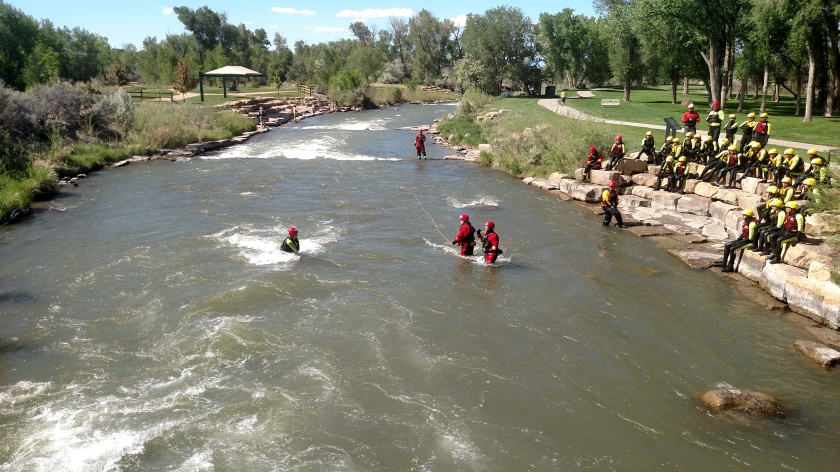 When “class” adjourned the members walked upstream and practiced “riding the river” downstream.  Tip – apparently you should roll on your back and float feet-first downstream, and roll on your stomach and swim to the bank if you want to stop. 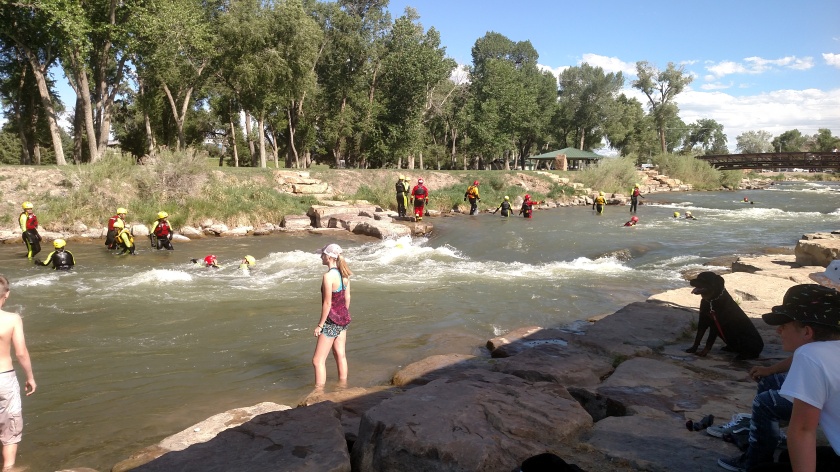 Needless to say, this is probably a VERY popular spot on a hot summer day.  The park itself is huge and has many other components (ball fields, skateboard park, open space and picnic areas).  A great investment!