When I was on “The 101” the other day my GPS unit reminded me that it is also referred to as “El Camino Real” (pronounce the last word as two syllables: re-AL).  That term is Spanish for “The Royal Road” and it is sometimes called “The King’s Highway”.  I had driven on a portion of this road when I visited San Diego a few years ago.

This is the symbol which you see many, many places along the road.  A bell, hanging from a lamppost.

Although this road is found in other places, in California it represents a 600-mile stretch of road which connects 21 Missions, several Presidios, and other places of historic significance.

Friday I headed north from where I had been staying in Nipomo as I would be spending one night on the Monterey Peninsula before heading inland to some of California’s National Parks on Saturday.  I drove north on “The 101” and stopped briefly in the little town of San Miguel.  Just off the highway I found my target.

This mission was established in 1821: 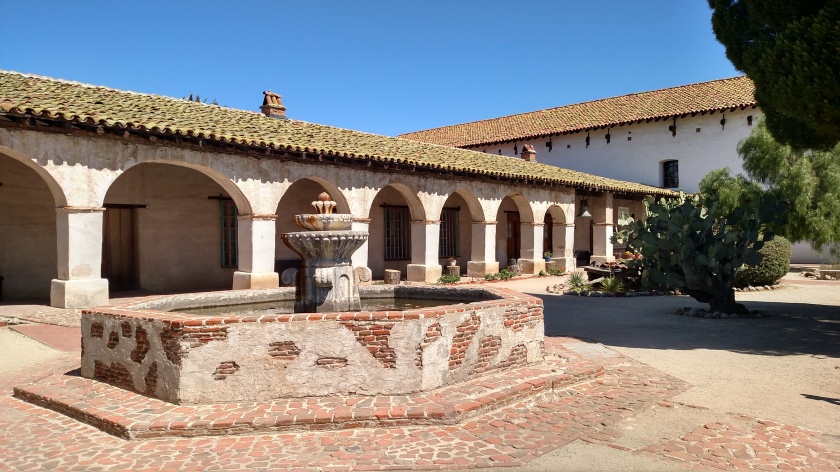 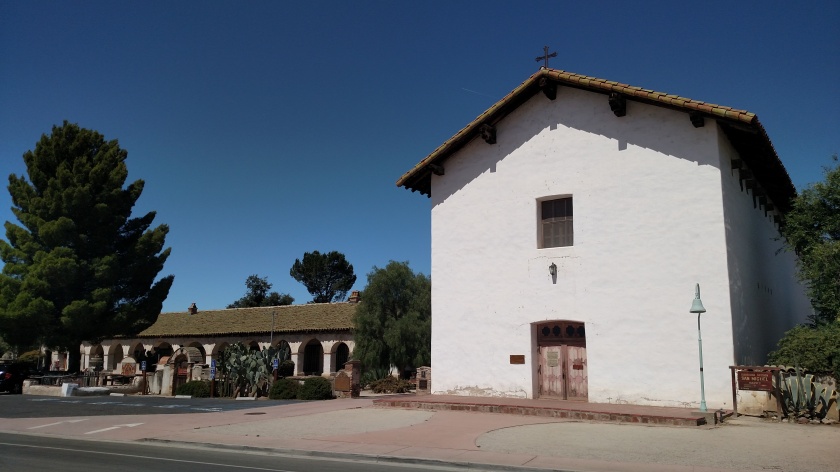 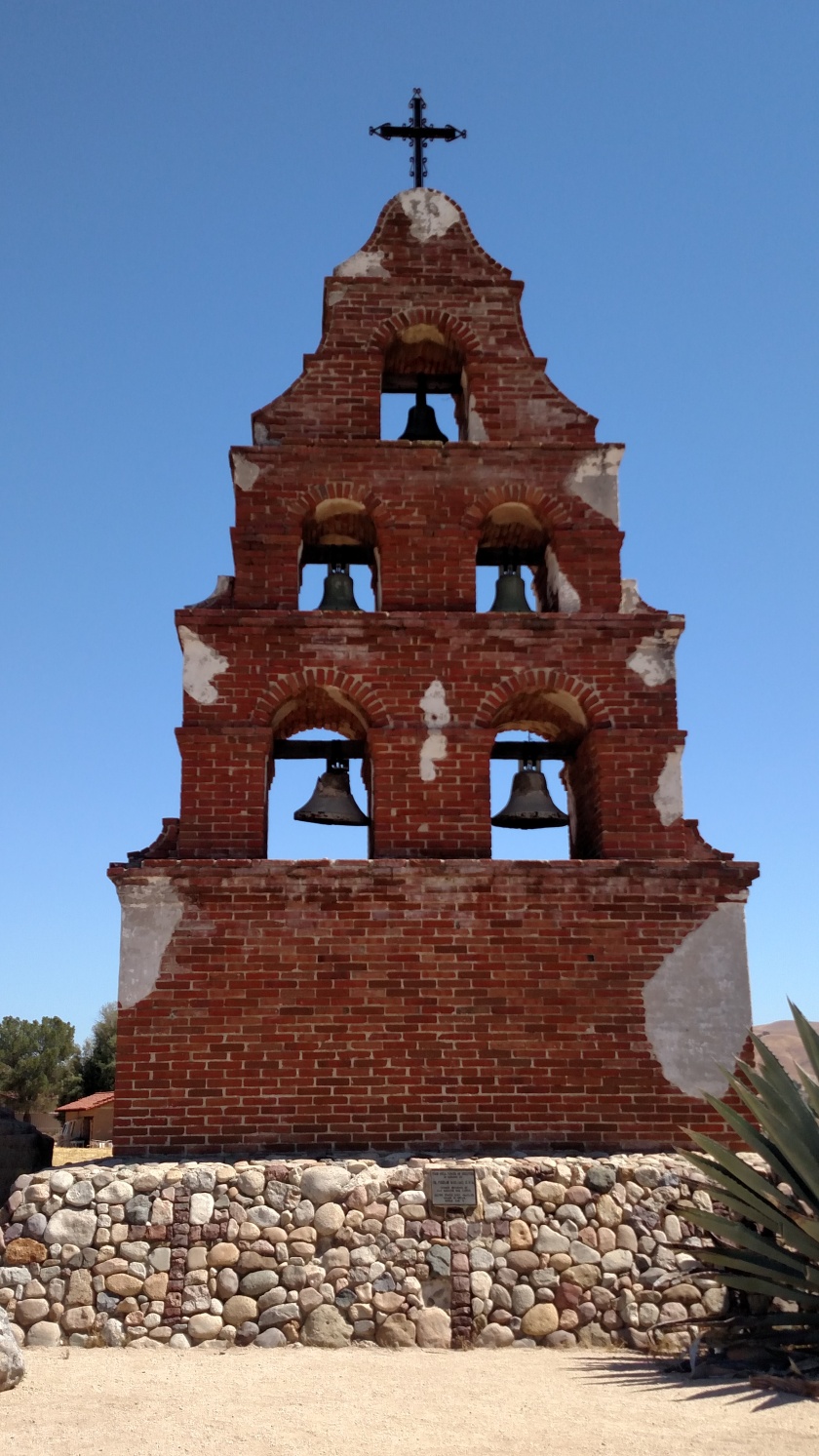 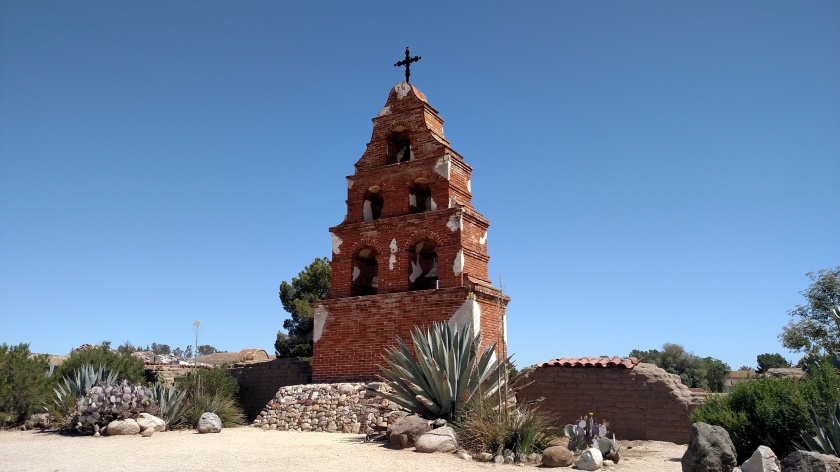 As I had been driving north on the highway I noticed a line of mountains off to my right.  These mountains looked very similar to some I had seen in southwest Idaho last year.  They are covered in tall, dry grass and, from a distance, look like they are soft and blanketed in velvet or velour. 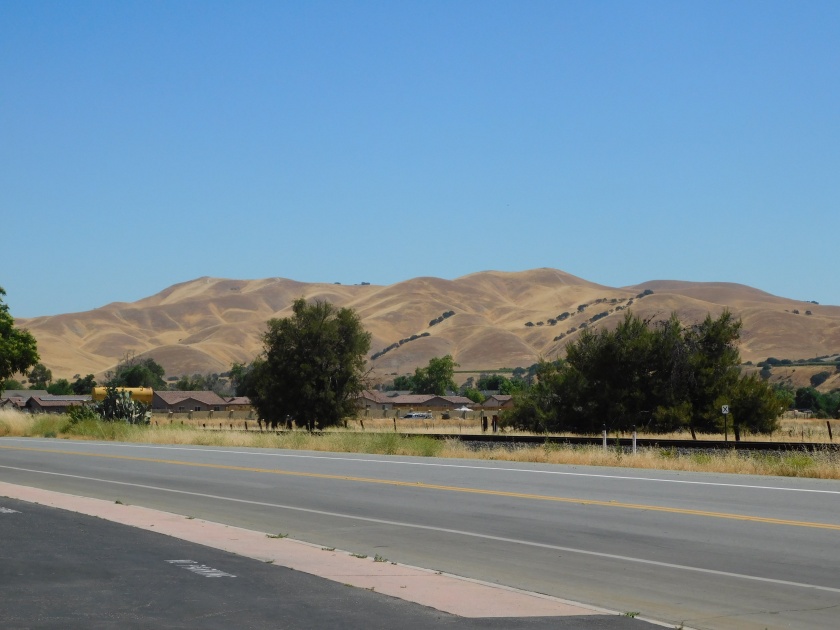 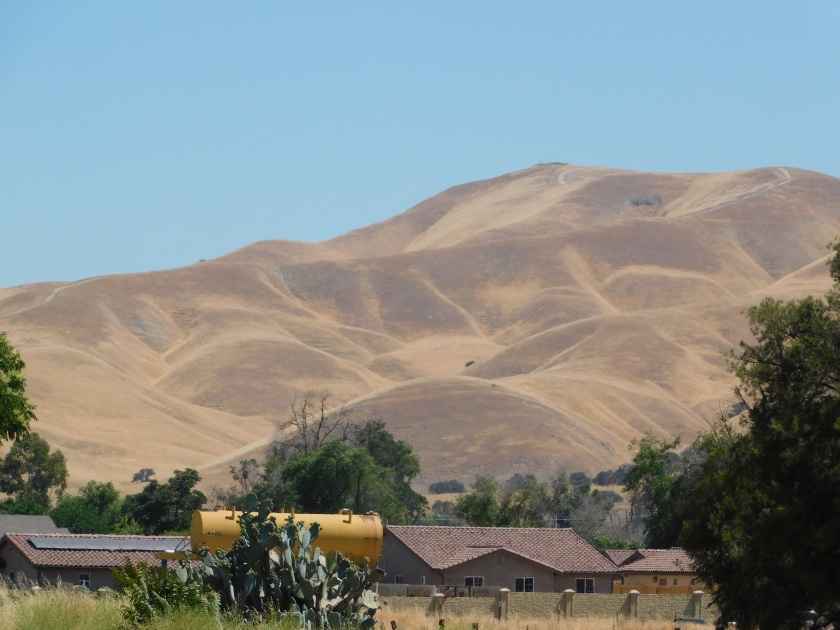 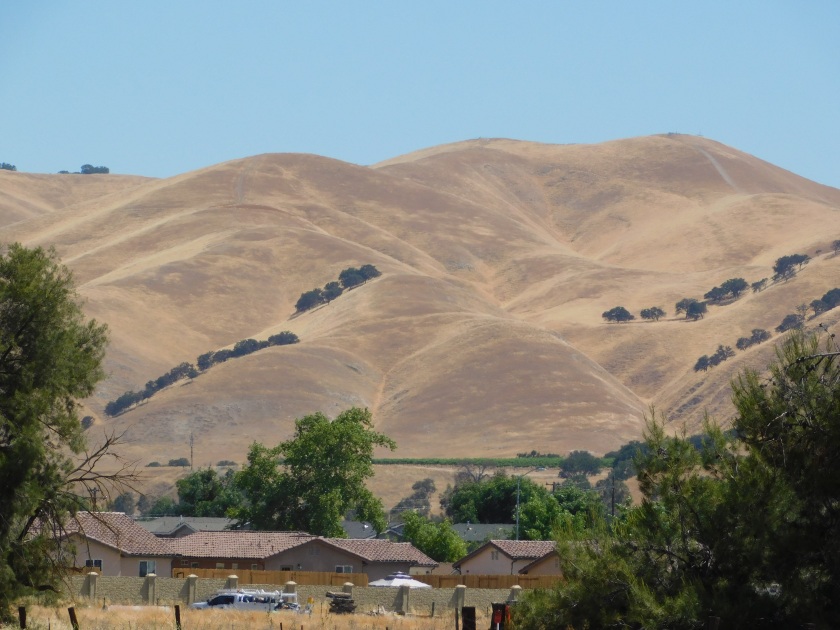 After visiting the Mission in San Miguel I drove a little further north to the town of Bradley.  The California Department of Transportation website recommends that travelers take “The 101” all the way up to Monterey, then backtrack south on Route 1 (the PCH) to view the scenery north of where that road is closed.  I saw a nice shortcut using smaller roads, which I prefer anyway, that would take be out on the PCH much closer to the closure.

I exited “The 101” and proceeded northwest on State Route G18.  This would take me to the little town of Jolon, near the Fort Hunter-Liggett military base.  I didn’t want to see the base, but instead stopped at this Mission, which was established in 1771: 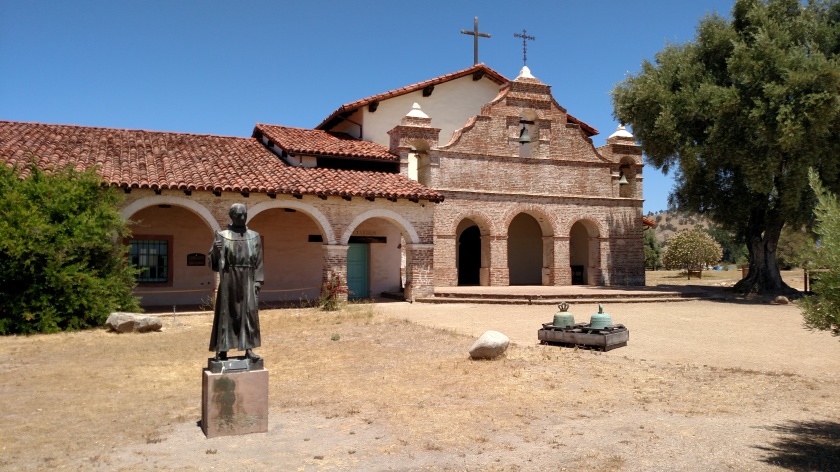 After visiting the Mission in Jolon, CA I continued northwest on what would become Nacimiento-Fergusson Road.  This 24-mile stretch which would take me out to the coast starts out fairly level and is a beautiful, scenic road.  Eventually it becomes heavily wooded as it starts to climb the eastern side of the Santa Lucia Mountains and at this point becomes a narrow, winding mountain road with an increasingly steep grade.  Did I mention it was narrow?

There weren’t any places to pull over and stop until I had almost reached the top, and there were no houses or cell phone service, so good luck if you break down.  I quickly learned why this was not the posted detour to get back out to the Pacific Coast Highway.  Did I mention it was narrow?  There were places where I had to come to a complete stop when I met a vehicle coming the other way before we could squeeze past each other.  God forbid someone tries to drive this road in an RV or hauling a big trailer.  Did I mention it was narrow?

I finally reached the peak, at 2,780 feet elevation, and began my 7-mile descent to the coast.  It had been sunny on the east side of the mountains but the marine layer was still lurking on the west side:

The pictures don’t do it justice.  It became very thick and I did stop at few turnouts (there were more of them on this side) but it is hard to take pictures of fog.

This was looking down off the side of the embankment:

Oh, and this was when my GPS unit tried to kill me.  This side of the mountain had sharp curves (over 100, I read. Believe me, I didn’t take the time to count them), steep dropoffs and, most importantly, NO guardrails.  Bicyclists call this the “Death Road”.  At one point my GPS said “left turn ahead” and when I quickly looked down at it she wanted me to make a 90-degree turn left in 50 feet.  Which would have plunged me into the abyss.  I had already thought to myself “This would be a great place to drive off the road if you didn’t want anyone to ever find your car or your body”.  Don’t worry, my meds aren’t giving me suicidal thoughts as many apparently do according to the TV ads.

This was looking back up after I got below the cloud deck.

And this was when I could finally see the ocean below me: 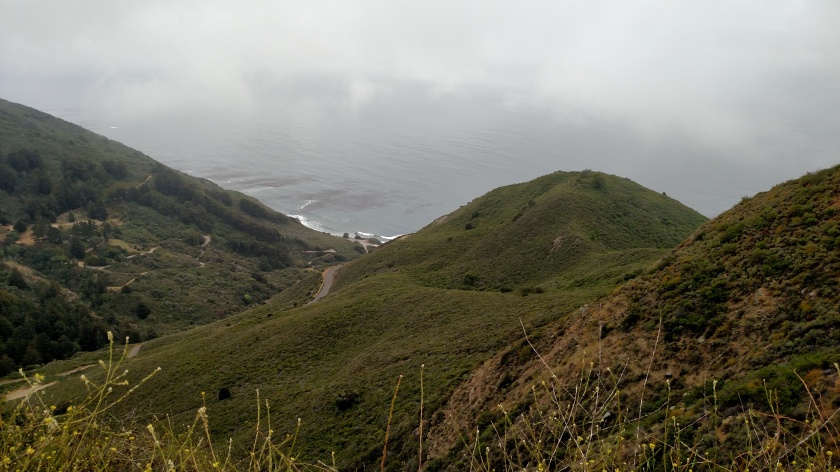 Once I reached the PCH I could drive 8 miles south before reaching the point where it is closed for road reconstruction. 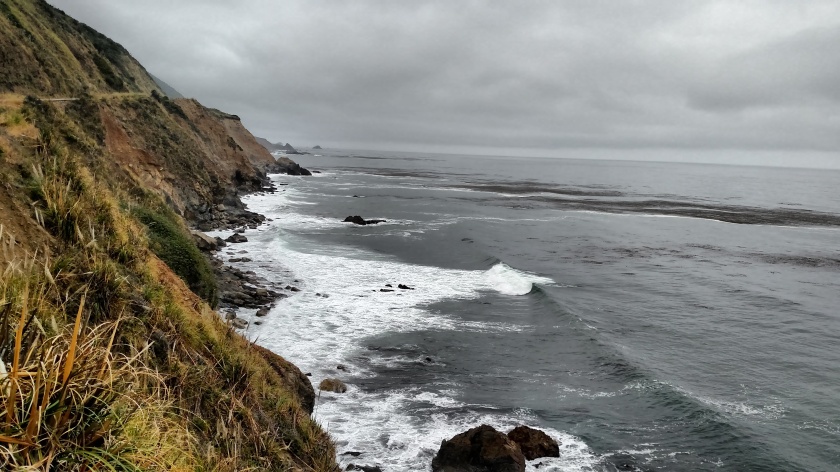 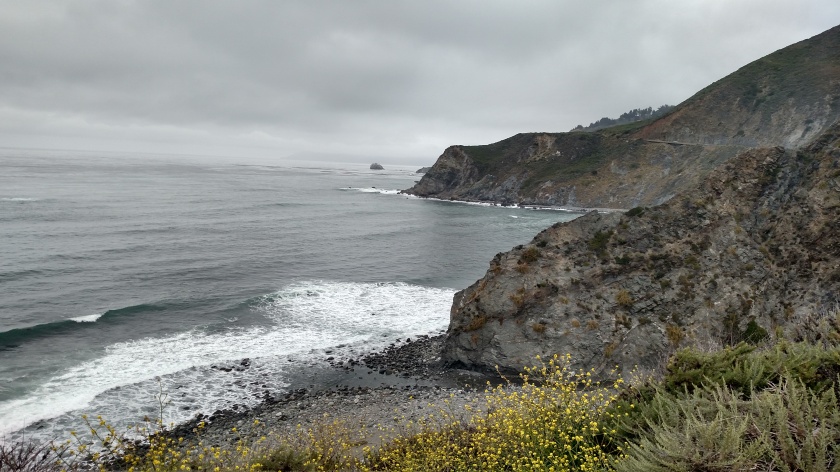 I finally reached the “end of the road”. 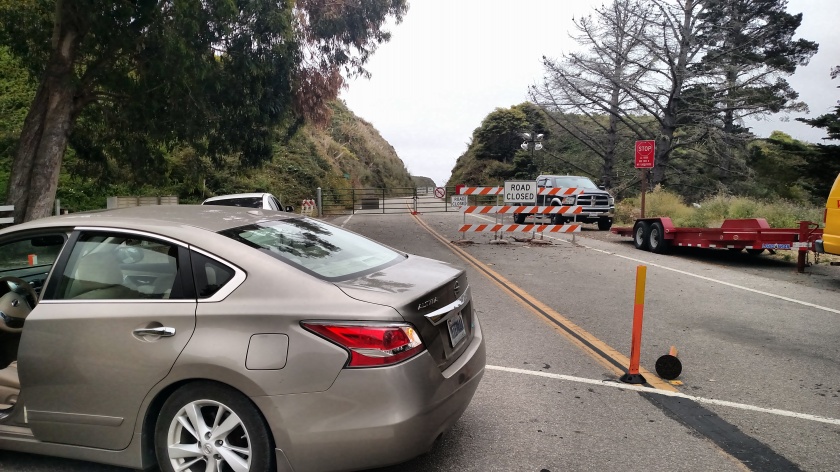 And if you thought the price of gas in Death Valley was outrageous, wait ’til you see this.  This is what the gas station in Gorda, about 200 feet from where I took the photo above, was charging: 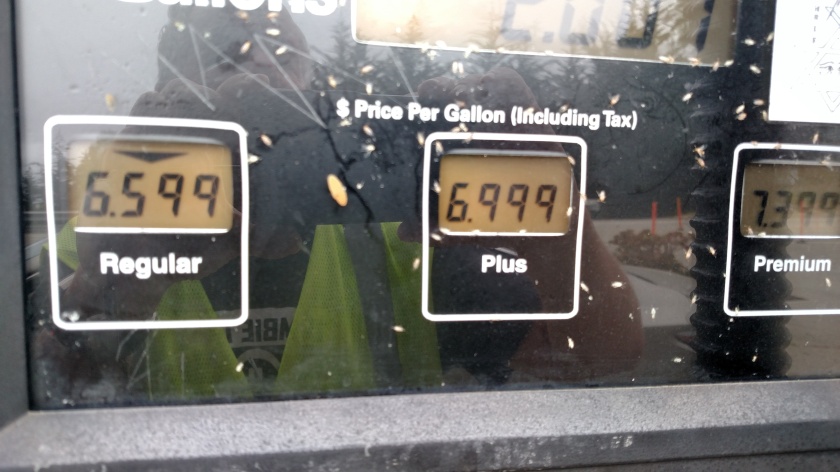 I went on the California Consumer Affairs website to see if I could report this as price gouging but apparently those rules only come into play for 30 days after a disaster.  You can barely see it in this photo but the last customer wisely only bought 2 gallons.  But again, if you’re dumb enough to come here and need gas, you deserve to pay this price!

After reaching the point where I could not proceed further south I turned around and headed toward Monterey.  The coast remained overcast with the marine layer so the pictures don’t look all that great, but the scenery was still very impressive.

This next series of photos make me look stupid.  I know, I know – some of you are thinking, Well?….

When doing my research before embarking on this trip I had read about the Bixby Bridge, a very picturesque bridge along the PCH where a gazillion car commercials have been filmed.  As I approached this bridge I very carefully positioned myself at various points to take photos.  I just discovered to my shock and dismay that this is NOT the Bixby Bridge.  I did drive over it (the BB) later in the day (and I will admit I thought to myself – I wonder?…) but I believe this bridge was a lot more impressive, so let’s just pretend…

There you have it – full disclosure.

Now I know I have this next one right.  Further up the road I came to Julia Pfeiffer Burns State Park.  While I’m sure the Park itself is very nice, most people (including me) never even go in through the entrance.  Outside the Park entrance, across the PCH, is this: 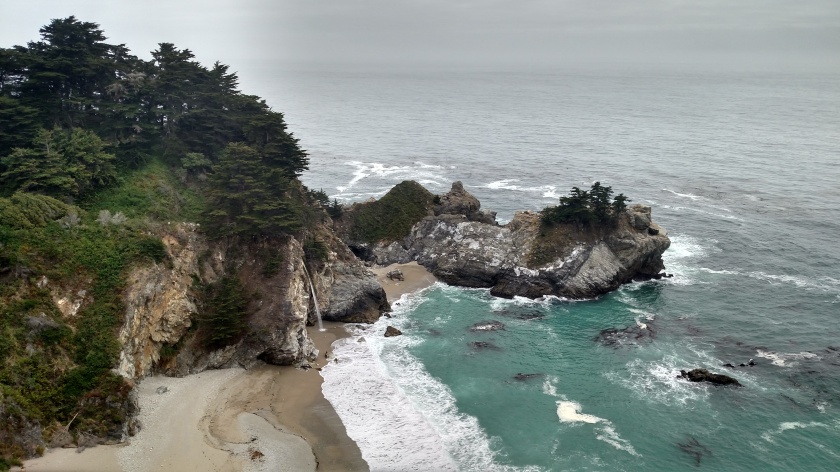 You may not notice it in the first picture, but allow me to zoom in some:

This waterfall cascades down on an uninhabited beach. 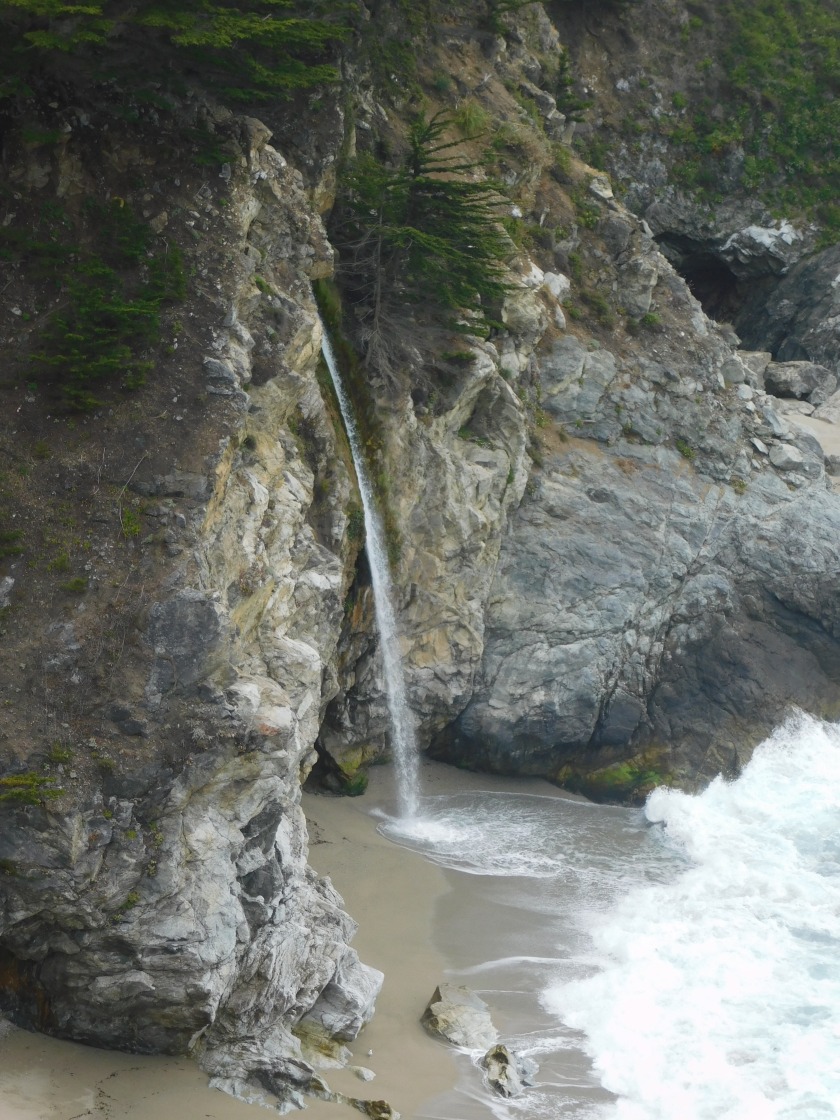 As I resumed driving north my next point of interest came in the form of a big rock sitting in the ocean.  This is the Point Sur Lightstation, which sits atop a 361 foot tall rock. 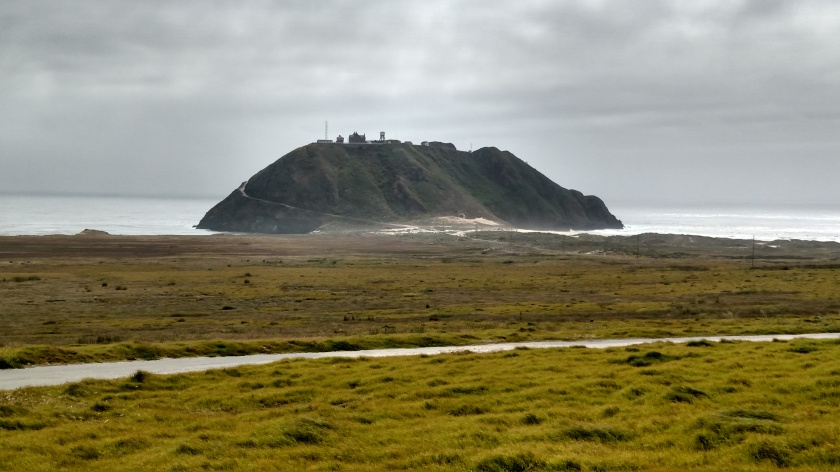 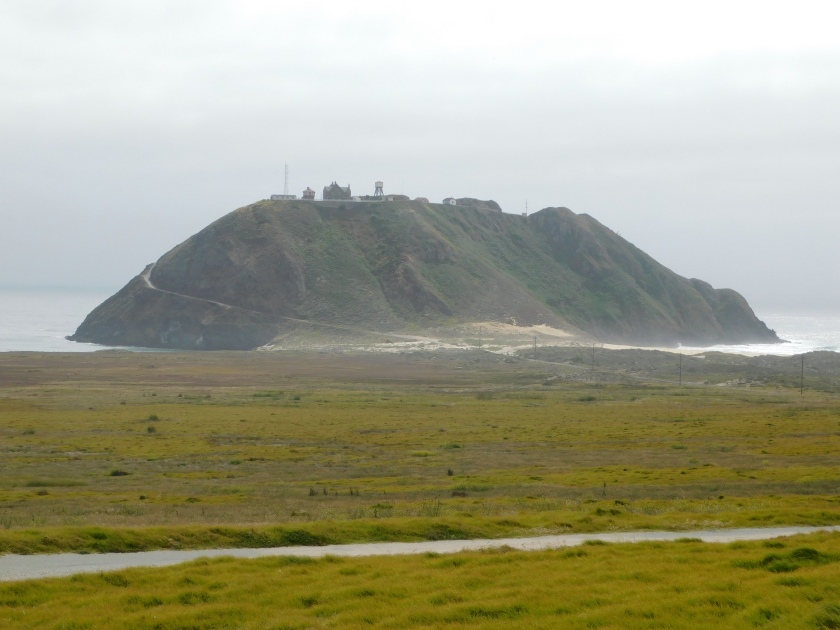 And further up the road, before I got to Carmel, I saw this:

When I reached Carmel I hit Friday night rush hour traffic, complicated by road construction.  I had intended to spend some time in Carmel before going to Monterey but decided against it.  If the marine deck had dissipated I may have even gone back before the sun went down but alas, that will be what brings me back here someday.