Many of the attractions, and the two big hotels, at Yosemite National Park are located in the dead-end Yosemite Valley.  I didn’t venture into the Valley when I arrived in the area on Saturday because of signs warning of up to 3 hour delays driving in and out (it was the 3rd Saturday of June, after all, and I had already sat in line for an hour and a half just to get in the main entry gate).  In addition to the three popular attractions I have discussed earlier (El Capitan, Half Dome and Bridal Veil Fall) another big hit with tourists are these two Falls, located deep in the Valley.  Upper Yosemite Fall is at 5,404 feet elevation and has a vertical drop of 1,430 feet – the largest in the Park.  Lower Yosemite Fall (which you can see in the lower left hand corner of several of these photos) has a vertical drop of 320 feet.  There are what are called the Middle Cascades between them which drop 675 feet for a combined 2,425 foot drop.

Here are photos taken at various times on Monday and Wednesday: 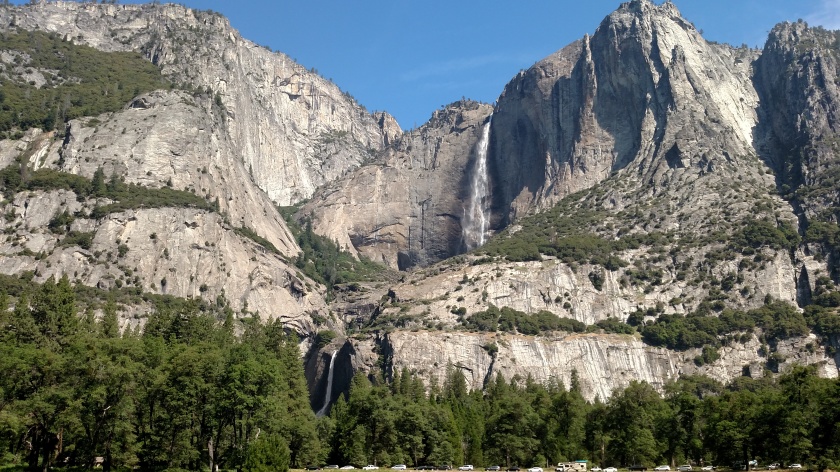 These were taken Wednesday afternoon at around 145 when the sun was fully hitting the face of the mountain (Yosemite Point, 6,936 feet elevation).