This wasn’t our engine but is the same type.

This was the car I would ride in: 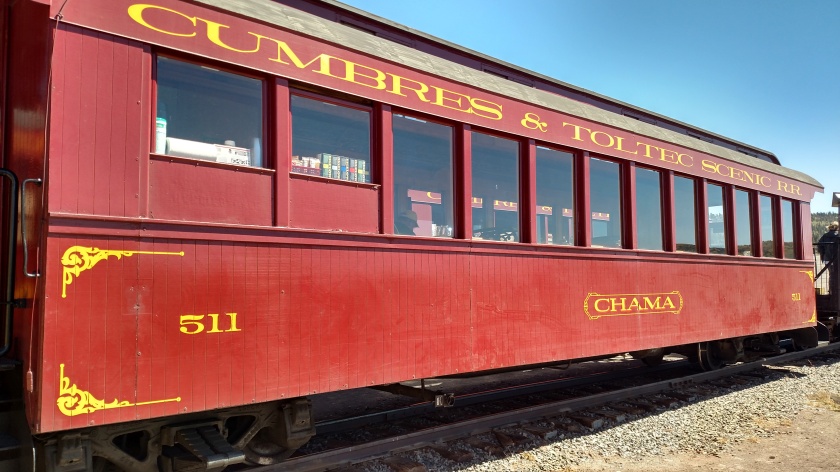 And these were some of my travel-mates: 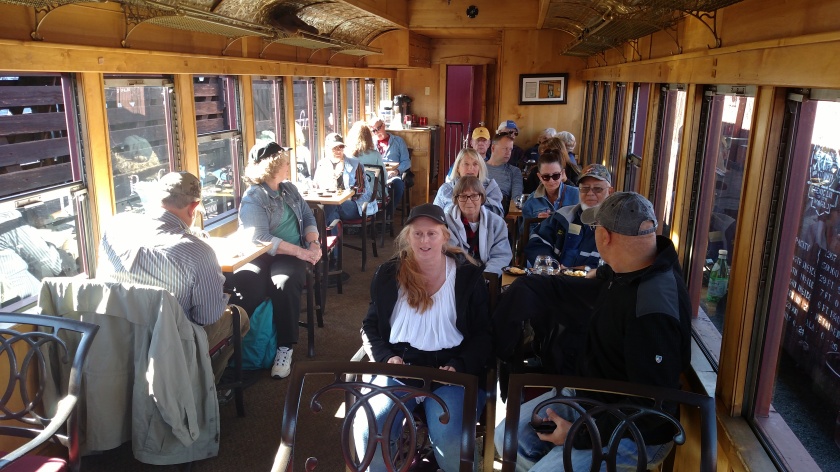 I sat at a small (only one place setting wide) table on the right side of the car as seen here, although it was at the front of the car and on the left side given our direction of travel.  The left side as seen here also had tables but only sat one person in each direction.  They were all booked by the time I made my reservation a few days ago.

Ours was the next-to-last car on the train.  In front of our car was an open “parlor” car which anyone could walk to once we were underway for unobstructed photo ops, although you were then out in the strong wind, generated by nature, not train speed, and were, at times, in the smoke and cinders generated by the engine.  I did not go out there at all, opting to takes pictures from the windows (which we could open) in our car.

Looking at the open car through the door in the front of my car: 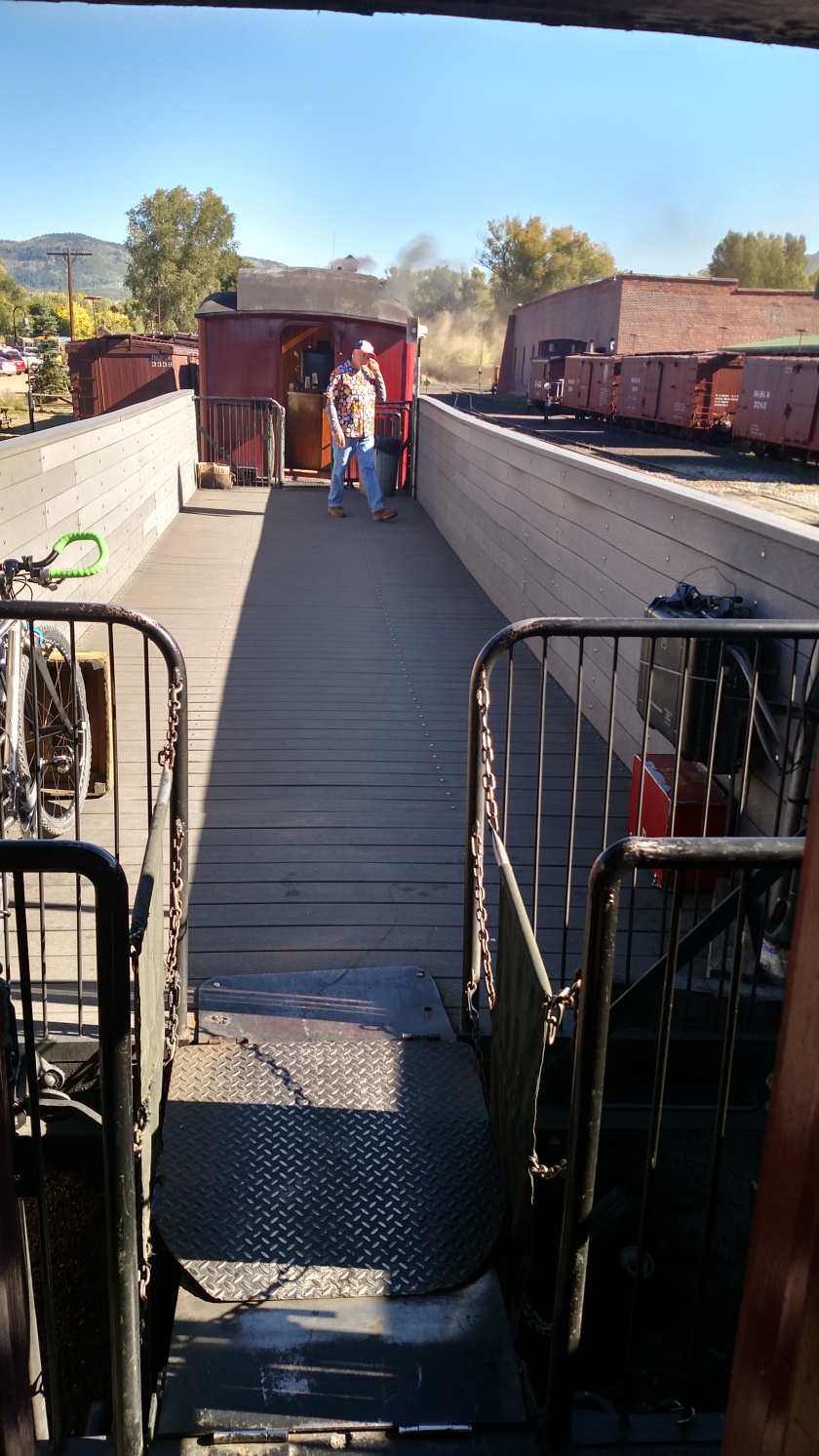 Once we were underway the open car became populated pretty quickly.  I shared a table with the three women in the left/foreground of this photo.  The one in the maroon hat lives in Taos, her mother has on the purple hat and her aunt isn’t wearing a hat.  Behind her is the train photographer who busily took photos suitable for framing (and for a fee, if you chose to buy it – no pressure, no obligation). 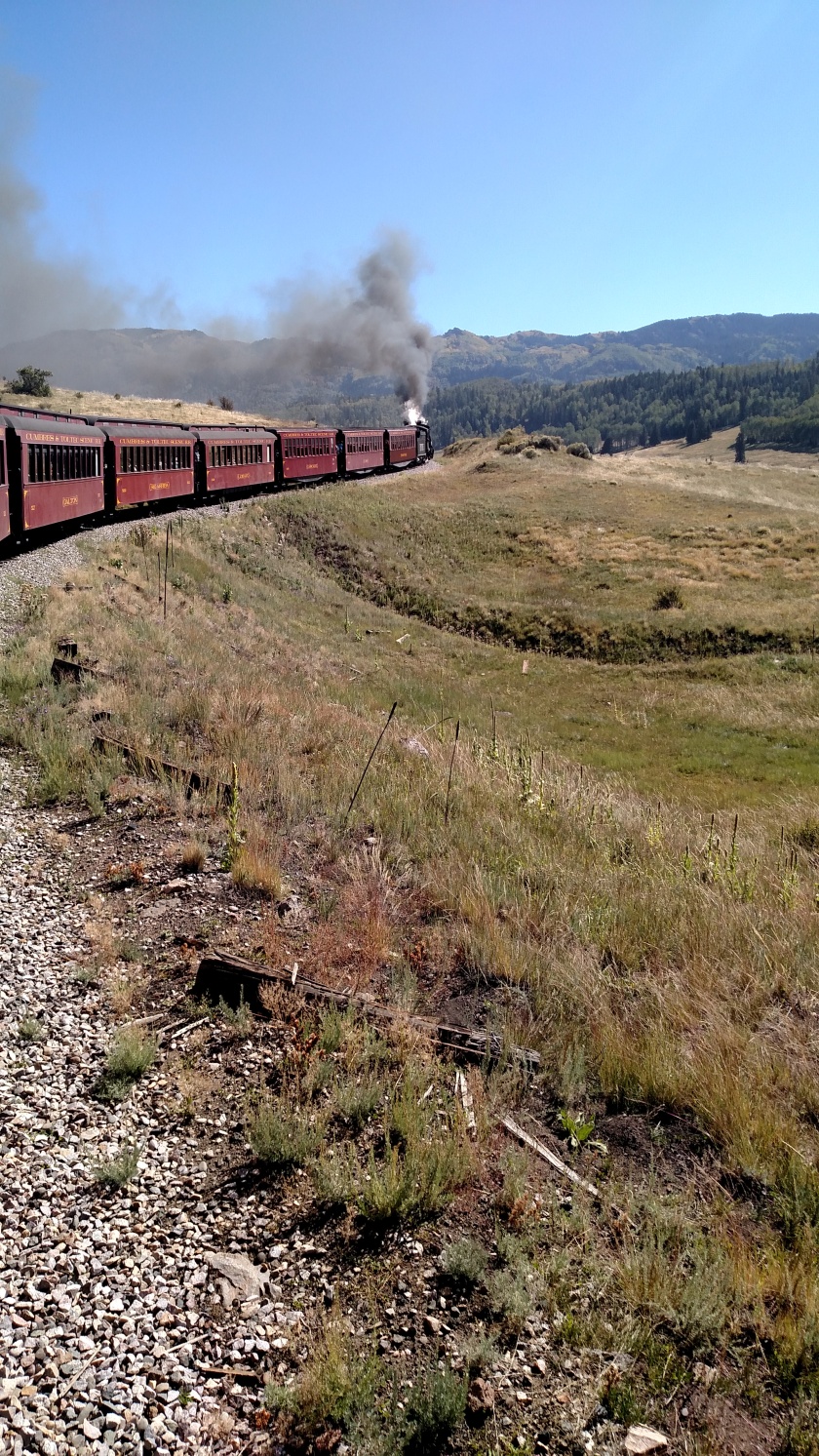 The weather was fantastic and the scenery was spectacular.

And it turns out I had a birthday-girl at my table!  It was the woman in the purple vest’s birthday (I’m not very good with names, I think they said it was Johnnie as we were singing to her).  It was also the woman (wearing sunglasses) sitting a few rows behind her’s birthday. 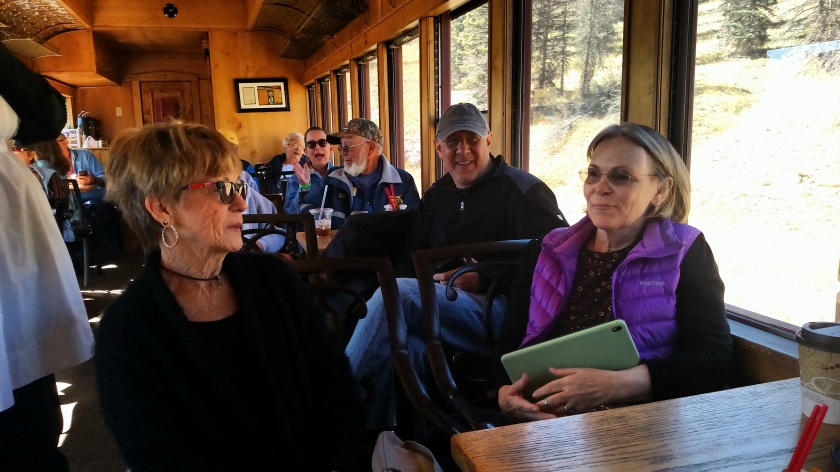 Veronica (on the left in the photo below – as we sang to Johnnie), our car attendant for the first half of the ride, served complimentary beverages and snacks and explained where we were and what we were seeing at various points during our trip.  Veronica also makes an awesome Bloody Mary, not complimentary but well worth the price!!

We stopped for lunch (included in the $166 fare, as was a complimentary glass mug) in Osier, about halfway through the ride.  I picked turkey with all the trimmings, plus a choice of several desserts (I had 2), and it was excellent.

I took so many pictures with my smartphone during the first half of the trip that I didn’t have enough room on it for the second half.  I tried taking some with the digital camera but quickly learned that there was too much movement to allow good pictures while zoomed in even a small amount, so I just put it away and enjoyed the ride.  It was a shame because the scenery on the second half of the ride was even more breathtaking that it was on the first half.

I boarded the bus in Antonito at 830am, the train left Chama at 1000, we stopped for over an hour in Osier for lunch, and arrived back in Antonito around 5pm.  It was a great day!

I will be taking a similar train ride from Durango to Silverton, Colorado in less than a week.  I assure you, I will clear plenty of room for pictures on my phone before taking that ride.

There is a photo gallery on the Cumbres & Toltec website if you want to see more photos.  It includes many external shots of the train as it travels the countryside.