As I drove around to the various parking areas at Paint Mines Park I saw a black Jeep with a clever spare tire cover I wanted to take a picture of.

When I got out of my car to take the picture I noticed there were two dogs in the open-air Jeep, patiently waiting for their owners to return (dogs are not allowed on the paths leading to the clay formations).

This one looked really dejected that they didn’t take him along.

And the other knew where they went and was keeping watch for their return.

I heard a sound which I hadn’t noticed earlier and knew I was too far away from the wind turbines in the distance for it to be coming from them.  That was when I noticed the white drone (a small multi-rotor helicopter) up in the sky. 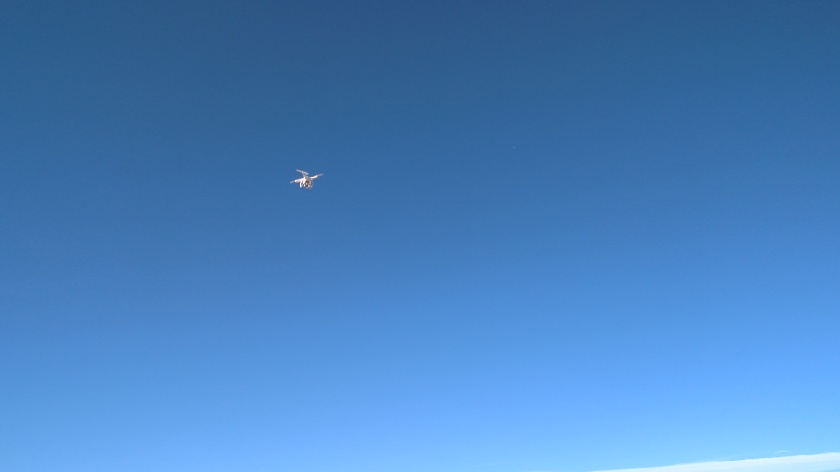 Turns out it was being flown by the owner of the Jeep and he had been using the drone to take video as it flew over the clay formations.  (I later warned him that, although this wasn’t one, doing such things in National Parks is now specifically banned and that he probably shouldn’t have been doing it here either since there were people scattered around the formations and you aren’t supposed to fly over people. #JohnBoyTheSpoilsport).

His wife (or girlfiend) told me he has only been flying for about a month, and he was actually quite good at it, although drones are much more stable than the r/c helicopters I have flown and are considerably easier to control.  And they do take some awesome video.

He is controlling the drone with a radio and watching the video it is taking on his cellphone which is attached to the radio itself, which is how he knows what commands to give.  When I fly I have to watch the helicopter itself at all times.  If I put a camera on mine I’d get sick really fast because sport flying is very different from drone flying.

She said they like to use the drone to entertain the dogs.

I gave them the name of the blog and asked them to let me know when they post the videos he took on YouTube.  When I find out I’ll pass it along to all y’all.

When I get done traveling (which may not be until 2021 based on current projections) I do want to get back to flying my helicopters.  I may even treat myself to getting a drone for Christmas, although I don’t really have time right now to get back to flying.  I’m very busy!