Monday I drove in to Sequoia National Park, which is only about 45 minutes east of where I am staying in Visalia, CA.  Although I usually try to get out and about early in the day, I didn’t leave the house until 9 because I wanted to stop downtown at the Visitor Center which wasn’t open on Sunday.  After getting maps, brochures and recommendations I set off for Sequoia.

I drove past this big lake on the way to the Park. 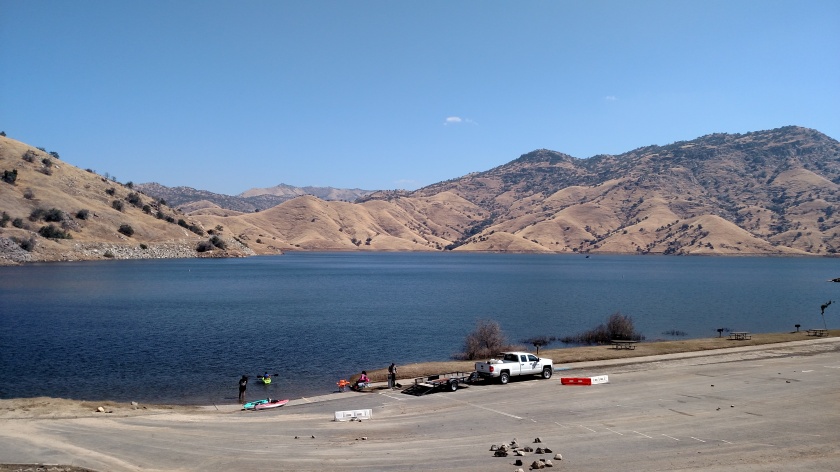 I would drive past the lake again in the afternoon on my way out of the Park, when I would see what I am quite sure was a bald eagle (white head, white tail, long black wings) flying above it.  I went back to find a legal place to stop and by the time I got in position it had risen way up above the lake, too far away to even zoom in for a picture.

Before getting to the Park I drove through the little town of Three Rivers.  I stopped there to get a sandwich to take into the Park so I could enjoy a picnic lunch.  When I got to the Park entrance there were signs warning of road construction, with hour-long delays at times.  When I stopped at the Visitor Center I saw a sign that said if I left there at quarter after the hour I would make it through the construction zone before the hourly closure.  I looked at my watch and it was 1116.  I hopped back in the car and resumed driving (obeying all speed limits in the Park, of course).

Well, I got up to the zone at 1146.  And sat in line.  I thought I had missed my window of opportunity.  I ate my picnic lunch sitting in my car.  I did get out and take these pictures while I was waiting. 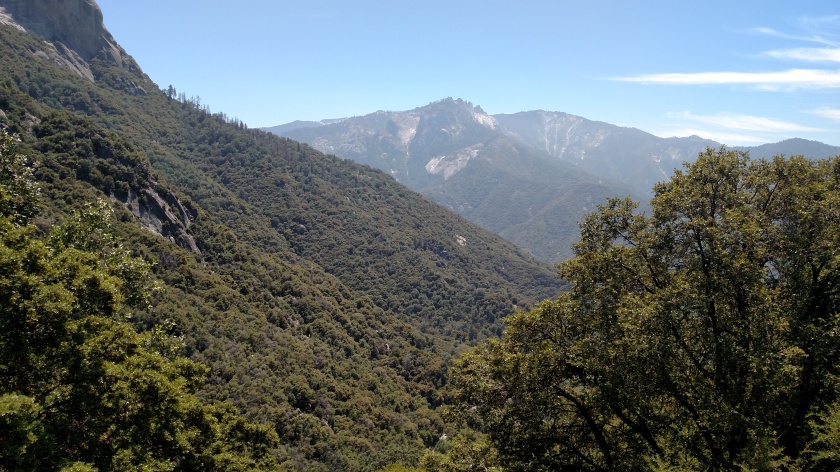 I turned around and started driving down the mountain.  I studied the map while I had sat waiting and discovered that I really didn’t intend to be where I was anyway!  I had planned to turn right after entering the Park on a road which dead-ended east of the Park, then go back and drive a scenic loop to the southeast of Visalia.  I was now on the road which goes northeast, deep into the Park, which I wasn’t planning to do to until Tuesday.

I stopped on the way down and took these: 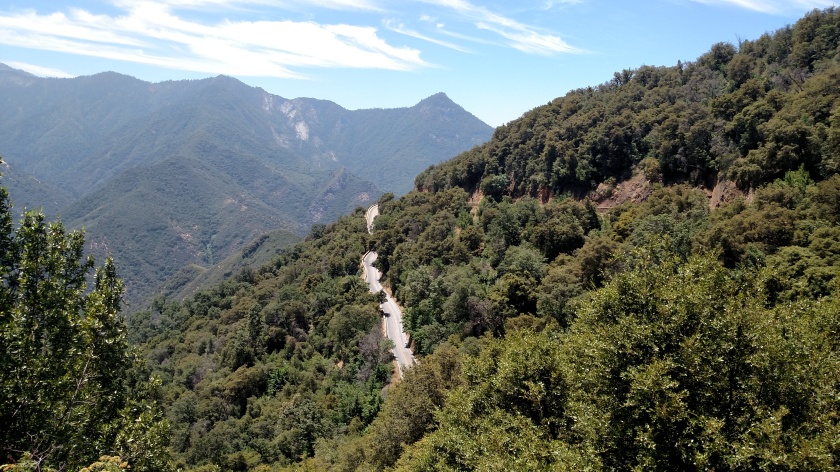 I stopped at the Visitor Center and told them they needed to fix their signs.  Turns out it was my error – I has misunderstood a large sign that told about the road opening at 1130.  I thought that was the target I was trying to beat.  It seems that the road opens on the hour, not the half hour.  The sign I saw was for 1130 PM, when they close the road for several hours at night and only open it once at that time.  I suggested they clarify the fact that during the DAY the road opens at the top of the hour.

I also learned that the road I had been planning to take all along is outside the Park, about 2 miles before the entrance.  I exited the Park and went and drove part of it.  It was paved but not in very good shape, and was narrow.  I only went about half way back the full distance and decided to turn around and leave, as I wasn’t seeing anything really impressive anyway.  It’s a good thing I did, as the next road I planned to take took much longer than I thought it would and I had already wasted enough time…

Before leaving I did get these pictures: 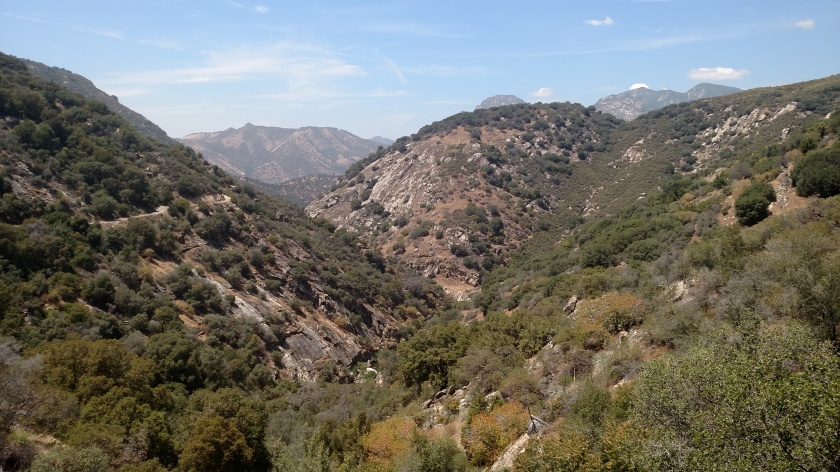 As I was driving through Three Rivers I stopped to get this picture of a Paul Bunyan statue.  The sun was behind it when I passed it earlier. 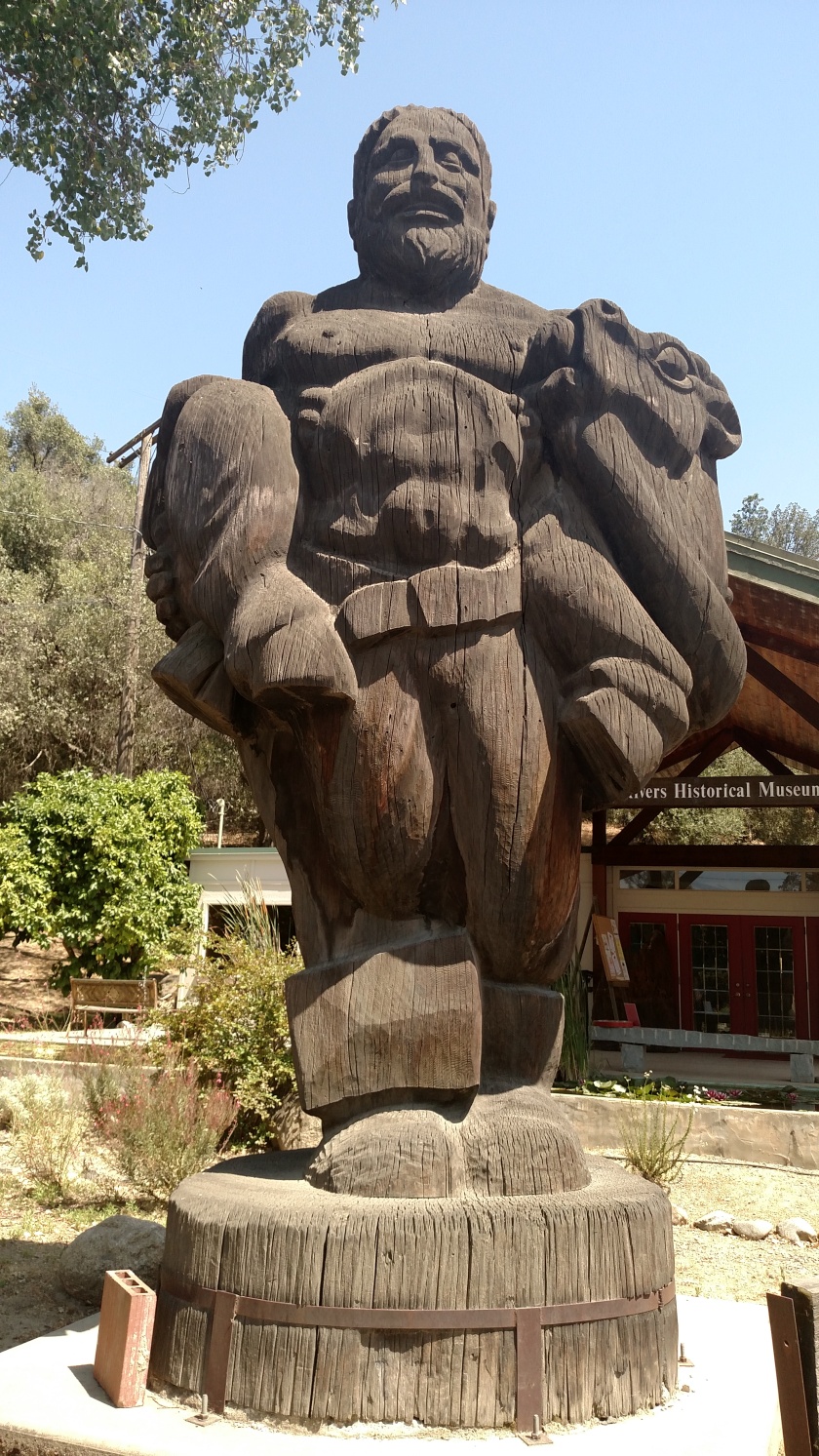 One thought on “Sequoia National Park”