After exiting Sequoia National Park for the day on Monday (I will be back there for a full day on Tuesday) I drove south on a series of roads to get to the Giant Sequoia National Monument – South Unit, which is located south of the Park (and there is a North Unit north of Kings Canyon National Park).  Evidently these areas didn’t qualify for inclusion in the Park itself.  My plan was to make a big clockwise loop on a series of scenic roads before heading back to Visalia.

I suppose I should have stopped to take more pictures in the National Monument area but it evidently experienced a large fire years ago and many of the steep slopes towering over the road on which I was driving had been stripped of trees and vegetation and all that remained was dirt and large rocks – not a good combination on their own.  I could just imagine me standing there wearing my Safety Sam vest and holding my digital camera saying “Oh, look” while a 50 ton boulder came rolling down and squashed me like a bug.

I did get this photo looking back at the direction I had come, where the sun would soon be setting. 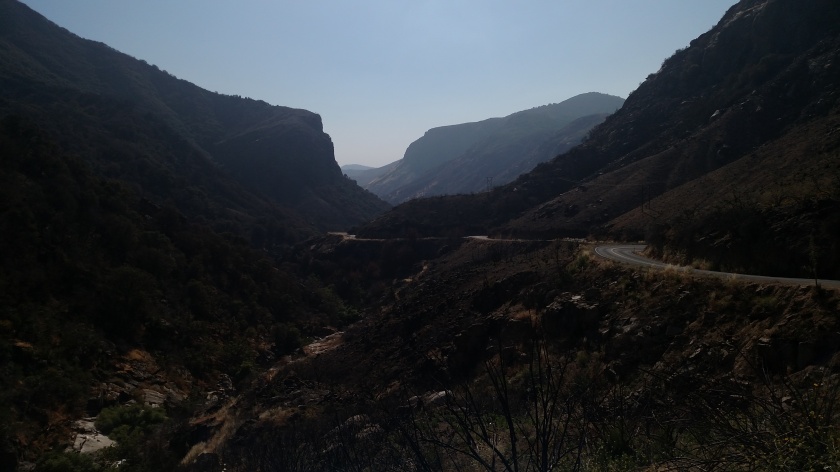 Actually, another reason I didn’t take many pictures is that I was afraid I was putting myself “on the clock,” a phrase I adopted last year when I would take so many pictures and talk to so many people throughout the day that it would be dark by the time I got back to where I was staying.  The loop I was making didn’t look all that long on the map but now that I was driving on it I realized it was a series of slow, winding mountain roads.  At least the roads were two lane, with a double yellow line down the middle – unlike the mountain road I drove on out by the coast which could barely accommodate two average sized vehicles opposing each other.

I drove up to around 6,000 feet elevation, twice,  and the temperature cooled from what it had been in the Park, so it was a very pleasant, if slow, drive.  After driving through the burned out areas the trees were plentiful and it was not unlike driving in the North Carolina or Virginia mountains.  Later in the drive there were some nice views of a big valley and big mountains off in the distance. 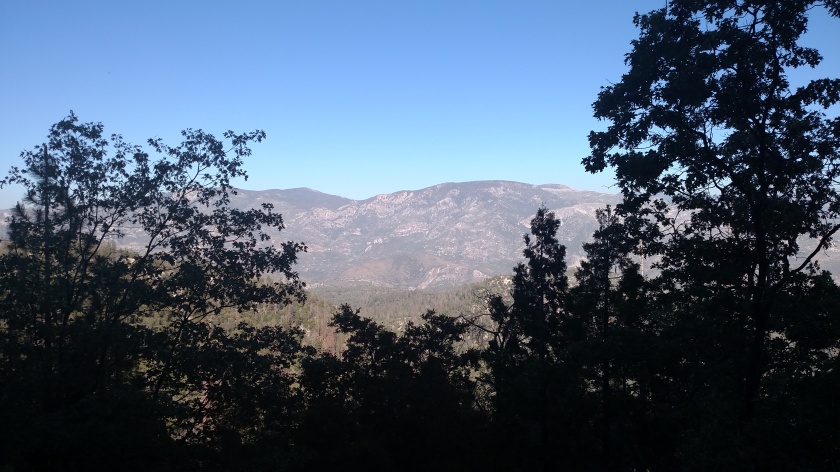 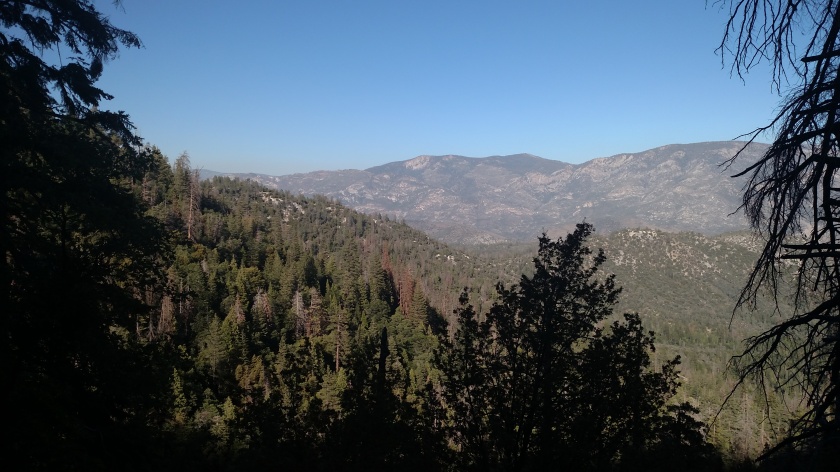 And today was my first experience this trip encountering cows in the road.  Many places in the West warn drivers of free-range cattle in the road.  As I was driving down one of the mountains there were some cows meandering in the road and I flashed my lights at a Sheriff’s truck coming the other way (uphill, into the setting sun) to warn him of the road hazard.

I did make it back home before dark, and will have a full day in Sequoia National Park on Tuesday.