This was a pleasant surprise when I arrived in northern Portland on Thursday morning.  When I was at the Staples store where I had reserved my new laptop computer I saw this facility sitting just to the west of Interstate 5.  I later saw a guy who was working at the track as a volunteer official for a series of SCCA races being held there this weekend!

SCCA is the Sports Car Club of America (whose former president was a guy named Jeff Dahnert – maybe not a direct relative but certainly an indirect one, as there aren’t that many of us in the United States).  Many years ago I worked for a friend of mine when I lived in Pennsylvania and we went to all the SCCA races in the Northeast Region (he raced an open cockpit Porsche speedster), and later to the “Runoffs” which are races for the leaders of their respective regions around the country to compete against each other.  I spent over a year doing that (no direct pay but I had many meals at his house and he paid my room and board when we were on the road at distant races) and we went to events exactly like the one currently being held here in Portland this weekend.  I will post more about that some other day.

Friday I went to the track and after signing a waiver, roamed around the paddock area looking at the various race cars and the work being done on them.   PIR is a relatively small (in the grand scheme of things) road course. 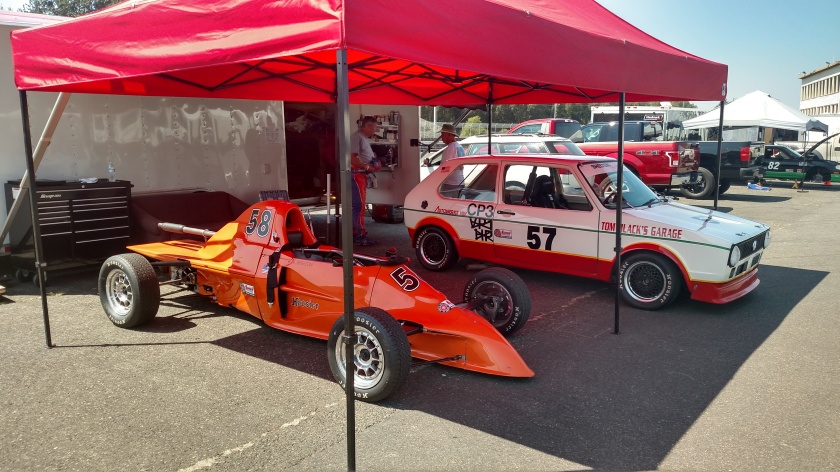 As you will see, all kinds of cars will be competing, some were specifically designed for competition and some are street-legal and can be actually driven to (and hopefully from) the track.  Accidents do happen and there are safety personnel and ambulances scattered at strategic locations around the course.

Here is the Pace Car, positioned at pit-exit on the main straightaway.  It is always ready to go on the track, if necessary, to slow the cars in the unlikely event of a major accident, and is generally used just to control the field at the start of each race.  SCCA races are usually only 20-30 minutes long and there are multiple “classes” of cars on the track at the same time. 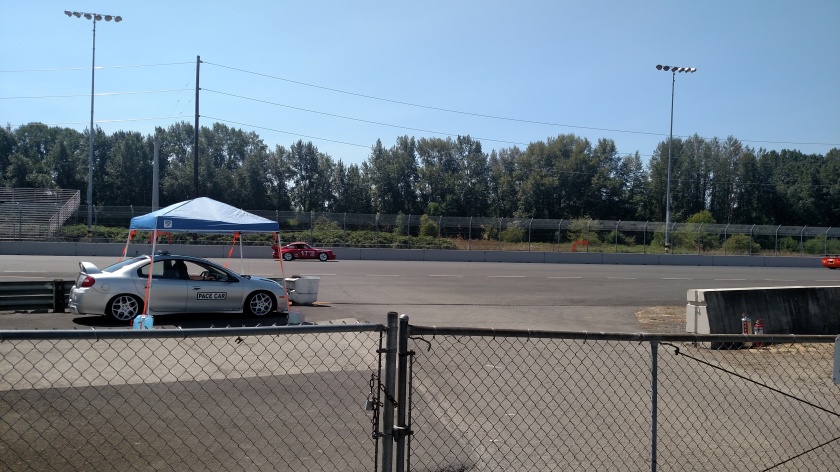 The letters and small numbers on the cars indicate which class they are competing in at this event (for example SRF3 on the red and white car two photos above).  There are usually 7 or 8 actual races (1 for each group) as well as practice sessions for each race group scattered throughout the day, and there are usually races and practice sessions on both Saturday and Sunday.   Friday is usually just to get track time and for the drivers to get oriented on each track’s setup.  Every track they go to is slightly different. 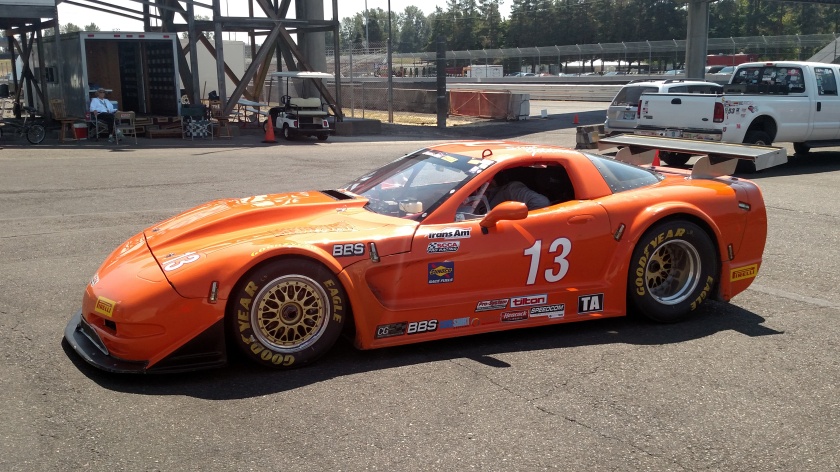 Some people race multiple cars (one at a time, of course!).  This driver has both a modern Nissan, on the left, and a rather old Datsun (which Nissan’s were called many years ago).

My friend in Pennsylvania (a radiologist who lived just down the road from my boss, who is the one who introduced us) raced a 1956 Porsche speedster.  I found this picture online:

Our car number was usually 43, but for this race, held in 1987 at Mid-Ohio race course in Mansfield, Ohio, there was evidently a number 43 already registered in EP (E Production, a class determined by engine size, to keep various makes competitive) so he had to remove the 3 and add an 8, making his number for this event 84.

In addition to the road course at Portland International Raceway there is also a dragstrip for that type of racing and a dirt Motocross course for motorcycles.  This is a 3-shot, left to right panorama of it:

In the last shot you are looking at the “starter stand” and the motorcycles line up on both the left and right side behind the red bars (which are raised up off the ground facing where I was standing).  Those bars prevent anyone from getting a “jump start” and are lowered simultaneously when the starter waves the green flag.  Unlike other race tracks, the bikers leave from here but never return during the race.  Once they are on the track they will cross over this area from left to right (in the center of the photo), around a series of turns and up and down hills, until the checkered flag is waved at the designated Finish line.  The rest of the track isn’t nearly this wide.

As I was leaving PIR on Friday, and had walked over the pedestrian bridge above the track, this race group of “Formula” cars had just been released by the pace car and was coming up to speed going on to the main straightaway.

I am posting this at 845am local time Saturday morning and am getting ready to shower and head for the track!