And no, I’m not being crass.  A “spit” is a beach landform located off coasts or lake shores.  I didn’t know that either until last night when I looked it up.

Sunday, since I didn’t go to Hurricane Ridge in Olympic National Park I decided to head east of Port Angeles to check out some other things.  One place I stopped was the Dungeness National Wildlife Refuge near Sequim (pronounced “Sqwim”), Washington.

After a brief walk on the primary trail I could look out over the spit (kind of a skinny peninsula – a VERY skinny peninsula) and see this lighthouse, probably 4 miles in the distance (the sign said 5+ but I had walked a ways from the parking lot). 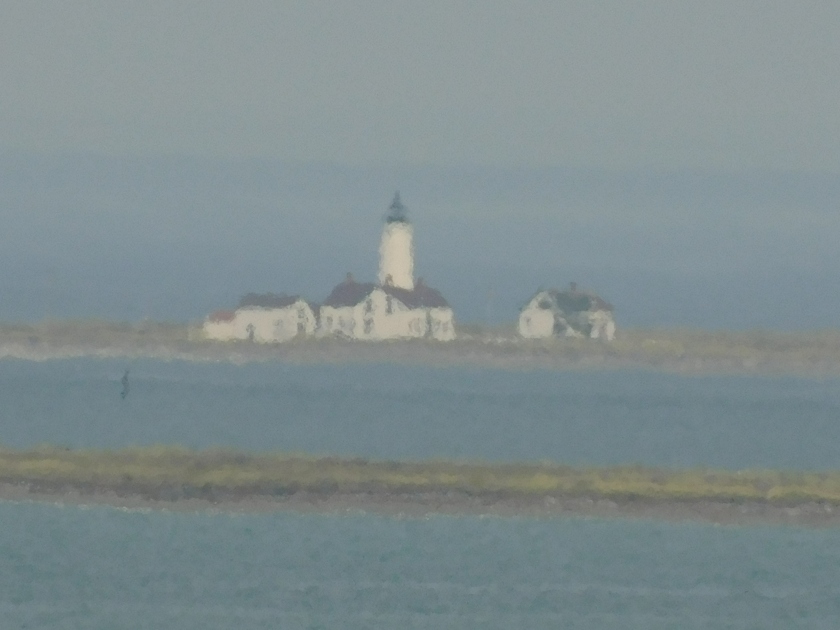 I wasn’t about to march all the way out there so here are some photos I found online:

And if you want to see something really impressive, come out here before wildfire season starts and you may luck out on a clear day to see Mount Baker, which is 10,781 feet tall and, as the crow flies, 75 miles away, in the background:

I have seen several photos and paintings of this and apparently it is not trick photography or special effects.  I also saw a similar photo of the Coast Guard base in Port Angeles, which is out on a peninsula, with Mount Baker in the background.  Not too shabby, eh?