The second day of my Memorial Day long-weekend stay in Las Cruces, NM I headed about an hour and a half northeast of Las Cruces to the Alamogordo vicinity. I had one specific destination in mind but discovered several other interesting things during the day so I was very happy I had the luxury of time on my side.

I had made a quick 4-day to trip to New Mexico back in 2014. I have a friend who lives in the central part of the state (his father was a tax client of mine) and I decided to fly out for a few days after tax season. My friend asked me what I planned to do while I was here and I rattled off about a half dozen destinations (including Alamogordo). There was a pause and Mark said “Uh, you realize those places are all pretty far apart?”. He was right and I never made it to Alamogordo, Carlsbad or Roswell – a situation I would resolve here in the next few days…

Anyway, today I drove past White Sands which I visited yesterday and continued up to Alamogordo. Once there I proceeded east a few miles to Cloudcroft, then south about 20 miles to the tiny town of Sunspot. 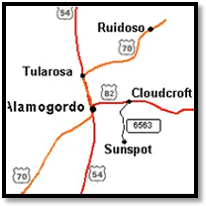 Here is the view as I ascended up the mountains towards Sunspot (elevation 9,147 feet). The white in the center portion of the photo below may appear to be low clouds but is actually White Sands National Monument! 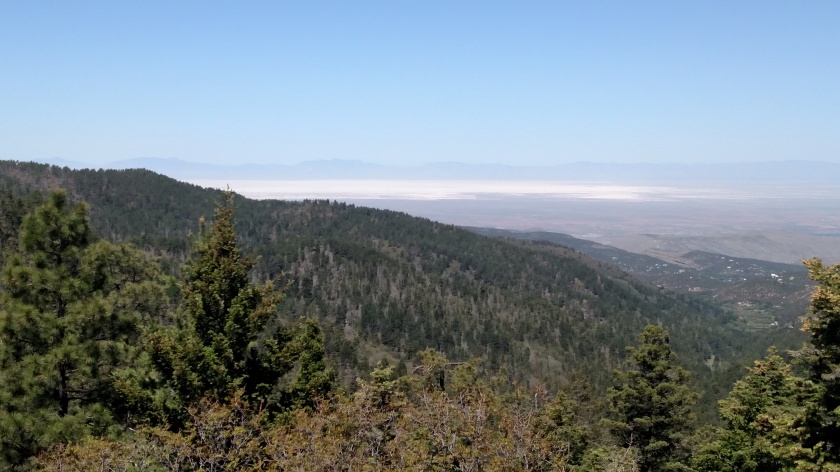 Here are some of the things I found when I arrived at the Solar Observatory:

This is the main telescope, used to study the sun: 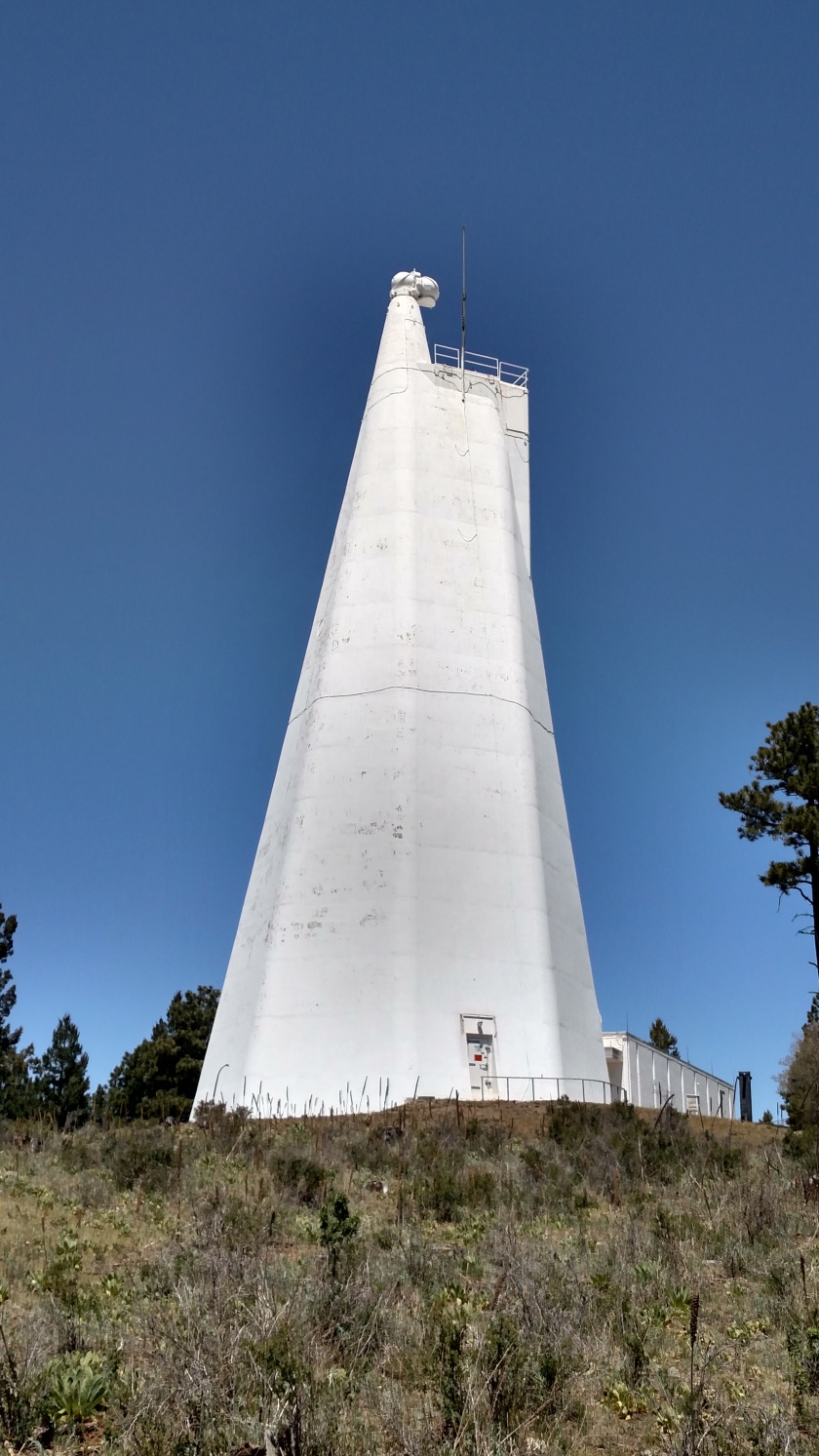 The visible part of the telescope enclosure rises 136 feet above the ground. Like an iceberg, however, this instrument is located mostly under the surface! The telescope inside the white enclosure continues down 193 feet underground. 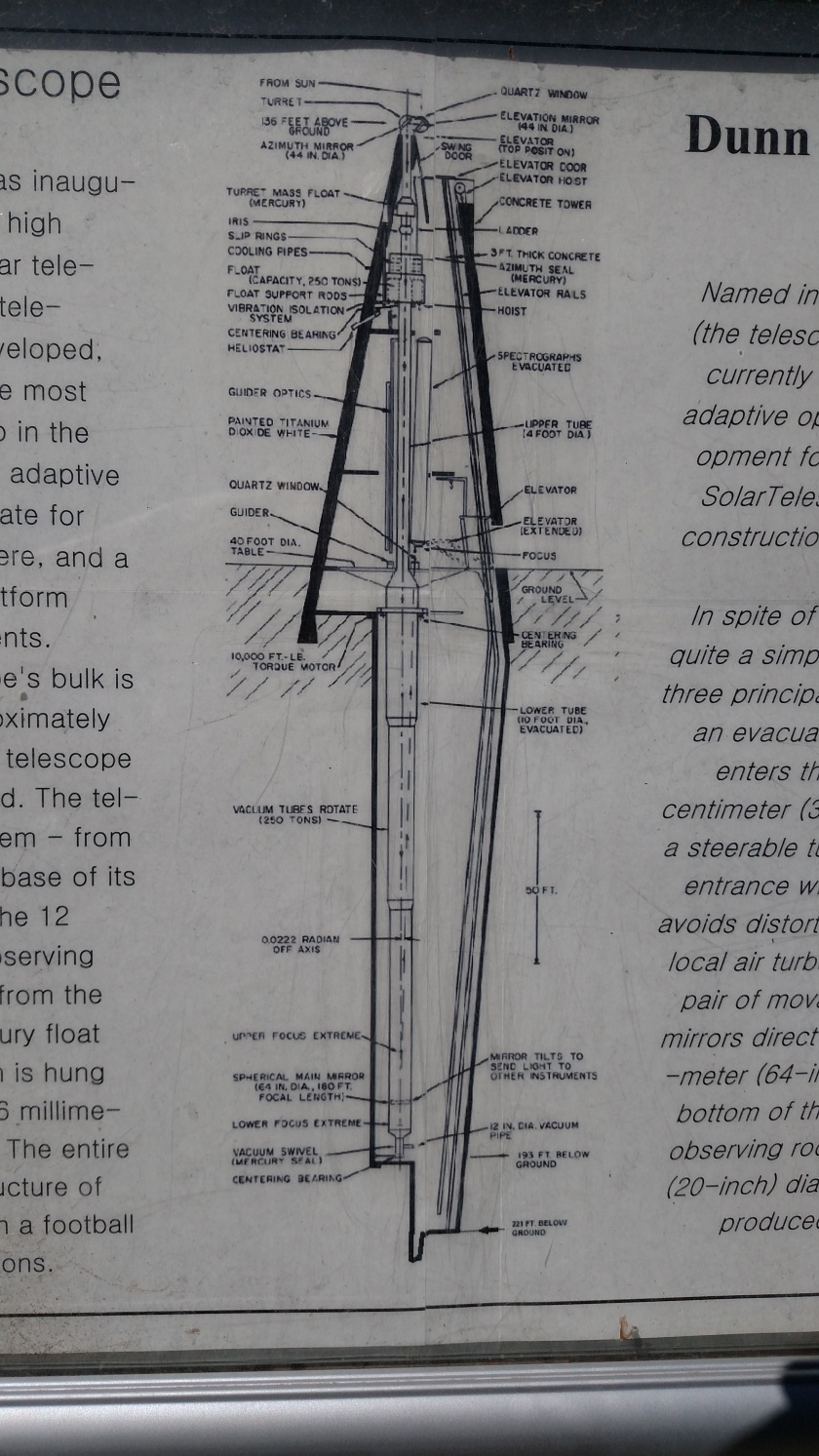 Elsewhere on the property is a solar telescope originally located at the South Pole. 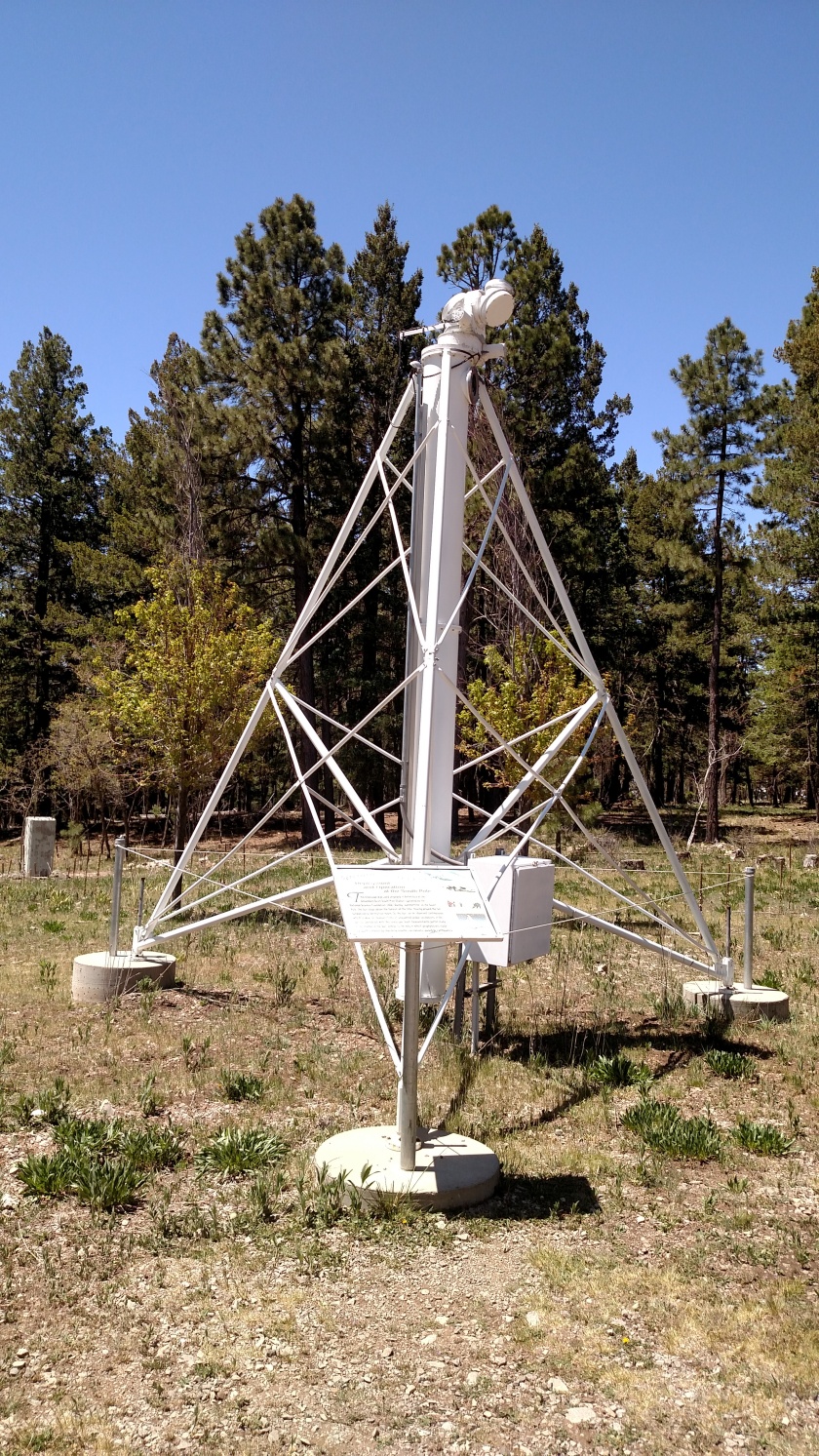 During “summertime” down there the sun is above the horizon 24 hours a day so scientists have lots of time to study it (and the atmosphere isn’t as disrupted). There is now a much more modern and sophisticated solar telescope at the South Pole.

The Sunspot Solar Observatory was in the news in September of 2018 when the FBI mysteriously swooped in and told all the employees they had to leave the property immediately. They kept the facility closed for about 10 days and were very tight-lipped about what was happening. Theories ranged from aliens, a chemical leak (various gases are inside the telescope enclosure) or a terrorist threat. Turns out it was nothing quite as unusual or scary as those things. Seems a janitor at the facility was using their computers to collect and distribute child pornography!

As I was leaving the Observatory I saw signs for another facility, the Apache Point Observatory, just up the road. That facility is private so there is no public access but I did see this photo outside the gate which shows some of the telescopes there: 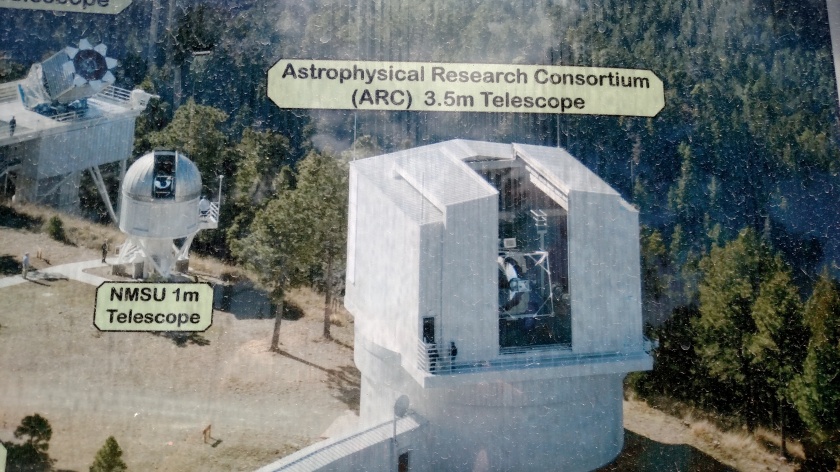 Among other things, this facility uses lunar laser-ranging to measure, with millimeter level accuracy, the precise distance to various instruments on the moon.

As I drove back to Alamogordo I stopped at “The Lodge,” a beautiful hotel in Cloudcroft which has hosted many celebrities and is rumored to be haunted. 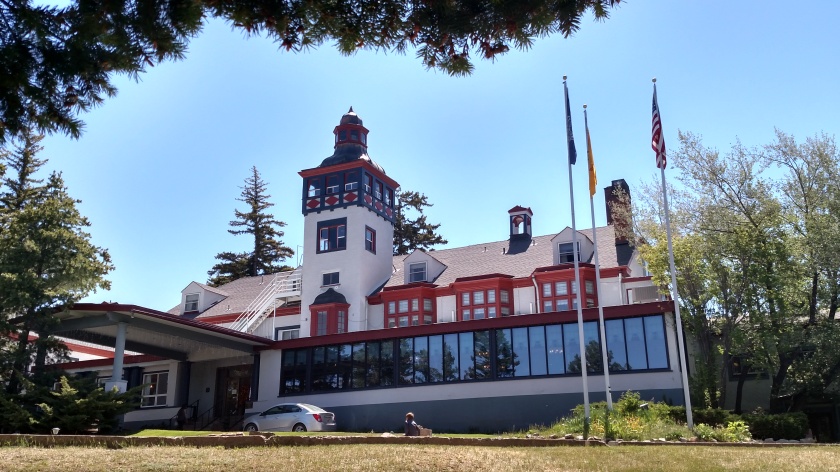 Lastly, the Alamogordo area is home to many large farms which grow pistachio nuts. I stopped and sampled many flavored varieties and bought a few pounds (which didn’t last long!). 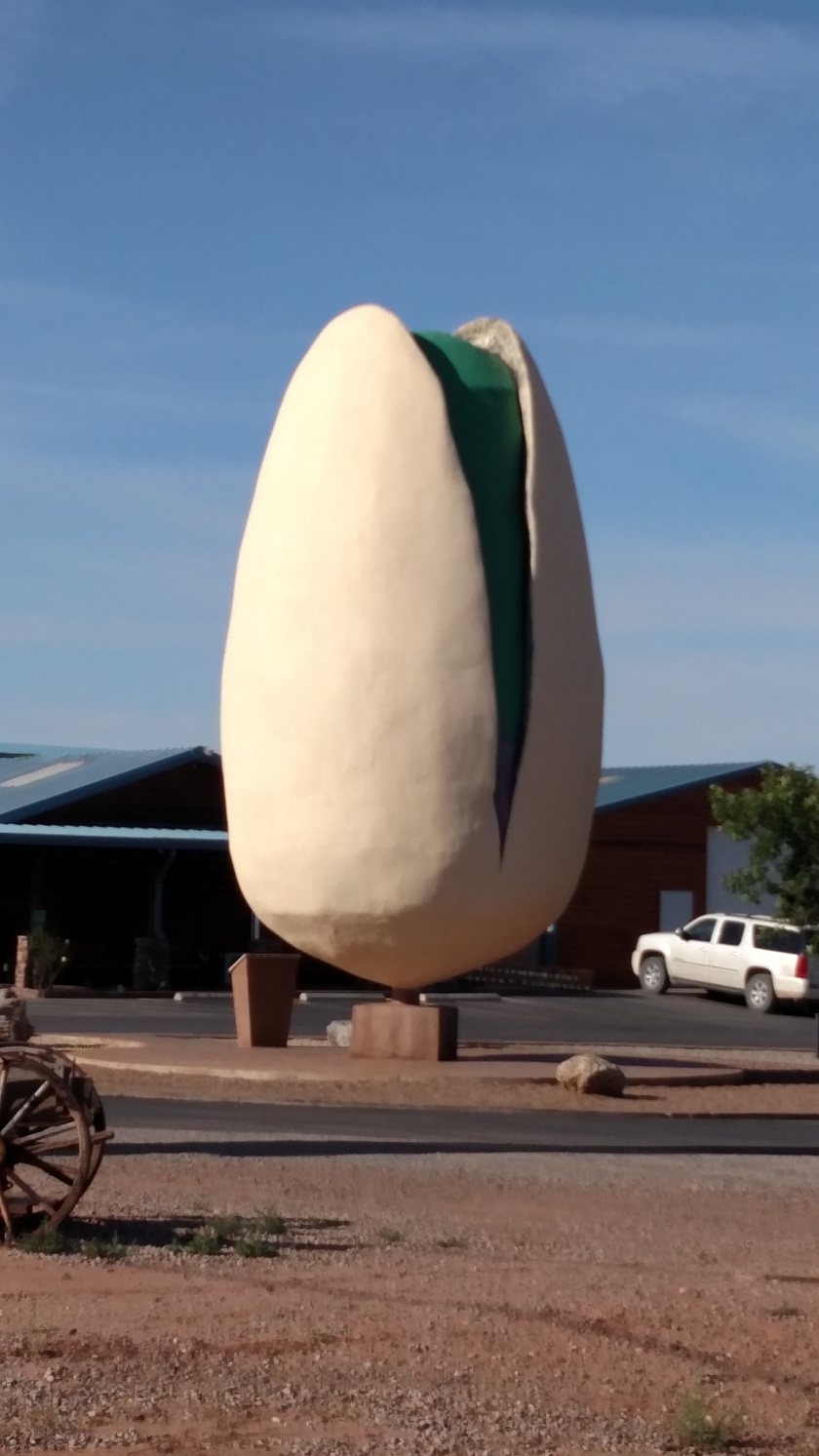 I headed back to Las Cruces, drove down to La Mesilla for dinner and I got home in time to watch the Coke 600 race from Charlotte. A very full and rewarding day!

My first full day in Las Cruces, New Mexico I headed about an hour northeast on Route 70 to spend some time at White Sands National Monument, a 224 square mile area on the southeast end of the massive White Sands Missile Range.  I had stopped here briefly back in 2014 when I made a very ambitious tour of New Mexico (a story I will share in a future post) and had only spent a few minutes at White Sands.  Today I had more time to enjoy the area. 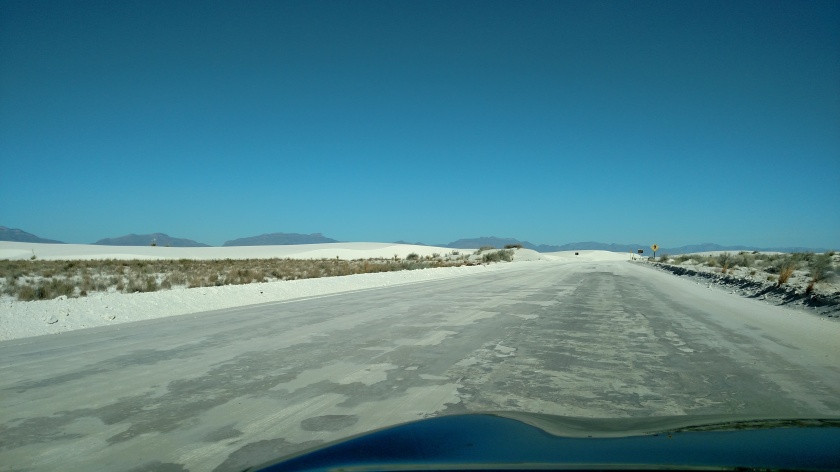 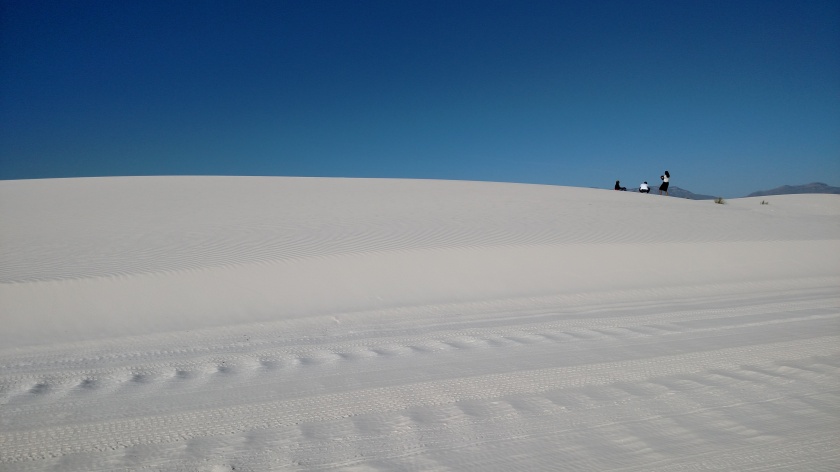 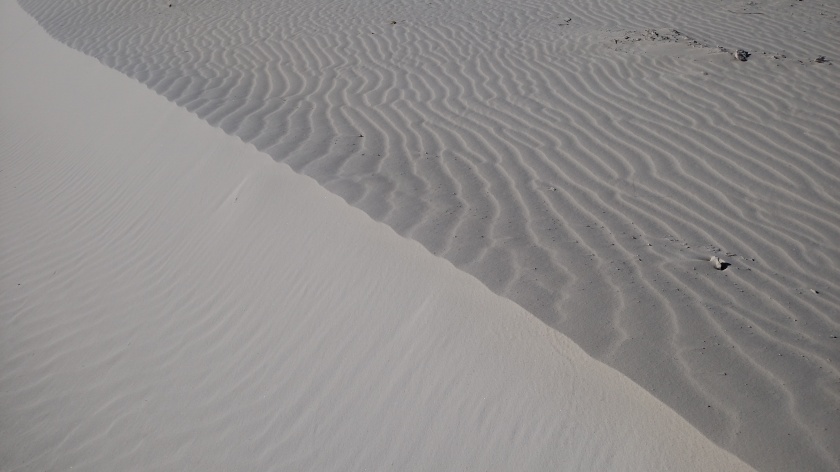 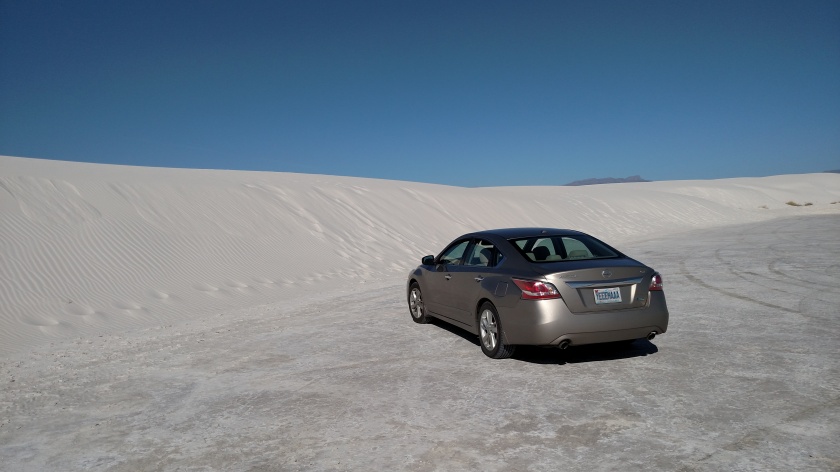 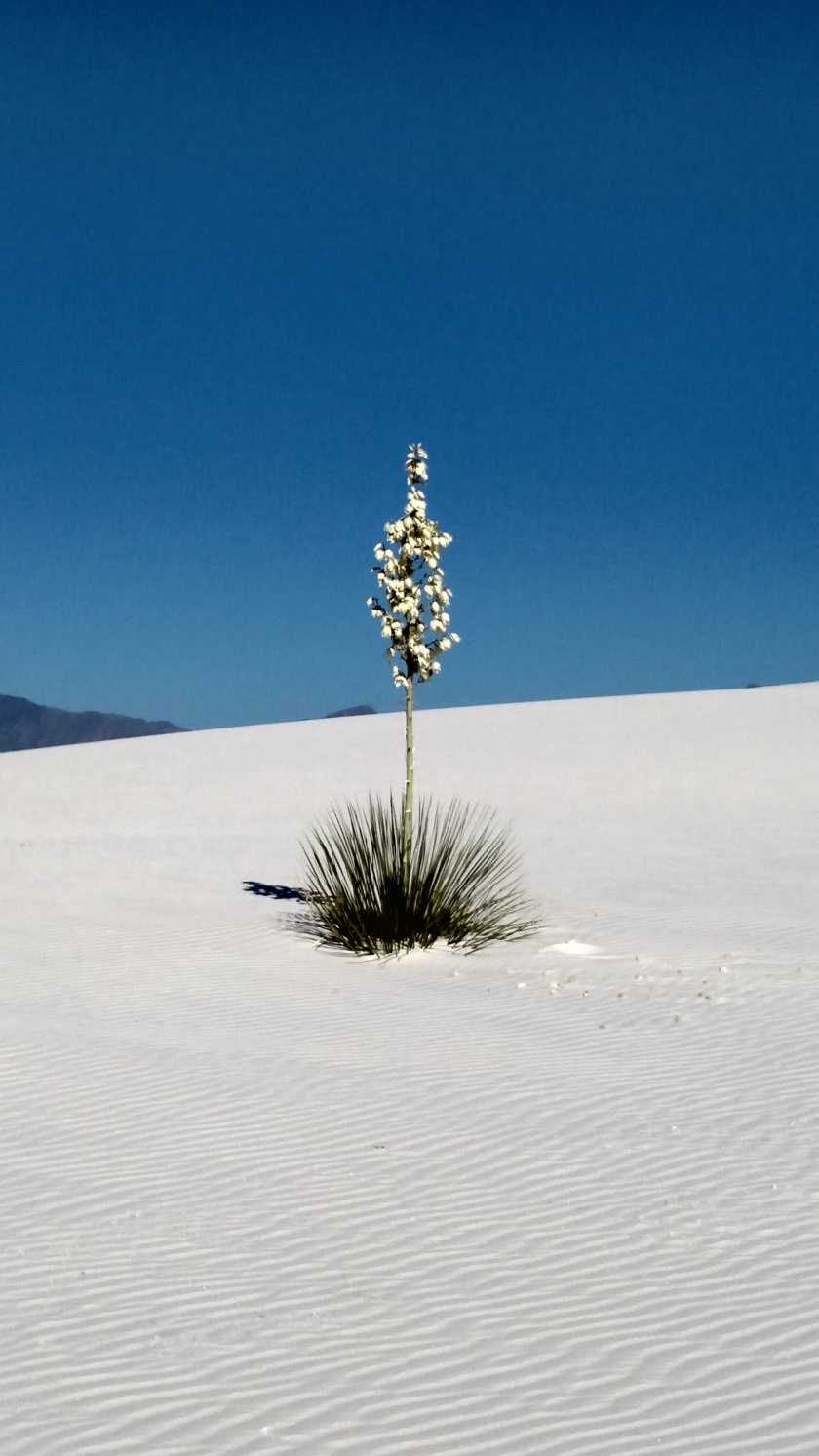 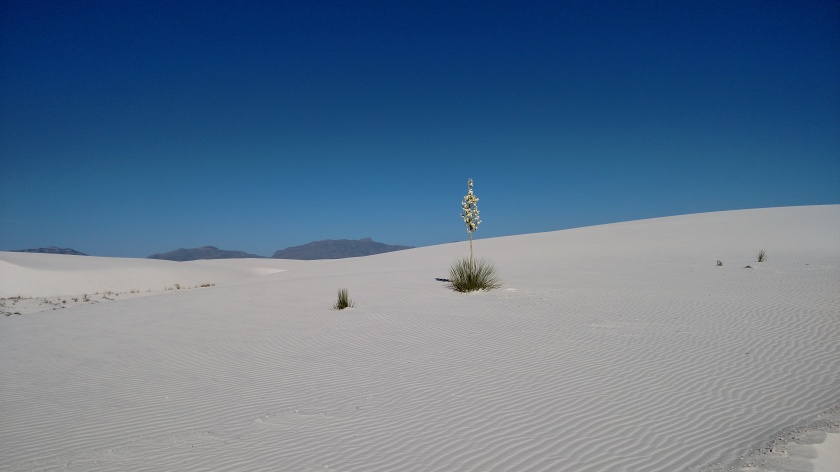 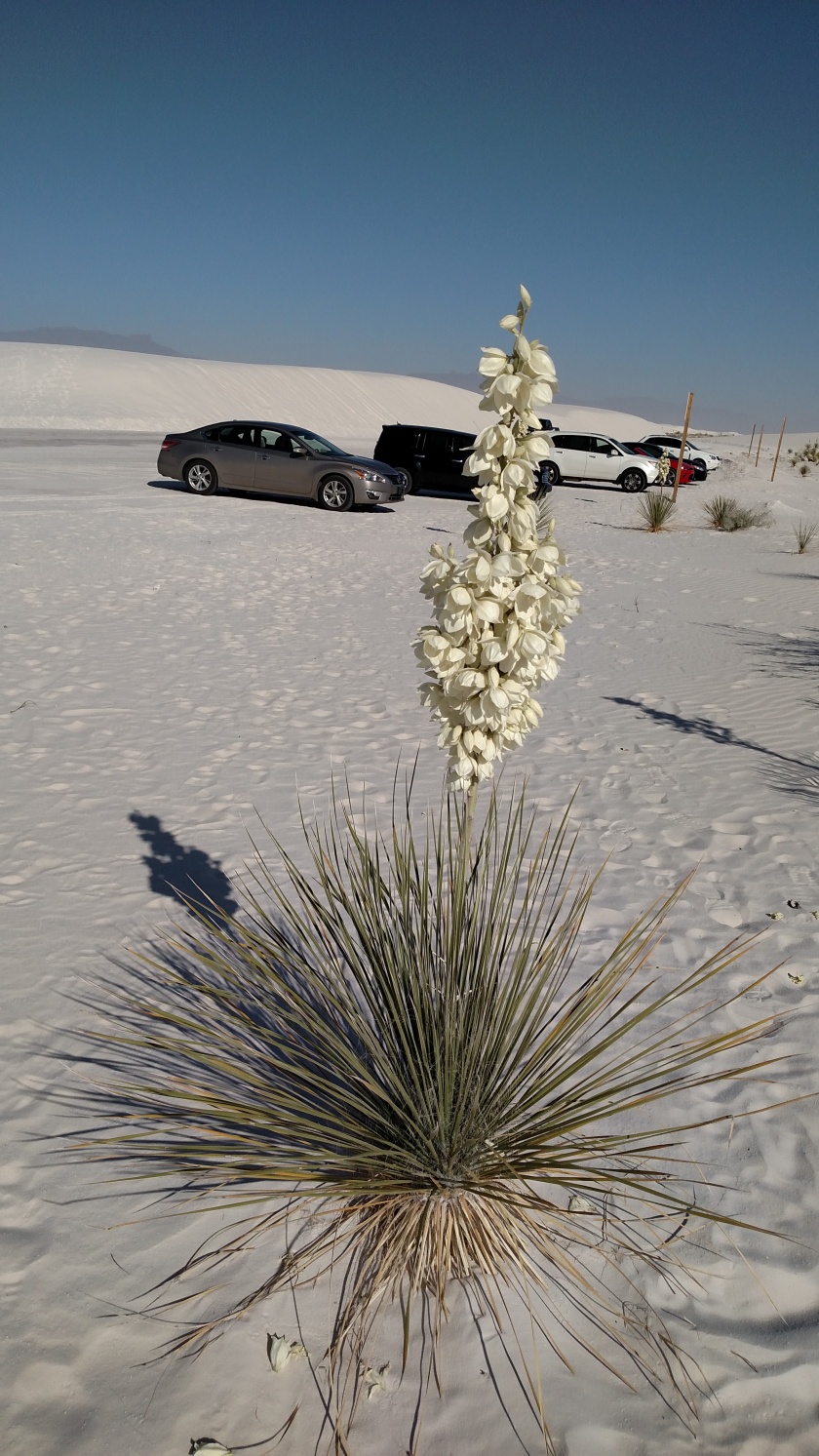 While I was stopped in one of the parking areas I spotted the same guy I had spoken with about a week ago while visiting the Marfa Lights Viewing Center.  He was parked in an adjacent parking area with shelters for primitive camping, which he was doing during his driving tour of the western US.  He lives in Pennsylvania and drives a distinctive orange Jeep with a red kayak on top.  I marched across the sand dunes to say hello (again) and marvel that I had now seen him twice in one week.   Small world…

I would be spending 4 nights in Las Cruces and as I did in Alpine, Texas, chose the city for it’s strategic location to things I wanted to visit while I was here.  I actually spent very little time in Las Cruces (a beautiful town), only being there to sleep, eat and watch the two big NASCAR races held in Charlotte, NC (on TV.  I confirmed the fact that I could watch the races while I was here when I made the reservation).  The young couple I stayed with had lived in the Charlotte area for a number of years so they understood my NASCAR obsession.  They had a beautiful new townhouse on the northeast side of town and were the ones who told me about Meow Wolf, a funky art complex in Santa Fe, NM which I’ve posted pictures of in the past.

This was the view as I approached my Airbnb the night I arrived: 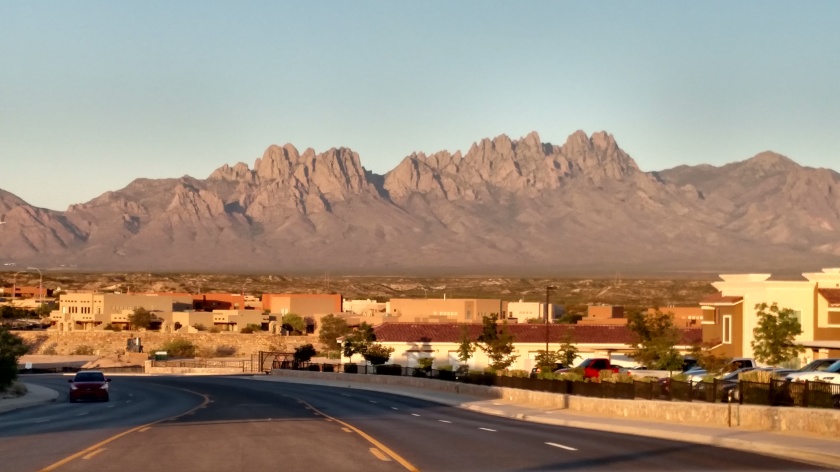 And here is a map of the area to get your bearings:

Not sure why El Paso isn’t on the map (it is just to the right of Ciudad Juarez, on the United States side of the Rio Grande river.  CJ is in Mexico).  The city of Las Cruces is shown by the red dot in the center of the map.  Other places I will be visiting while in the area are White Sands National Monument (above the highway between the two occurrences of the words Las Cruces), Alamogordo (above the higher words Las Cruces), the Gila Cliff Dwellings (due north of Silver City on the left side of the map) and Hatch, located just northwest of the red dot.

After checking in at my Airbnb I headed back out to an area southwest of town called Old Mesilla Village (aka La Mesilla).  Most of the restaurants which were on my short list were located there, as well as many historic buildings and the San Albino church: 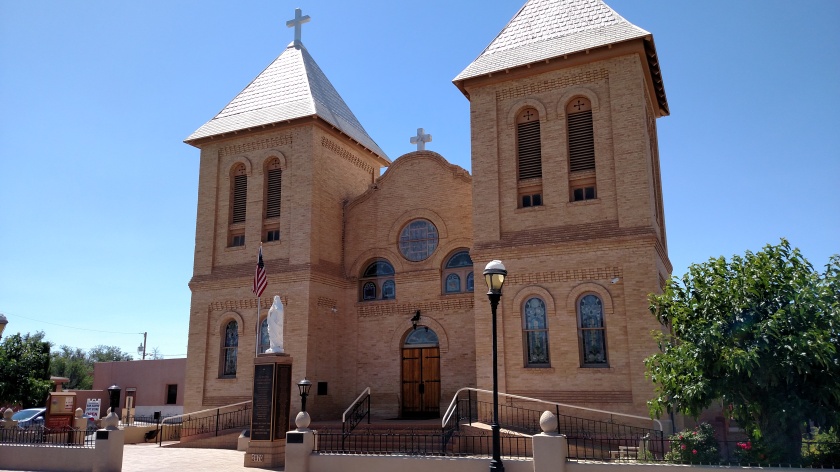 There were some interesting birds in huge cages at the restaurant I chose to eat at the night arrived and I’d be back down to Old Mesilla Village several more times during my stay. 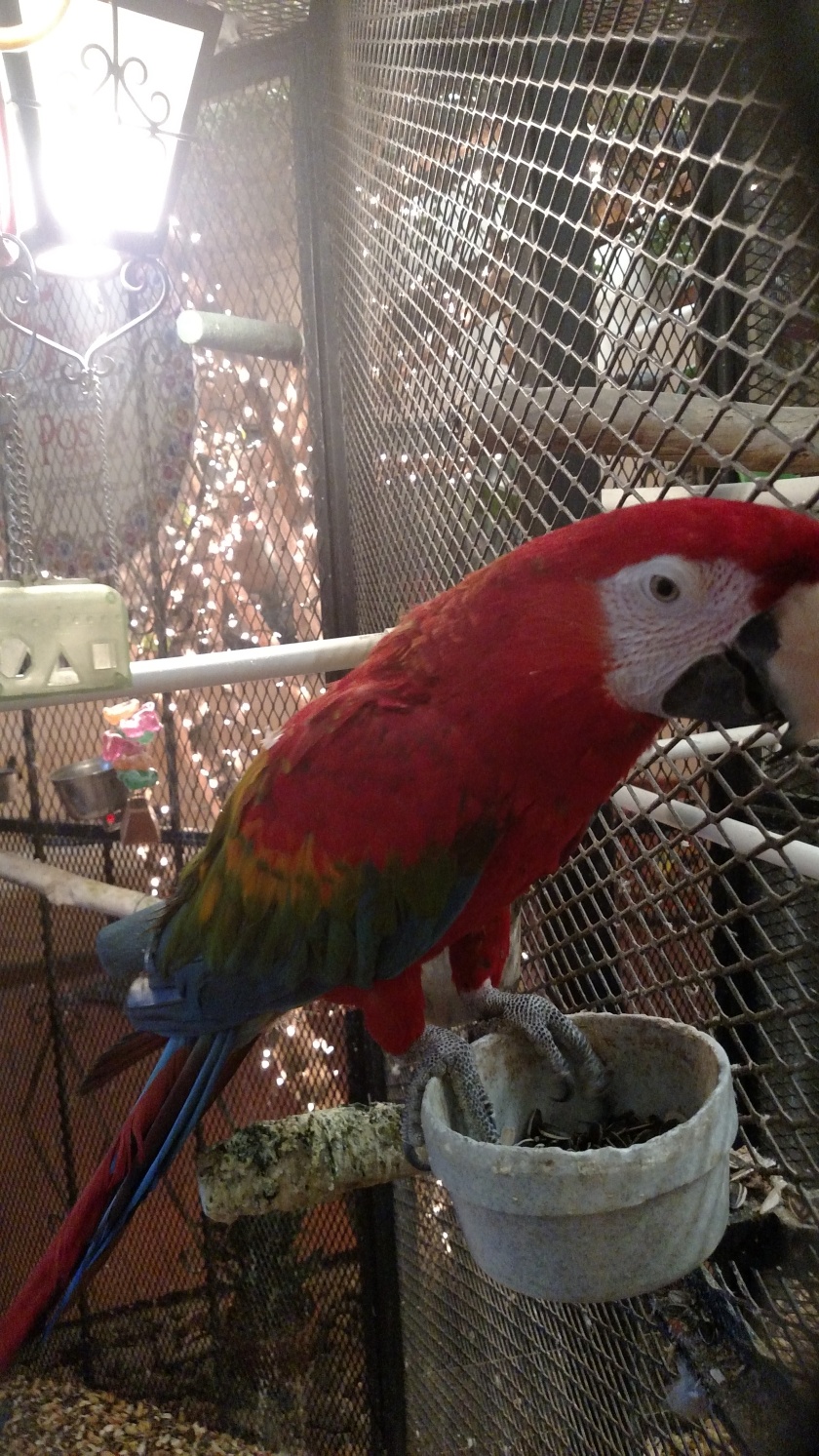 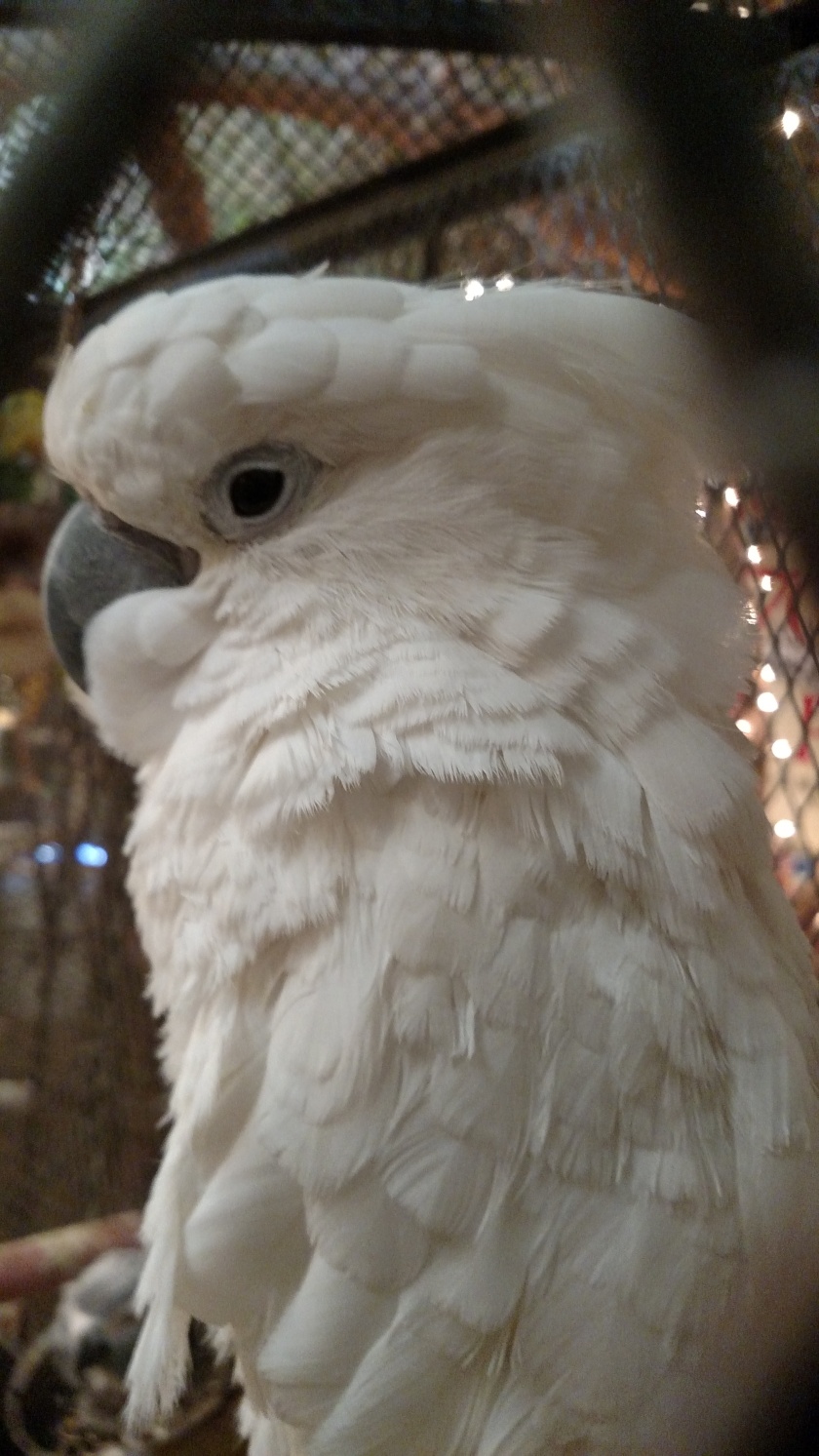 Old Mesilla Village was a beautiful place to walk around in the evenings and I highly recommend checking it out if you are ever in the area. 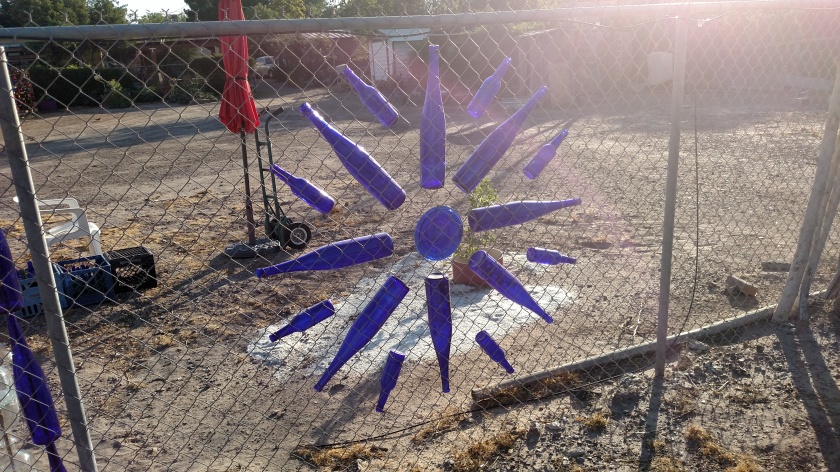 One day I drove south of La Mesilla on one of my scenic roads and saw acres and acres of pecan groves: 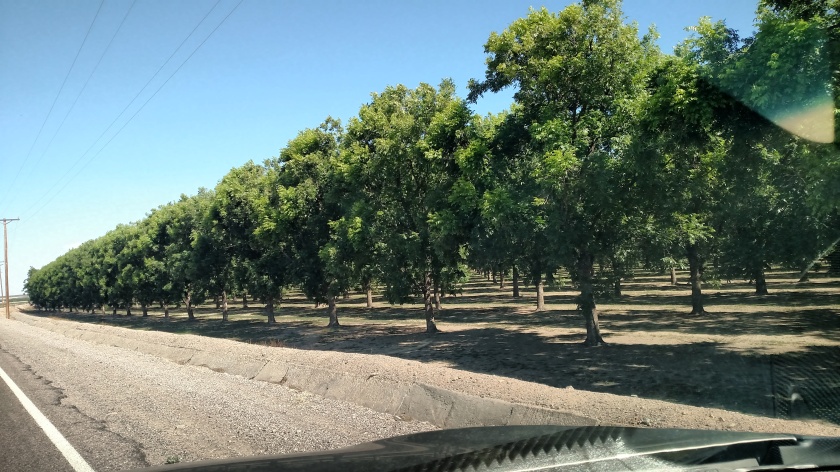 There were also many places where avocados were being grown.

Well, I finally made it!  About 220 miles west of where I had been staying in Alpine for the past few nights, and after wrapping up some loose ends over that way in the morning, I continued west on Route 90 to where it intersects (the dreaded) Interstate 10 and eventually planned to pass through El Paso, which is as far west as you can go in the state of Texas (having entered the state about as far east as you can go), on my way to Las Cruces, New Mexico (about 45 miles further up the interstate) where I would be staying for the next 4 nights.

Because of my loose ends earlier in the day it was a little after 3 o’clock local time when I arrived in the El Paso area and, seeing as this was the Friday going into Memorial Day weekend, I checked my AAA TourBook (at a highway rest stop, not while I was driving) and decided to get off the highway to avoid rush hour and see a little bit of downtown El Paso.  That turned out to be an exercise in frustration for two reasons – first, they were doing street construction and I had no idea where I was and at times I couldn’t go where my GPS was trying to guide me.  Second – the city was preparing for a big Memorial Day celebration and had other streets closed as well.  Not a good combination.

Well, after parking a few blocks away  and continuing on foot I did finally make it to my primary goal – the El Paso Museum of Art. 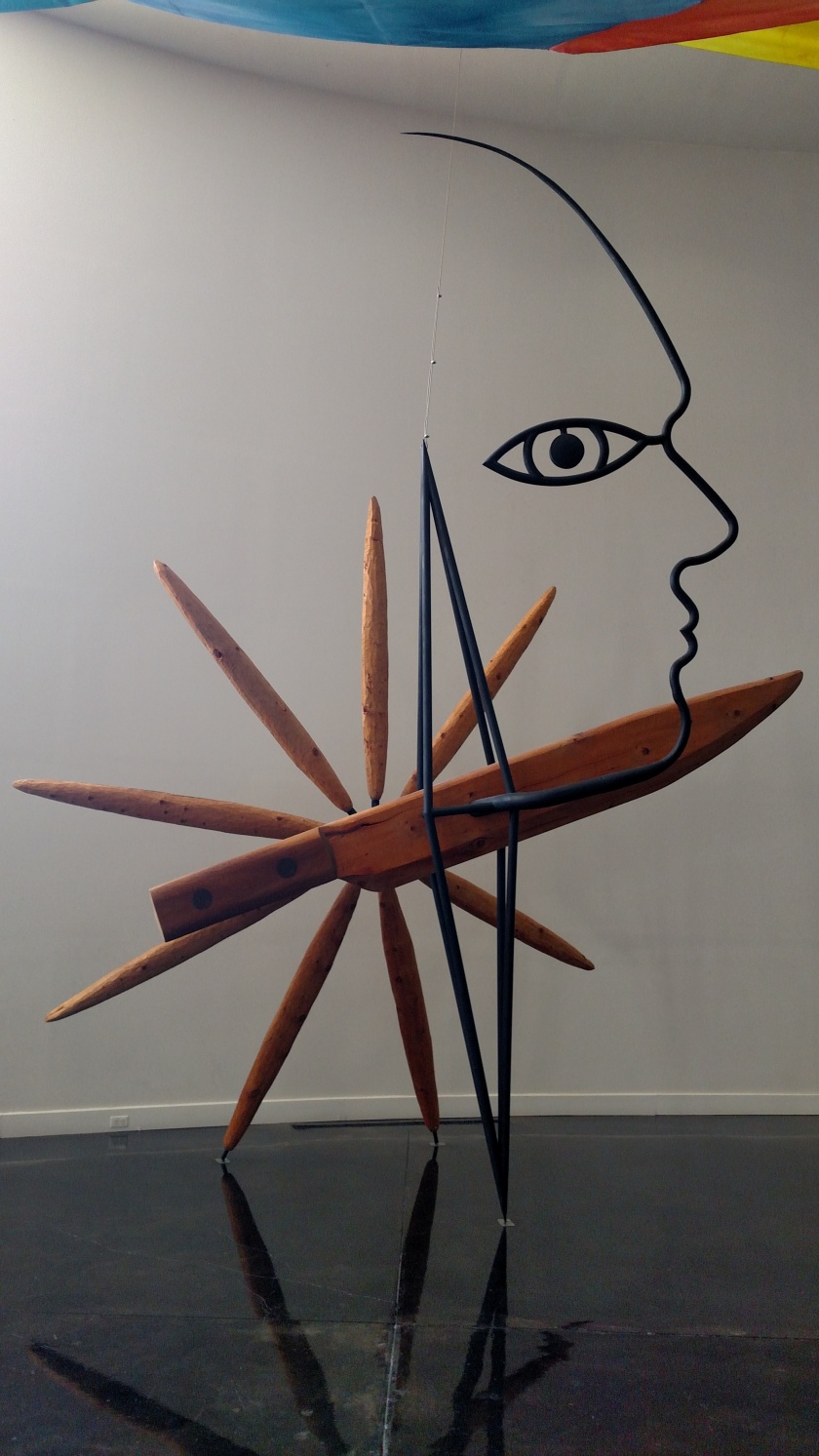 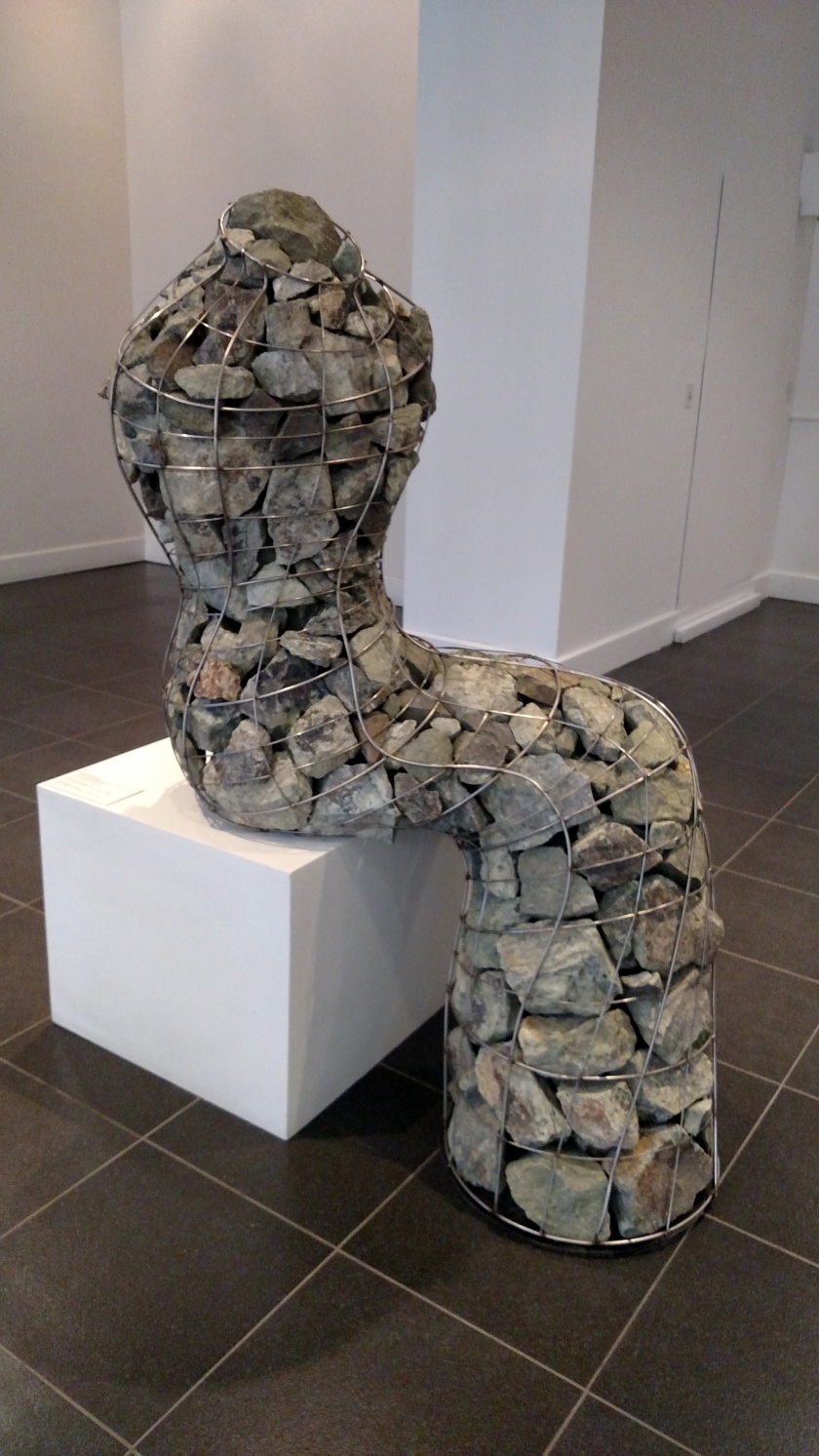 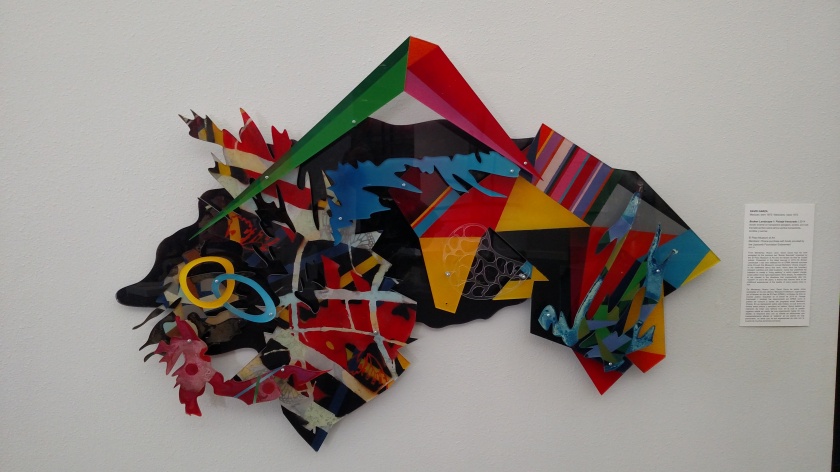 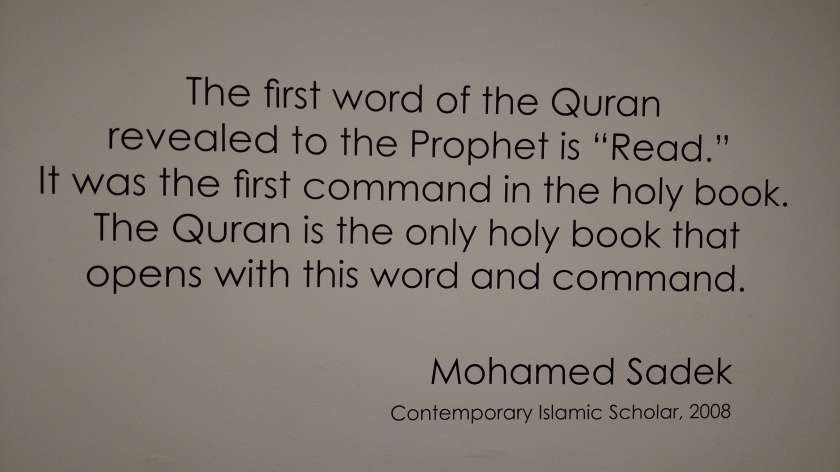 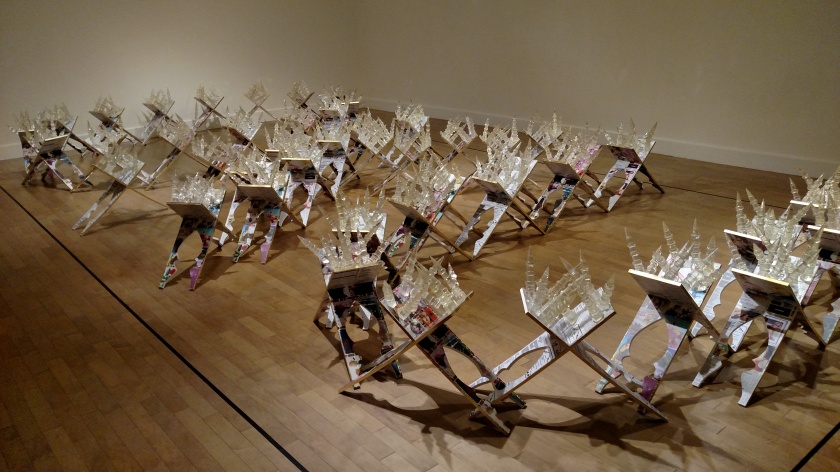 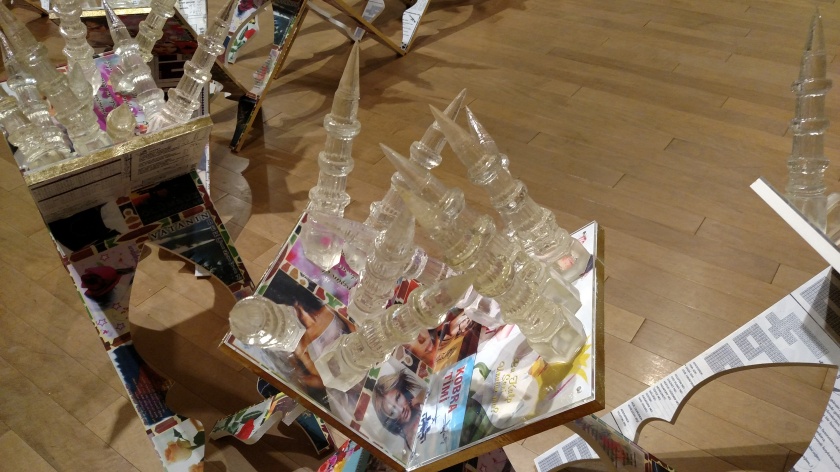 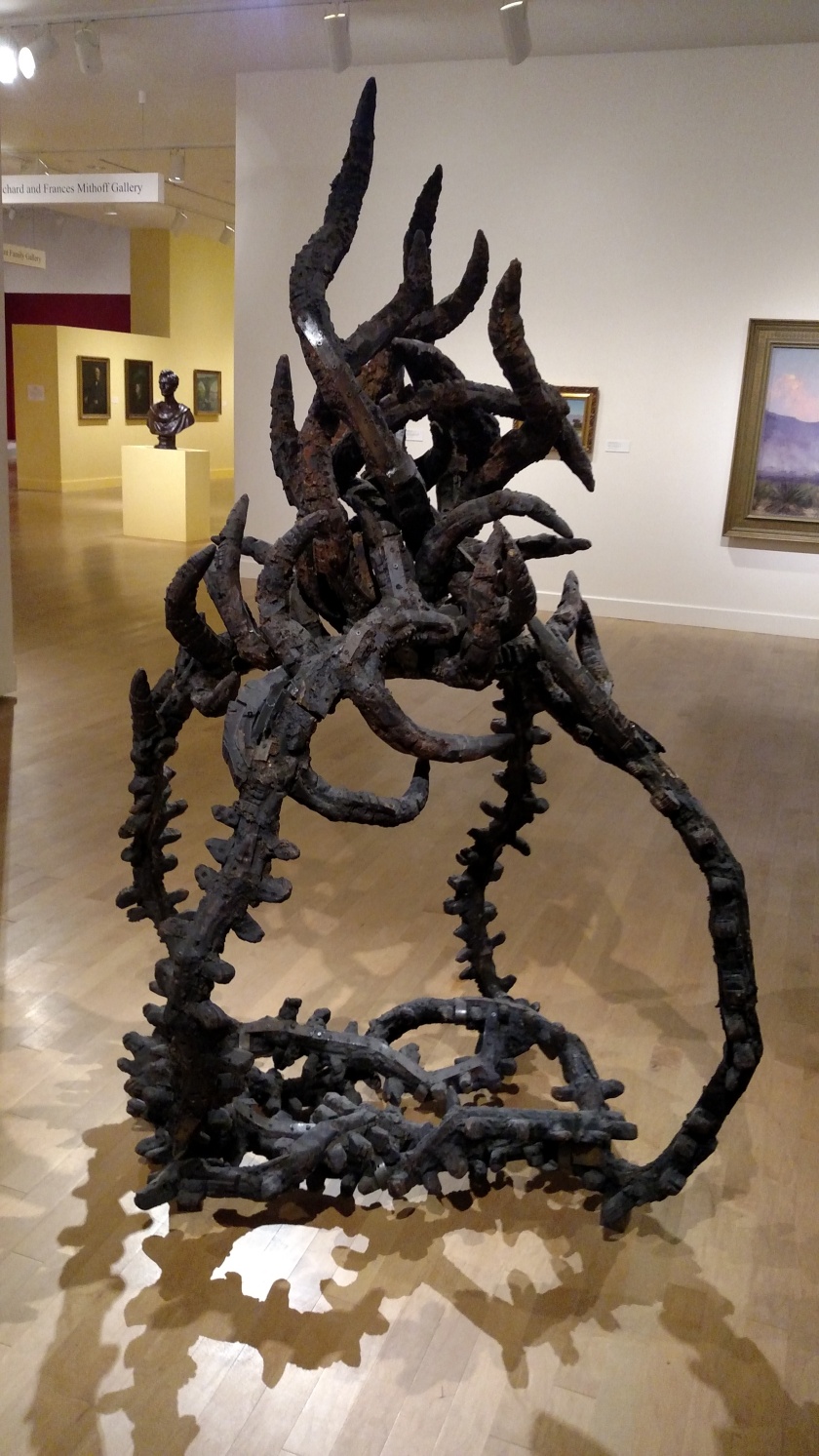