After I determined that the UFO-related venues in Roswell were somewhat of a bust I was very pleased to find somewhere else to spend some of my afternoon in town – the Anderson Museum of Contemporary Art.  Here are some of the things I saw there:

First, an example of kinetic art.  Imagine the 3-D canvas which, rather than being flat, is comprised by a full-length series of the letter W sticking out at you across the entire width.  I wasn’t very good about taking photos of the little “card” next to the art pieces which credit the artist and explain what the item is called and constructed of.  One famous artist whose work contains many, many examples of this style is Yaacov Agam who, as I write this, is still living.  If you ever get a chance to see his work in person, do so!

In this work, when you view it from the left side you see mainly blue lines with smaller white spaces: 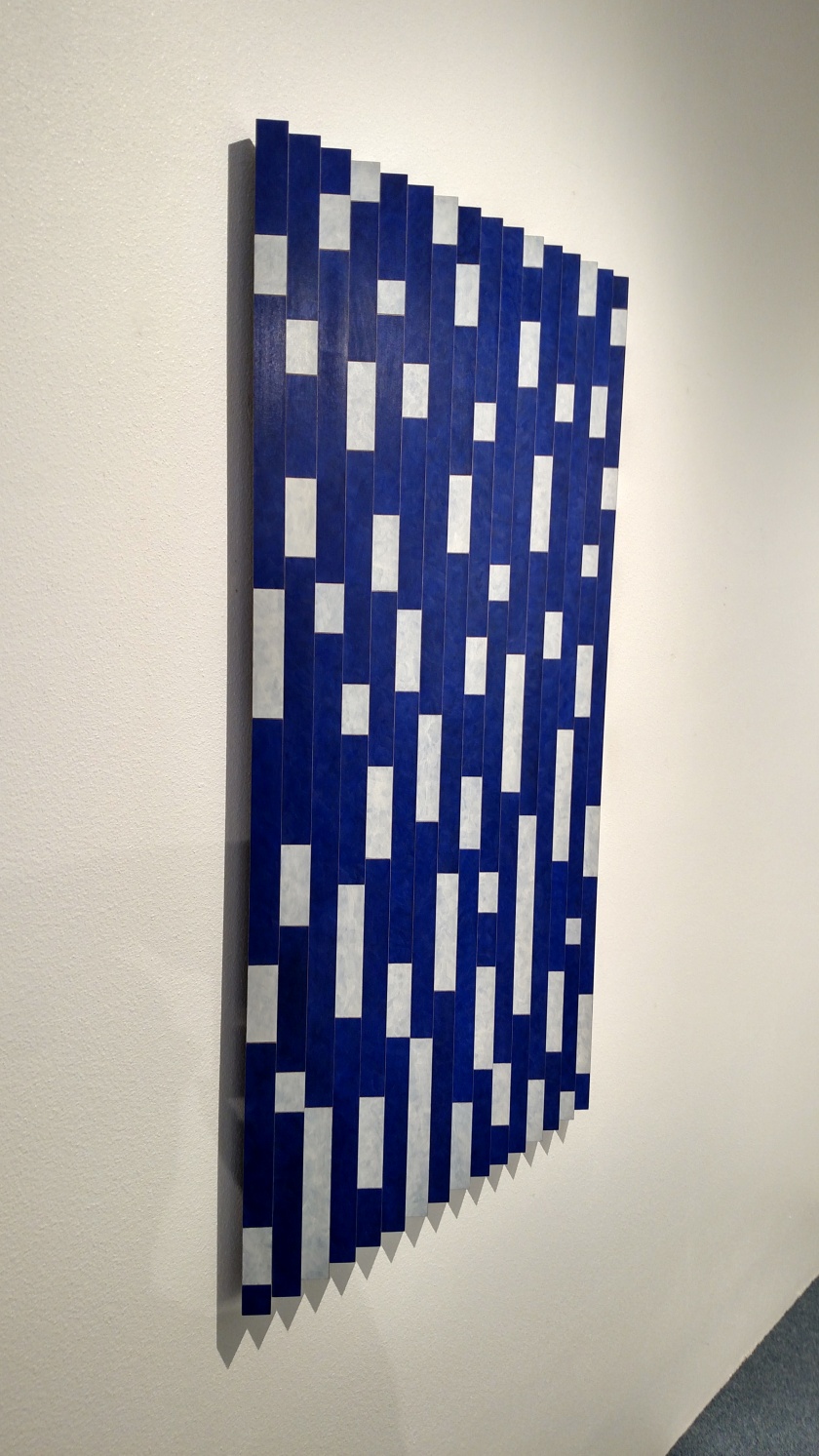 From the right you see mainly white with smaller areas of blue:

When viewed head-on you see a mixture of the two.

AND you now see what appears to be three dimensional blocks, suspended in space.  Also, look at the shadow at the bottom to see what I was referring to with the “W””s.

Now, imagine that concept with colors, shapes or pictures and you’ll see examples of Agam’s work.

Here are some three-dimensional wooden shapes which fit together like pieces of a jigsaw puzzle and are contained within a cradle (the first two) or a frame:

Here is an image created by making cigarette burns in a piece of paper: 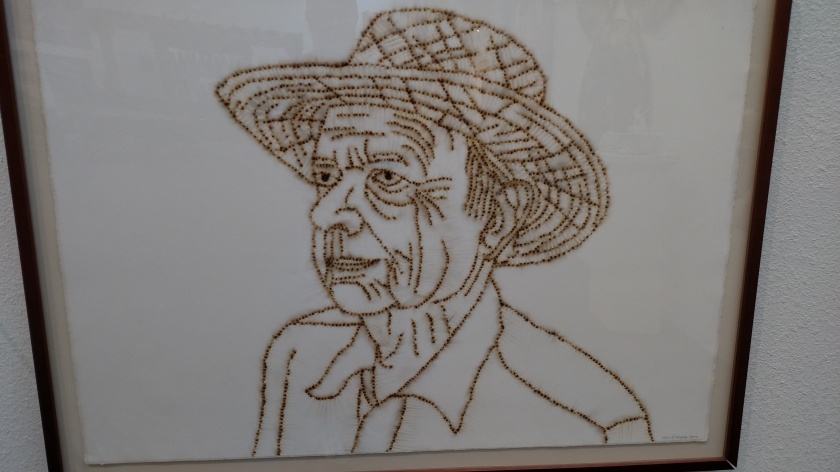 And finally, this colorful and shapely mask which is ceramic:

After I determined that the UFO-related venues in Roswell were somewhat of a bust I was very pleased to find somewhere else to spend some of my afternoon in town – the Anderson Museum of Contemporary Art.

I was intrigued by these sharks made largely from golf bags:

And this one made from a handheld vacuum cleaner: 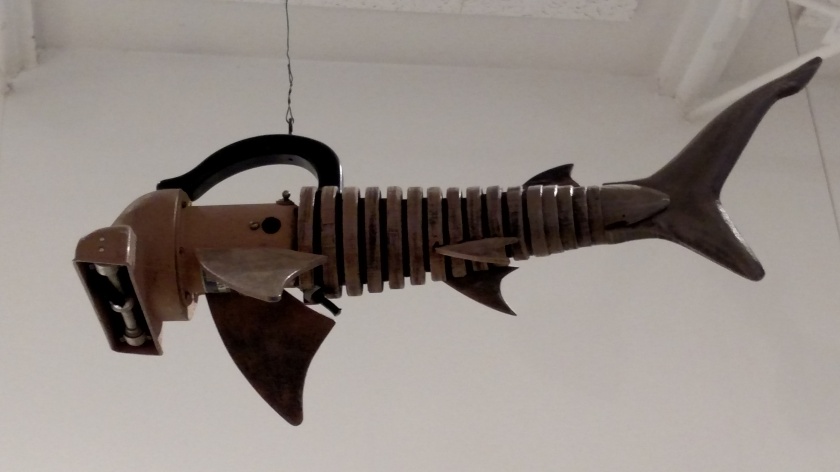 And this spider made from a toaster: 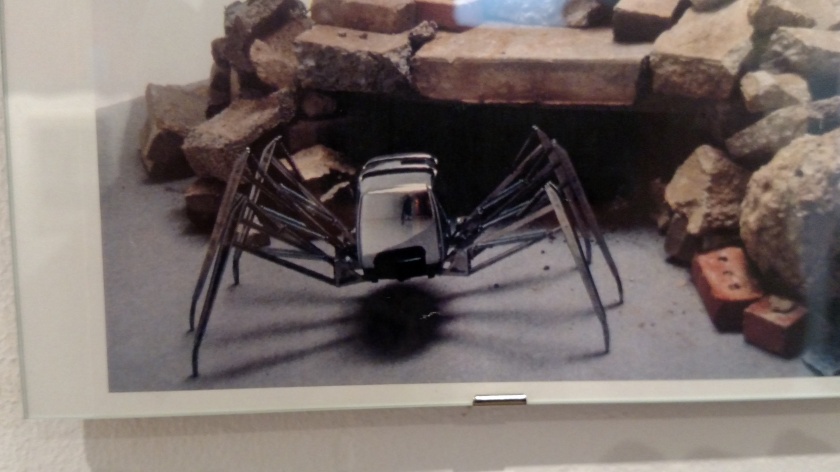 And this spaceship made from a model of an old-style mobile home:

After having been in the Las Cruces area in southwest New Mexico for the 4-day Memorial Day holiday I now shifted my attention to the southeast portion of the state, specifically Roswell and Carlsbad, two of the towns my visit to which were abandoned during my tornadic visit to the state in 2014.

From Las Cruces I traveled northeast past Alamogordo and Cloudcroft to the Ruidoso area (far left on the map above) and drove a scenic loop up there in the mountains.  From there I proceeded east to Roswell.

Those of you who know me are probably not surprised to hear that I was somewhat of a UFO geek in high school (late 60’s, early 70’s).  For UFO enthusiasts Mecca is Roswell, New Mexico.  In 1947 the US government allegedly recovered a flying saucer which had crashed near Roswell, along with the bodies of the crew.

When I discussed a possible visit to Roswell with a friend who lives in New Mexico back in 2014 he said “don’t bother going there – it’s just a tourist trap”.  I told him “Mark, I can’t go to southeast New Mexico and not have aluminum foil on my head”.   I didn’t plan to be there all day but I at least needed to make an appearance.

Well, I finally made it to Roswell:

I spent about two hours going through a UFO museum downtown and walking up and down the main street observing how the local merchants were using the notoriety.  Can’t say I blame them.  I did have a great lunch at a nice little restaurant and after having complimented the kitchen staff before I left was given an additional salad to take home for dinner (the owner literally tracked me down on the street as I was walking back to my car, talking to fellow travelers who had eaten at the table next to me).

Despite not having very high expectations I must say I came away VERY disappointed.  Something I learned, which perhaps I already knew deep in my mind, was that the UFO didn’t actually crash in Roswell but about 75 miles northwest, closer to Corona (where, ironically, my friend Mark lives with his wife).

I had spent a night in their home back in 2014 (when he convinced me to go north to Santa Fe and Taos rather than south to Roswell and Carlsbad) and he never mentioned this fact.  The reason Roswell gets the notoriety is that the “remains” of the craft and crew were supposedly taken to the closest military base at the time, the Roswell Army Air Field.

On my way to Roswell, New Mexico from where I had been staying in Las Cruces I discovered this Wildlife Refuge northeast of Roswell:

Among other things, this facility boasts the largest variety of odonates in North America, around 100 different kinds.

The difference? you ask…

At first I thought it was a boy/girl thing but the actual distinction lies in a physical trait other than gender. When at rest, a dragonflies wings remain perpendicular to it’s body. A damselfly, on the other hand, sweeps it’s wings back almost parallel to it’s body when at rest. 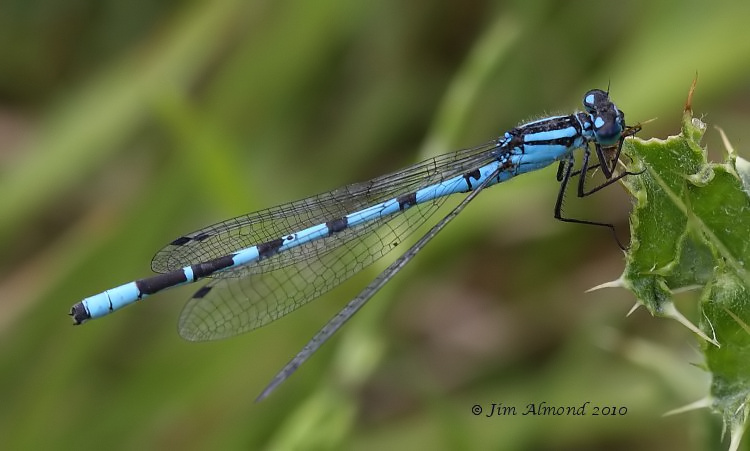 I use this particular damselfly as an example for a particular reason. Last year, when I was in northern California, I spent a few days at the Tule Lake National Wildlife Refuge and saw literally hundreds or thousands of these, or ones very similar, as I drove around that facility. These are quite small, about the length of my little finger, and the ones I saw were electric blue – very striking. I tried taking photos but they were so small that both of my cameras chose to focus on the background rather than the subject.

I’ve been wanting to post this for the past two weeks as I have been seeing lots of dragonflies during my morning walks around a local pond, but for the life of me I couldn’t remember where in my travels I had been to this facility before. As I was combing through my Roswell photos for the next few posts – bingo, there it was.

The title of the post doesn’t mean to state or imply that damselflies are in any way endangered (indeed, the ones at Tule Lake appeared to be quite prolific). I was merely trying to come up with something to pique the reader’s interest.

Oh JohnBoy, you’re such a tease…..