Sunday morning I left Truro to head southwest along the coast on some scenic roads.  It took me about 6 hours with stops, and after checking in to my Airbnb in Granville Ferry (east of Digby) I went back out to explore some more before the sun went down.

I took a picture of the section of the Nova Scotia map I was given upon entering the province which shows this part of my adventure.  The roads marked in yellow are scenic roads (in the province’s opinion) and mostly coincide with my “bible,” a book my friends Eric and Shawn gave me listing scenic drives in the Maritime provinces – the basis for this trip.

The map also shows (in yellow) the route I took yesterday – at the top right corner of the photo.  Today’s trip goes right to left along the lower yellow line. 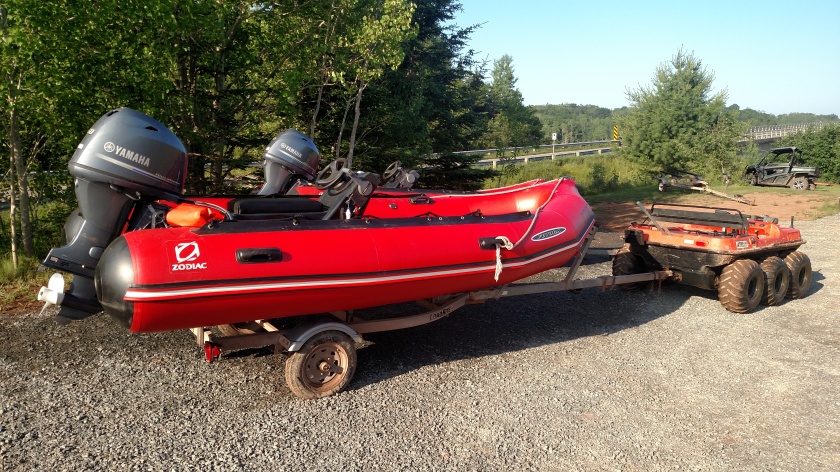 People were arriving at a little after 8 AM to gear up at a rafting outfitter on the river.  Later today they will be going out in these zodiac boats. 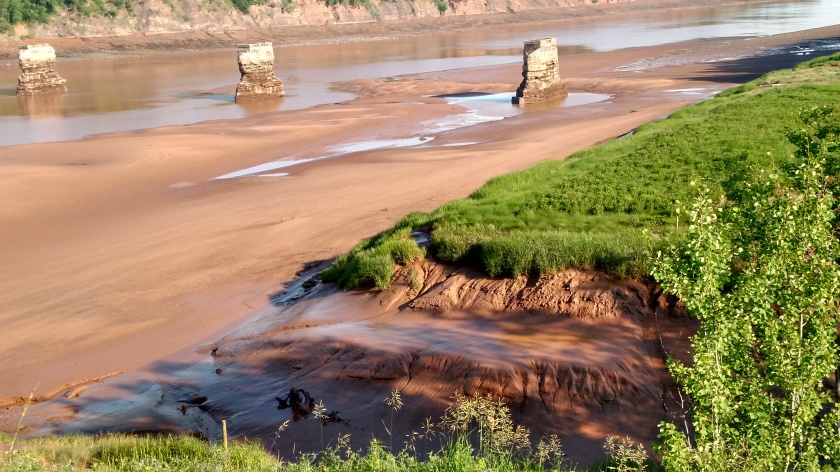 It doesn’t look like much now but high tide will occur here a little before 1 PM so business, and the river, will be picking up.

Further up the road I stopped at Burntcoat Head:

If you thought the 46 foot rise at Hopewell Rocks was impressive, this is the world record holder at a whopping 53.5 feet!

If you look closely at the left side of the photo you will see a man walking.  At high tide the water will come up to just below where I was standing as I took this photo.

Here is the view looking left, towards Minas Basin (and ultimately the Bay of Fundy): 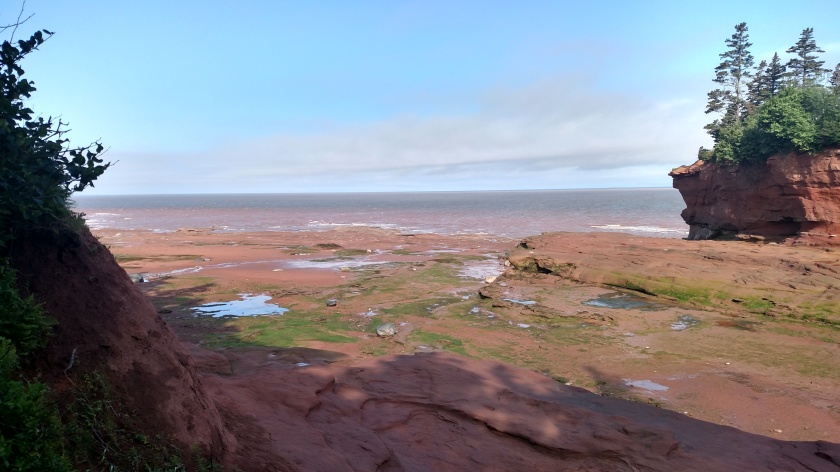 And looking right, towards Cobequid Bay while ultimately becomes the Shubenacadie River shown above. 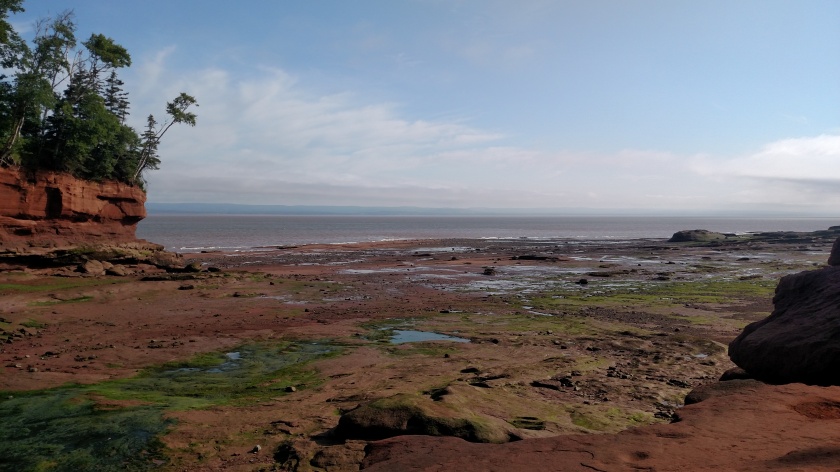 All that open area will be filling with water over the next 4 hours or so and the formation will become a giant “flowerpot planter!”.

Further up the road I stopped near Cheverie, where schooners used to be built. 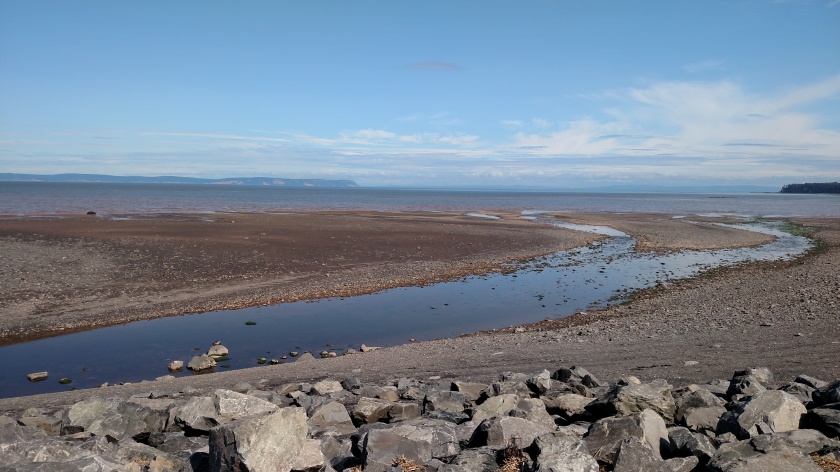 The road then took me south to an intersection with Route 1 which would ultimately take me to Digby.  I am driving on this older, original road.  There is a newer, controlled access highway – NS-101 which runs parallel and is much faster, but I prefer the slower, scenic road.

After I got on Route 1 I drove through the town of Windsor, which is arguably the “Birthplace of Ice Hockey”.  My “bible” tells the story of Thomas Chandler Haliburton who wrote about students at nearby King’s College playing “hurley”.  I have seen lots of outdoor hockey rinks which are flooded with water in the winter for people to play hockey.  It is strictly BYOZ (Bring your own Zamboni).  I have also seen lots of Curling clubs (the Olympic sport where a large puck-like object is slid over the ice and people with little brooms brush the ice frantically in front of it trying to control the trajectory.  At least I think that’s how it works…)

Mr. Haliburton was also a writer and is credited with coining the phrase “it’s raining cats and dogs”.

Moving on up the road I took a side road (on MY list from the “bible,” not shown in yellow on the state map) to The Lookout.  The road took me up to almost 1,000 feet and provided this fantastic view of Minas Basin and the farm valley below: 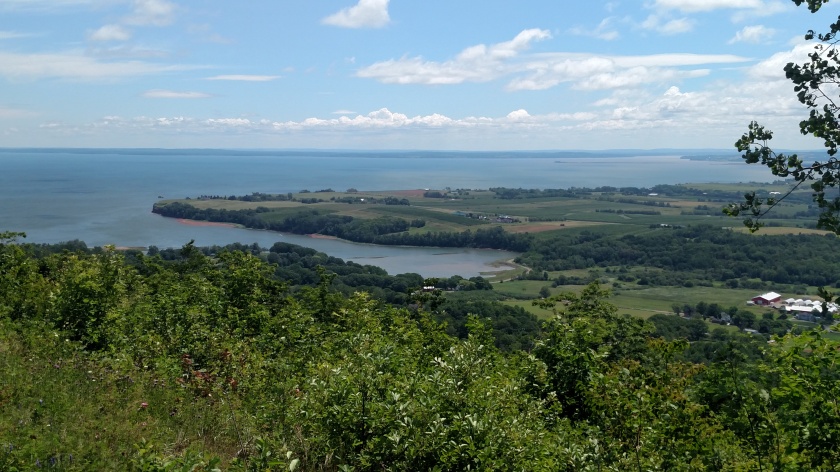 I then took a side road off the side road and drove out to Halls Harbor (another book suggestion): 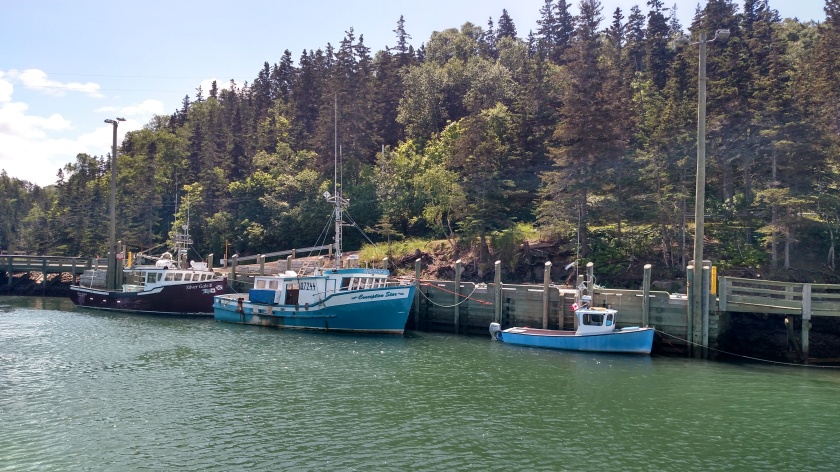 I saw this sign with photos showing the harbor at high and low tide.

I then drove back down to Route 1 and continued west to Granville Ferry where I checked in to my Airbnb, then drove over to Digby for dinner and to pickup maps and info at the Visitor Center there.  Digby is known for harvesting scallops and clams.  Here is a photo of their harbor as seen from a gazebo next to the Visitor Center.