Monday morning I left Kanab to head south to the North Rim of the Grand Canyon one last time before going on to Flagstaff, Arizona for 4 nights.  These were some of the things I saw before and after leaving the Park.

Before getting to the entrance of North Rim I went through the little town of Jacob Lake.  I have actually been spending a good bit of time there lately, trying to get a photo of an animal which is unique to this area.  I only saw three, and never was in a position to get a good photo, so I have resorted once again to the miracle of the internet.

This is a Kaibab (pronounced k-EYE-bob) Squirrel, found only in a very small area between the town of Jacob Lake and the North Rim.  This area is within the Kaibab National Forest which has lots of Ponderosa Pine, a type of tree favored by these squirrels.  The three I saw were all larger than a normal squirrel, had dark brown (almost black) fur and big, puffy snow white tails.  A ranger I spoke with in the Park said she had seen a lot fewer squirrels this year than she has in the past, which is perhaps why I had such a hard time finding any.

The rest of these pictures I took myself.

As I was traversing the 7-mile stretch of Forest Road 205 for the umpteenth time looking for the elusive Kaibab Squirrels, I came across this group of Moo Cows.  This time I was way outnumbered (there were more off to the right) and they looked like they meant business.  I figured they would probably block my way until I gave each of them some moo-lah and all I had were large bills, but after taking a few photos I started driving forward slowly and sure enough, the seas parted and I was on my way. 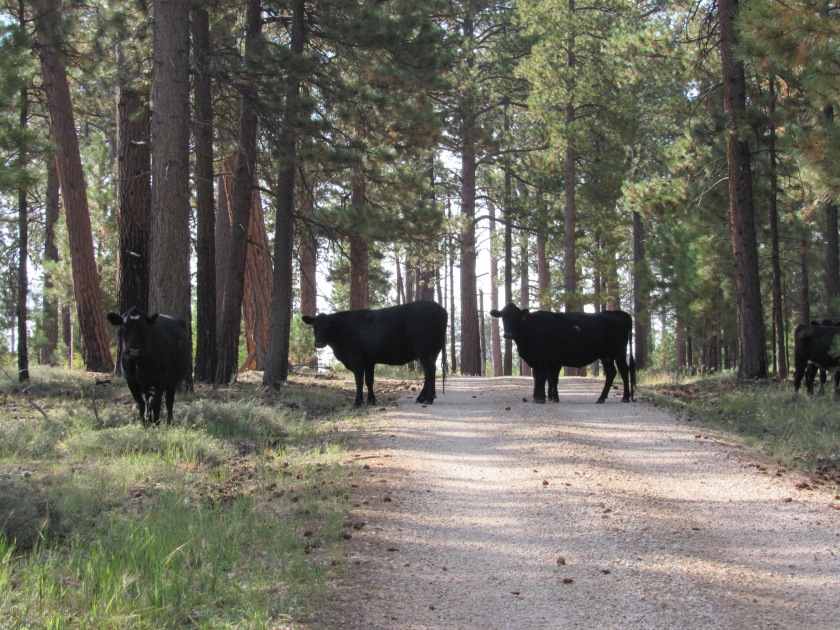 Further on down the road I saw what I am quite sure is a California Condor circling slowly off to the right of Route 67.  He had been circling quite low but by the time I turned around and went back he had gone up much higher.  It it hard to follow a bird in flight when you are zoomed in on it but I was able to get one clear picture.

It was huge, and had feathers extending out from the tips of it’s wings which is why I think it was a condor and not just a run-of-the-mill vulture.  I would see more condors once I got down to the South Rim of the Grand Canyon.

This is the sign they use in Arizona to indicate you are on a Scenic Byway.

Before getting to the Park entrance I saw some more colorful Aspen trees, as well as a few with oddly shaped trunks. 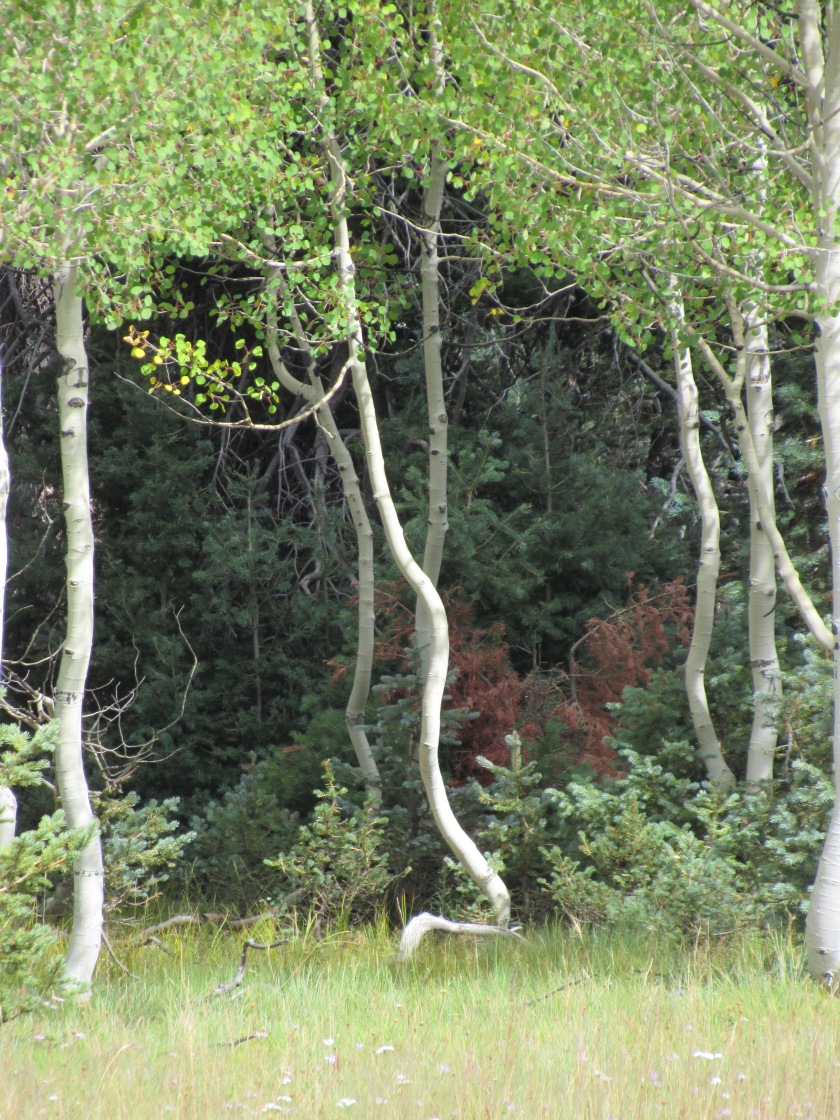 About a quarter mile after passing through the entrance to the North Rim there were two large herd of bison, close to a hundred on each side of the road.  They seemed oblivious to the tourists who were all stopping to take pictures (the ranger at the gate told us to stay in our vehicles but not everyone listened.  I did – I took these by holding the camera out the driver’s side window, or looking through the open passenger’s side window). 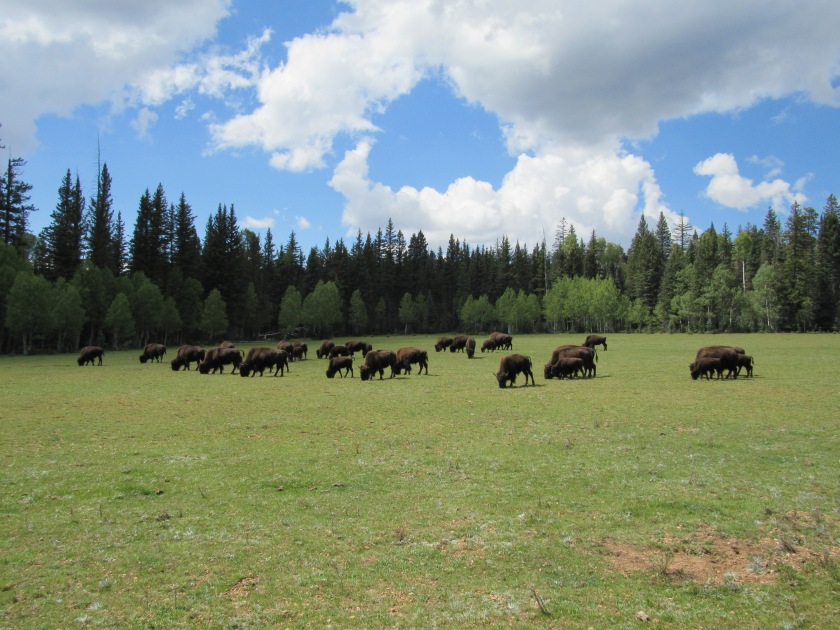 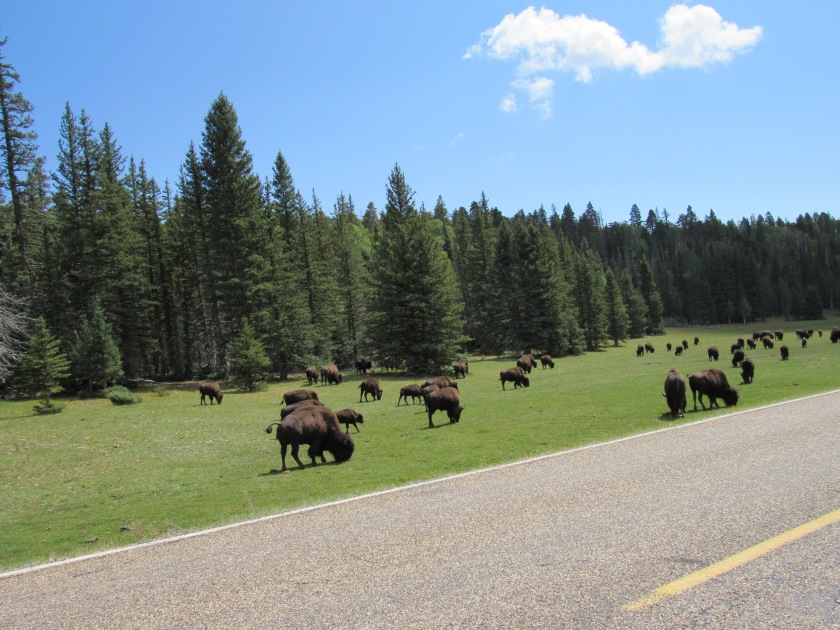 Further on down the road I passed a tiny pond off to the left side of the road.  What caught my eye was that the edge seemed to glisten, as if the sun was reflecting off shards of glass.  I went back and got out of the car, trying to capture that effect on camera but was unsuccessful.  What I was seeing was, in fact, the sun reflecting off small spots of water around the perimeter of the algae which was on the surface of the pond.  The sun did give the entire algae layer a silvery glow. 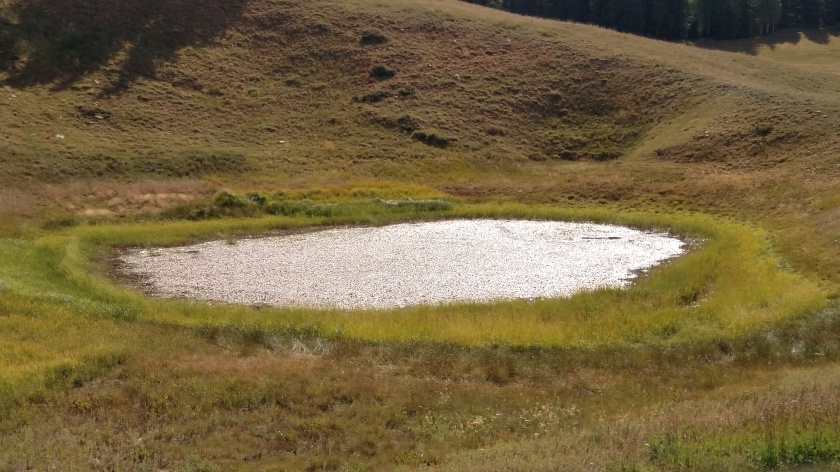 This is a cairn.  A cairn is a man-made pile of stones, often used as trail markers or as a landmark.  I have seen many simple cairns, a small stack of similarly shaped stones in a pyramid-type pattern, made by industrious individuals at various places but this is, by far, the most elaborate one I’ve seen so far.  It was on a small, gravel back road I was using to get to a scenic overlook.  Somebody had lots of time on their hands and used it very creatively.

I finally made it to the Lodge inside the Park and spent some time out near the campground looking for Kaibab Squirrels.  As I was leaving I saw these two bucks devouring an Aspen bush right next to the road.  Again, these pictures were taken without leaving the comfort (and safety) of my car.

When I got to the entrance gate the bison had all shifted to the left side of the road and were further off the road, taking it easy.  This is only a small portion of the 140+ bison I saw as I was leaving the Park. 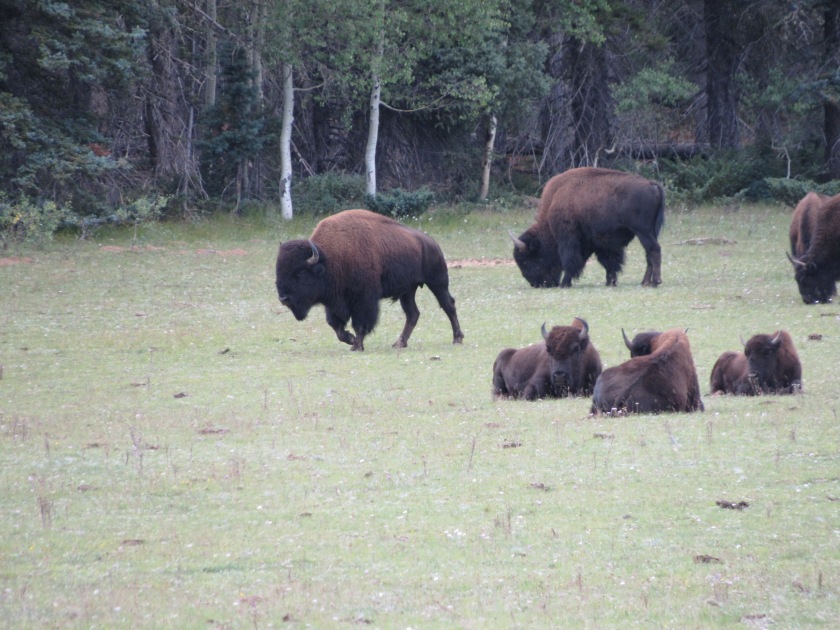 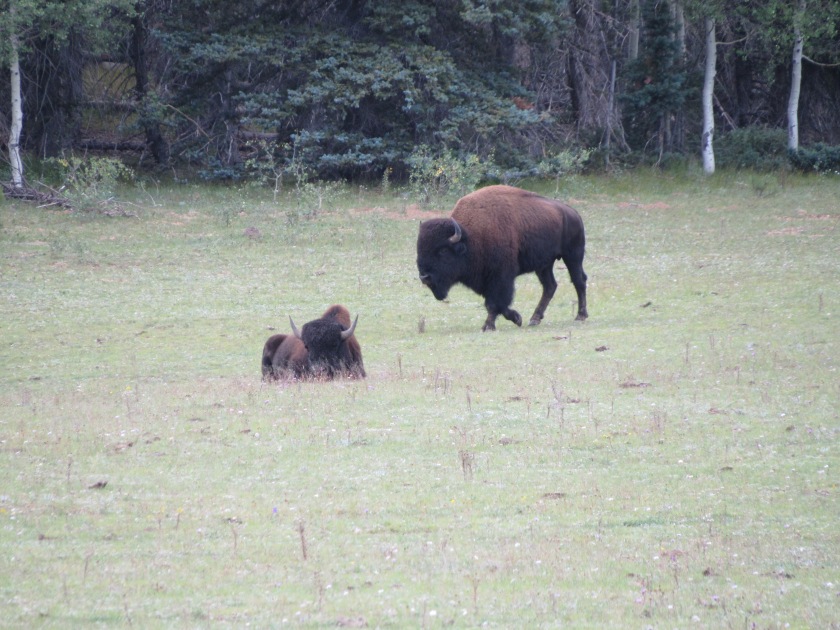