Monday I left Taos and headed west.  Most of the day was spent in New Mexico, on Route 64.  I went over the Rio Grande Gorge Bridge, past the Earthship Biotecture community and off into the desert.  It was 39 degrees when I got in my car at around 630am local time (light enough to safely drive).  It had dropped to 35 when I bought gas before getting on the road and got down to freezing or below once I got up to 9 and 10,000 feet.  I don’t think it ever made it above 70 today, although it was a beautiful, sunny day.

I drove past Chama, where my train ride originated a few days ago, and west to Bloomfield, where I arrived around 1130.  I had lunch, spent some time texting and sending emails, then headed south on Route 550 towards Chaco Canyon.

The proper name of the venue is Chaco Culture National Historical Park, although everyone seems to call it Chaco Canyon.  It is one of the few World Heritage Sites located in the United States (we lag behind other countries which have existed longer and have richer cultural history).  This site has undergone intense scrutiny by historical scholars and efforts are being made to preserve it in it’s natural state (although Trump, and the “fracking” industry have other ideas).  The US does excel in “natural” World Heritage sites because of our vast network of National Parks and naturally beautiful places.  This venue was first recommended to me by other Airbnb guests when I was staying in Flagstaff and visiting the Grand Canyon.  My hosts at the next Airbnb stop, in eastern Arizona, seconded the motion and highly recommended I get here.  Chaco isn’t the easiest place to get to.  I actually tried to get here from Albuquerque but spent so much time stopping to take pictures along the way, and having a rare sit-down lunch, that I determined that by the time I got here I’d have to turn around and leave.  Today I finally made it.

Chaco sits out in the desert, far removed from pretty much everything.  It was an hour-long drive south on Route 550, but then took almost 45 minutes to go in the, mostly unpaved, series of state access roads which only covered 21 miles but were in HORRIBLE condition.  I thought there was a shortcut I could take on the way out but learned that it is closed, apparently in even worse condition.  There were two places on the road where there were stern warning signs that traversing them should not be attempted if there was ANY water on the roadway.  That makes it easy to get stranded here if a sudden thunderstorm develops while you are in the Park.

I didn’t arrive at the Visitor Center until almost 130pm and determined that I could only be there for about 2 hours so I could make it to Cortez, Colorado before dark.  I was given a map and when I told the ranger I only had time to see a few of the sites she told me which ones to focus my attention on.

Most of the drive west from Taos was out in open country, and it was a very pleasant day.  When I got about an hour away from Bloomfield things started getting rocky again.  This formation caught my eye, but the rest were pretty much more of what we’ve seem plenty of already.

At the Visitor Center there was a huge relief map on the wall, showing the Park and the elevation changes, paved road and hiking paths.  It was way too big to get in one picture.  I’m only posting the portion which shows the paved road. 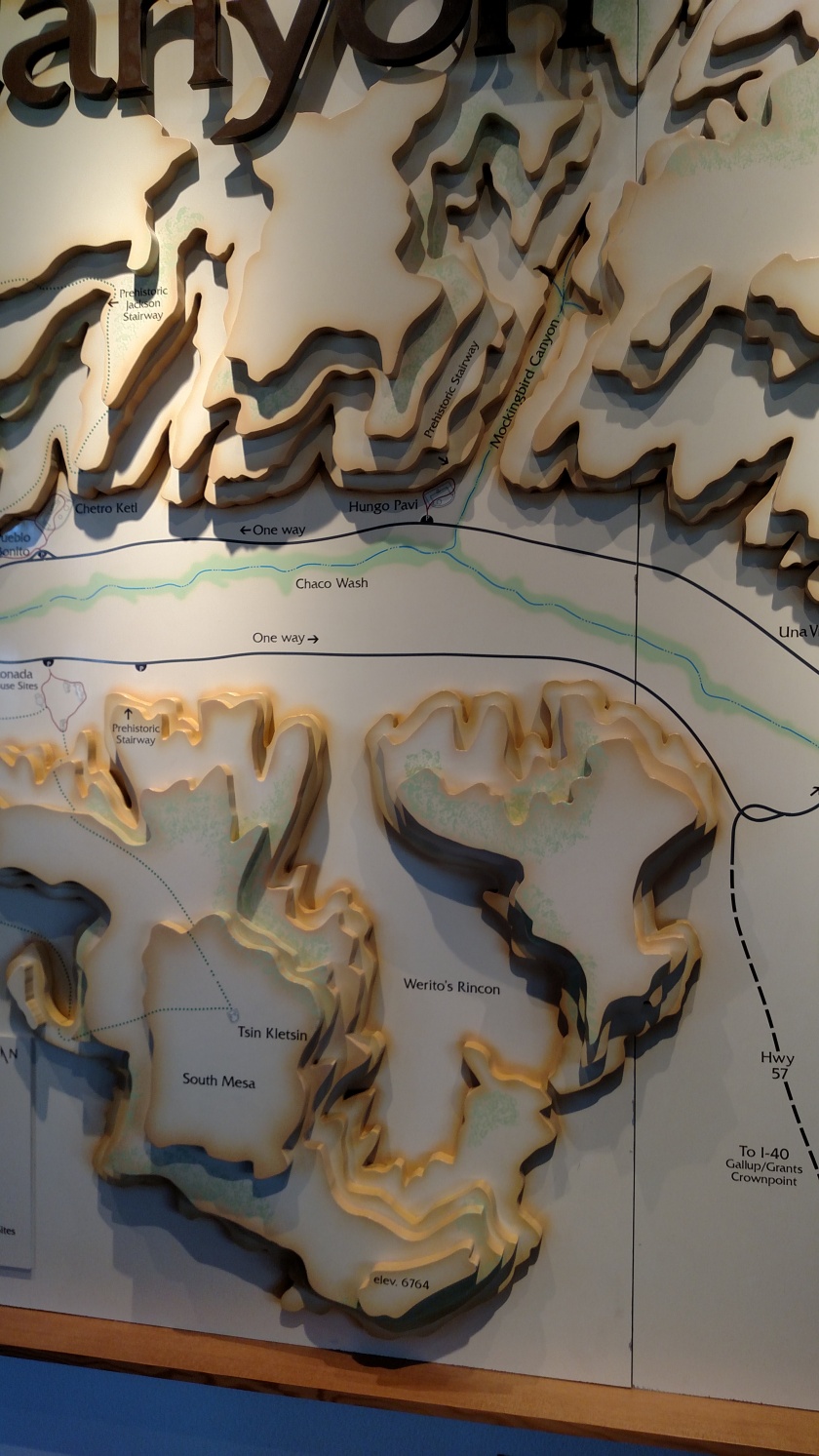 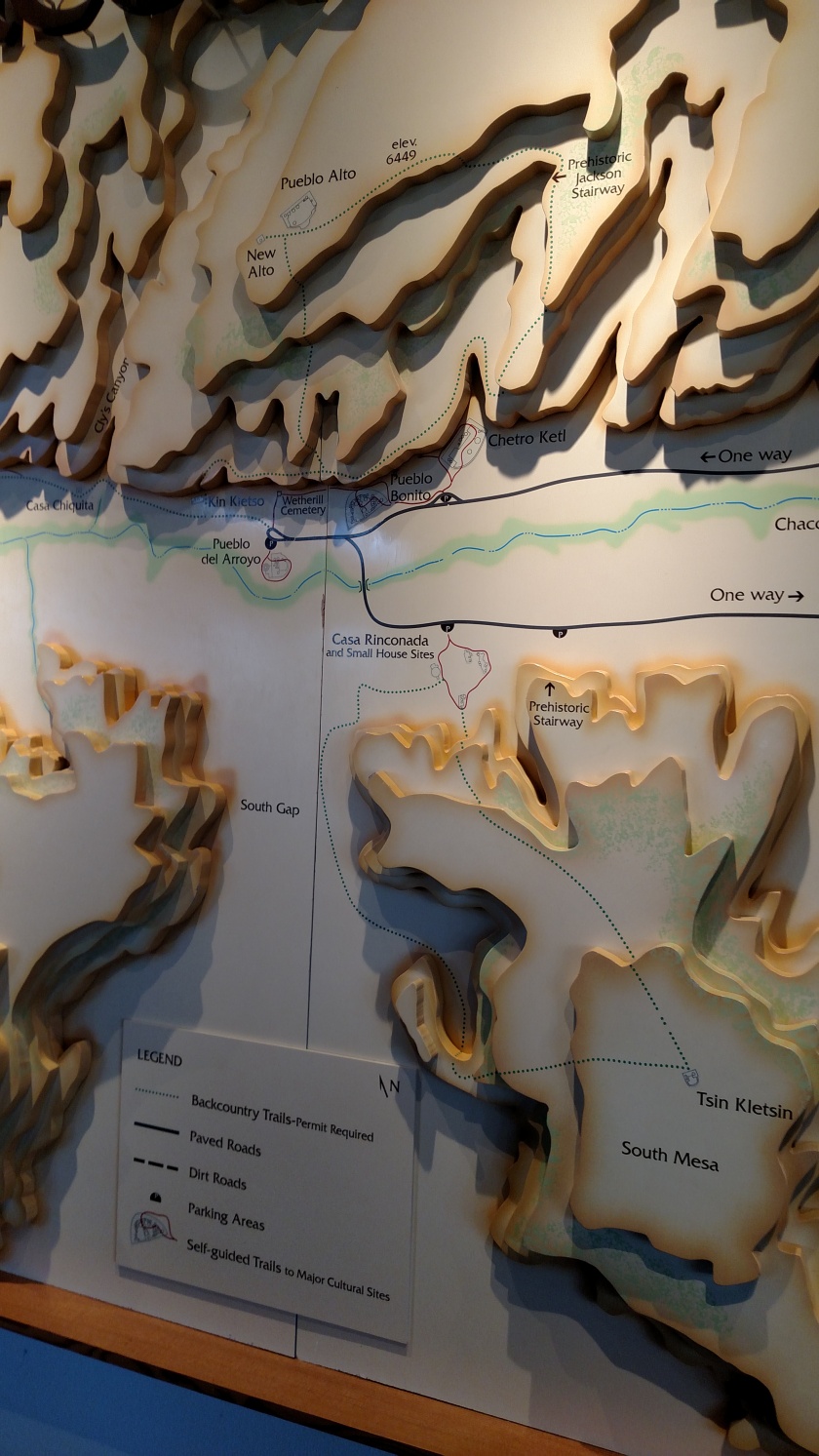 The area is lined with rock walls which are tall, but not as tall as many of the places I’ve seen recently.  I wouldn’t have been inclined to call it a canyon but technically I suppose it is.

You’ll see photos in subsequent posts illustrating just how big these chunks of dislodged rock are.

The canyon is wide and shallow, which is another reason why it didn’t really feel like a canyon.  There is a shallow gorge carved through the central area which probably contains water after the monsoon rains but was dry today.