I apologize for the one day delay in posting.  After visiting this venue on Tuesday and getting back to Durango I was exhausted and went to bed shortly after I arrived just before sunset.  I slept 6 straight hours, unusual for me, and when I woke up around 2am I realized how cold the house was – not bad for sleeping, but not good for downloading pictures and blogging for 4 hours.  I got back under the nice warm blankets and went back to sleep.  Yesterday morning I was shocked to learn that there was not room on my computer to download the 735 pictures I had taken on Tuesday!  I spent much of the morning making more backups and deleting things to make room for more.  I’ll need to do some serious off-loading when I get back to Durham.  I also needed to tend to some other chores (laundry, ordering new tires for the car, getting the oil & filter changed, arranging a wheel alignment, cleaning and organizing things in my car, getting out warmer clothes, etc) and the day became full very quickly.  It started raining around noon and never got above 60 degrees so it was a good day to be indoors anyway.  Turns out I cut one of my tires on the nasty road in to Chaco Canyon on Monday (imagine that!!) and the left front keeps losing air.  I was planning to get new tires here anyway but now I don’t want to drive any distance until they arrive and I get them installed.

As I write this I am bundled up in a sweatshirt and have an extra blanket on my legs (I get cranky if my knees get cold).  I kicked the thermostat up a few degrees before I started downloading pictures and will lobby to set it higher the remaining nights I am here.

There was a light dusting of snow the night before on some of the higher mountain peaks, as there was down in Taos.  After the rain moved out this afternoon I see there is now substantially more snow on the mountains north of Durango.  Things could start getting interesting during the next two weeks here in Colorado, as I’ll only be going further north.  I may even see snow when I take the train ride from Durango to Silverton on Monday, the only upcoming day during my stay when there is zero chance of rain in the forecast.

On Tuesday I drove from Cortez, Colorado down to Canyon de Chelly National Monument in northeast Arizona (keep in mind, I am very close to “Four Corners,” where Colorado, Utah, Arizona and New Mexico meet, so it doesn’t take long to get from one state to the other).  I approached the Canyon (whose name is pronounced de SHAY) from the northeast, on a series of scenic, paved “Indian Roads”. When I got to the first series of overlooks I did not yet have a map, so I didn’t know exactly what I was looking at, or that there were some small cliff dwellings scattered amongst the cliffs (I still haven’t had time to scrutinize the photos in detail to see if I happened to photograph any of them).

These were all taken with my smartphone camera.  Close-ups, taken with the digital camera, will be posted later.  I’ll obviously point out if there are any cliff dwellings. 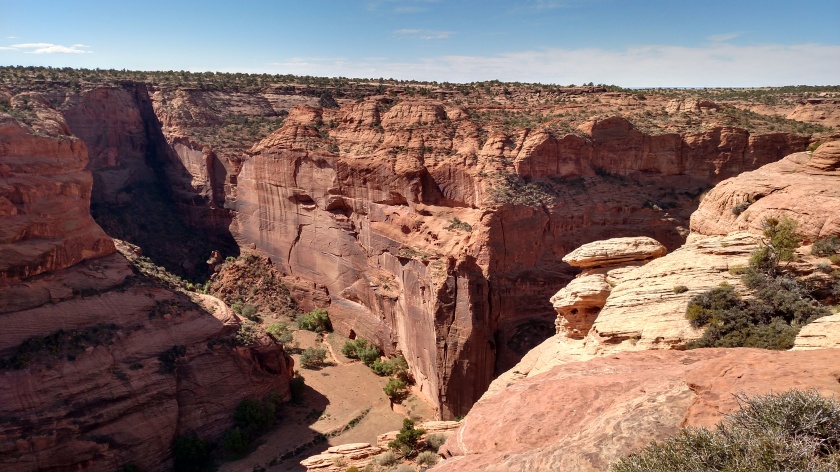 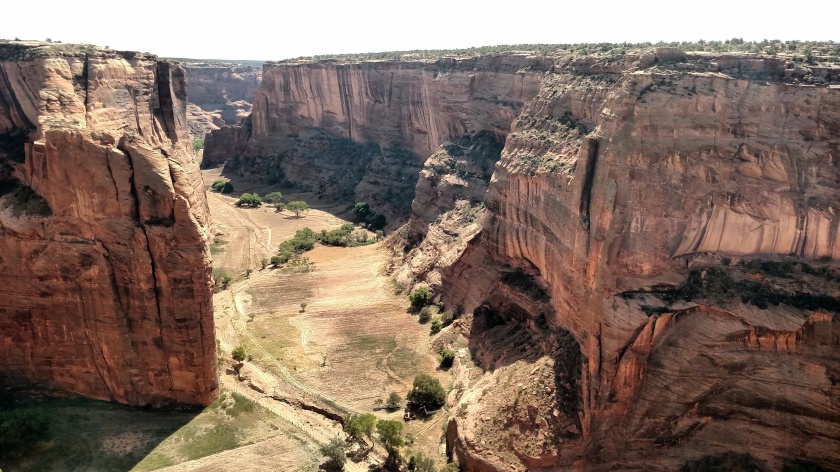 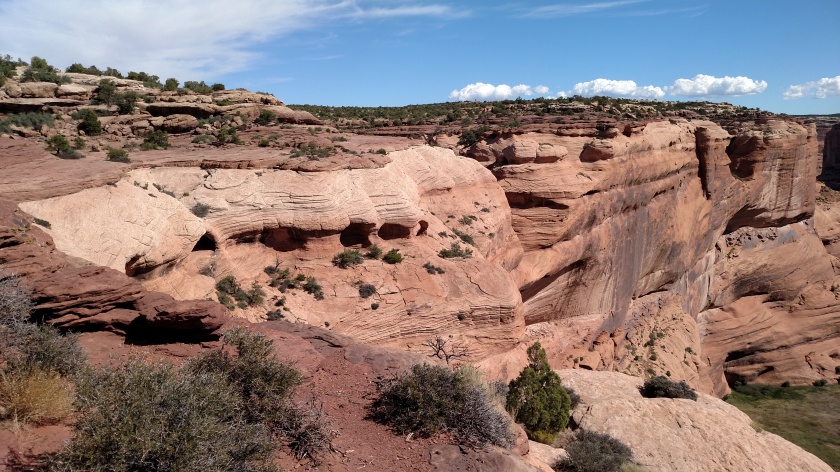 If you look at the right side of the photo below you’ll see a white pickup truck on the dirt road.