Thursday was another travel day.  My destination was Colorado Springs which is east of Salida, but I had some unfinished business to attend to.  I drove north, past all the mountains I took pictures of yesterday and resumed the clockwise scenic loop I started the day before.  Once I got past Leadville, and the location of the Camp Hale memorial  at the entrance to Ski Cooper resort, I continued north on Route 24 towards Vail and Interstate 70.  Eventually my loop would take me south of Breckenridge where I would resume travel on Route 24 east to Colorado Springs.

Here are some of the things I saw along the ride: 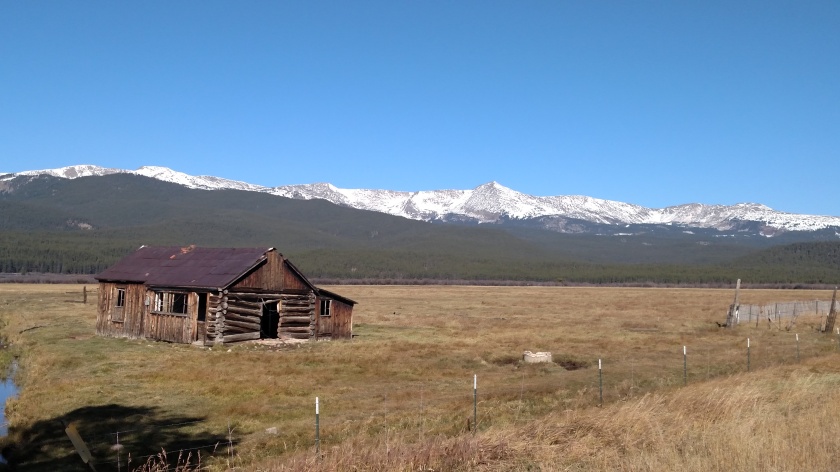 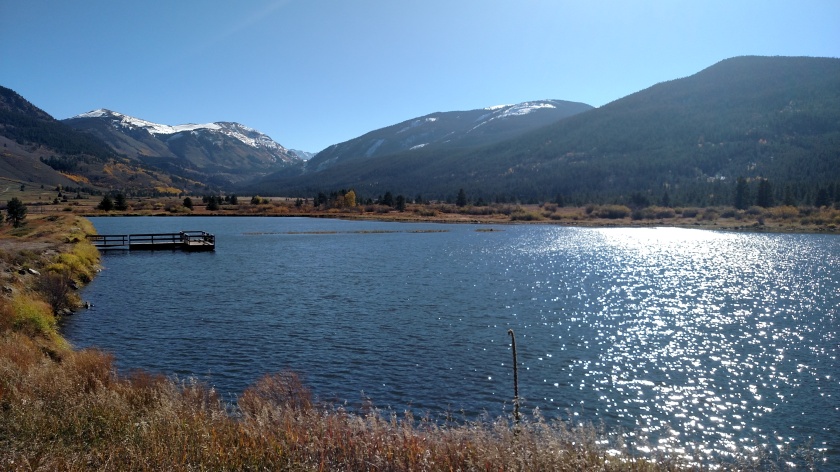 Shortly before getting to the dreaded interstate I came across the little town of Red Cliff. 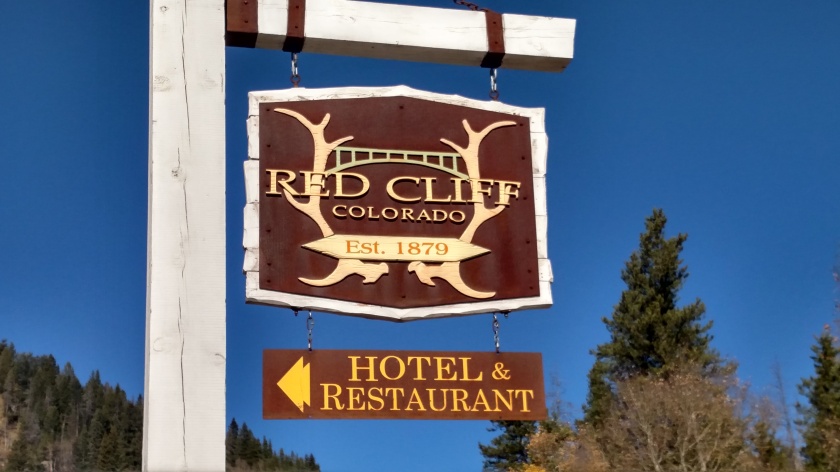 I didn’t understand the significance of the bridge on the sign until I turned left and took the access road down in to the town.  When I turned right at the bottom of the hill I understood. 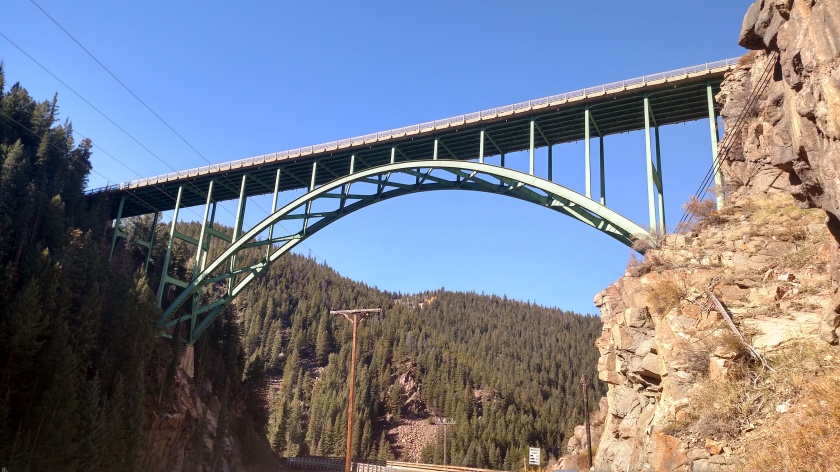 That is the Red Cliff Arch Bridge which carries Route 24 over the Eagle River (and over the Water Street bridge which I was about to traverse to get to the town of Red Cliff which is beyond it).  I often call little towns “cute”.  Sorry, Red Cliff, but I honestly can’t say I can call you cute.  It is an old town built on rugged terrain with bad streets and not many attractive structures.  Functional, perhaps, but not exactly postcard material.  The only thing I saw which I was inspired to take a picture of was this tricked out Dodge, which has evidently been converted to a high-profile 4-wheeler (note the license plate). 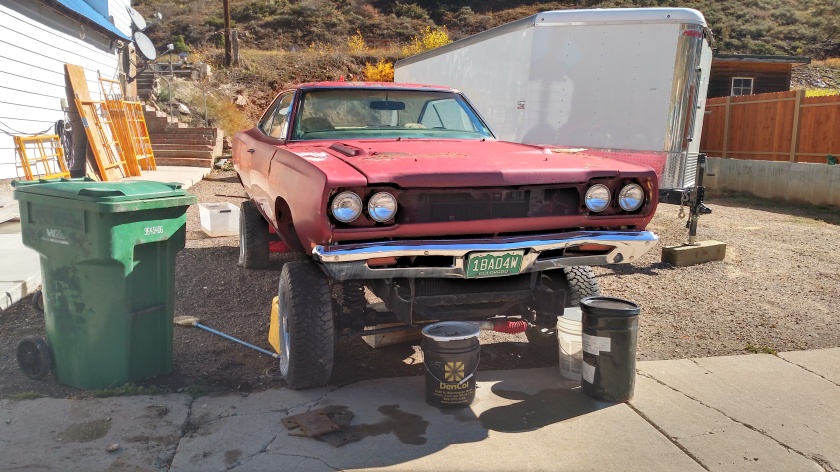 Here is a view of the bridges from above, after I went back up to Route 24 and crossed the high bridge to continue north.  On the right is the road leading down to Red Cliff, which is to the left of the bridge from this vantage point. 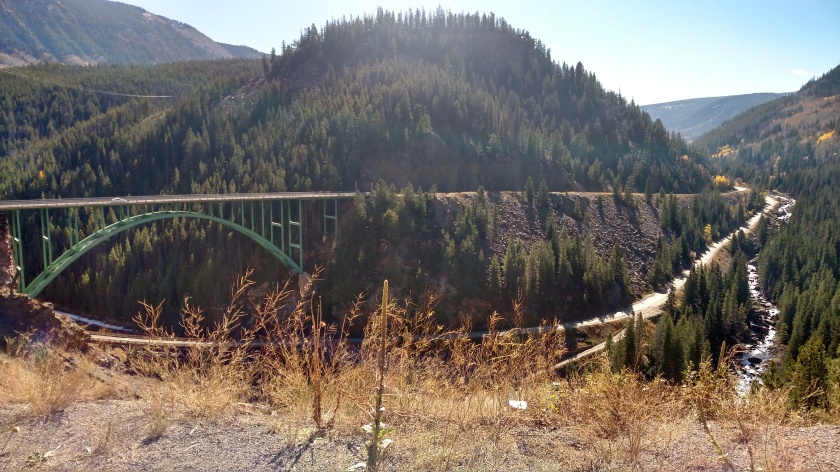 While researching information online I found this picture of the high bridge, taken in the winter: 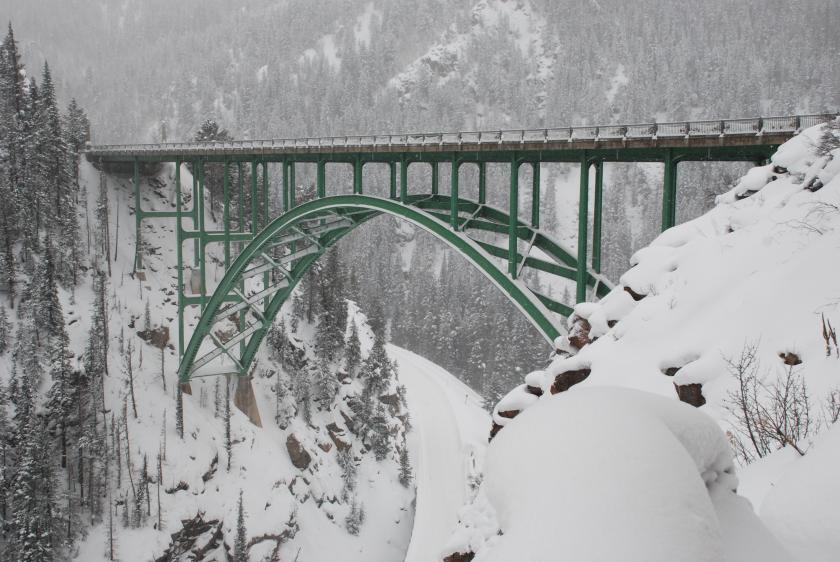 Route 24 then climbed up over Tennessee Pass and when I stopped to take some pictures of the view I noticed this modern “ghost town” of Gilman down in the valley below.  You’ll see more of Gilman when I post close-ups taken with the digital camera.  I think tomorrow I’ll do a bunch of “close-ups” posts since I am getting a little behind on those.

Gilman was a mining town which was abandoned in 1984 due to the underperformance of the adjacent mine and multiple environmental issues.  It is private land and no longer accessible to the public. 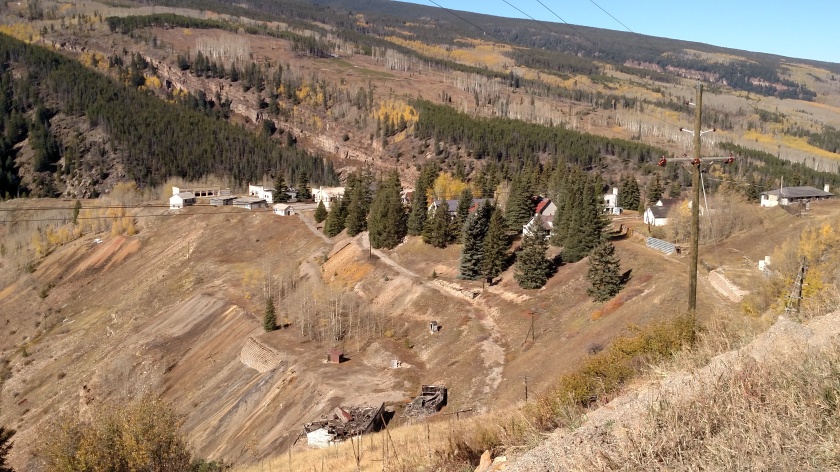 I finally reached I-70 and took it east for about 30 miles, passing Vail and going over Vail Pass.  For those of you hoping to see pictures of Aspen and Vail, sorry to disappoint you.  I visited those towns years ago when I drove to Colorado with my youngest brother and have no desire to revisit them.

When I got to exit 203 I got off the interstate (they had it down to one lane several places and I was very happy I was here mid-day and not during rush hour or in a snow storm).  And speaking of snow, I had heard that this area had received over a foot of snow on Monday.  There was little evidence of that now.  There was some snow in shaded areas but the road itself was clear and dry.

When I got off the interstate I started heading south.  I went through Breckenridge, where I had stayed briefly about a month ago, and took Route 9 south.  Here is a picture of Breckenridge ski area, west of town, with new snow on the slopes.  My brother worked at a ski shop here for one season after graduating from college. 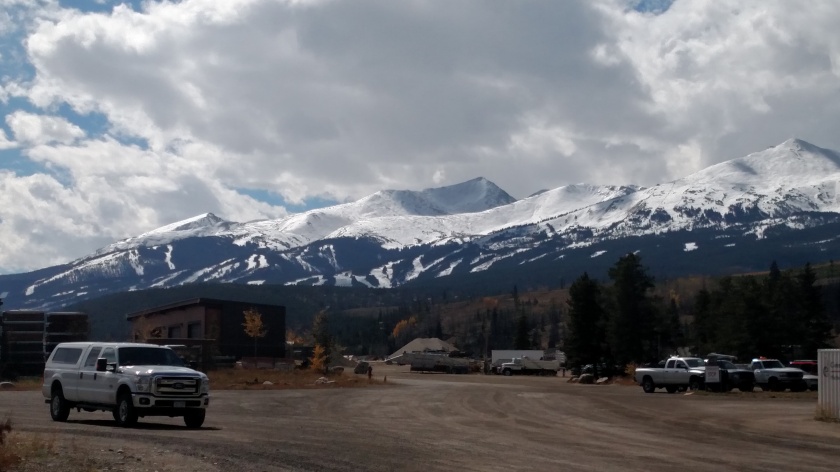 When I got south of town I started to climb Hoosier Pass.  Here I did see more snow which had accumulated next to the road.  I think this was at around 10,500 feet elevation. 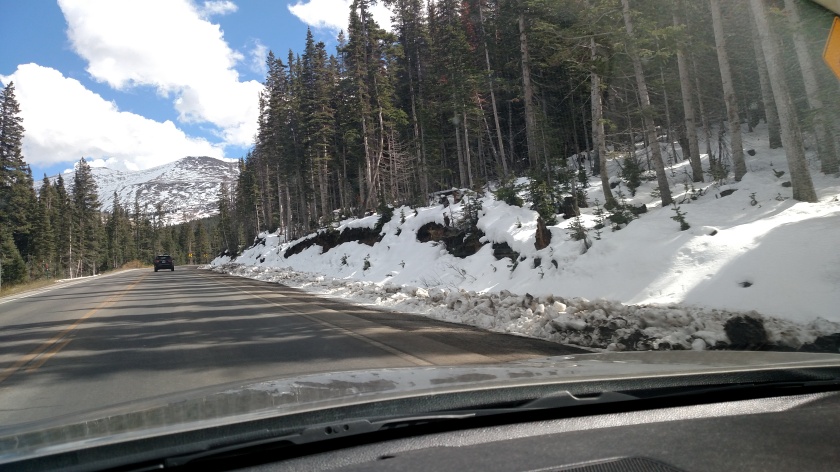 I crossed the Continental Divide yet again at Hoosier Pass… 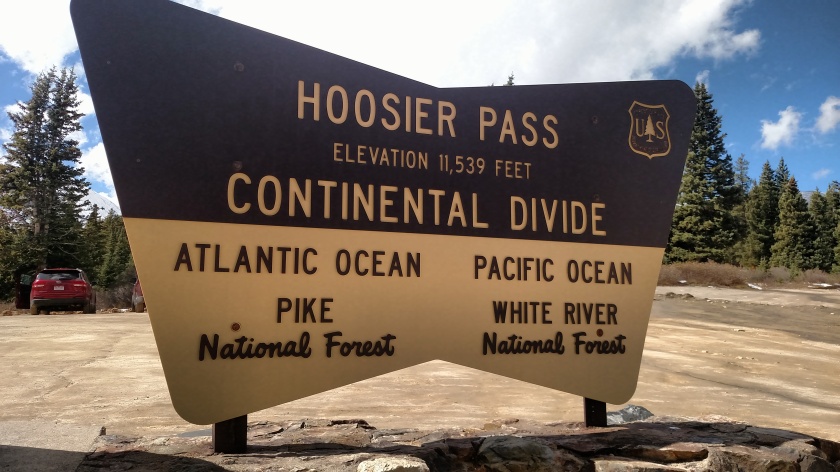 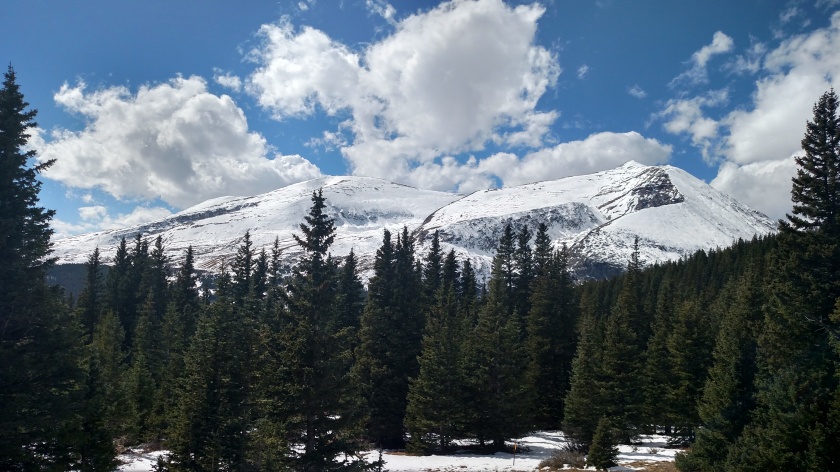 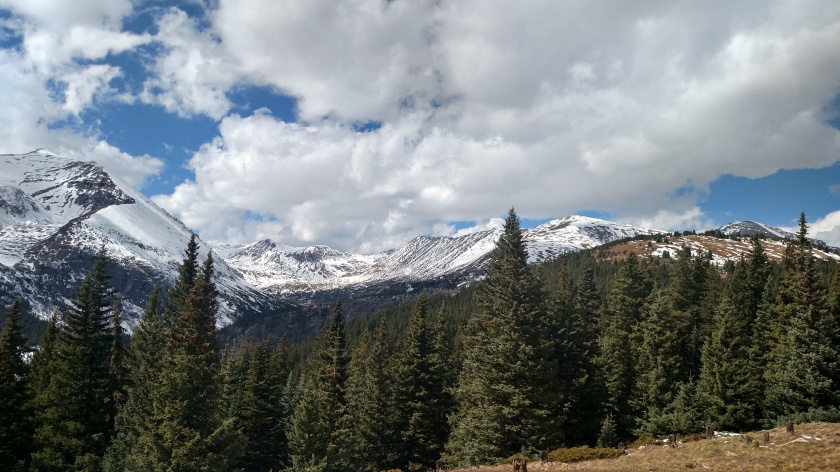 When I got to the town of Alma I saw a few businesses with interesting names.  I dedicate this one to my friends Eric and Shawn… 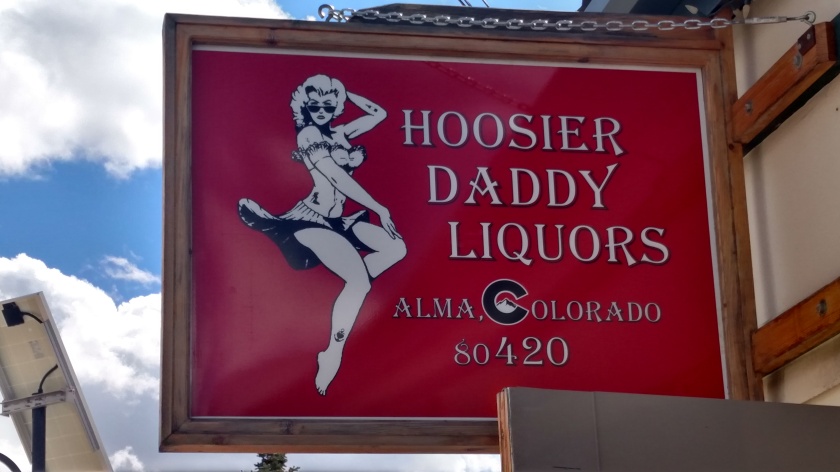 … not because it is a liquor store but because they are both from Indiana.  I’m sure this will be the very first time they’ve heard the phrase “Hoosier Daddy” (yeah, right).

Note that the owners have highlighted the “420” part of Alma’s zip code (marijuana is legal in Colorado and 420 is a cultural reference to smoking it).

This little guy was perched on the railing in front of a house.  It was mounted on a spring and swayed back and forth in the wind.  I thought it looked pretty cool. 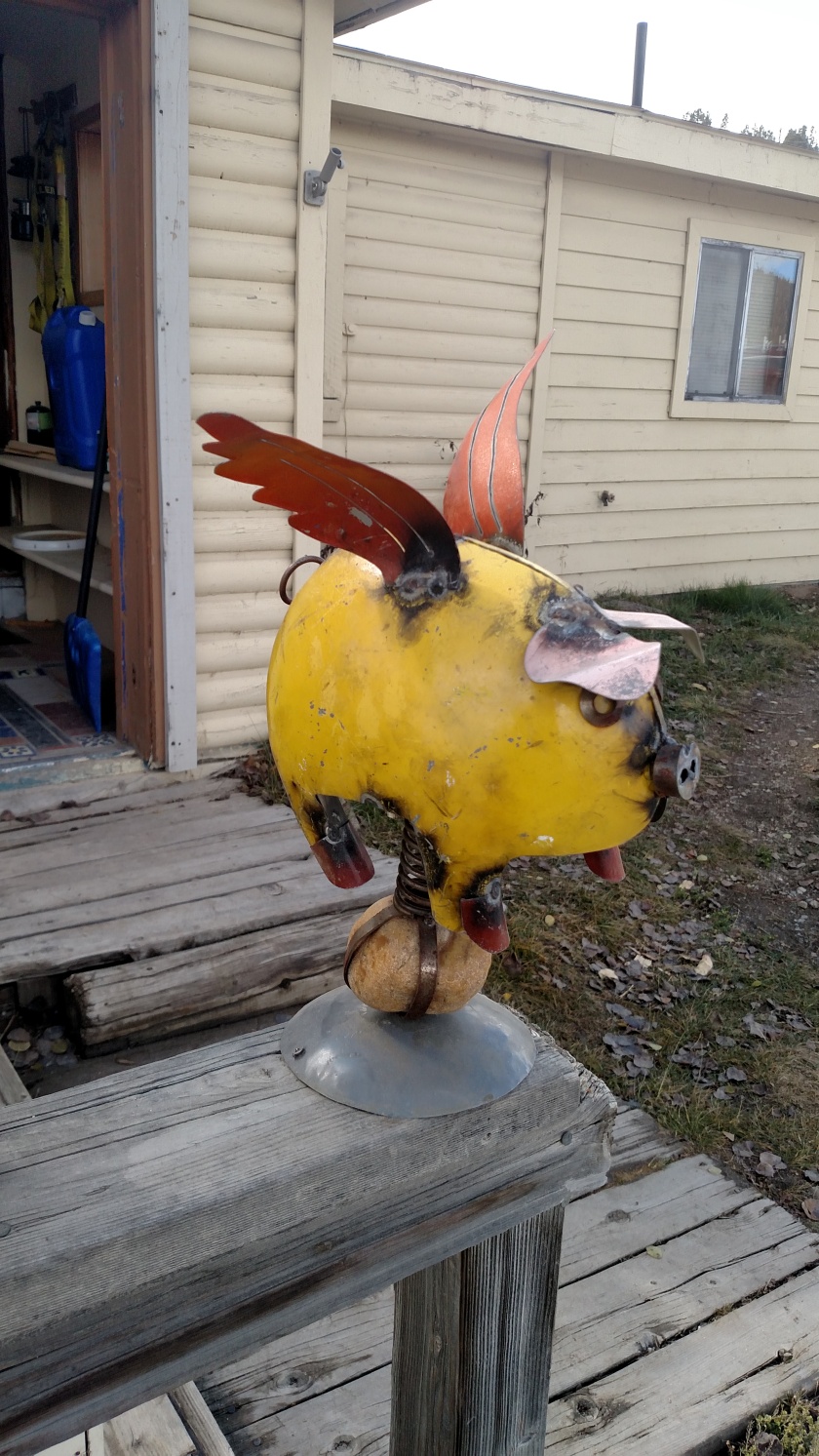