This lighthouse, nicknamed “Terrible Tillie,” is located 1.2 miles off the Oregon Coast, about halfway between Cannon Beach and Seaside.  Because of the harsh conditions at sea and the small size of basalt rock it sits on it took over 500 days to build.  It is 62 feet tall and sits 133 feet above sea level on less than an acre of basalt rock.  It is now only accessible by helicopter.

This was taken from several miles down the coast (making it even further away):

This was taken from Cannon Beach, a little closer.

And these were taken from Ecola State Park, a little further north than Cannon Beach, the closest I could get.

Less than a month before it would be put into service a ship got too close and crashed, killing all 16 crew members on board.  The light was finally lit on January 21, 1881.  It was knocked out of service by a storm in 1934 with winds of over 100 miles per hour and repairs took over a year to make.  It was taken permanently out of service in 1957 and now has private owners.  For a few years after being converted to private ownership it was a columbarium (a place to store cremated human remains) but the license was revoked in 1999 and has never been renewed.

Here are some other photos of the lighthouse I found online: 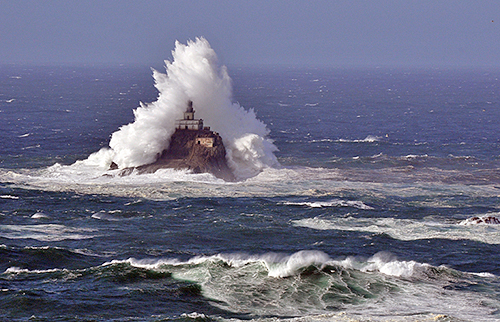