Thursday morning I awoke in Lunenburg and had this view of some of the small boats in the harbor from my window:

I walked around downtown and the harbor area for about 2 hours.  Lunenburg is a very colorful town, with many brightly colored houses and businesses, trendy restaurants, antique shops and art galleries.

Near the harbor I found this aerial view of the town: 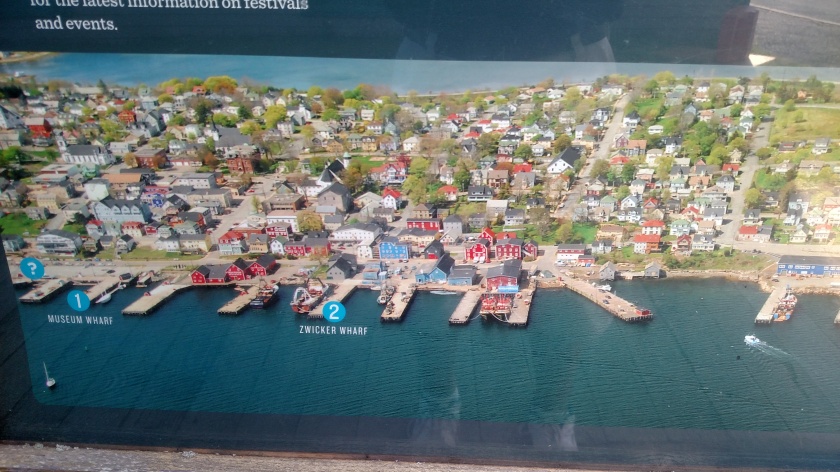 I also walked along the harbor, though most docks were private and off limits.

Here is a better picture of the smaller boats: 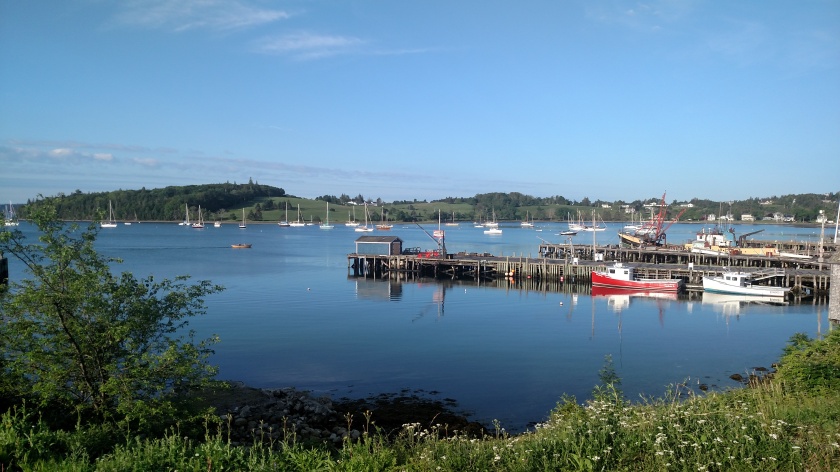 And there were some big ones here, too:

There is a cruise ship, the Bluenose II, which is supposed to be based here but I couldn’t find it.

After completing an errand in town for a friend, I headed south to the tiny town of Blue Rocks.  Evidently this town and view is popular with artists.

I then began my scenic drive which meandered along the coastline.  I made my next  stop in the town of Mahone Bay.  The popular photo op there is of these three church steeples: 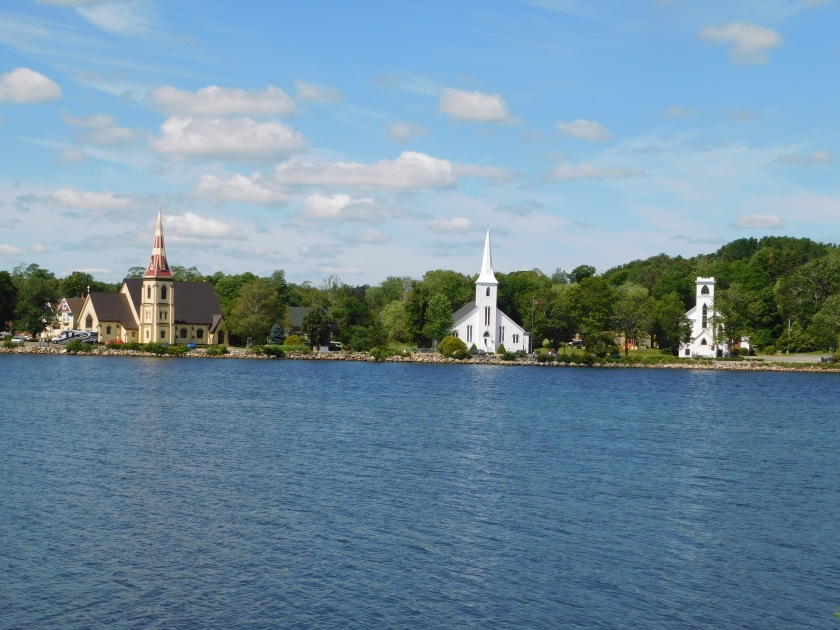 It took me a while to find the ideal spot to take the photo but there it is.  Paintings often have them closer together but this is how they appear in real life.

Next I came across a memorial near the little town of Baywater.  Swissair Flight 111 crashed into the ocean about 5 miles offshore around midnight on September 2, 1998 killing all 229 people aboard.

The memorial is in the shape of a triangle because the crash site triangulates to land locations here in Baywater and over in Whalesback (there is a similar memorial there).

The flight had taken off from New York bound for Geneva, Switzerland.  Shortly after takeoff a fire developed onboard and the captain requested rerouting to Logan airport in Boston.  He was advised that Halifax airport was closer but the fire had gotten out of control resulting in loss of flight control and knocking out the data to the flight recorders about 5 minutes before impact.  It is believed to have plunged into the ocean at high speed.

A moment of silence before moving on please….

Next I had lunch at a colorful little deli in Tantallon:

I tried something new – a Montreal Smoked Meat sandwich, and a small bowl of split pea soup.  The sandwich was very much like corned beef.  It wasn’t really a soup day but I order pea soup just about every time I see it offered and it was very good.  I resisted buying any sweet treats.  I did stop at a bakery in LaHave for treats a few days ago while waiting for a ferry on the way to Lunenburg (I forgot to tell about it in that post). In addition to an awesome cranberry muffin I had a raspberry coconut bar which was to die for.  I will have to look up the recipe and try making them at home.   For some reason the ferry there is called a “cable ferry” and I had visions of my car being attached to cables, like a zipline, to be thrust across the river but it ended up just being a regular ferry like the ones I have been on already.  Ho-hum.  Someone really needs to think about the zipline idea – it would be much more memorable.

Next I drove past Whalesback and stopped at Peggy’s Cove, a popular (almost too popular) tourist spot which had so many people wandering around along the narrow road that it was a very slow drive in.  For me the big attraction here was the lighthouse.

Nova Scotia means “New Scotland” and there are supposed to be lots of people from Scotland and Ireland living in the province.  I was expecting to see lots of plaid, family crests and experience Scottish strathspeys, Acadian jigs, Celtic rock and Ceilidh (pronounced KAY-lee) but the first sign of anything Scottish was this guy playing bagpipes near the lighthouse.

I suspect that as I get further north, especially towards Cape Breton Island in northeast Nova Scotia, that my wishes will be fulfilled.  The kid at the Tidal Bore visitor center in Truro already told me that I might experience a Ceilidh at a place he recommended for lunch up there.

I actually breezed right past another memorial on my way in to Halifax but I backtracked to see in on Friday and I will post information about it separately.

Halifax is a much bigger city than I was expecting and I was somewhat unprepared and intimidated so I scooted down to my Airbnb south of town in order to avoid rush hour and checked in early, washed a load of laundry and got caught up on some blog posts.