Friday was my first full day in Spokane (pronounced spo-CAN), Washington which in the extreme eastern part of the state, not far from the border with Idaho.  Getting here on Thursday was no big deal although the drive on my scenic roads took most of the day.  The only wildfire smoke I encountered on Thursday was near Twisp (as expected) but I didn’t notice it until I was about a half hour away from town and the road I was on would then turn slightly northeast whereas the majority of the smoke was southeast (towards Chelan and Wenatchee) so I drove out of it just as quickly as I had driven into it and the rest of the day was gorgeous.

Friday morning I drove downtown to go to the Visitor Center for maps and brochures.  When I got back to my car I had a low-tire-inflation warning so I found a gas station to put more air in it (it wasn’t even noticeably low but was 10 lbs. lower than the others), then took it to  Discount Tire on the north side of town.  Turns out there was a nail in it.  I ate lunch up near where I had the tire fixed, then drove back into town to visit Riverside Park, the largest park in the area and right across the Spokane River from the downtown area.

Much to my surprise I discovered that it was the site of “Pig-Out in the Park,” a six-day extravaganza of fair-food and free music:

The building on the left in the photo above houses a hand-carved wooden carousel, made by Charles Looff in 1909.  The carousel was restored and moved to this enclosed, climate-controlled building back in 1975 (it ceased operations in 1968 at it’s prior home). 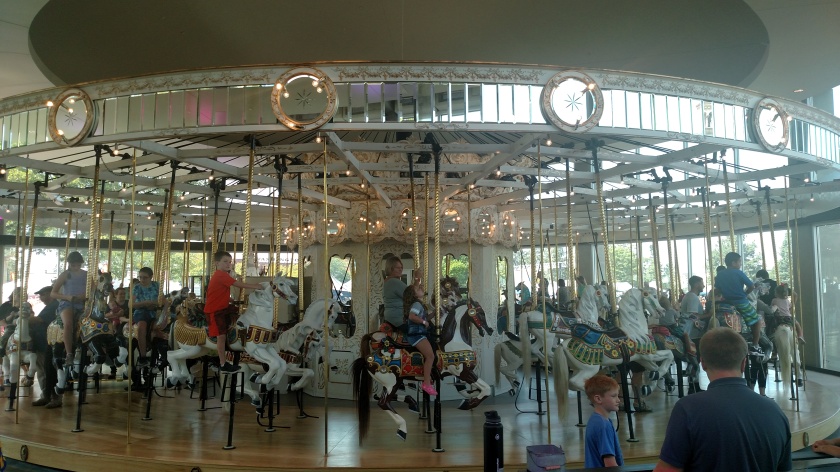 I had seen another Looff carousel last year, I believe in Missoula, Montana.

Just outside the carousel building was this large water fountain.  The temperature was in the low 70’s and the kids were having a blast running through it. 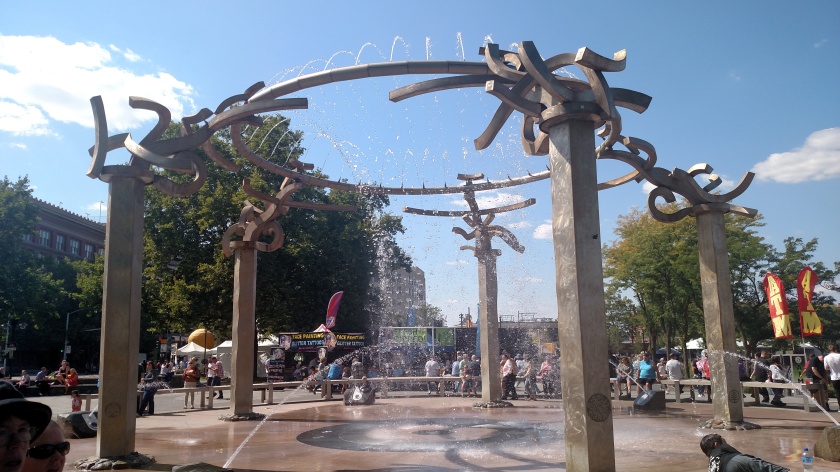 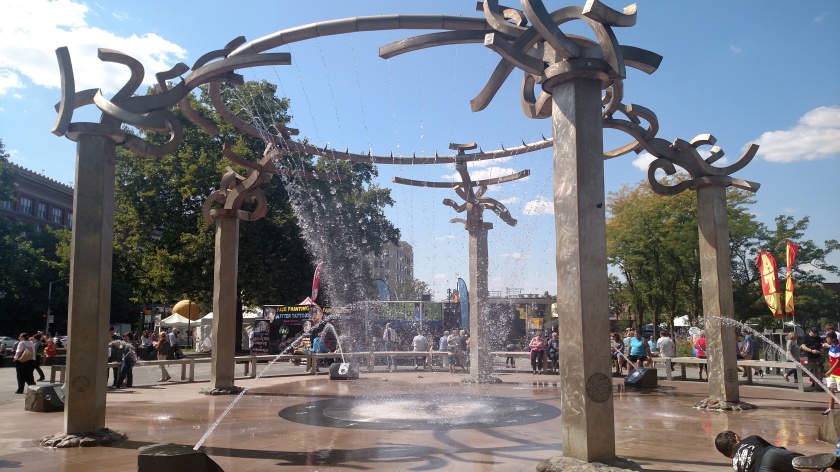 This is the view from outside the carousel building, looking over the river at the area where most of the food vendors were:

The clock tower was part of the old railroad station and the clock is hand-wound once a day.  The metal structure in the center of the photo was part of the US Pavilion at Expo 74, held in Spokane, and the ground underneath it is being re-worked to become a more useable area of the park.  Riverside Park is usually a large open-space for people to enjoy when not being used for special events.

There was at least one vendor selling frozen “Nitro Puffs,” also known as “Dragon Puffs,” which are supposedly all the rage at State Fairs and outdoor festivals this year.  The puffs are treated with liquid nitrogen and then have smoke vapors emanating from them.  I saw a guy standing next to me eating them and smoke came out of his nose.  I asked if I could take a photo for the blog but the next three bites didn’t have the same result so I left him alone and you’ll just have to take my word for it.  I had actually just read an article online a few days ago about this trend and apparently the FDA is discouraging it because it can harm people with asthma or other ailments.  I really don’t think liquid nitrogen was intended for human consumption…

Friday was a beautiful day and you’d never know there were wildfires in other parts of the area.  I had feared that the air quality here would have gotten worse again by the time I got here but the weather forecast last night sounded pretty optimistic for the remainder of the Labor Day weekend.

I don’t really have any big plans while I’m here so I will probably just visit many of the other city parks (they have lots) and may even go back down to Riverside Park.