Tuesday morning I set out from Granville Ferry (east of Digby and north of Annapolis Royal on the map above) to drive to Kejimkujik National Park, about a half hour south.  This was the view looking east near the bridge I had to drive over to get to Annapolis Ferry:

This is an osprey, guarding her nest on a utility pole right next to the parking lot where I took that photo.  I had heard her up there squawking the night before when I had stopped to view the river.

Once I was done at the Park (see separate post below), and at the suggestion of my Airbnb hostess, I took a series of small roads to the little town of Bear River (not shown on the map but located diagonally between the 8 above the Park, denoting the highway number, and the town of Smiths Cove, just south of Digby). 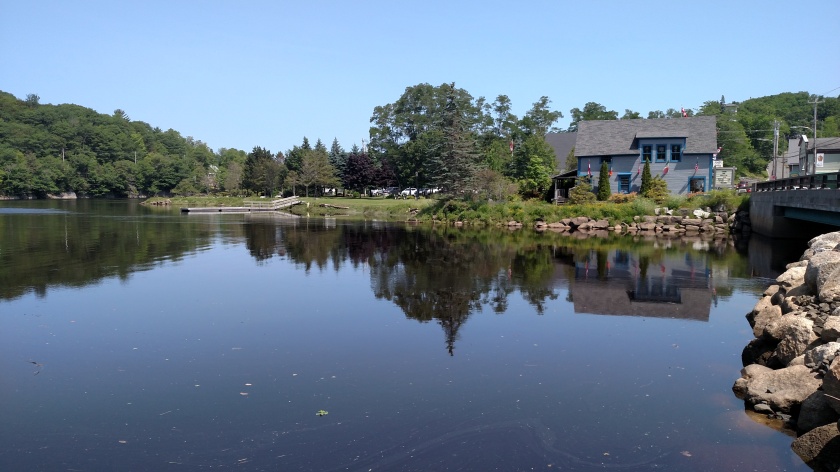 The buildings on the right in the photo above are all built on stilts, as seen from this view from the other side of the river:

Bear River is hosting their annual Cherry Carnival this weekend.  In addition to pie eating and pit spitting contests the highlight of the carnival is the Greased Log competition, where a telephone pole is liberally coated with grease, placed in the river and contestants are given a prize if they can successfully walk all the way across it.  Evidently it is quite a hoot.  My Airbnb hostess very enthusiastically told me about it, as did a gentleman who I met while taking these photos who has lived here all his life.

After seeing Bear River I drove up through Digby and out onto Digby Neck, a long, thin peninsula which juts out into the Bay of Fundy, parallel to the mainland.  I stopped at Lake Midway Provincial Park where I saw this guy kayaking back to where his wife and daughters were picnicking nearby:

Next stop was Sandy Cove on the inland side of the peninsula.  This photo was taken at 205 pm, on my way west:

And this is the same scene at 455 pm as I was returning to Digby.  You can see how much the receding tide had dropped in the meantime:

Next stop as I drove west was the ferry which would take me across the “Petite Passage” over to Long Island.

I drove all the way across Long Island to the town of Freeport.  I could have taken another ferry across the “Grand Passage” to Brier Island but decided not to.  One thing I missed by not going was a chance to see this lighthouse in person:

I drove back east on Long Island and stopped to see Balancing Rock.  This involved a long walk out a dirt path and wooden walkway to a long set of stairs (235 of them) which would take me down to the water’s edge.

Here is the reward: 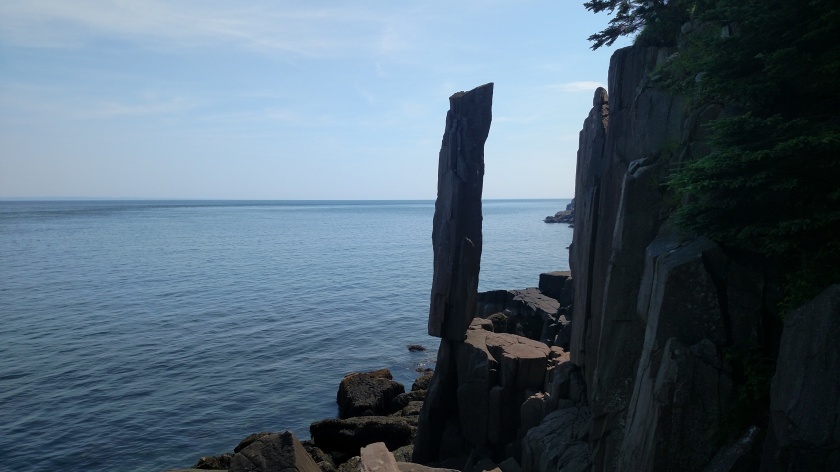 What you are seeing is a columnar basalt sea stack, about 30 feet tall, which is perched precariously on the rock below.

The signage on-site teases the viewer about the weight of the column but I can’t find the exact number online.  Legend has it that a fisherman once tied a rope to it and tried to topple it without success.  According to the sign a cubic meter weighs 3 tonnes (slightly more in US tons).  Evidently the column weighs several tons.

Feeling exhilarated, the climb back up those 235 stairs wasn’t as bad as I was expecting.