Don’t be intimidated by all those k’s and j’s.  Just stick an ‘a’ right in the middle of it and it is pronounced pretty much just how it looks.  keji-ma-COO-jik.  I will explain the origin of the name later in this post.

“Keji,” as it is called by the locals, is about a half hour southeast from where I was staying in Granville Ferry.  It is an inland, heavily wooded park with a huge lake on the eastern side of it, featuring many islands of all sizes.  There are also lots of smaller lakes in the Park. 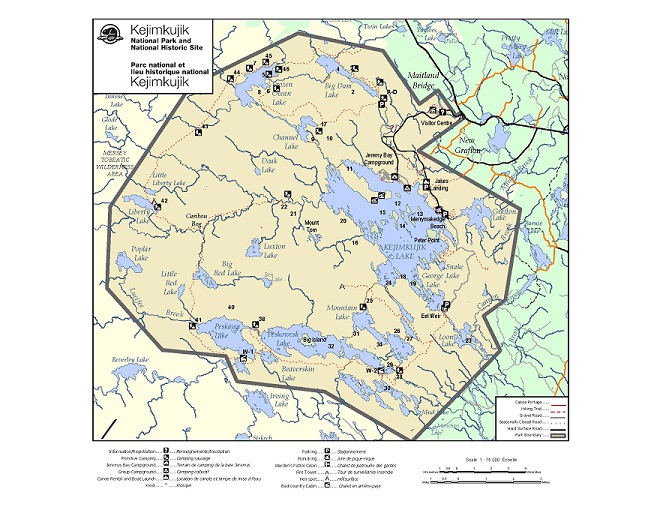 Here is a photo of the map I was given at the Visitor Center: 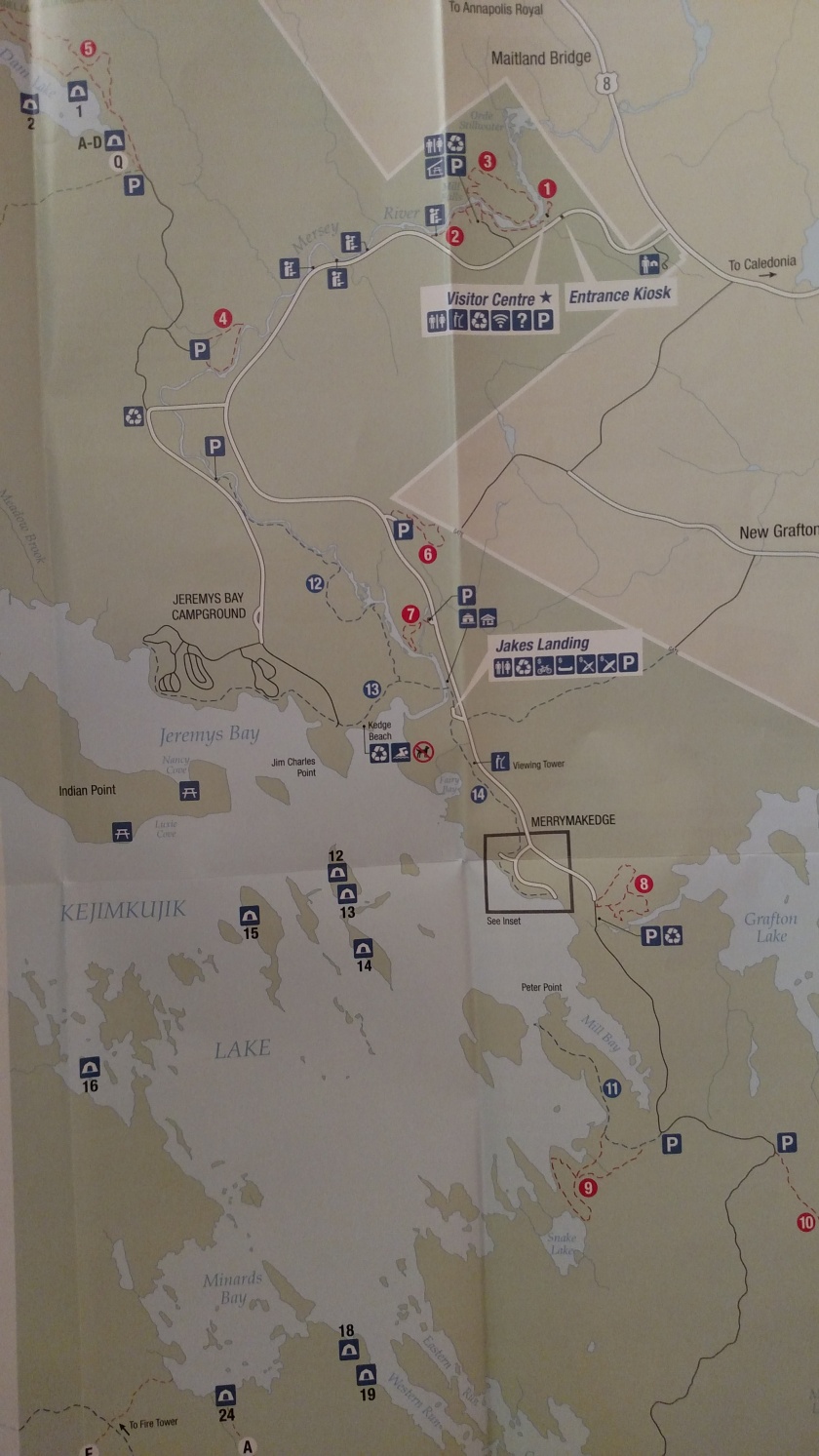 The map doesn’t show the entire lake or park, only the main road which goes down the eastern side of the lake.  I drove to the last parking area inside the “box” in the photo.  There were only two vehicles in the parking area when I arrived and there wasn’t a soul in sight. 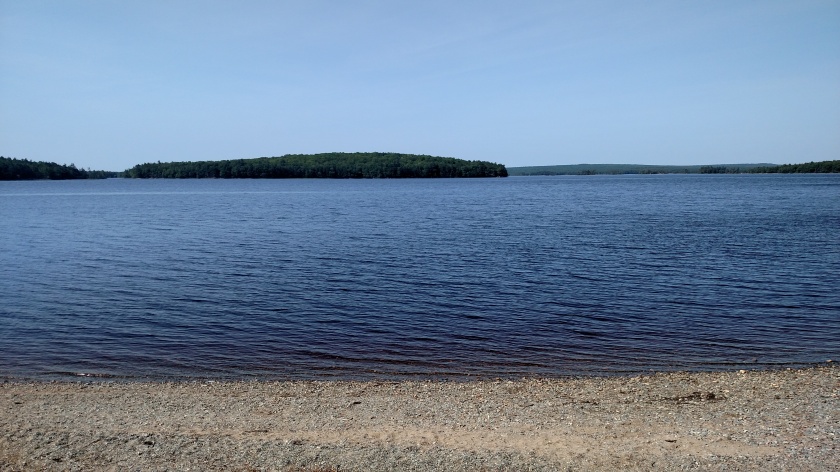 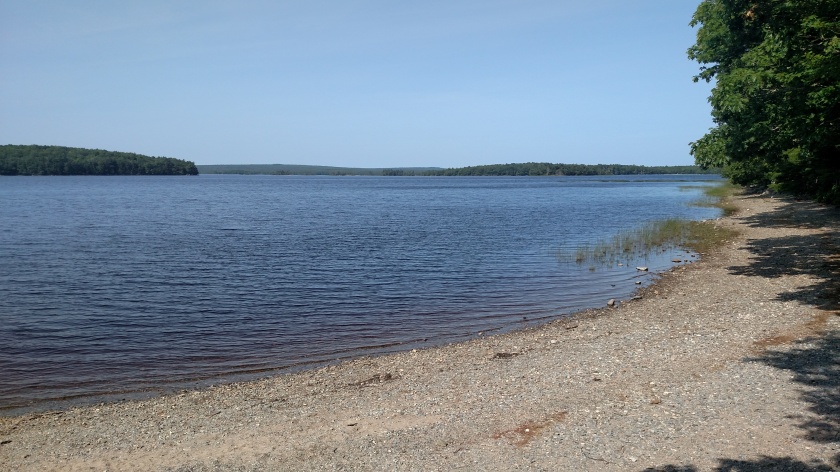 From pre-trip research I knew there wouldn’t be much for me to do here but I sat for a long time just enjoying the solitude.  There are lots of hiking trails and camping areas.  But they say the best way to see Keji is from the water.  This is paradise for canoers and kayakers.  It is also a great place for stargazing as it is in the remote southwest end of Nova Scotia and is well protected from light pollution.

Later in the morning some other folks arrived – a young family with two kids who frolicked in the water, another couple with two dogs who thoroughly enjoyed playing fetch in the water at the far end of the beach, reserved specifically for pets, and four ladies who arrived with their canoe who were about to embark out to one of the islands to spend the day.  One of the ladies knew my Airbnb hostess. 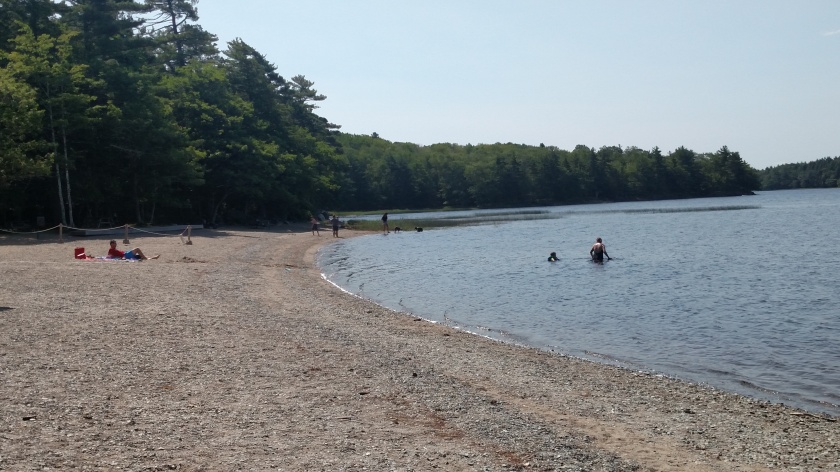 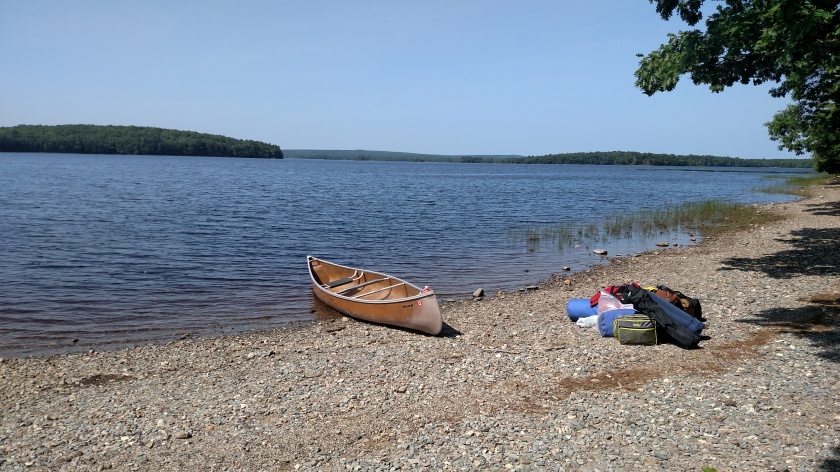 The name of the park is derived from the Mi’kmaq phrase for “little fairies”.  Fairies, or gnomes and elves, are featured prominently in petroglyphs found in the Park.  Mi’kmaq (pronounced mick-maw) are the indigenous people who inhabited the area and they lived in all of the Maritime provinces except the Labrador part of Newfoundland and Labrador, which was inhabited by the Inuit people.

The names and numbers in the photo below denote regions where the Mi’kmaq lived. Keji is located near number 7 is the lower left corner. 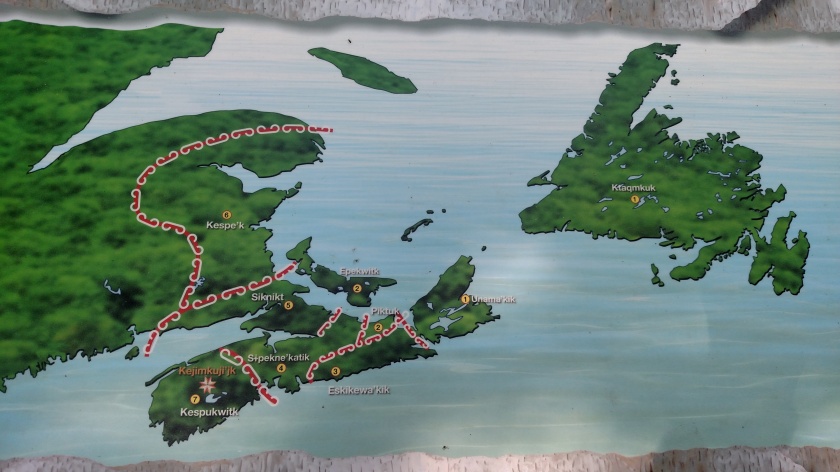 There are still many proud Mi’kmaq descendants living in the area today.

Here is some interesting artwork from the sign which had the map showing the provinces with Mi’kmaq settlements. 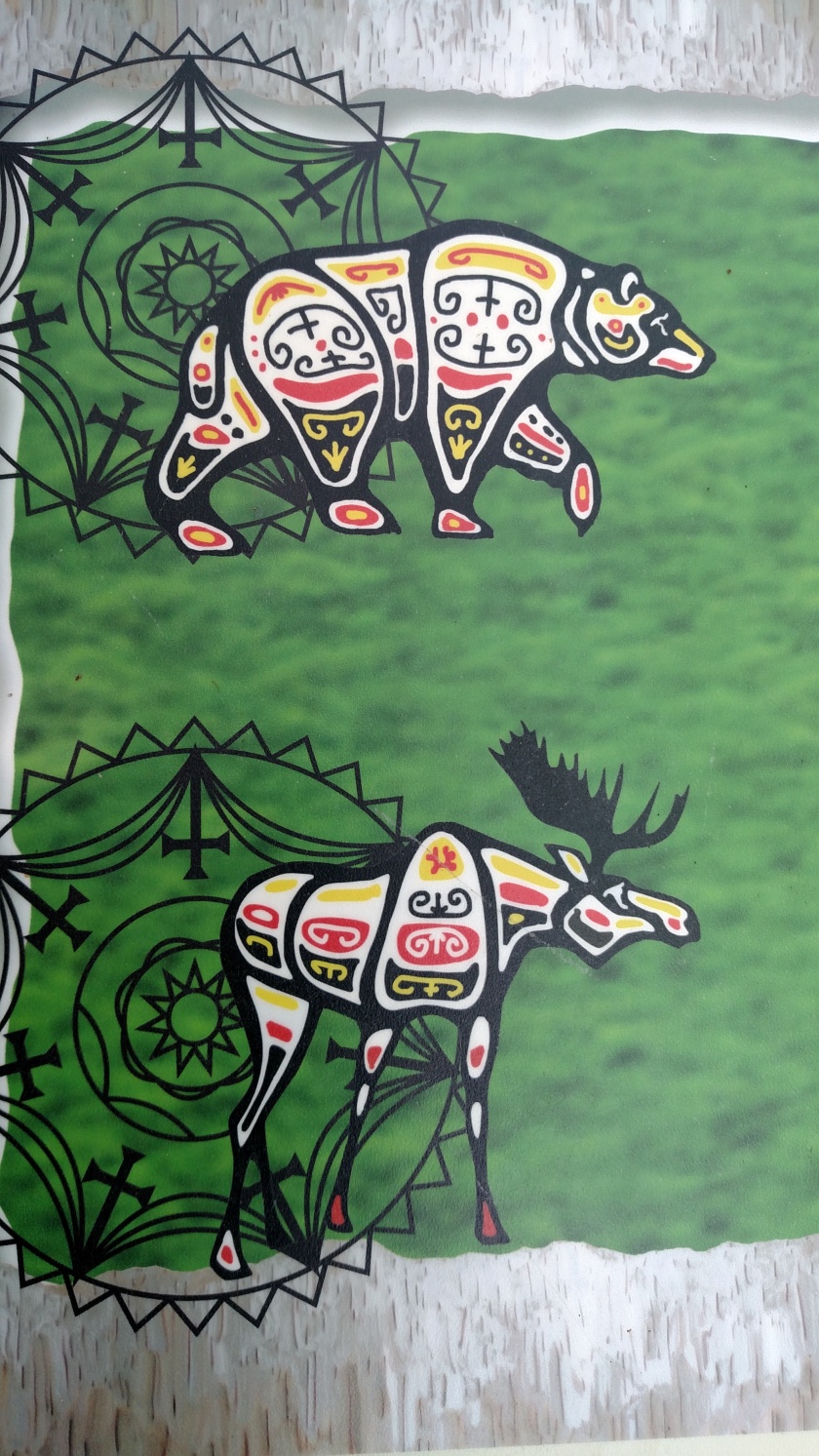 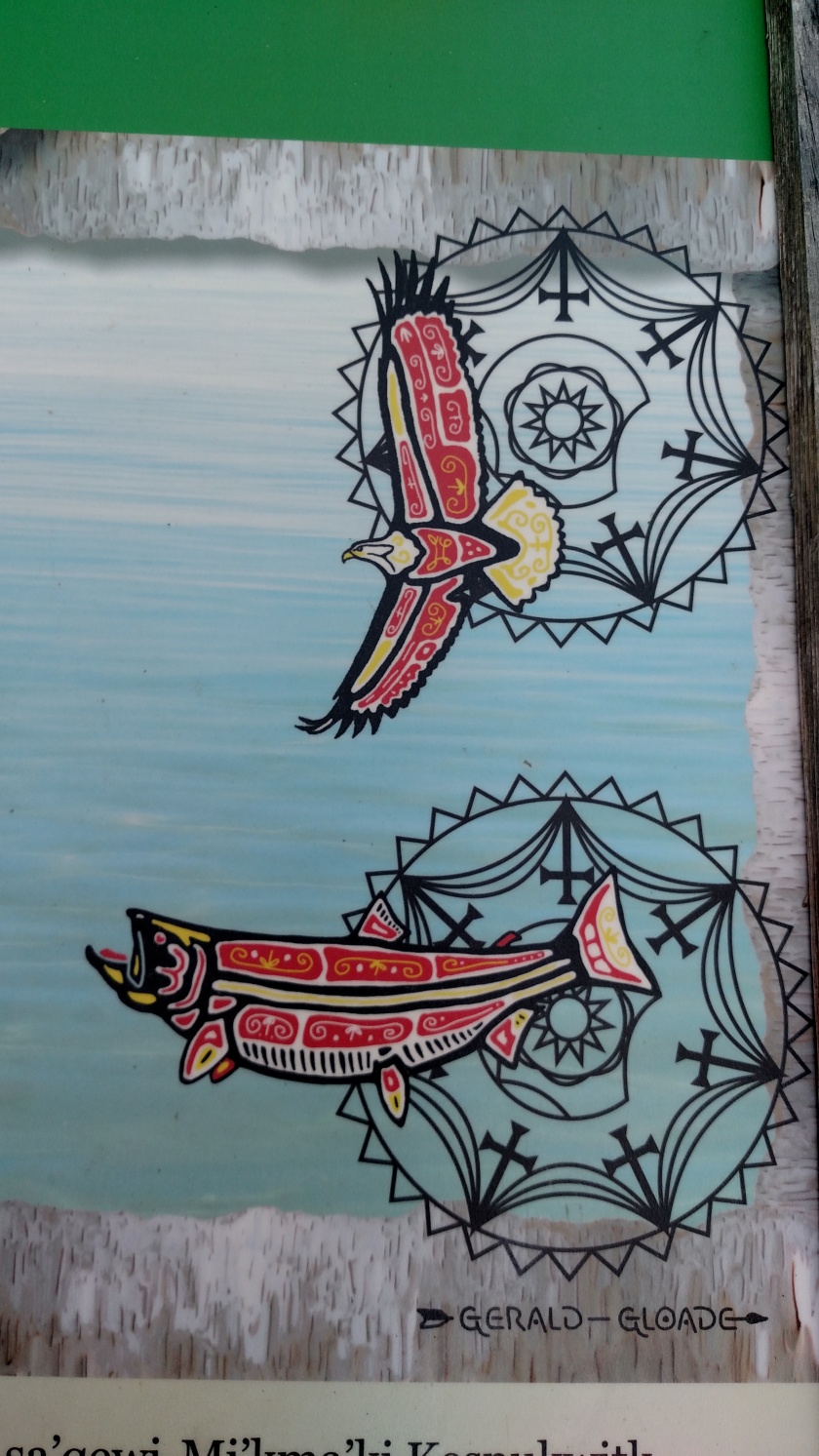