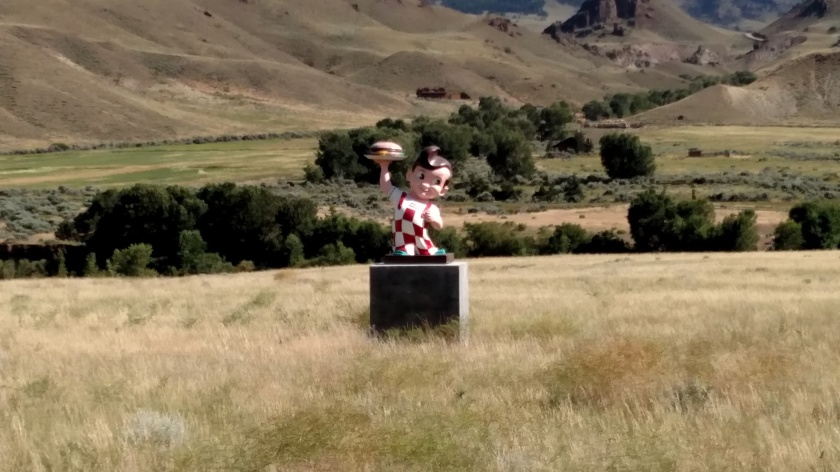 I knew this was here or I would have flown right past it.  Off in the middle of a farmer’s field, pretty far off the road, actually, sits this Big Boy statue on a concrete slab, patiently waiting for someone to build a restaurant behind it.  Apparently this mysteriously appeared in 2013 and no one claims to know anything about it.  I have a full frame picture I can send anyone who is interested.

I didn’t want to march out in the field for a closeup because for all I knew there was some guy inside with a 12 gauge shotgun just waiting for trespassers.  “Git off my land Mister.  Go on now, Git!”

This is on the road between Cody and Yellowstone.  I was trying to get back through the park before one of the roads on the west side was closed for the night (8P-8A for maintenance).  Well I got delayed twice, once by a herd of bison who literally stopped traffic for 15 minutes or more as they blocked the road, and a second time after I came across what appeared to be a bicyclist who had been struck by a vehicle.  I had no cell signal, which was the case most of the day, and had to drive about 15 minutes before I could try and call 911.  I finally found a spot but it didn’t seem as though my call went through.  Sure enough, someone from Yellowstone Emergency Services called me back but I had to stop in a turnout (in a very specific spot where she could hear me) so I could give her the information.  I made it out just in the nick of time but still had a 90-minute ride home.

Surprisingly I didn’t see any wildlife on the drive back to Bozeman (was worried about all those damn black cows).  I got back to the house at 10P local time and it was just about totally dark.  My windshield was plastered with bugs and I could barely see (I need some of those NASCAR tear-offs).  I am one tired buckaroo but my first day in (and out and in) Yellowstone was very rewarding.  And I plan to go back down there tomorrow.

I tried to get the levity out of the way today.  There will only be two posts tomorrow night regarding a more serious subject.