One of the locals told me about this event which was being held at the Kootenai County Fairgrounds.  It is an authentic Native American Pow Wow being hosted by the Coeur d’Alene Tribe.  A pow wow is a celebration, social gathering and friendly dance competition all rolled into one.  It isn’t a party or an event just put on for show, but a serious part of Indian life and tradition.  A prayer was spoken by one of the tribal elders, first in English and then in his native tongue.  Persons of all tribes are welcome at a pow wow, as are non-Indians, and this is supposedly the largest in the Pacific Northwest.  They call it Julyamsh.

The lower picture is the start of the entry ceremony, where all the participants proceed to the center of the arena accompanied by chanting and the beating of drums.  This is where the dance competition would take place.  There were many more participants waiting in the wings when I took this picture. 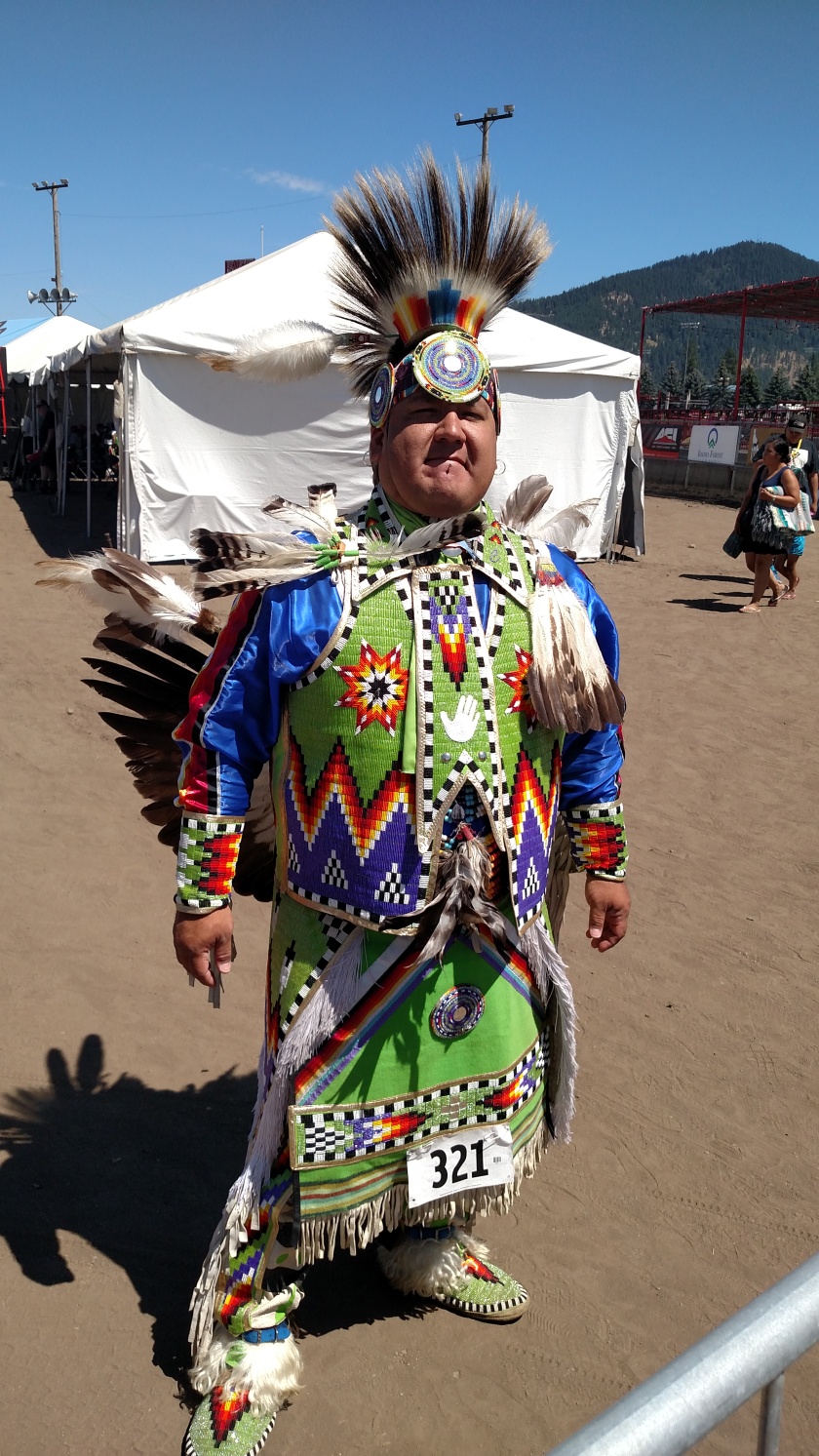 Participants in the pow wow were very willing to pose for pictures and answer questions.  This is a competition which is judged, which is why everyone is wearing a number.

They don’t refer to these as costumes.  They are called outfits or regalia.  The color schemes and designs may go back many generations. 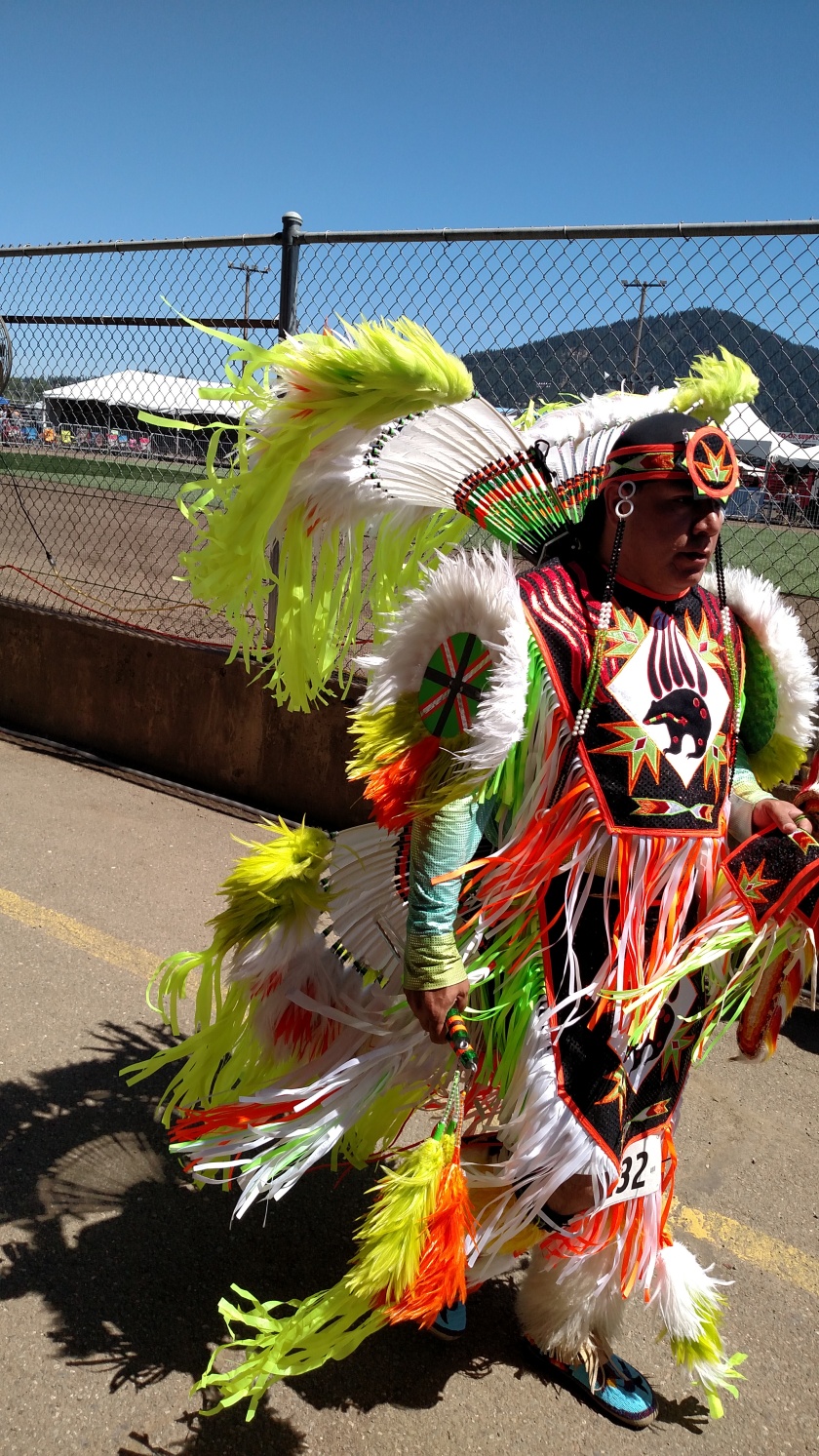 This was an incredibly colorful event.  These men and women could give the Mummers a serious run for their money.  For those of you who aren’t familiar with that reference, the Mummers are a group of various clubs who have a parade in Philadelphia on New Year’s Day each year (check it out on YouTube).  Now IT is a party and event put on for show!

There were many, many participants in this pow wow- young and old.  Unfortunately I had other things to do so I wasn’t able to stick around to see the actual competition (I arrived at about 1030 but then learned things wouldn’t actually begin until 1 o’clock).   I would very much like to go to another pow wow and stay for the duration.

I did get to eat my first Indian Taco while I was waiting for things to get underway.  It was made with flatbread in place of a tortilla, and had meat and beans which were more like chili that what is in traditional American tacos.  Then the usual cheese, onions and salsa.  It was kind of heavy, but yummy and of course I ate the whole thing! 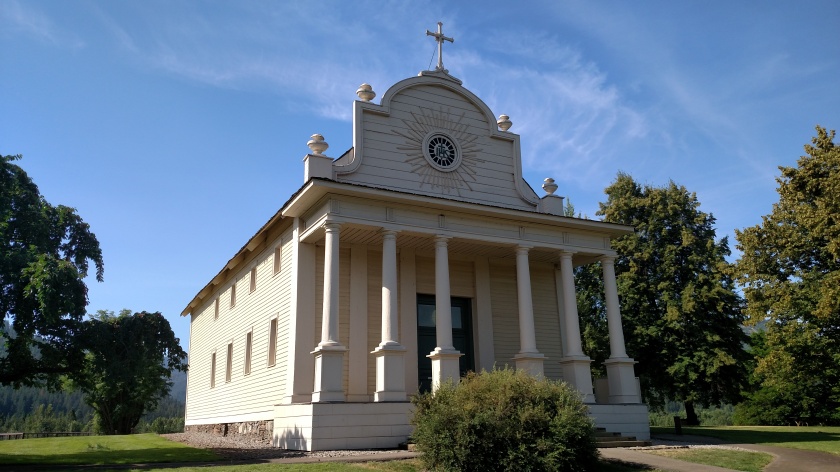 When I got to town on Thursday I stopped at a gas station to clean the bugs off my windshield.  As I was doing that I saw a gentleman come out towards his car at one of the gas pumps.  I said “excuse me, do you live here in this town?”.  He was very hesitant to answer “Uh, yeah” probably thinking I was going to follow him home and rob him.  Once I explained that I was from North Carolina and simply wanted to ask how to pronounce the name of the town he lightened up and became quite a Chatty Cathy.  He and his wife suggested two things to see, neither of which were on my radar.  This post is of one of their recommendations.

The Mission is located on Cataldo, Idaho, about 25 miles southeast of Coeur d’Alene, and is believed to be the oldest building still standing in the state.  Construction started somewhere around 1850.  The walls are 18 inches thick and are made with woven grass and adobe mud, without the use of nails.

The beautiful city of Coeur d’Alene (pronounced COOR deLane) is located on the north shore of the lake which shares it’s name.  The locals refer to the town simply as CDA (pronounced Sea Dee Eh!).

On the left side of the photo you can see a small portion of a pedestrian bridge, part of a 3,300 foot floating boardwalk which surrounds the marina at the fashionable Coeur d’Alene Resort.  That elevated portion of the boardwalk allows larger boats with tall bridge, navigation and fishing apparatus to enter and exit the marina.

On the right side of the photo is a seaplane which I was hoping to ride in this afternoon.  Unfortunately it was a slow day and no one else showed up wanting to fly.  They won’t go up unless there are at least two passengers.  I waited about an hour but finally gave up.  I may try again before I head over to Washington state Monday morning.  I did get to see a seaplane which had stopped for fuel take off.

If you want to stay at the resort (on the lower floors 1-7 only, with a lake view) it will set you back $379 per night, thank you very much.  The resort has a huge aquarium in the lobby with lots of very big fish.

The resort also has a golf course which has the only true island green in the world.  There is a boat which ferries golfers to and from the green on the 14th hole.  The island is computer controlled and is moved to a different location each day (which changes the distance from the tee to the hole, normally accomplished by simply moving the hole to a different location on the green.  Every golf course has a gizmo which digs a neat, cylindrical chunk of dirt out, shaped like a small coffee can, and it is inserted into the spot where the hole was located the previous day).