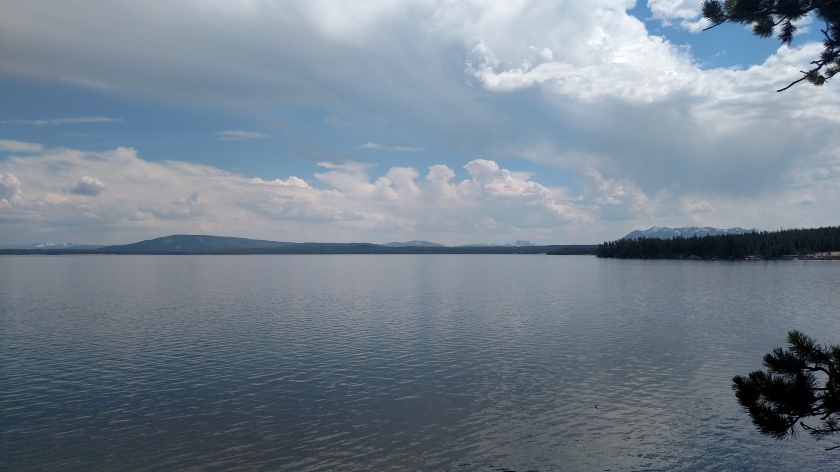 After driving around the park for much of the day I decided to take a break by Yellowstone Lake.  It is in the southern park of the Park and is huge. I got my chair out of the car, grabbed my binoculars and found a nice spot in the shade.  There were no boats or jet-skis (they launch in the northernmost part of the lake) so it was very serene (well, except for the vehicles zipping by behind me).  There were short breaks when there was no traffic, though, and then it really was quite tranquil.

You are only seeing about 1/3 of a very small portion of the lake called the West Thumb.  Yellowstone Lake is at an elevation of 7,733 feet (I got that from the official map of the park.  I didn’t drive out there to verify it with my GPS!). It alone is 136 square miles in size.  For you folks back in North Cackalacky, that makes it seven times larger than Falls Lake.  For those of you not familiar with that reference, it is larger than Durham (City) and Chapel Hill combined.  Despite it’s size, the lake completely freezes over in the winter.

The area north and east of the lake suffered a big fire back in 1988 (really big) and all the trees are dead.  New growth is starting to show, though, and while it will take a while it should eventually regain its majesty.  The 1988 fire was so big that the entire Park closed for the only time in it’s history.  The fire ultimately affected 36% of the park in one way or another.

After about 30 minutes I hopped back in the car and resumed my adventure.  Lots more to see and do!