Here are various things I saw while visiting the St. John’s area which I haven’t put in other posts.

This blue cargo ship was just arriving the first morning I went downtown:

Both of the ships above are short, snub-nosed cargo ships which, I presume, ferry small cube-shaped metal boxes to and from larger cargo ships which couldn’t fit in the harbor.  This is a model of one I saw in the Visitor Center downtown:

And this is a large Coast Guard vessel, parked where the big orange ship had been the first day:

This is one of the several Supreme Court buildings I saw while I was in St. John’s, which is the provincial capital of Newfoundland.

I texted that photo to a friend in Durham shortly after I took it and was telling someone working in downtown St. John’s selling tickets for one of the Hop On/Hop Off transportation companies that I had to re-take it because there was too much street and not enough building.  Well, when I went back to do it again I learned that the photo I took was pretty much my only option since I was trying to fit the entire building, including the turret on the right, into the shot.  Here is the same building straight on from the front:

Struggling with gift ideas to give someone or suggest for yourself?   How about this smart looking quilted vehicle cover…  It even has a screen sewn into the front panel so you can drive with it on and not overheat your motor!  Clever, indeed.  I bet it adds a lot of weight to the vehicle when it gets wet, though. 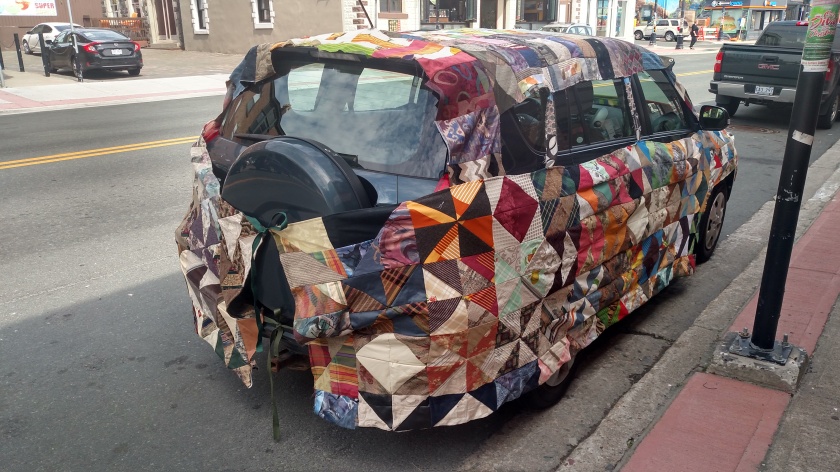 Here are some pretty flowers I saw while taking pictures of some of the houses in town:

This is the impressive Basilica of Saint John the Baptist, high up on a hill overlooking the city:

The Railroad Museum on the south side of town:

And this is a church I saw while descending the hill into town coming back from out at Cape Spear:

A great name for a women’s lingerie shop:

Oh look, people from Newfoundland & Labrador like to visit North Carolina, too!

And finally, the view right before I turned off Torbay Road each night as I was going home.

The second day I was downtown I had a problem with my digital camera while I was taking the shot of the big Coast Guard ship.  I went home to troubleshoot it on the computer and discovered that the tiny plastic slider on the SD card had come off and the card was “locked” so I couldn’t write picture to it.  The solution I found online (put a piece of tape over the empty space where the slider had been) didn’t work so I headed to Staples to buy a new card.  Evidently I’ll need to be more careful handling the card when I take it out every night to download the daily picture bounty to my laptop.

Also, I had discovered that I was putting way more miles on the car than I was expecting to during this trip and was due for an oil & filter change.  I saw a place on the way into town that provides that service and took the car in for the necessary maintenance.

Then I found a place which had all you can eat ribs (oh boy!!) and I enjoyed that for dinner, plus two beers (and entered a contest twice, once for each beer, from which I will be winning a nice barbecue grill courtesy of Labatt’s!).  This was at a chain called Montana’s and they were the best ribs I have had in a loooong time.  I really miss Oh! Brians.