Real time (I know, I know…. I’m still a week behind in posting but this can’t wait)

It is Tuesday morning and I am getting ready to (reluctantly) leave my Airbnb in Trois-Rivières, QC, about halfway between Québec City and Montreal and 1/3 of the way to Ottawa, ON, my destination for the next three nights. My host is out of town, out of the country actually, and when I arrived last night his brother showed me where my room was and gave me a quick tour of the house. I am staying in the basement but in an area his brother very accurately described as my host’s ManCave. Bar, pool table, popcorn machine, video projector, plush leather furniture, fireplace, should I stop now??? 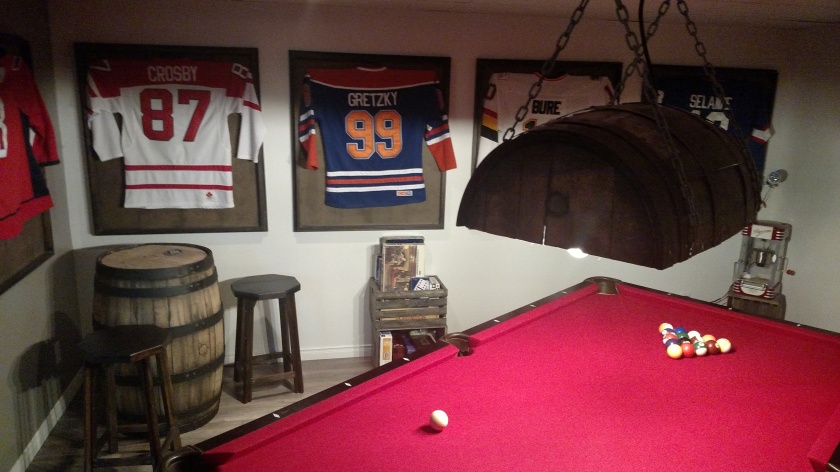 There are pictures all over the walls of this guy, taken literally all over the world. I don’t know what the hell he does but I want to be him (unless he’s a drug dealer or the brother of Jeffrey Epstein who wasn’t named in the will).

But let’s talk about the shower, which I got out of about 15 minutes ago.

He’s got one of these huge, high tech, walk-in showers with water jets coming out of every conceivable nook & cranny. My host in Gaspé had one of these, too. Well – no one tells you how they work.

As I did in Gaspé I gingerly turned the two square knobs until I determined the right mix of water pressure and hot/cold mixture. I went about my business and I admit I enjoyed the luxury.

Then I went to turn it off.

I didn’t remember which knobs I had turned which way and just twisted both counterclockwise, assuming that was OFF. I was mistaken. Out of the “wand” thingie below the two square knobs – ZAP – a blast of ice cold water right to “zee privates”.

See, I told you it couldn’t wait.

I swear, the company that manufactures these things probably had hidden cameras installed and I’m probably on YouTube already. DON’T LOOK, ETHEL!! (Shout out to Ray Stevens and The Streak).

My host deserves everything he’s got but this is a classic example of why some people (me) shouldn’t have nice things. It’s about me. It’s always about me.

One of the primary reasons I came to Gaspé and spent an extra day there was to go through this National Park, which is pronounced  for-ee-yaw.  No emphasis on a particular syllable, it just flows.  There are two theories as to it’s meaning but neither one really explains it so I’ll just skip it and we’ll enjoy the simple beauty of the name.

I had now driven all the way around Forillon on Route 132 so it was time to venture inside.  I had done everything else on my list for the day and figured I had all afternoon to explore the Park.  Unfortunately my visit would be short lived.  Let’s just say all the beautiful pictures from earlier in the day were the calm before the storm….

1151 am – I had gone in the south entrance of the Park and had found this beach.  Here is a four shot, left to right panorama: 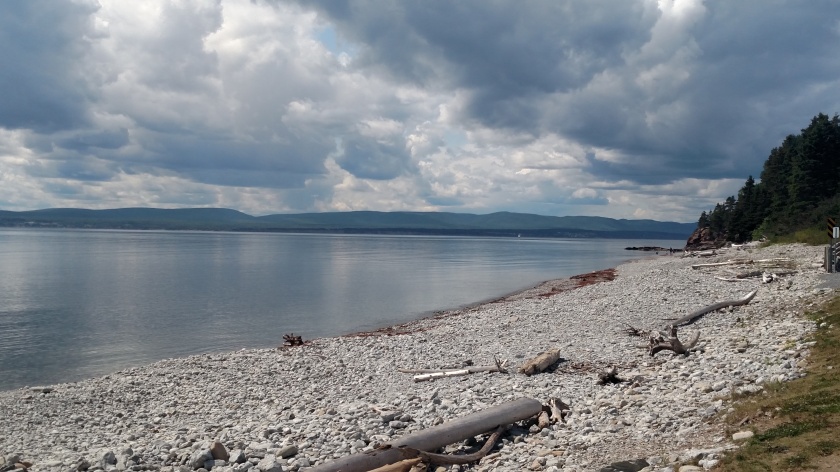 A little threatening in the last shot perhaps but the hill on the right obscures what’s coming.  Things were fixin’ to go downhill real fast.

A little further up the road (literally) I topped a hill, parked at the bottom and walked back up to take a photo showing the road descending back down towards the water.  I had also taken the digital camera with me to get some zoom shots.  Time now is 1206, only 15 minutes after the beach pictures and I still hadn’t noticed what was about to happen.

I felt a few drops and looked back over my right shoulder.

In that interval I had used the digital camera to zoom in and take photos as the rain overtook a small town on the other side of the bay.  I’ve learned that photos of rain taken with the zoom are just a blurry mess and are not blogworthy.  I now knew the storm was quickly overtaking me as well.

Suffice it to say I made a hasty exit to head back to my Airbnb northwest of the Park and check the weather radar.  I’ve learned that the radar app I use on my phone doesn’t always give an accurate depiction of conditions in many of the places I’ve been while in Canada.  I love it in the US but there seem to be lots of “holes” up here which make it appear clearer than it really is.

It started dumping rain before I could even get back out of the Park.  I hadn’t realized the road I was on was a dead-end and when I did I had even further to drive to get out to the main road.

After I got back to the house and checked the radar on my computer I determined I was effectively in for the day and spent the remainder of the afternoon trying to get caught up with some postings on the blog.

Some of the photos I have seen of Forillon are amazing and I have now officially decided I am coming back to spend even more time in this part of Canada next year (Yay!!).  I have a growing list of places to revisit and will budget more time in various places, as well as adding some new destinations.  I actually considered backtracking at the end of this trip but was told that, especially in Newfoundland where I plan to spend LOTS more time, snow in September may actually be an issue.  Parts of western Canada are already getting snow.

I’m I got another bite at this apple.

As I was driving in to Gaspé from the south on Monday I saw this long ago abandoned house and outbuilding off to my left.  It was late afternoon and the sun was low and behind it from my vantage point so I knew any pictures would look “washed out”.  I made note of the location and hoped the opportunity would present itself to come back with the sun at my back.  Well here I am.

This was around 1030am Tuesday after I had driven through Gaspé and continued south on Route 132 towards Percé. 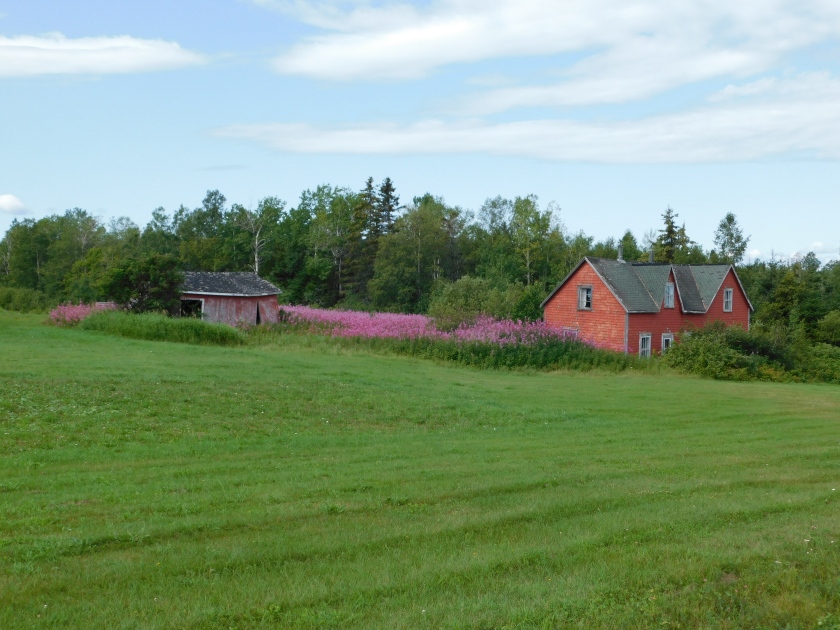 And from just a tad further up the road, looking back:

These shots were taken from roughly the same vantage point as the two previous posts but looking southwest towards the town of Gaspé.  This is from Route 132 near Penouille. 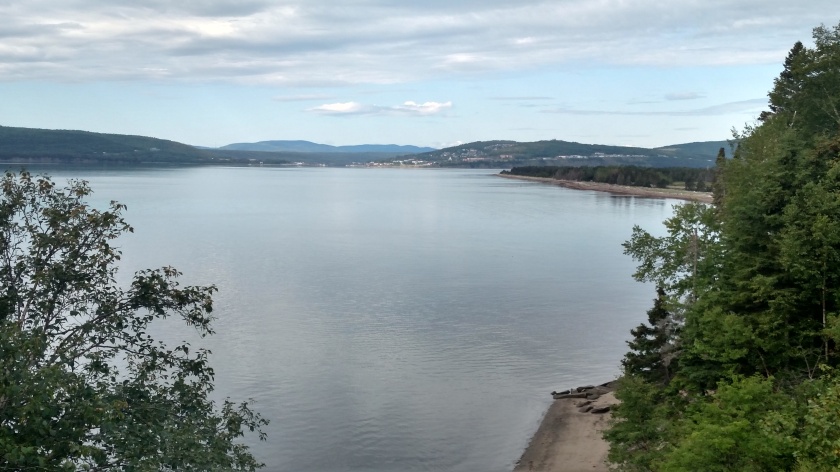 The photo above was taken with the smartphone camera.  I went back to the car to get the digital camera and got into position to get some closeups using the zoom lens.

This is as I moved around to the “safe side” of the guardrail next to the road.  These green plants almost look fake but they are quite real. 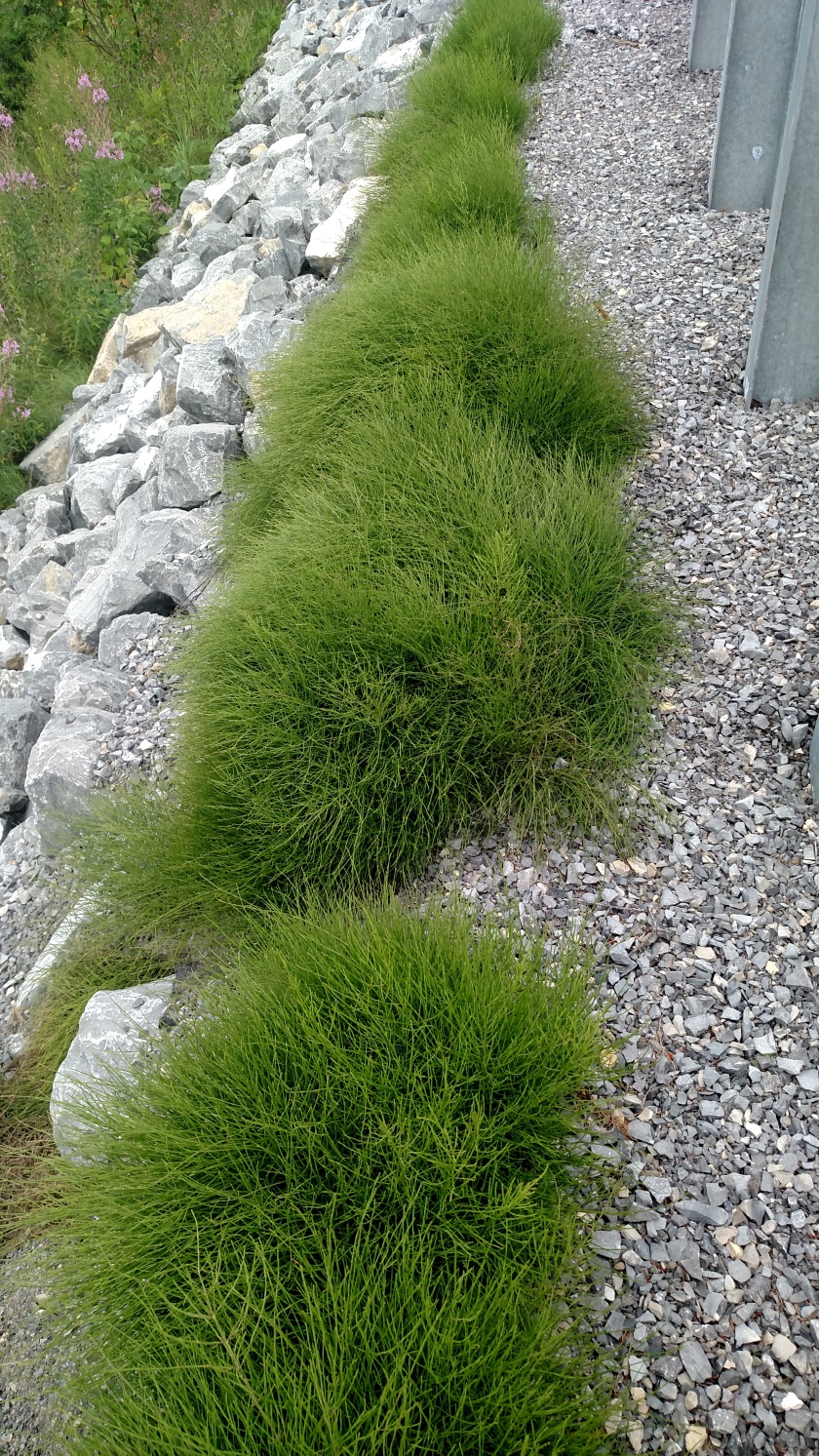 OK – In position, you may fire when ready….

I’ll borrow the name of the first manned lunar landing location to describe this place.  And to use one of long time late night talk show host David Letterman’s favorite terms – the sense of calm and peacefulness here was palpable.

Looking south from the area between Cap-aux-Os and Penouille on the northeast end of Gaspé Peninsula, Québec province, Canada over Gaspé Bay: 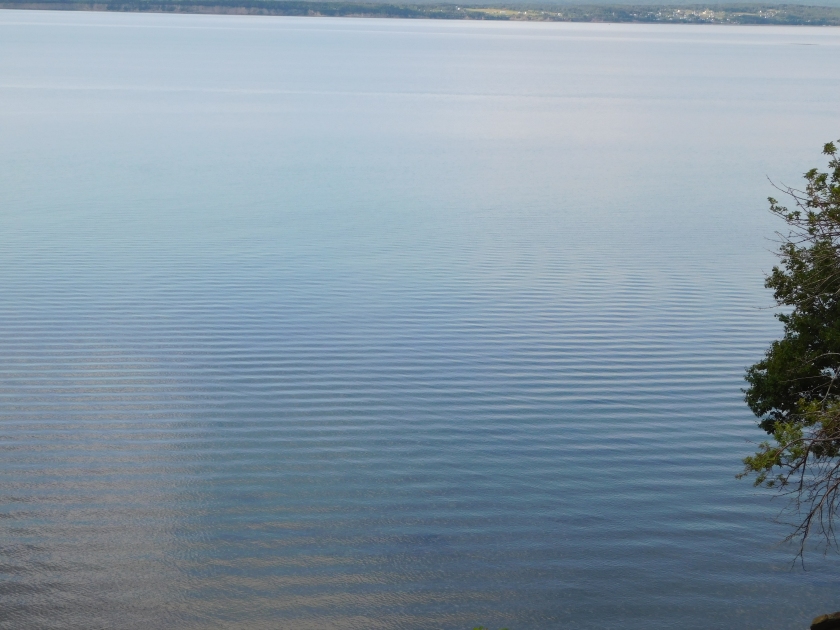 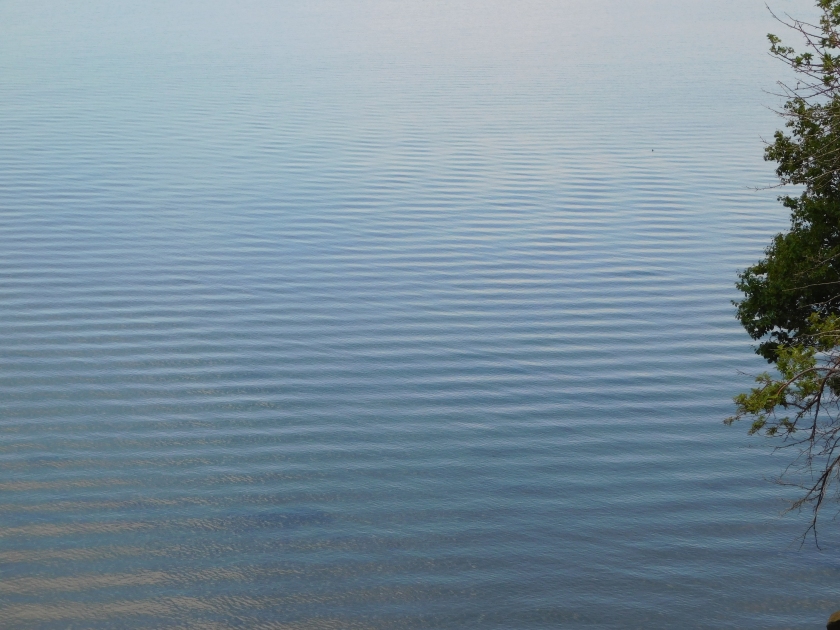 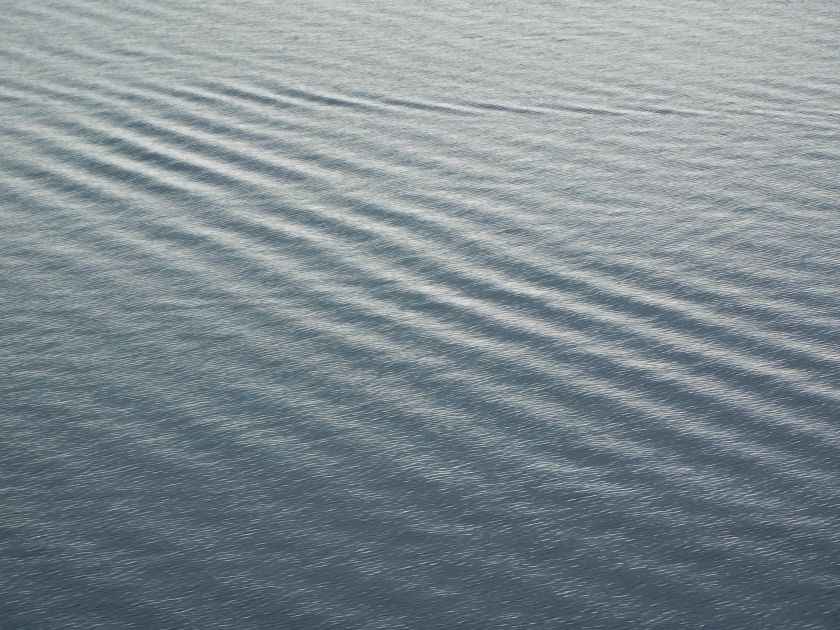 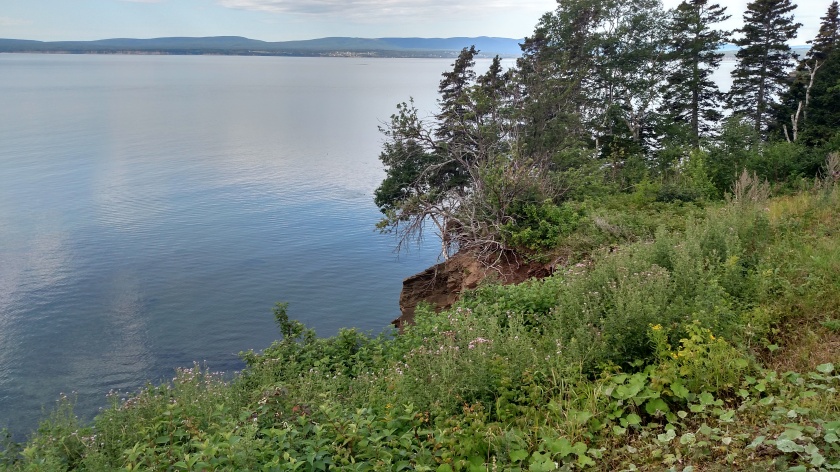 And once again, after taking the photos I put the cameras away and just stood and looked.

An anonymous blog viewer commented on a photo I took as I entered the town of Cap-des-Rosiers which showed the dead calm of a small river leading out to the Gulf of St. Lawrence (on the north side of the Gaspé Peninsula).

After taking photos at the lighthouse, of it and of birds in and over the water, Route 132 took me around the bend and back west towards the town of Gaspé.   After taking photos at the lighthouse, starting around 9am, I took a break and just enjoyed the view.  These photos are about an hour later, somewhere between Cap-aux-Os and Penouille.  They were taken from a random pull-off area which gave a stunning view of Gaspé Bay.  These are looking east towards the area I had just come from.  The next post will be looking south and west towards Gaspé from the same vantage point. 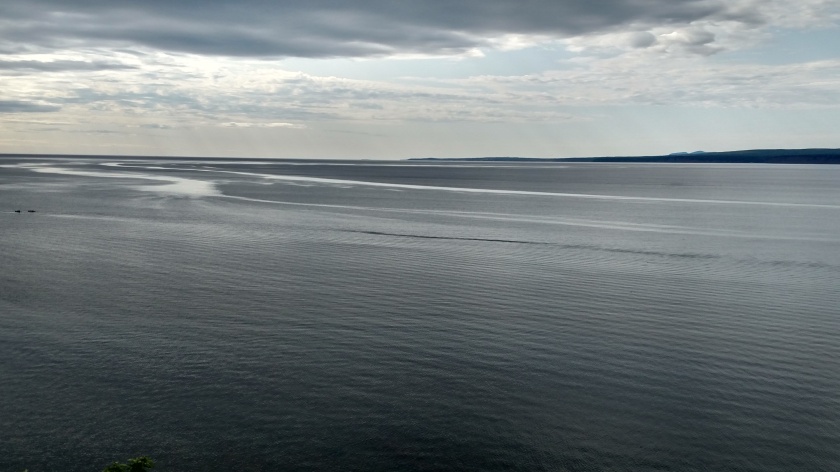 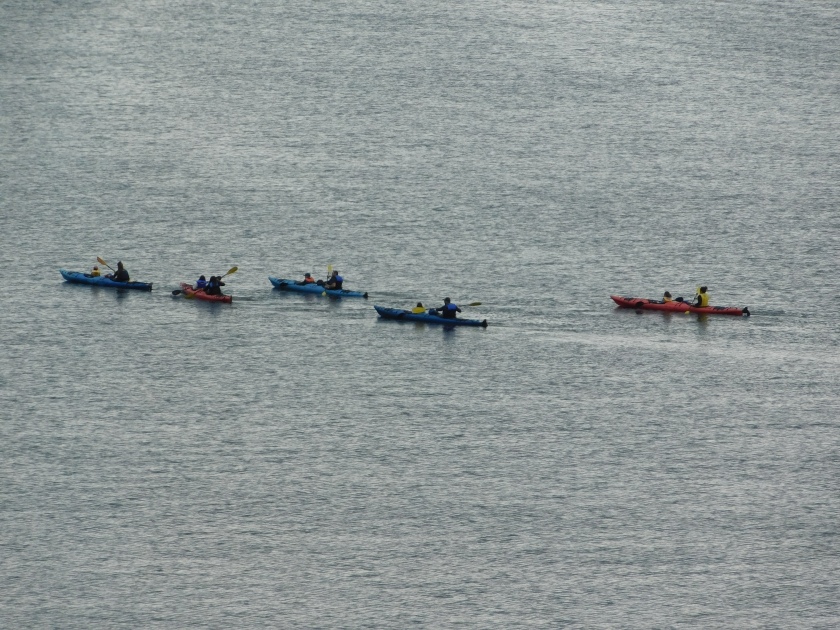 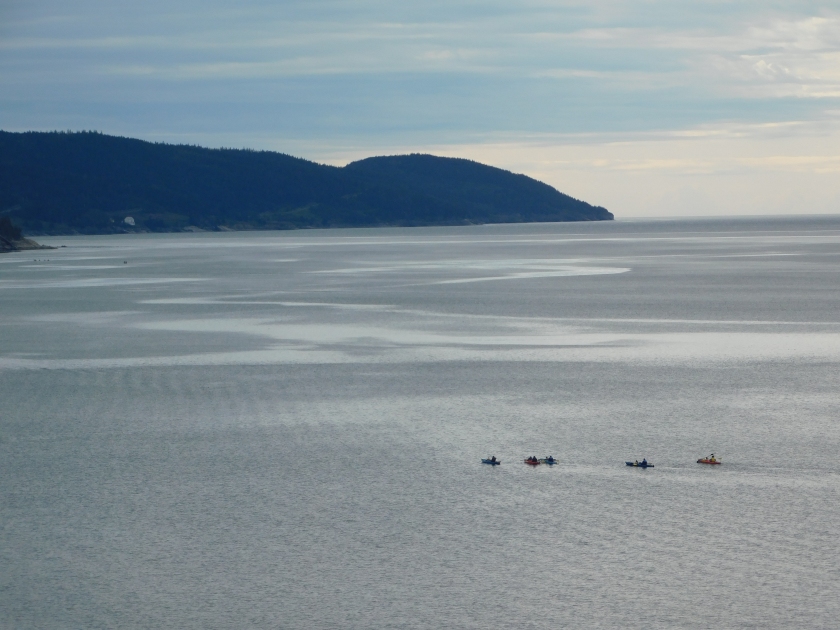 My friend Shawn added a comment to the lighthouse post I made yesterday as to the “watercolor” appearance of the background.  This led me to go back and look again at a few shots I took earlier that morning, shortly before coming upon the l’Anse-au-Griffon statue.  When I took these I specifically remember seeing shadings and hues in the clouds ,and reflections in the water, which I hoped the camera would catch.  You’ve heard the saying “the picture doesn’t do it justice,” and I was hoping it would this time….

Those were taken about 730 in the morning local time (and for you computer geeks that might have noticed, the timestamp on the photos taken with my smartphone is exactly one hour ahead of real time.  My phone hasn’t yet made the adjustment back to Eastern time which occurred when I crossed in to Québec province over a week ago).