The car trouble I experienced after getting off the ferry I had ridden back from Newfoundland on Sunday forced me to spend three more nights here, with the very same Airbnb hosts I had stayed with for three nights two weeks ago while touring Cape Breton Highlands National Park and The Cabot Trail west of here and before boarding the ferry north.  The ferry terminal is literally just up the road from their house.  I called them in my panic Sunday night assuming that they were booked.  I knew it wasn’t available, for Sunday night anyway, back in May when I made all my reservations for this trip, but called thinking perhaps they might have had a cancellation.  Fortunately for me they did, and Monday and Tuesday nights were available as well.  Whew – BIG sigh of relief!

Unfortunately I didn’t make it over to Sydney, just east of here, where my original reservation for Sunday night was, or over to Prince Edward Island for the first two of four nights I have reserved there (in the same house).  I did not cancel any of those nights so those hosts will get paid in full.  It wasn’t their fault that my car acted up and they, in good faith, had held their rooms open to welcome me.

All that said – here is a quick look at the little town of North Sydney: 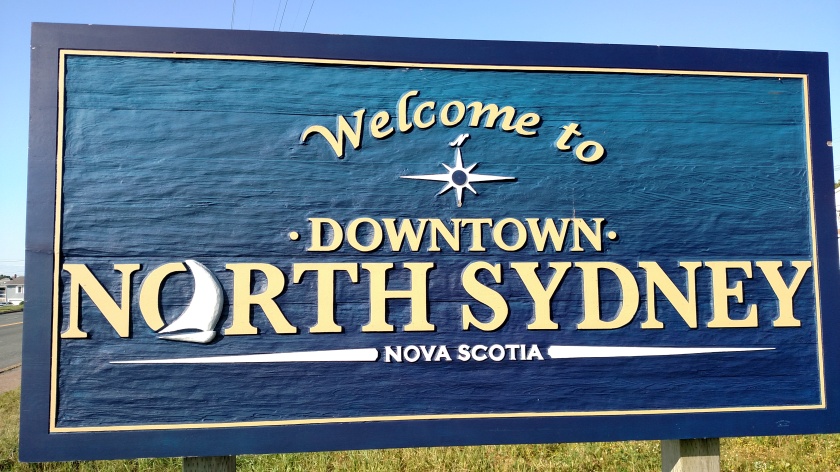 Here is the ferry terminal as I walked in to town last night to get some exercise and to make a purchase I was unable to complete earlier in the day. 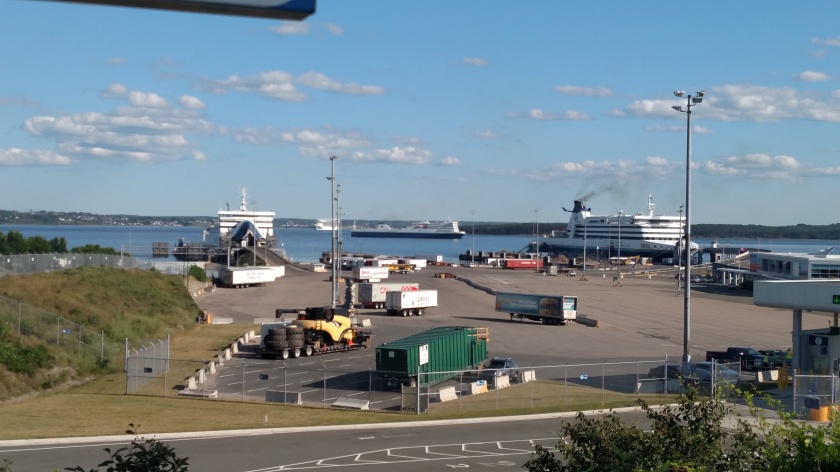 On the left, directly facing the camera, is the Leif Ericson, which I had taken a photo of from our ship as we docked on Sunday.  As I explained in that earlier post about the ferries, it sails from here to Argentia, Newfoundland and back every other day (it is a 16-hour trip one-way so it goes up one day and returns the next).  The ship on the right is the one I had ridden on Sunday and as I took this photo was just starting to disgorge the travelers from today’s journey.  Between those two is a third ferry which appears to be identical to the one I had ridden on.  The presence of that ship puzzles me – it was moving slowly left to right in the photo as if waiting for one of these two ships to leave (there are only two docks at this terminal).  I went in two stores to look for the item I was trying to buy and when I got out to the water just a few minutes after I took this photo, it was gone!  And if you look closely at the left side of the photo, between the Leif Ericson and the mystery ferry, there is a very tall, white cruise ship just setting sail, presumably from Sydney, Nova Scotia – just east of here.

After making my purchase at the second store I walked down to the waterfront across from the “main drag” where several restaurants and shops are located.  Before even getting to the water I saw this vehicle parked along the street.  I had seen it driving earlier in the day as I was walking back home from the repair shop and wasn’t quick enough to get my phone out and take a photo then. 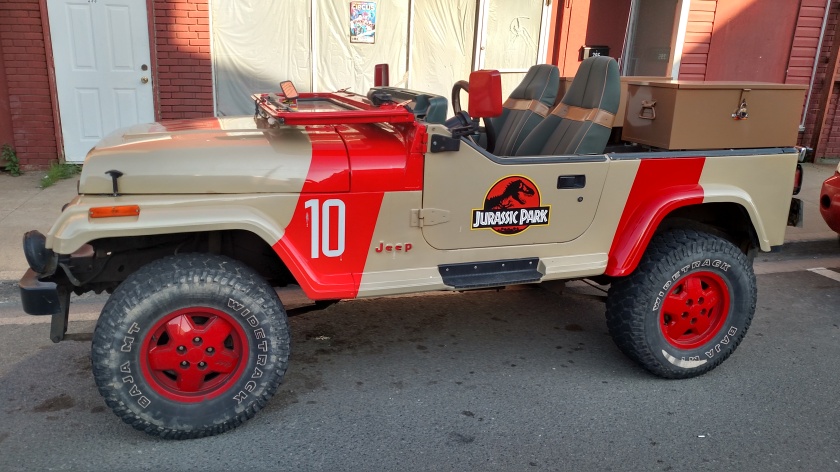 It even had a badge hanging from the rear view mirror (which is on the windshield laying flat against the hood – it is a Jeep after all…).

Further down Main Street (which I believe is actually called something else but let’s just pretend) there is a boatyard which makes boat repairs.  This large red ship was back in the water after having been in drydock two weeks ago when I was here.

And last night this large blue ship was in drydock.  It wasn’t here when I walked downtown the night before.

I’ve been fortunate, in some ways, to have had this unexpected break.  It gave me a chance to get caught up on the blog and after getting over the initial panic and uncertainty of what happened Sunday night, actually relax a little bit and enjoy two beautiful days.

And I’ve been getting more exercise.  I bought a Fitbit about a year and a half ago and last fall set a minimum 10,000 steps per day goal to try and walk more and build up some more stamina.  When on my trips, especially on travel days, I don’t always hit that goal.  The last two days, however, with multiple walks to the repair shop, Walmart, the grocery store and downtown, I walked 17,189 steps on Monday and 23,456 steps Tuesday – a personal daily best for me.

One thought on “My 3 bonus nights in North Sydney, NS”