Tuesday I drove from Sparks, Nevada to San Rafael, California, just north of San Francisco.  Here are some things I saw along the way:

I noticed more haze and smoke than I had seen just south of Reno the day before when I got on the dreaded interstate in Sparks Tuesday morning.  I very shortly crossed back in to California and started to gain altitude as the highway took me west.  The further I drove the worse long distance visibility got.  I even skipped two overlooks (Vista Points) because there really wasn’t much to see.

I stopped in Truckee, CA to go to the visitor center but it didn’t open until later in the morning.  I did see this building nearby, an old “Flying A” gas station which is now home to a high-end German owned real estate company which specializes in very expensive properties, boats and yachts at locations all over the world.  They have an office here because of the proximity to Lake Tahoe.

You don’t know how badly I wished I could have really bought gas here!

I got back on the highway and drove further west, towards Sacramento.  I made a two-hour stop there, which I will address in other posts, and then proceeded west to my ultimate destination in San Rafael.  Traffic was not bad at all and I made great time, so I got out near the coast by early afternoon.  I exited the dreaded interstate on Route 12 and headed northwest towards the Napa Valley.  I will also show pictures from the towns of Napa and Calistoga in other posts.

When I left Napa I drove northwest on the “Silverado Trail,” one of my primary scenic roads which runs parallel to, but slightly further east than, Route 29 which is the congested main thoroughfare between Napa and Calistoga, a distance of about 30 miles.  During my pleasant and relaxing drive I saw signs for different wineries on both sides of the road every 2 or 3 hundred feet.  Most of them were small wineries whose names I didn’t recognize but there are some of the big players here, too.

Here are some photos from one of the wineries showing the vineyards.

I reached out and touched the leaf next to the grapes to give you an idea how tiny the grapes are.  These looking like relatively young plants and there are older, more mature groves which have larger grapes.  The signs don’t tell you exactly what kind of grapes they are growing but most vineyards grow a variety.

There.  Now you’ve seen one.  They are all pretty much the same, and I now see vineyards and wineries all over the country.  Some merely grow grapes which are processed elsewhere.  The bigger operations actually process and age the wine onsite.  Many offer tours but more and more are by appointment only.  Some have large, very impressive buildings where they offer wine tastings and have retail shops.  Some now charge admission for their tastings.  I didn’t stop at any of them.  I tagged along with my brother David and his wife Kendra about 20 years ago and we visited Robert Mondavi and a small, private winery in this area.  I don’t drink while driving during the day so I just passed all these places by.  In my 30-mile drive between Napa and Calistoga on Tuesday I bet I drove past 250 different operations, and this was just in a small area.  Wine is big business in California.

After having a late lunch and walking around Calistoga a bit I drove out towards “The 101” to get down to San Rafael.  Before getting on the highway in Geyserville I saw a few pieces of artwork next to the highway. 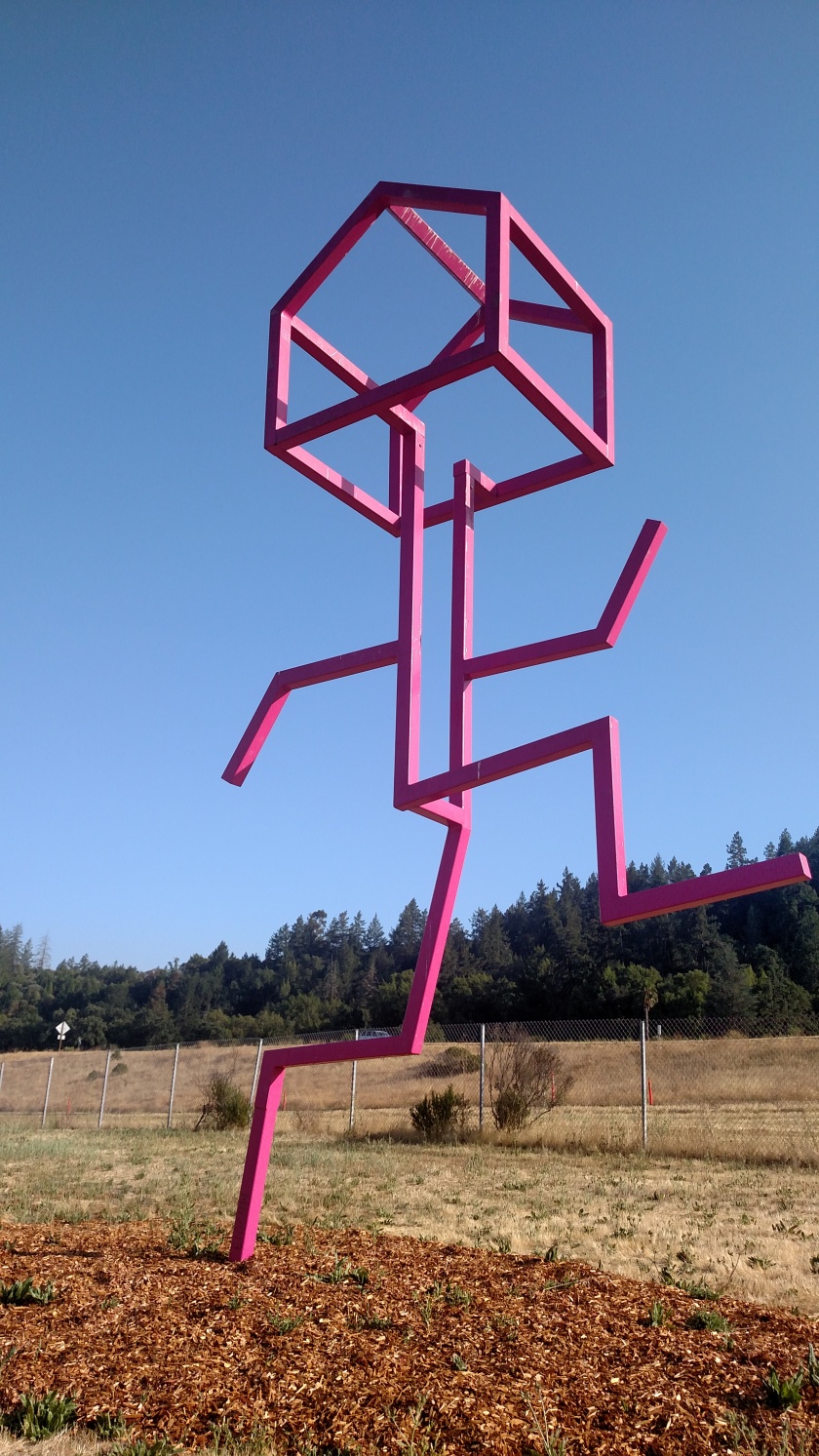 What really caught my eye was this huge 10 foot by 10 foot square made up of little metal squares which had colors and patterns on them (birds, butterflies, feathers, etc) which are mounted loosely by wire so they can move slightly in the wind.  The metal is also very shiny and reflects the sun.  As I drove towards this piece (called, simply, “Shimmer”) the sun was starting to set in the western sky and the road took me in a perfect alignment to see the piece sparkle in the sun. 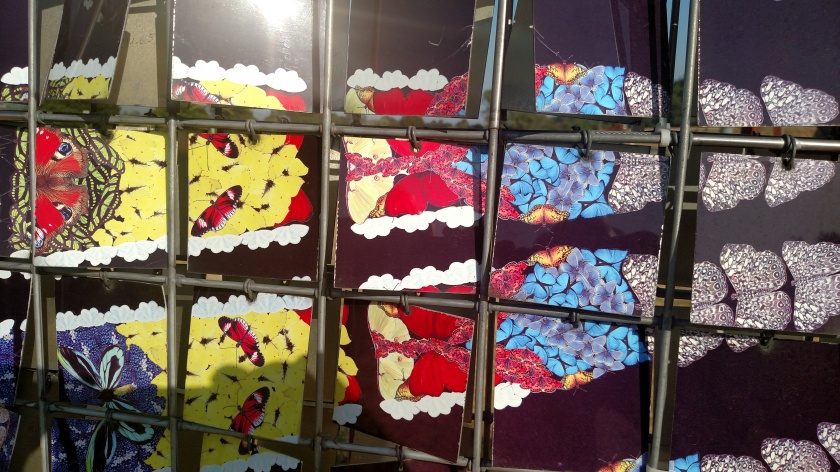 This was the pattern on the other side, which would “shimmer” for drivers going north on “The 101” in the morning with the sun behind them.  It is a different pattern but I couldn’t get a wide shot because I would be looking towards the sun and couldn’t get far enough away to see the whole thing without the camera being blinded by it. 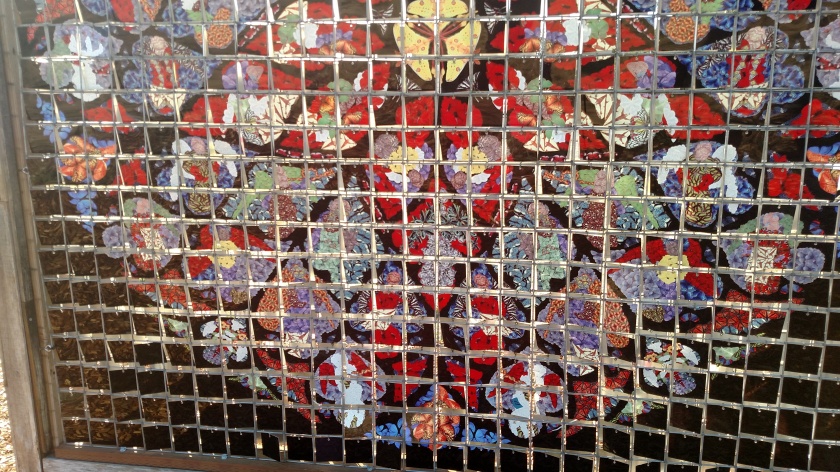