Tuesday as I drove north up Route 1 from Point Reyes, CA I went through the little town of Tomales.  This is a classic “blink and you’ll miss it”  American town.

This is the William Tell House, where a sign on the front door advises would-be patrons that it is closed indefinitely, sorry for the inconvenience.  That is a restaurant fixtures truck parked next to my car so evidently they are making some upgrades. 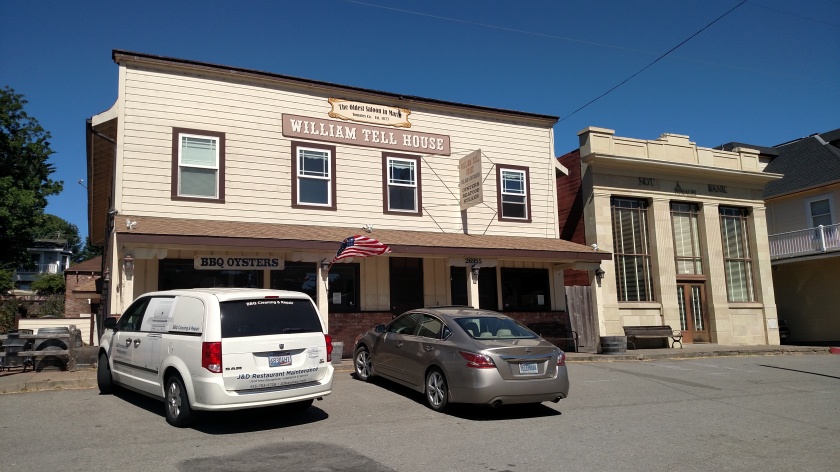 Next to that building is one mysteriously labeled “Not A Bank”: 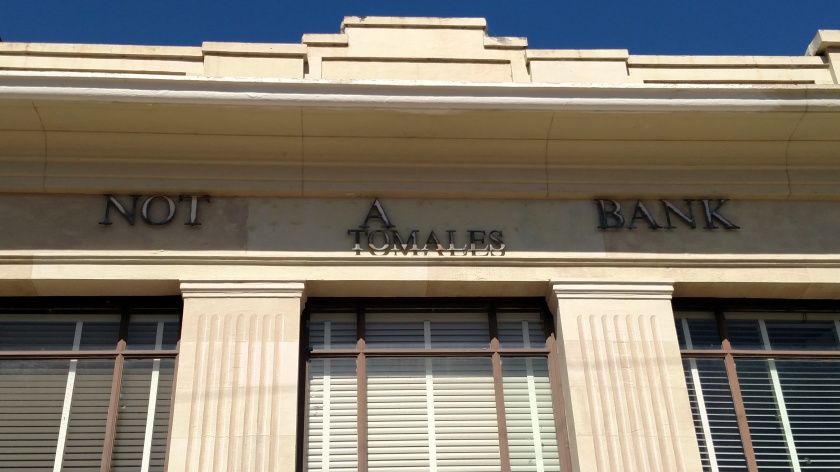 And if you don’t want to pull a muscle in your neck looking up, the door makes it very clear:

Perhaps they got tired of getting robbed?  At first I thought someone cleverly deleted letters from First National Bank of Tomales but laying in bed this morning it occurred to be that that sequence of letters wouldn’t make sense.  Oh well, keep me in suspense.

Next door is the Continental Inn, which seems to be doing quite well.

And across the street is the General Store and the Post Office:

There were a few small shops on the other side of Route 1 but the morning sun was behind them, making pictures difficult.

Route 1 curved inland for a short while after Tomales and then the coast started to get interesting (see Morning/Early Afternoon/Late Afternoon posts which follow).

Saw this about 20 minutes ago as I drove north on scenic Route 128 between Philo and Navarro, California. I knocked on the door at the house and spoke with the woman who lives there. She said that, unfortunately, it has gotten used too often the last few years.

UPDATE – I hadn’t noticed it yesterday but this burnt-out hill is only 2 1/2 miles from the woman’s house:

Tuesday I drove from where I had been staying in San Rafael, CA north to Ukiah, CA.  Much of the drive was along US Route 1 which, in many places, runs right along the coast.  Once I reached Route 1 in Point Reyes it was roughly 100 miles north to Manchester, where I had to turn and head inland towards Ukiah.  Here are some of the things I saw throughout the day: 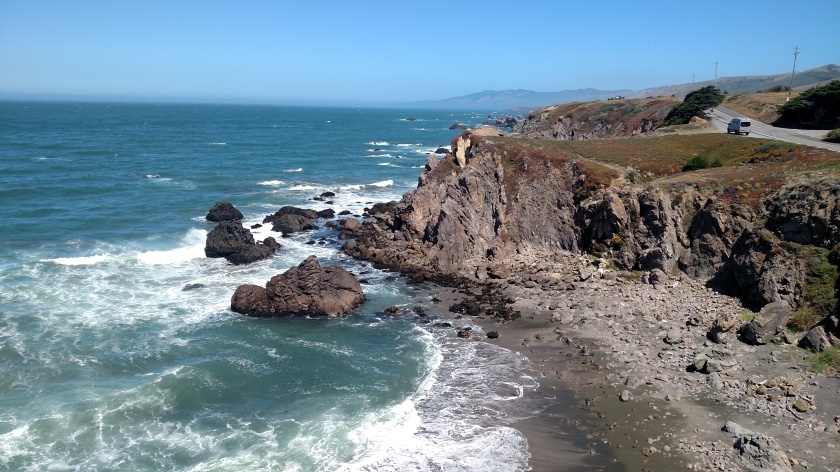 And if wildfires and earthquakes aren’t enough to keep you on your toes, there’s always this.  If fire doesn’t get you, water might.

This was the view from the deck (and practically from my table) at the restaurant I went to for lunch.  The Jenner Inn, which came highly recommended, has new ownership and is now only open for dinner.  I went across the road to the Jenner Post Office and the woman working there recommended another place up the road.  It was an excellent choice.

This is a three shot panorama from right to left.  This is actually the Russian River draining into the Pacific. 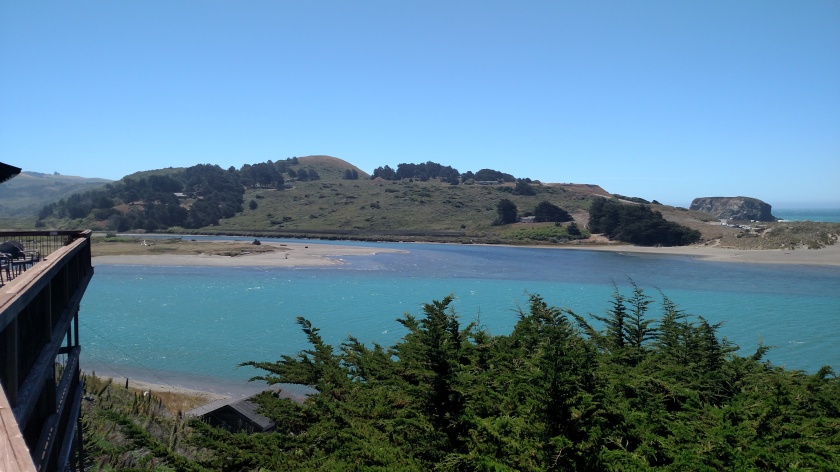 Tuesday I drove from where I had been staying in San Rafael, CA north to Ukiah, CA. Much of the drive was along US Route 1 which, in many places, runs right along the coast. Once I reached Route 1 in Point Reyes it was roughly 100 miles north to Manchester, where I had to turn and head inland towards Ukiah. Here are some of the things I saw throughout the day:

After having lunch in Jenner I continued up the coast towards Manchester. I actually backtracked a little ways to some of the more interesting things I had seen to take a break and just watch the birds fly and sit and listen to the ocean. It was INCREDIBLY windy – a very stiff, steady wind (in North Carolina we often give them names…). Believe me, at times it was hard to just stand and hold the camera out in front of me. I once had a client in North Carolina who came to our office when it was extremely windy in Durham and commented “I don’t know how little people stay on the ground”. I was worried that the constant movement might make my pictures blurry but fortunately they turned out ok. Even with full sun the temperature was only 60 degrees which made the wind chill about 10 below. It really didn’t feel all that cold, even though I was only wearing shortpants and a t-shirt. 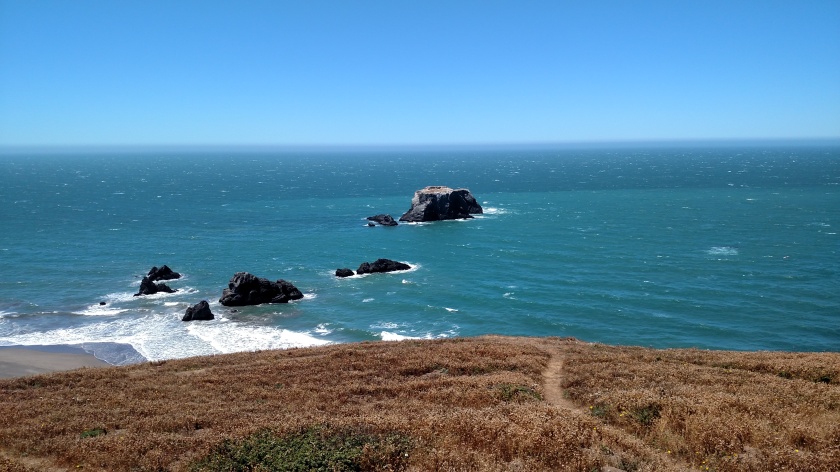 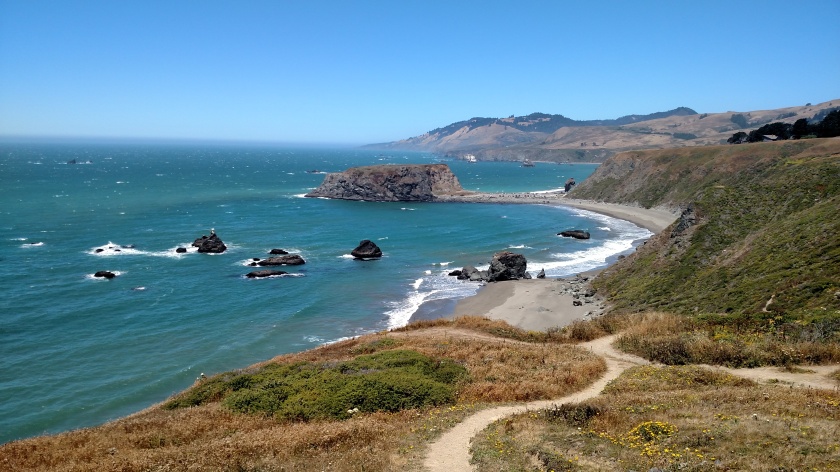 Below is the same rock formation seen at the top of the first photo of this post. When I drove up the road a short ways from where I had been parked I noticed it had a big hole through it. Some of the formations in the next post (Late Afternoon) also have such holes, creating an arch above them.

This is a beach called Goat Rock. If you look closely you’ll see vehicles parked along the beach access area.

As I was driving back out to the main road I noticed this phenomenon to the south. If you look very closely a little right of center you’ll see a “cloud” rising up from the ocean surface and going towards land. I tracked down a lifeguard who I had seen driving from beach to beach and asked him what it was. It is fog forming. I could see a layer of fog out at sea (which oddly looked white while wearing my sunglasses but gray when I took them off) and while I could clearly see this white cloud of fog forming near the coast with my sunglasses on it was more difficult to see without them (and in the photo). 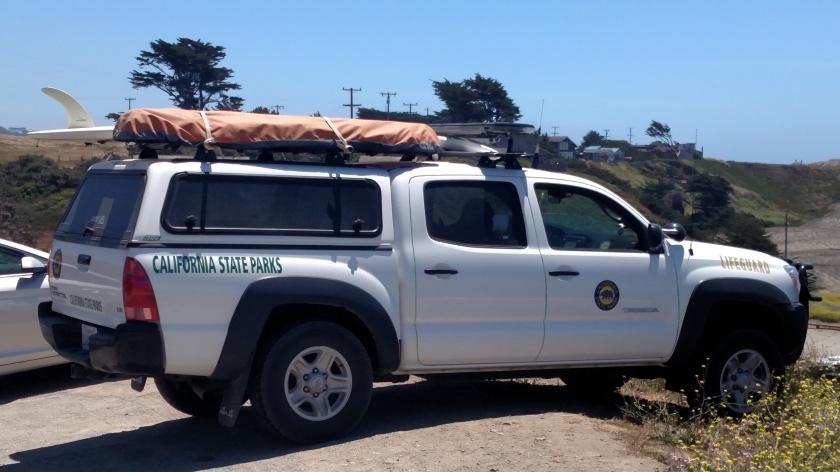 Looking north up Highway 1 I could see that this was where the road was going to take me next.

And this was the the view looking back down at where I had just come from. 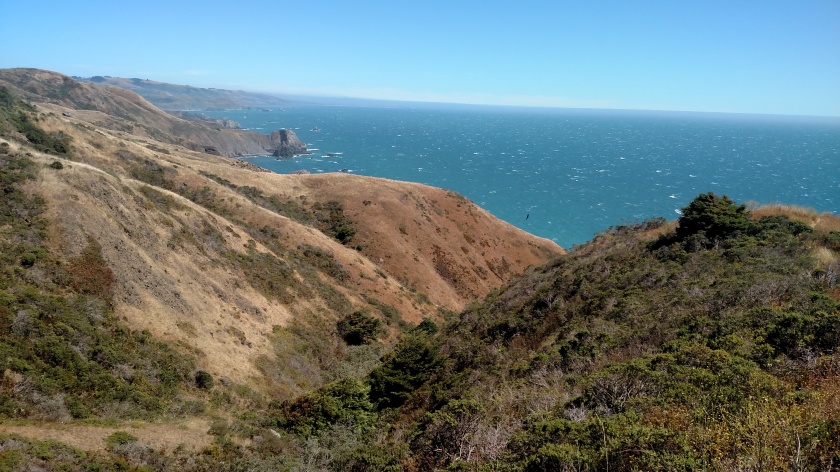 Looking north this was the hill above the road: 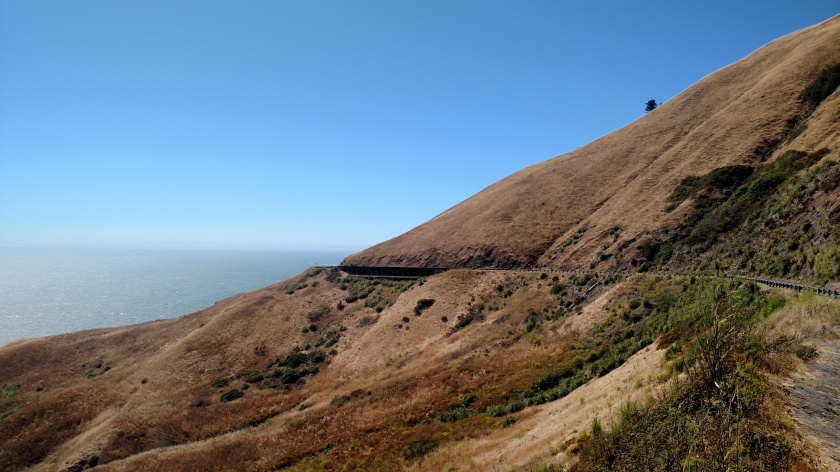 And as the hill descends to the ocean: 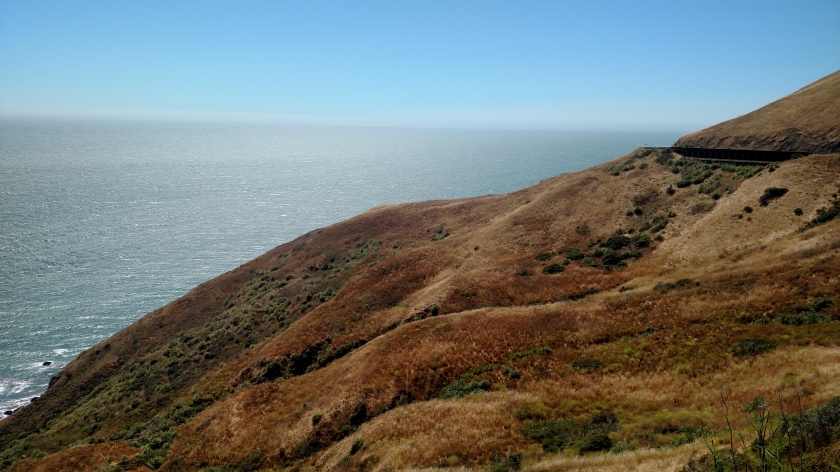 Tuesday I drove from where I had been staying in San Rafael, CA north to Ukiah, CA.  Much of the drive was along US Route 1 which, in many places, runs right along the coast.  Once I reached Route 1 in Point Reyes it was roughly 100 miles north to Manchester, where I had to turn and head inland towards Ukiah.  Here are some of the things I saw throughout the day: 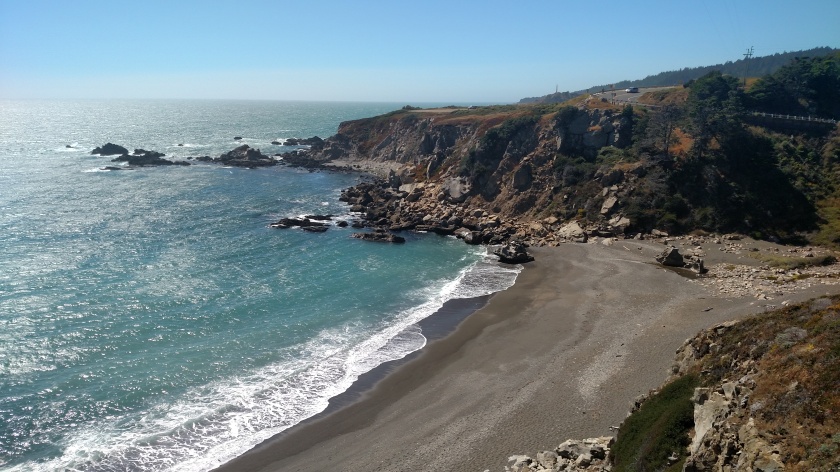 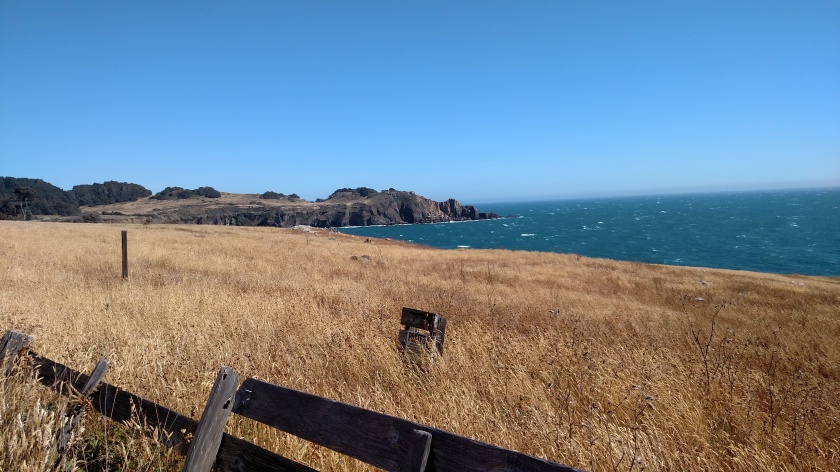 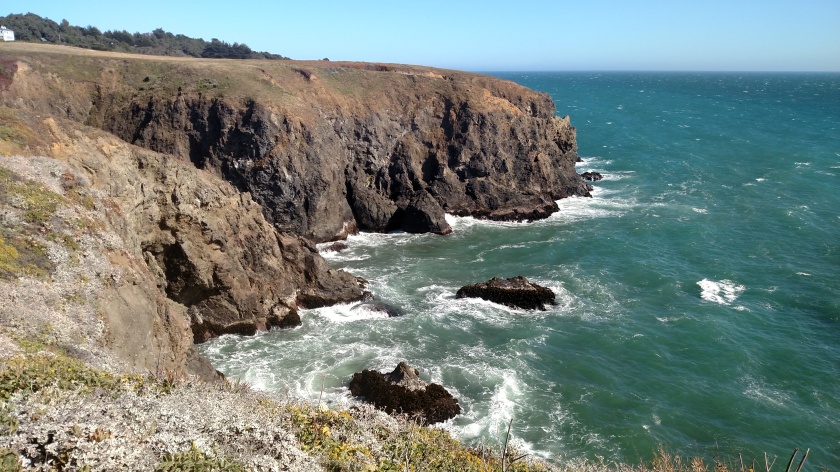 This is the Point Arena lighthouse.  It closed about an hour before I got there but I am hoping to get back there on Thursday to get a closer look. 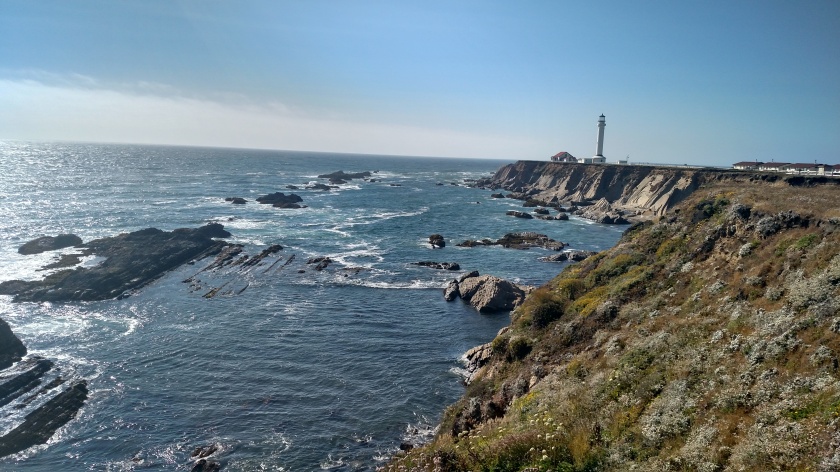