This complex is so big it is next to impossible to find a vantage point to get it all in one photo.  Here is a scale model of the main building (there are also buildings on the property at the fairgrounds, where the Marin County Fair just concluded with July 4th fireworks, and a nearby outdoor amphitheatre). 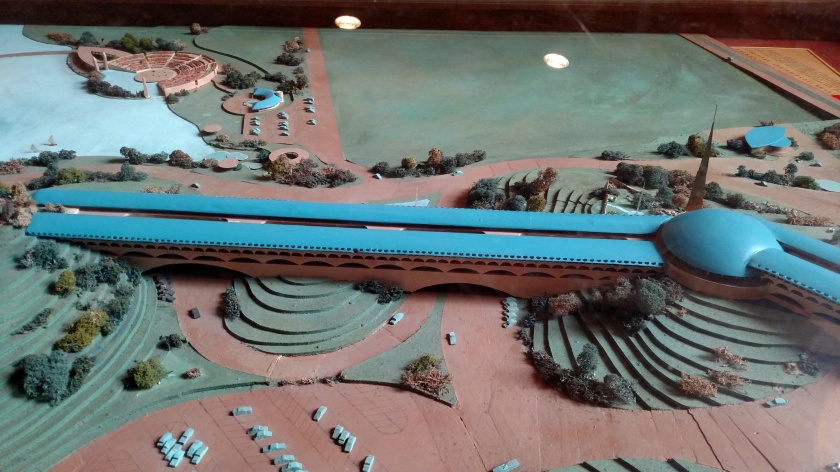 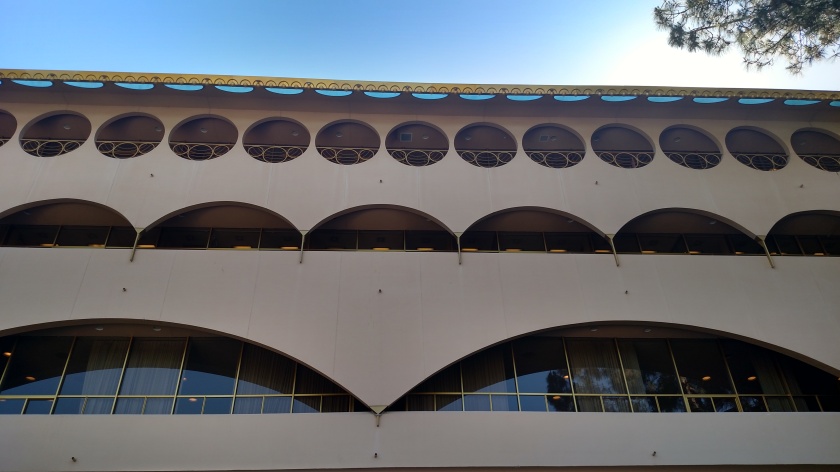 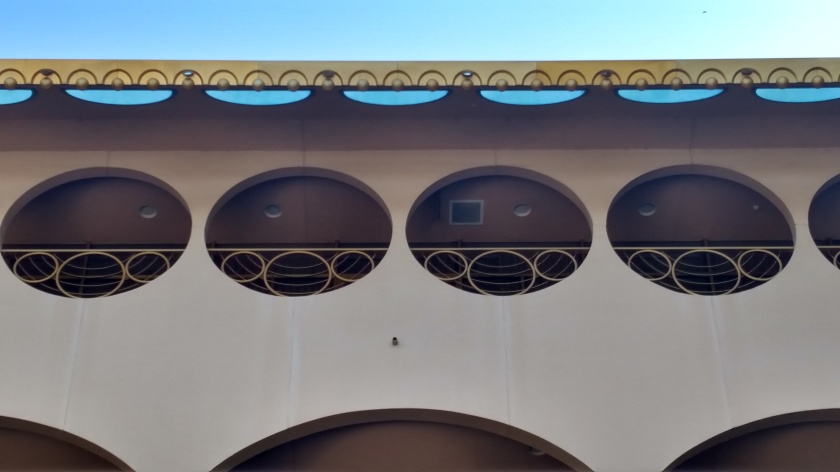 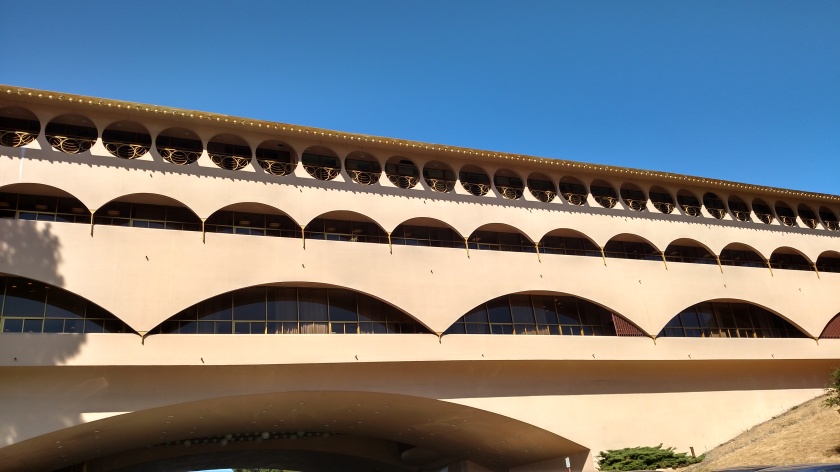 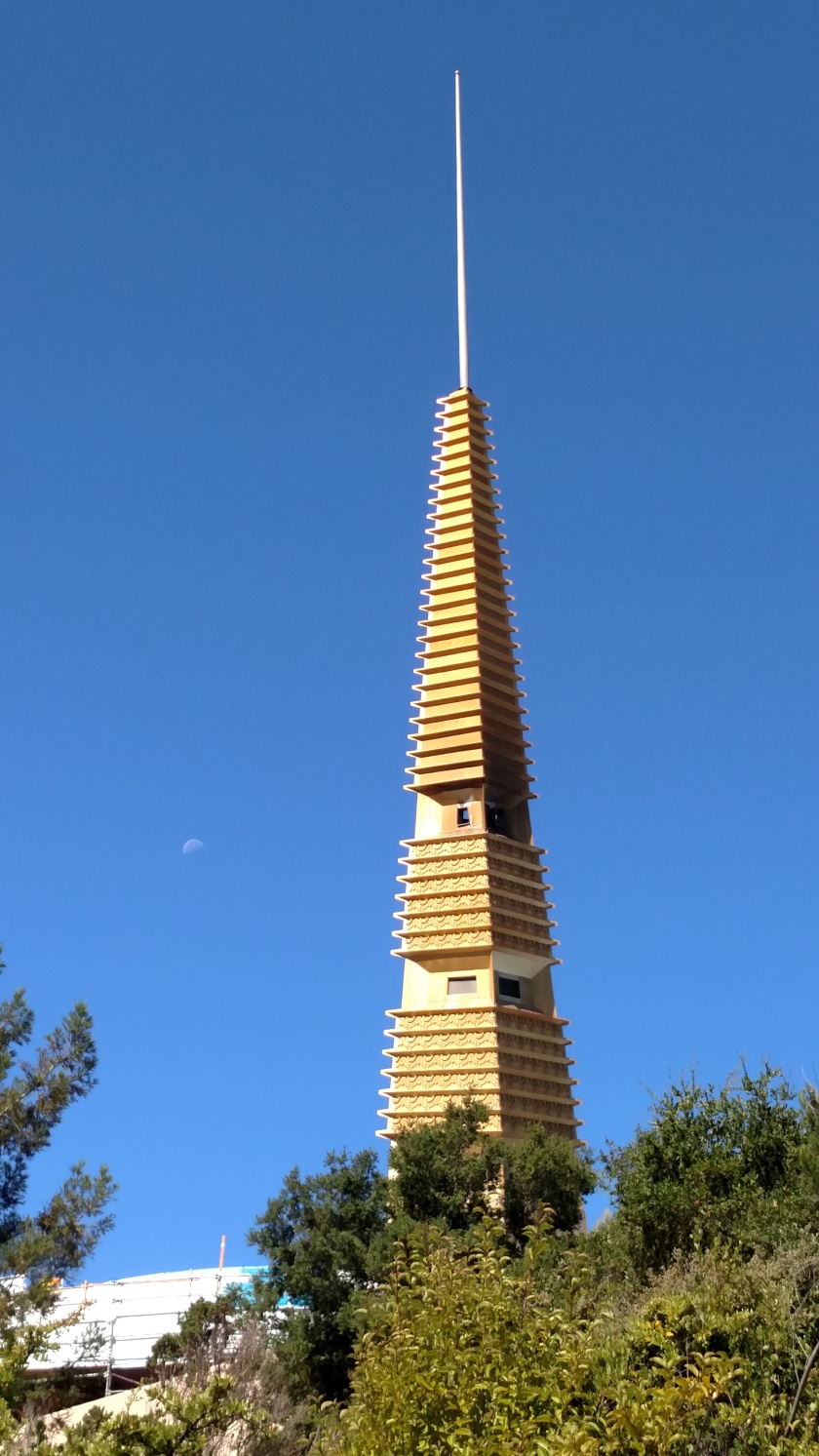 The original design called for the roof to be gold (to blend in with the local mountains and to conform with California’s motto as “The Golden State”) and the spire to be blue.  Those color choices were ultimately swapped, which I think turned out very well. 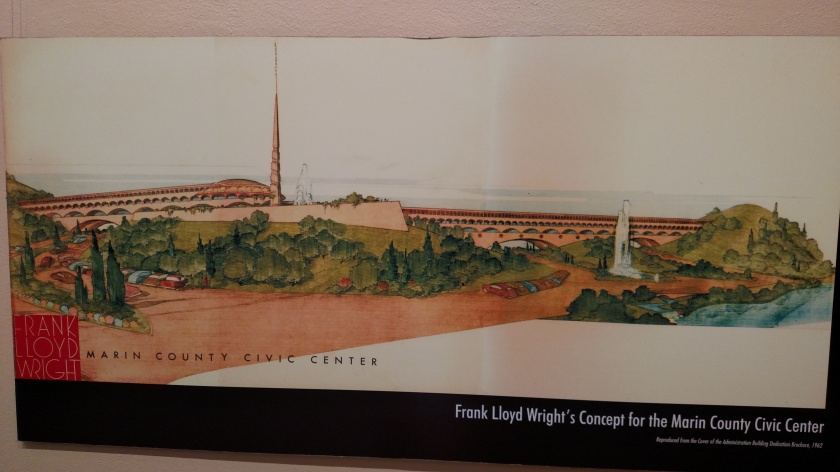 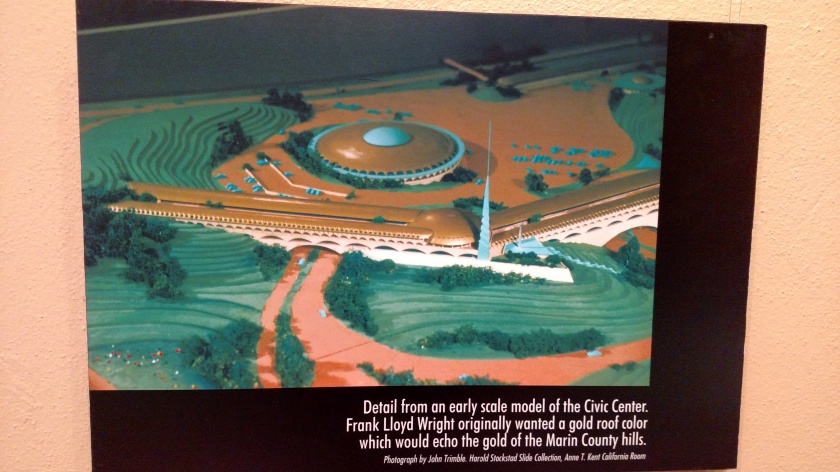 Inside the building the long corridors include atriums with plants and skylights: 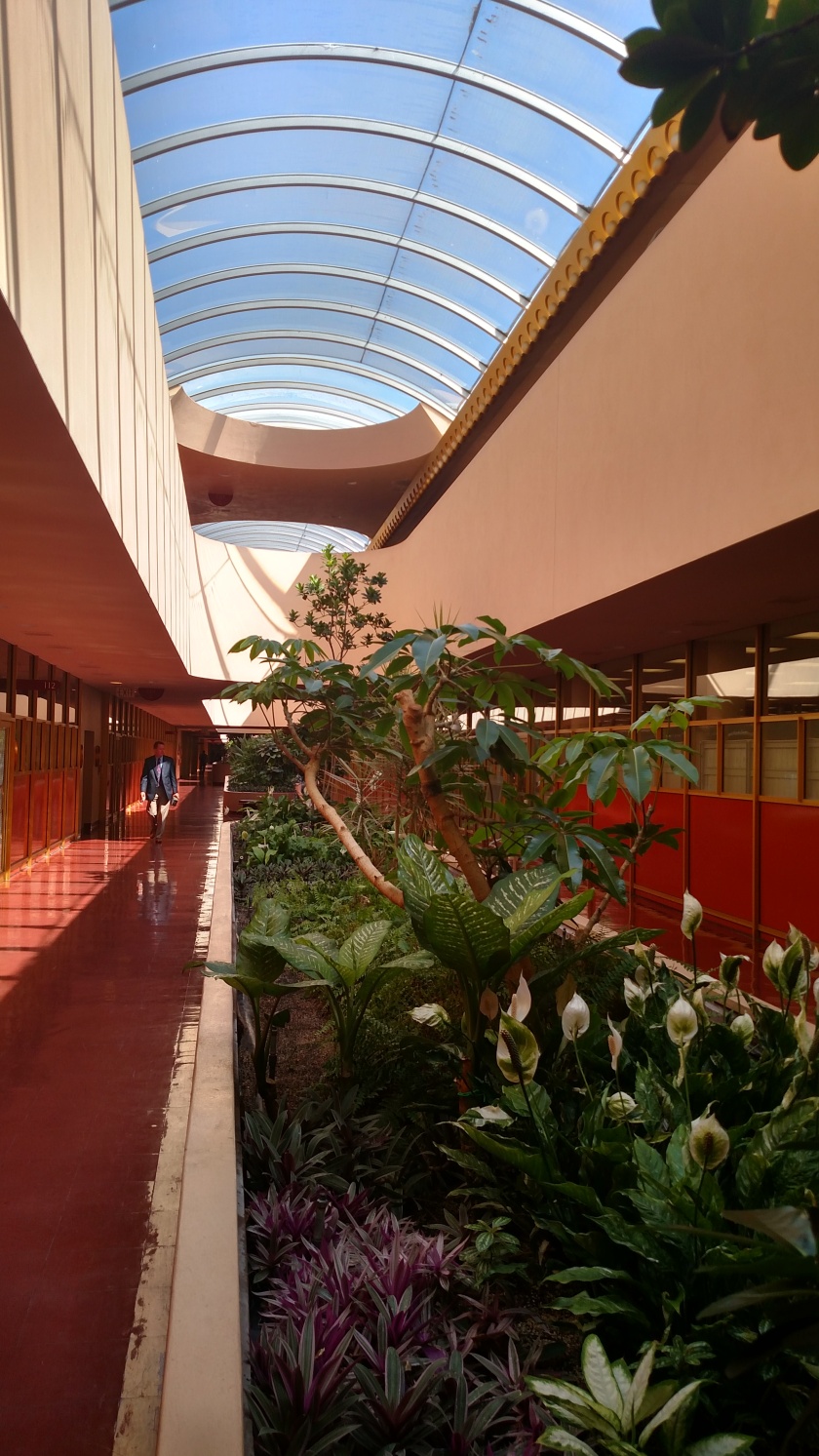 Workers were in the process of renovating the blue domed roof: 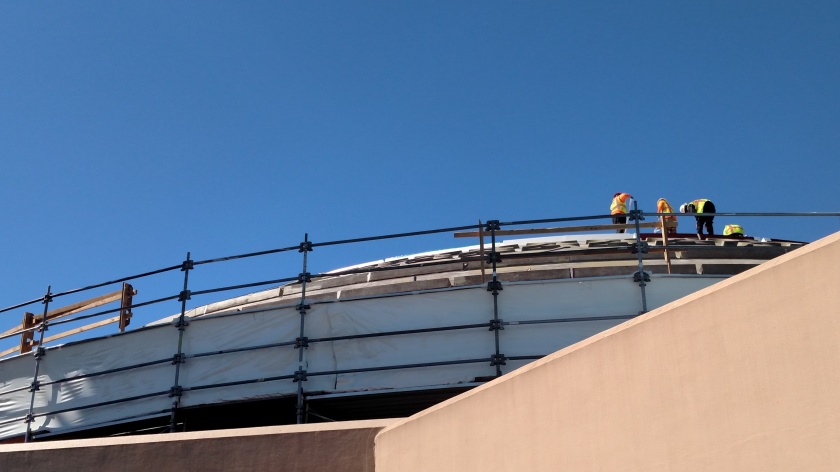 This is a fountain located outside the second floor cafeteria: 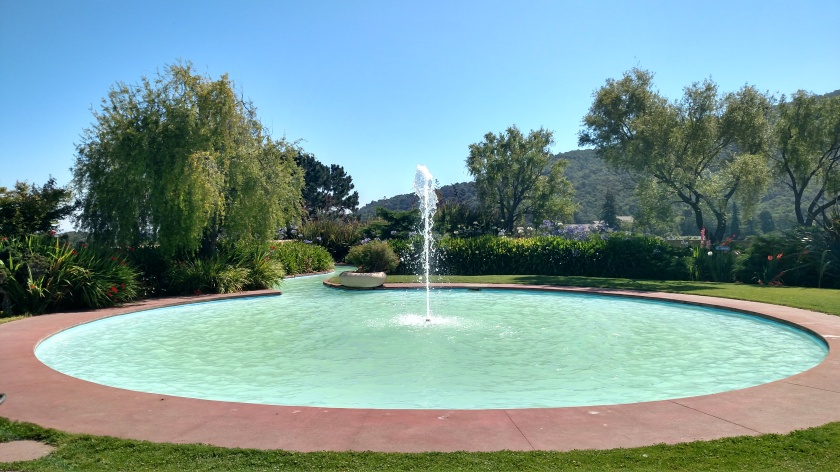 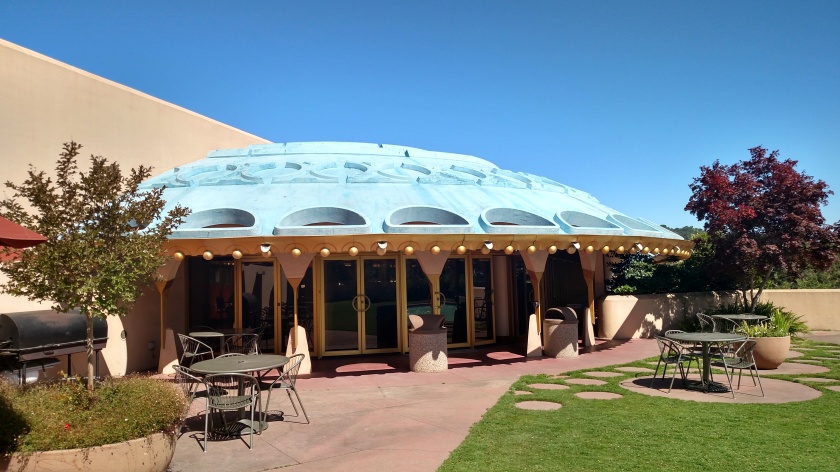 And a view looking out from the balcony: 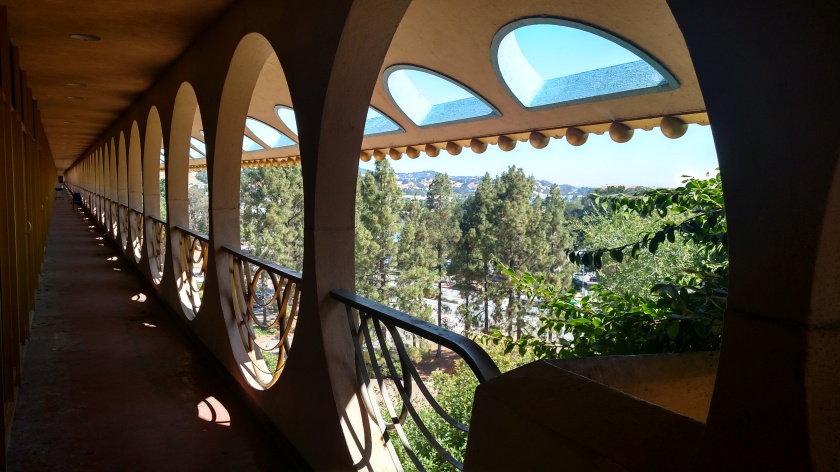 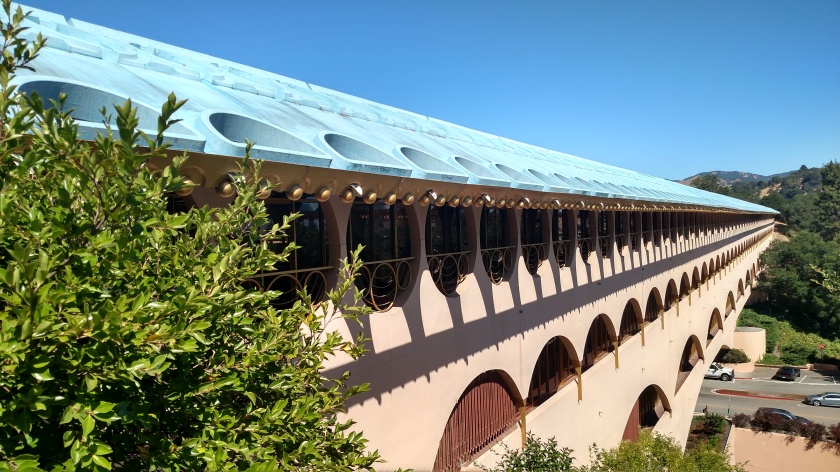 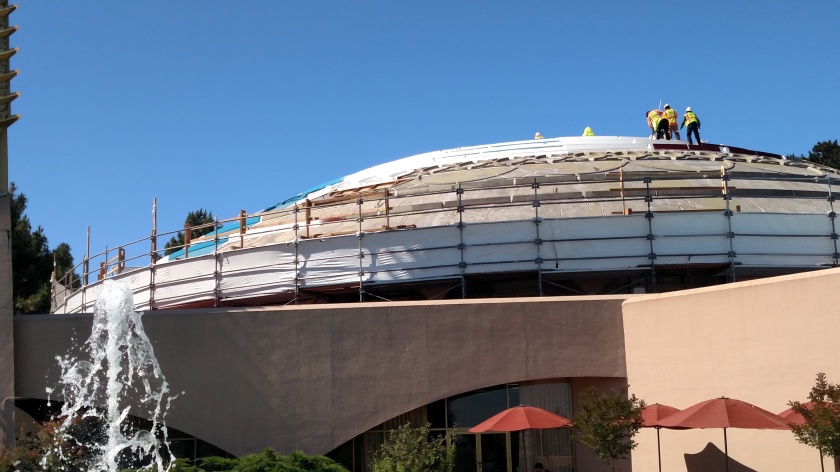 Mr. Wright also designed the Post Office located across the street from the Civic Center: 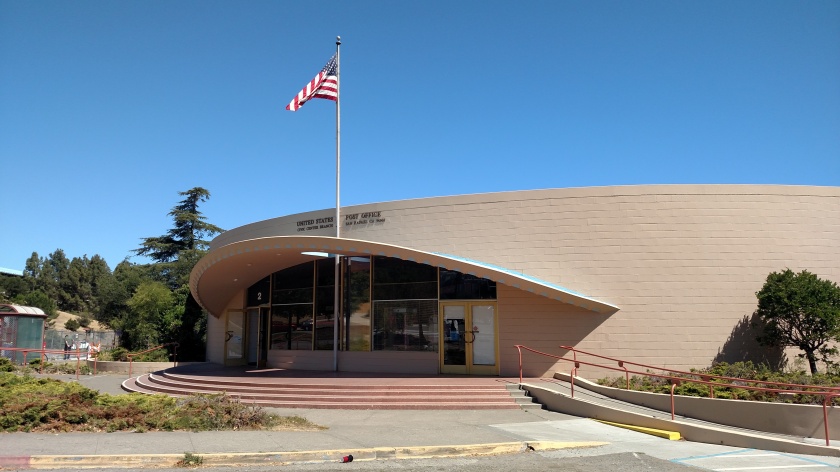 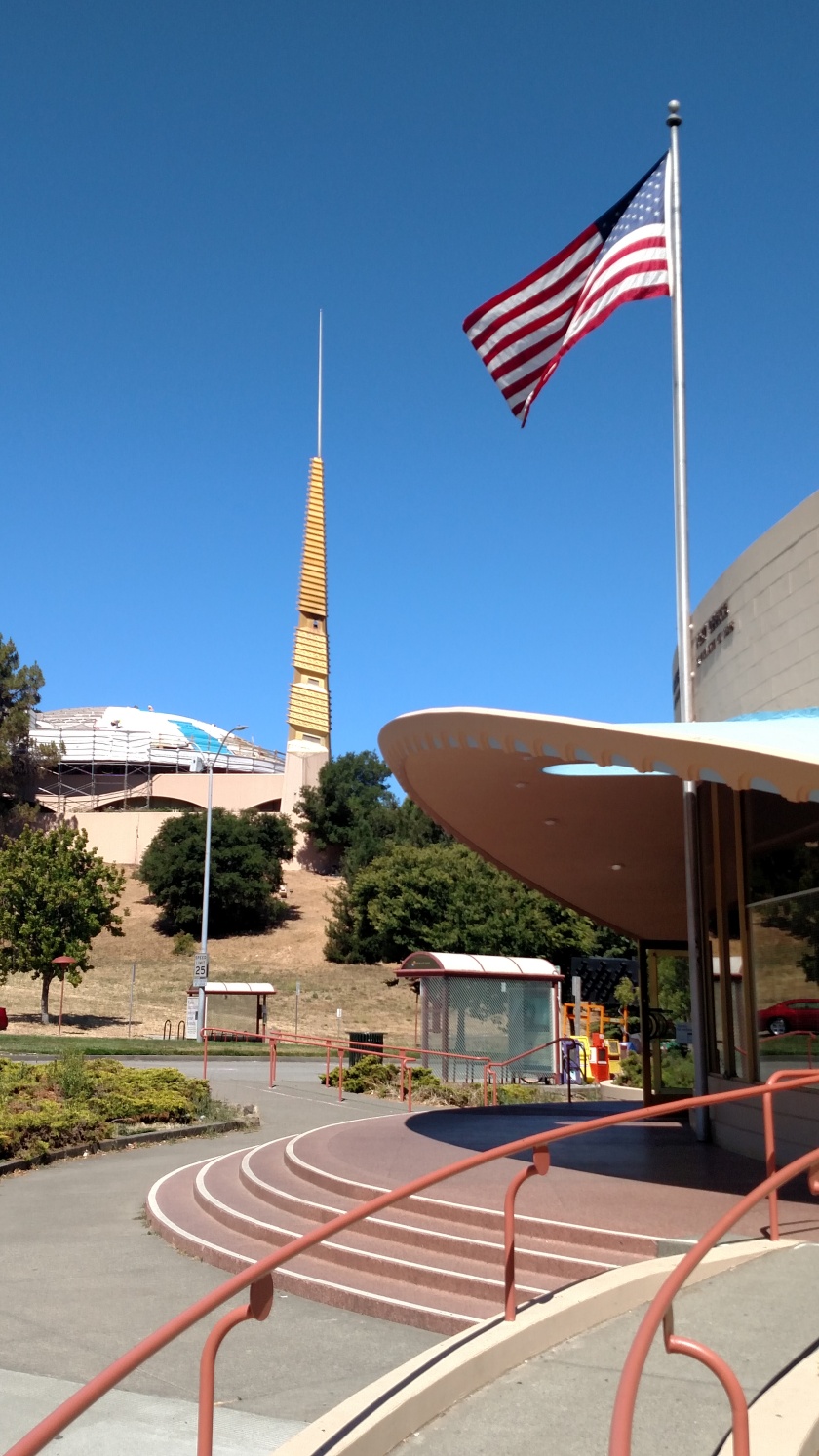 As some of you know from previous posts I am a fan of structures designed by renowned architect Frank Lloyd Wright and try to visit houses and buildings he designed during my travels.  Well, this may come as a surprise even to FLW fans but he once designed a doghouse!  I heard about this on NPR a few months ago and learned that it was designed for a family who lived in this area.

Mr. Wright designed a home for the Robert Berger family of nearby San Anselmo.  When the house was completed Mr. Berger relayed his 12-year-old son’s request that Wright design a doghouse which would fit in with the house design but would be inexpensive enough so his son could pay for it with money earned on his paper route.  Mr. Wright wrote back that he was too busy and that they should ask again a year later.  Well they did and this time Mr. Wright complied.

The design was completed in 1957 but construction wasn’t completed until 1963 (after selling many newspapers!).

Here is a photo of the original doghouse: 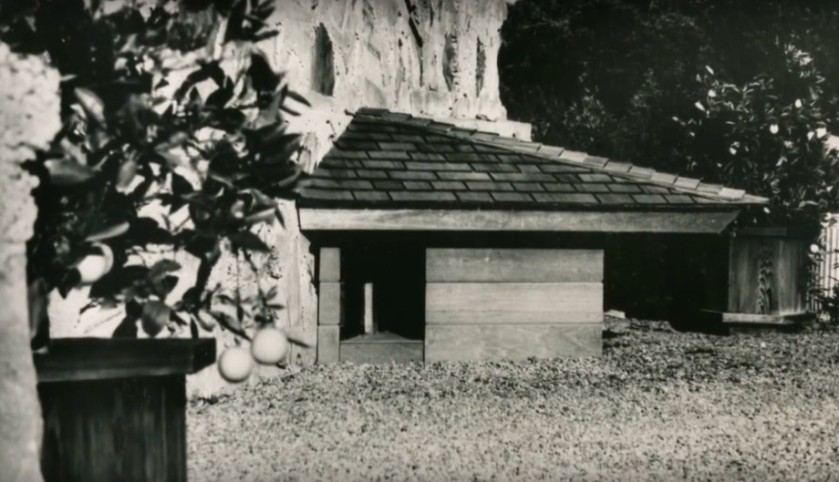 The doghouse was thrown out after it was no longer needed but was later reconstructed following the original plans (note that it is sitting up on a dolly so appears taller than it actually is): 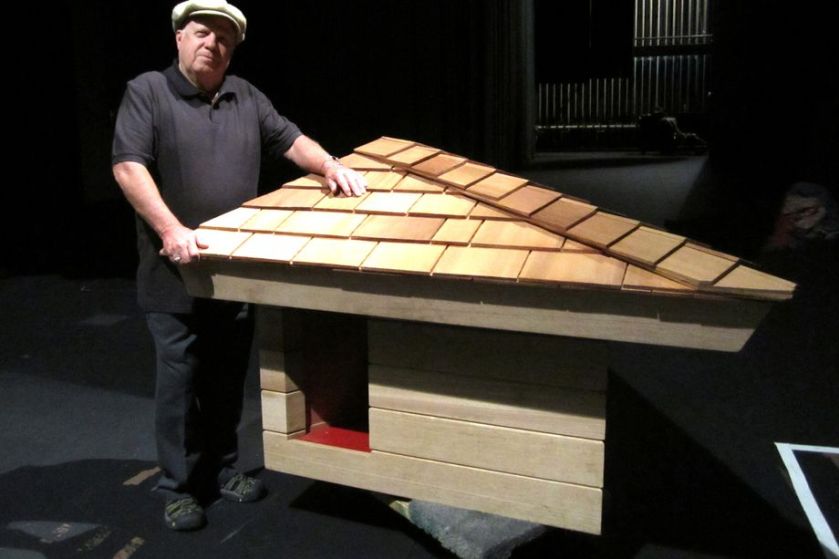 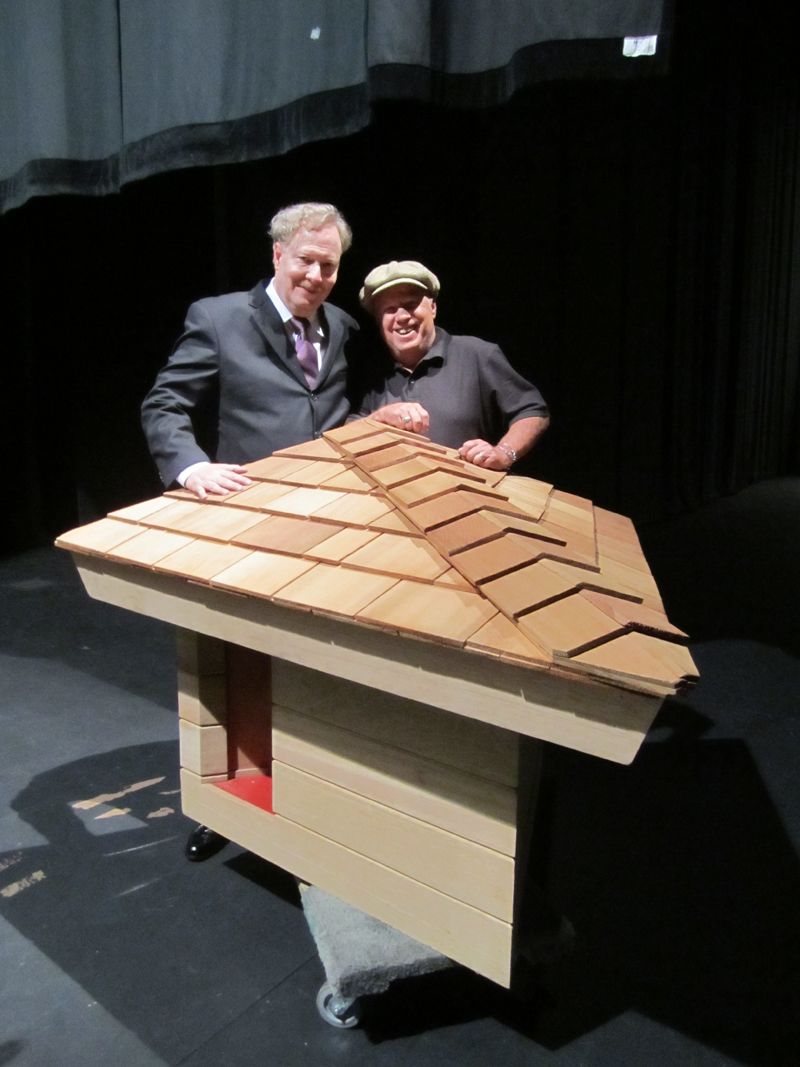 Wednesday was the 4th of July and I spent the day at the Airbnb where I am staying in San Rafael for the week.  By the way, the locals pronounce the name of their town San ra-FELL, not San raf-A-el as I have been saying.  My Airbnb hostess had a holiday cookout which included her boyfriend, parents, and about 10 of her neighbors and friends.  I made “Fire & Ice” salsa (watermelon + jalapenos as the main ingredients) which seemed to be popular and it was nice to spend a relaxing afternoon visiting with her friends and getting ideas on additional things to do both here and next week when I continue heading north along the coast.

Thursday morning I headed out to several destinations in the area.  Here are some of the things I saw:

I learned what “hatched” means as it pertains to streets and parking lots: 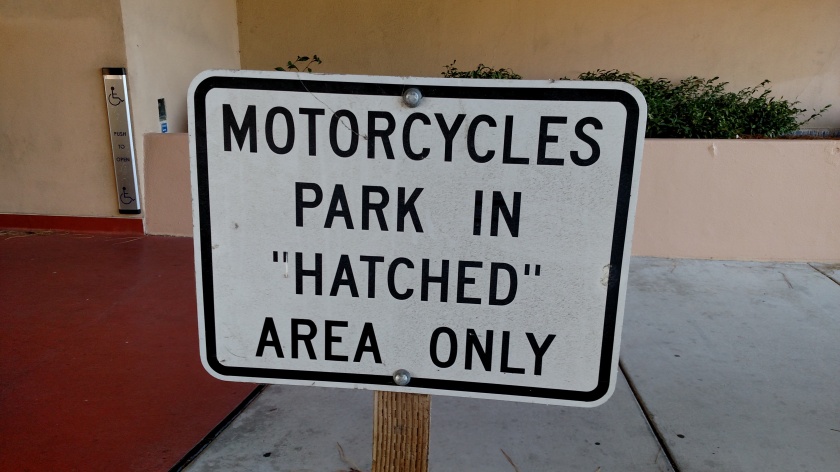 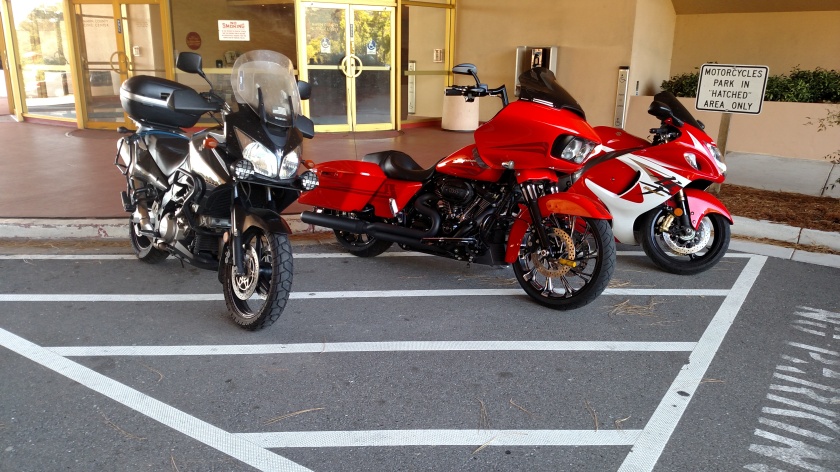 I also learned that the Marin County Jail is located mostly underground (what a neat idea!): 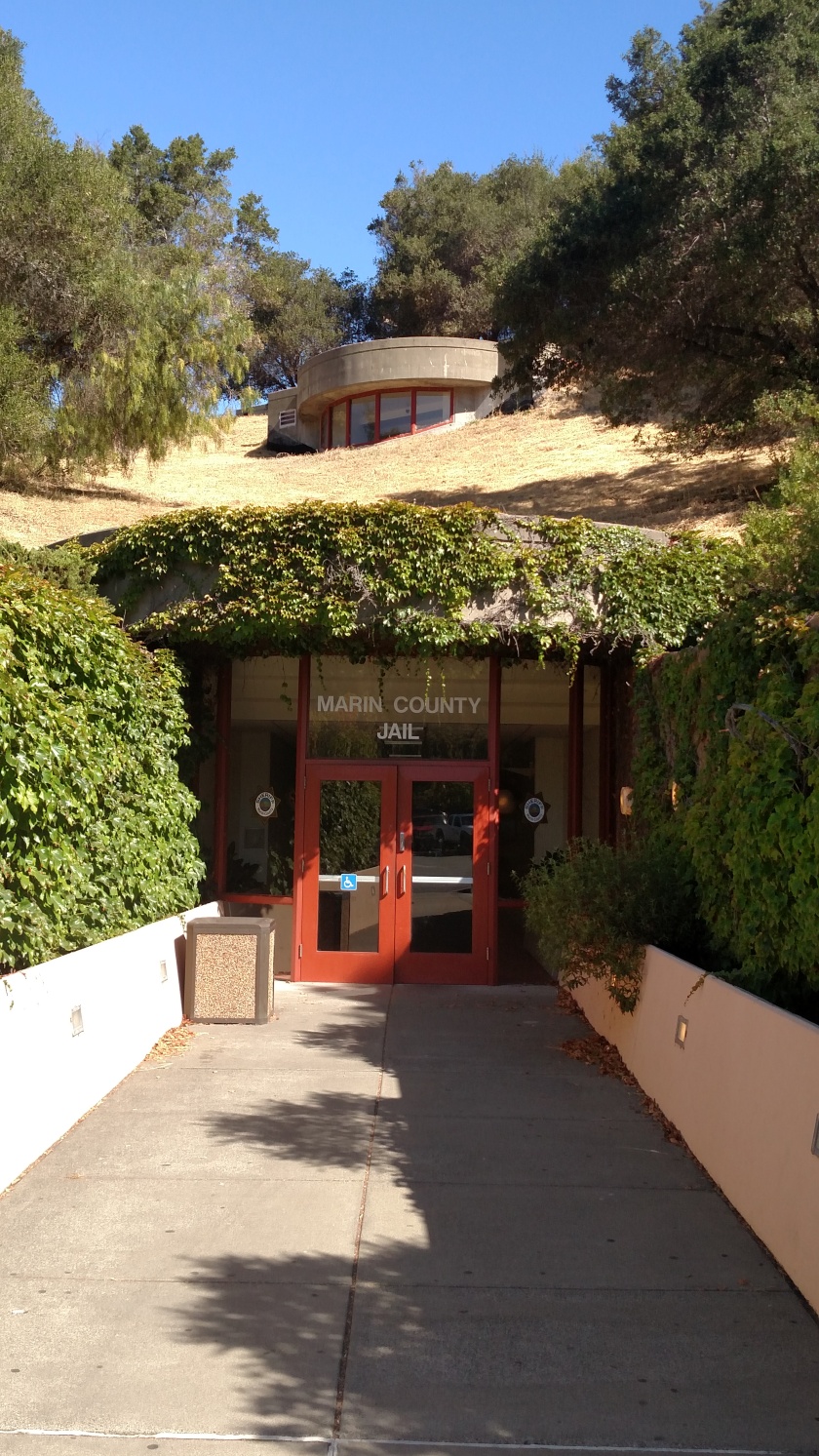 By the way, the county name is pronounced ma-RIN, not MARE-in.

I made a short visit to Mission San Rafael Arcangel, in what is now downtown San Rafael.  It is close to what is now a city street and it is very tall so it was tough to get a good photo of it.  The first one was taken (quickly) while standing in the center of a busy intersection, carefully timed to avoid moving vehicles! 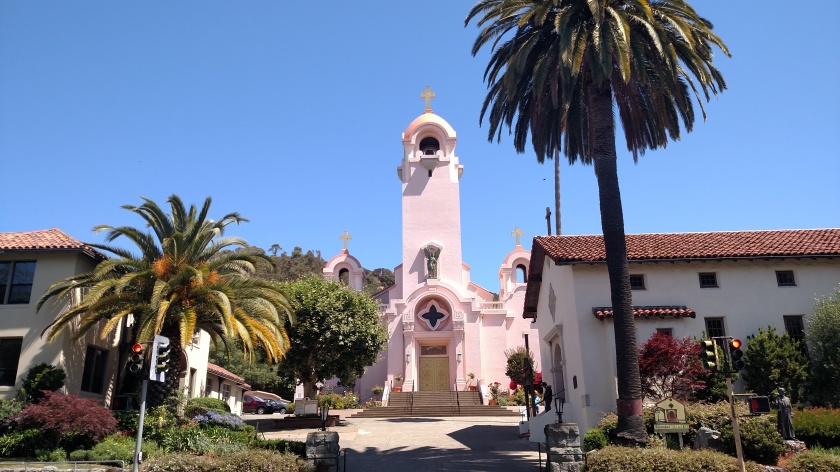 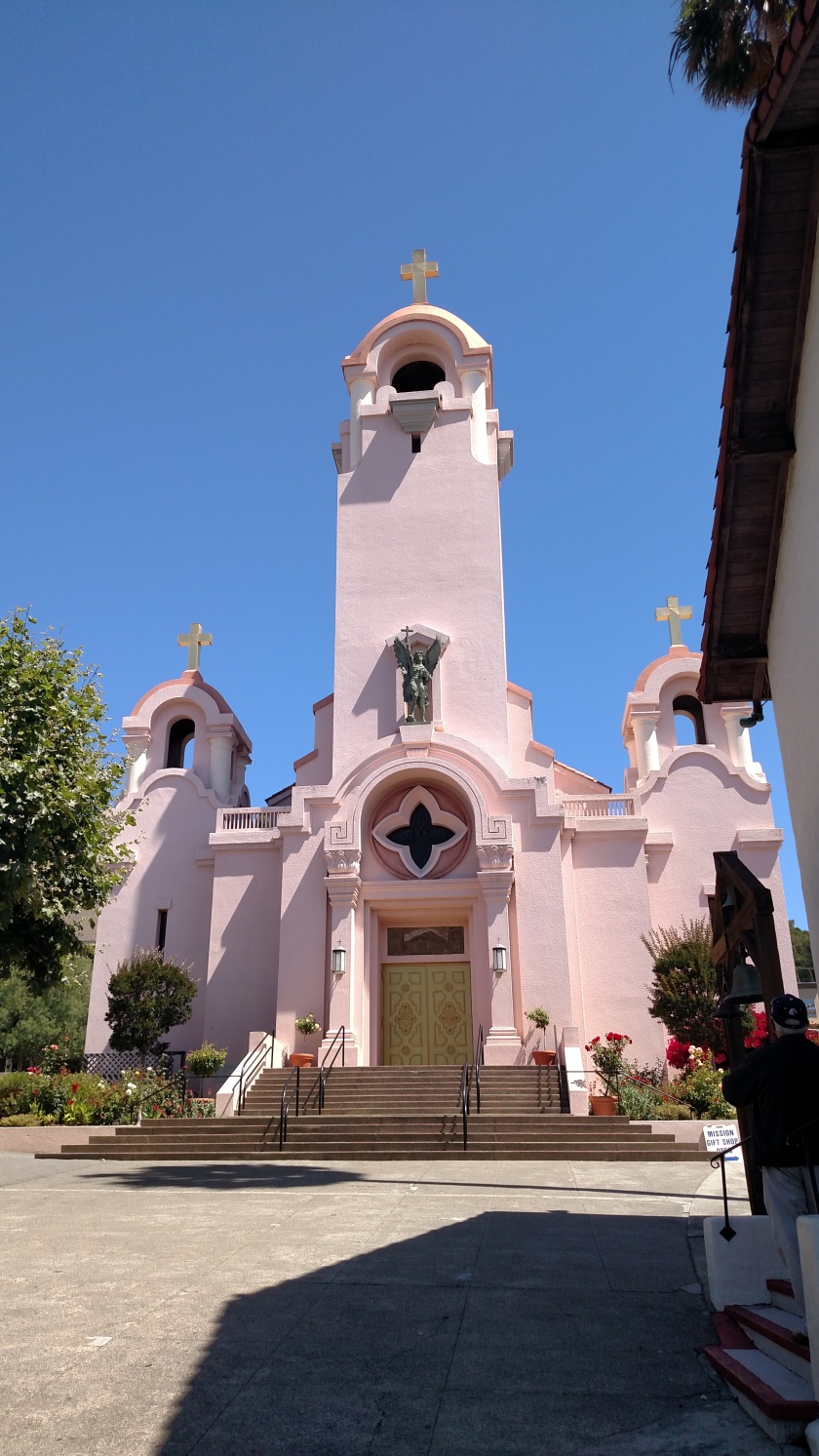 Here is a two-shot panorama – top to bottom: 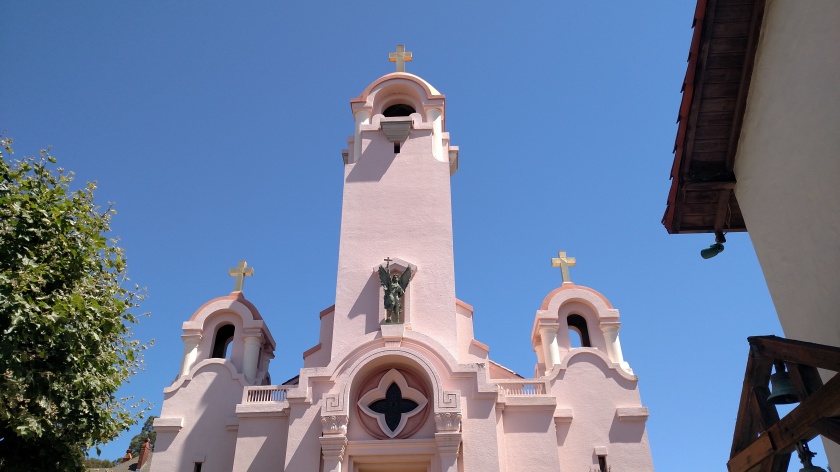 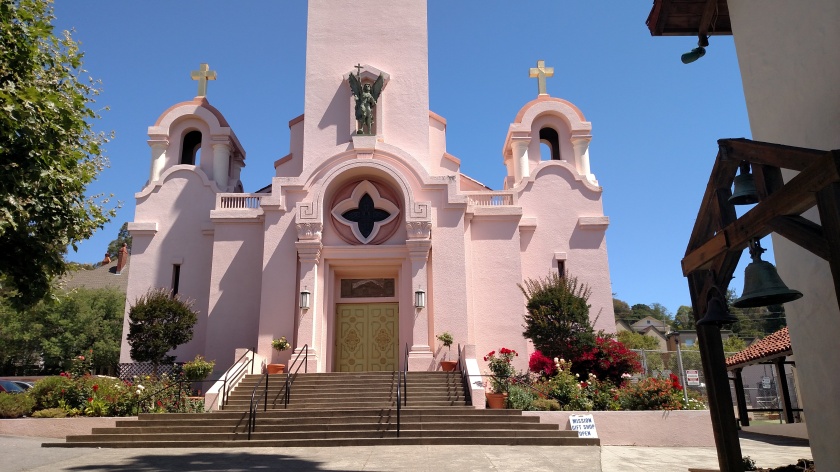 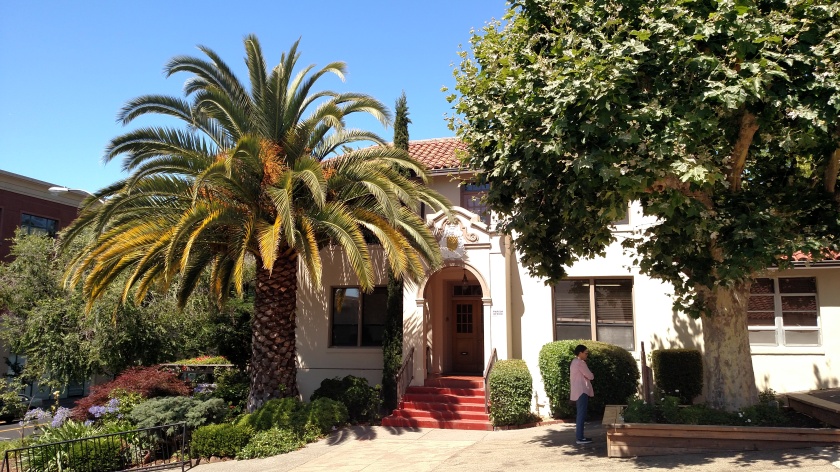 And these are some of the ferries which shuttle people to and from downtown San Francisco from Sausalito.  The “Mendocino” was just arriving: 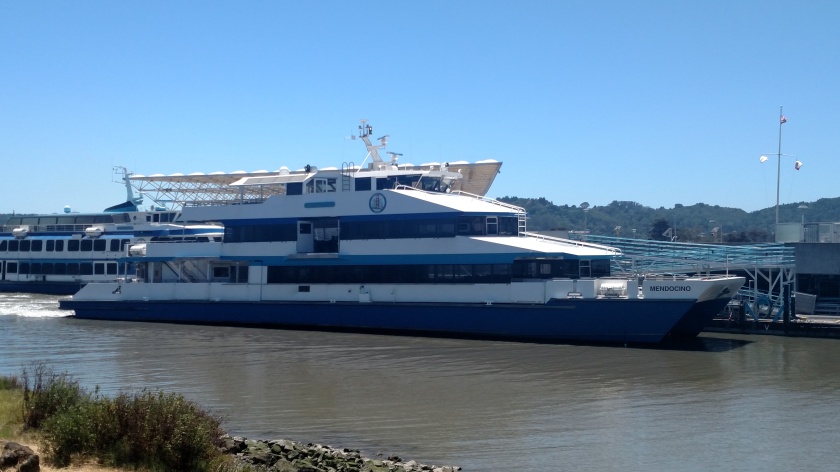 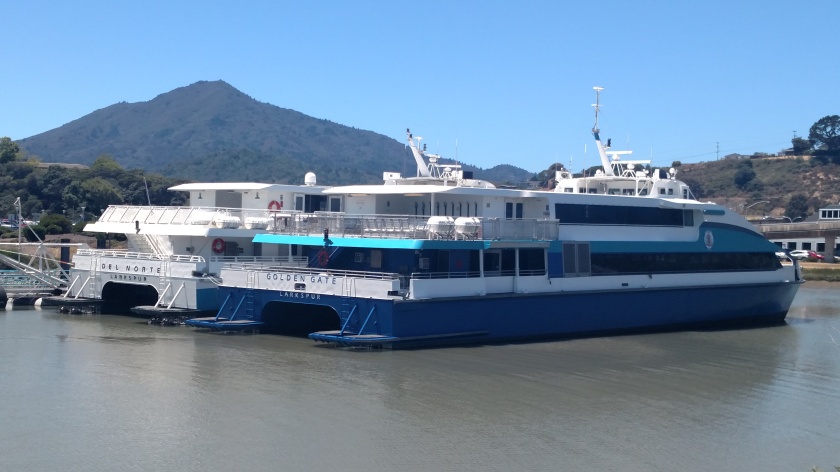 I will probably be riding one of these on Monday when I head over to San Francisco to visit the Museum of Modern Art.  I was also hoping to visit Alcatraz while I was in the area but unfortunately tours there are booked through the end of July.  I had no idea it would be such a popular destination.