Wednesday morning I drove back down to Trinidad, about an hour south of where I am now staying in Crescent City, California.  When reviewing the photos I took down there on Tuesday I realized I missed something important.

This is a replica of the old lighthouse which used to sit out at the end of Trinidad Head.

I had seen this when I was here on Tuesday (sitting down near the beach – between the photo I took looking right towards the beach and left towards the dock and Bay).  The building is a replica but the bell sitting in front of it is the real deal – a 4,000 pound bell which was kind of like a foghorn, warning ships at sea.  By the way, when I stood on the wooden planks under the bell the top of it (under the white concrete support) was right at my beltline.

We’ll get back to the lighthouse in a minute, but while I’m down by the water let me show you some other things.

This was a large group of kayakers returning to land:

As you can see, conditions by the water were foggy – as they were when I was here Tuesday.

Next – more boats being raised from and lowered to the ocean via a pulley system:

This one was on it’s way down:

This one was getting ready to be brought up about 5 minutes later:

And this one had come up a few minutes earlier but was being pressure washed to get potential aquatic “hitchhikers” off the hull.

As I learned last year, most states out West have an extensive network of boat inspection stations along highways coming in to their state and near rivers and lakes where boating occurs in an attempt to control and eliminate invasive species of plants and animals (mussels seems to be a particular concern this year) from being transported into a water source and contaminating it.

I thought I had more pictures of this pulley system but must confess I had gotten into a lengthy and enjoyable conversation with a fellow traveler while his wife was off entertaining their two young children (who had started making seagull noises non-stop) and was temporarily distracted from my picture-taking responsibilities.

After we went our separate ways I went back up to where the lighthouse replica used to be.  This was taken looking away from the water:

And by turning just a few degrees right (and keeping the metal staircase railing in view) this was the view: 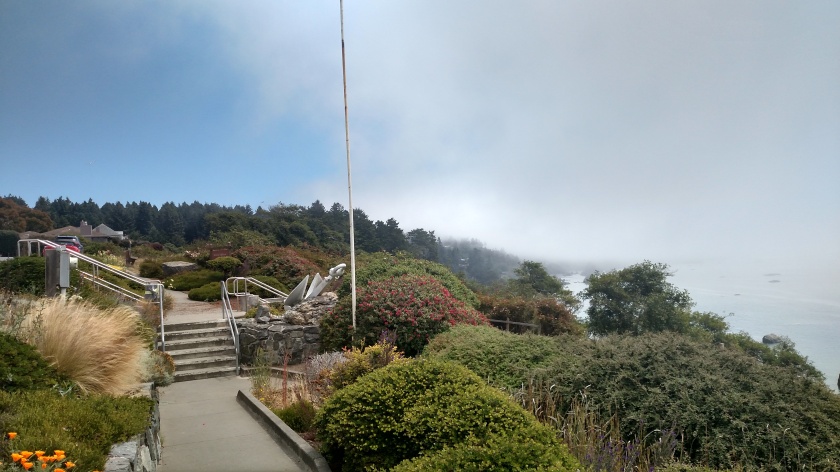 Another example of the marine layer just sitting off the coast but inland being sunny and clear.

Here is the view looking down those stairs to the right, towards the Bay: 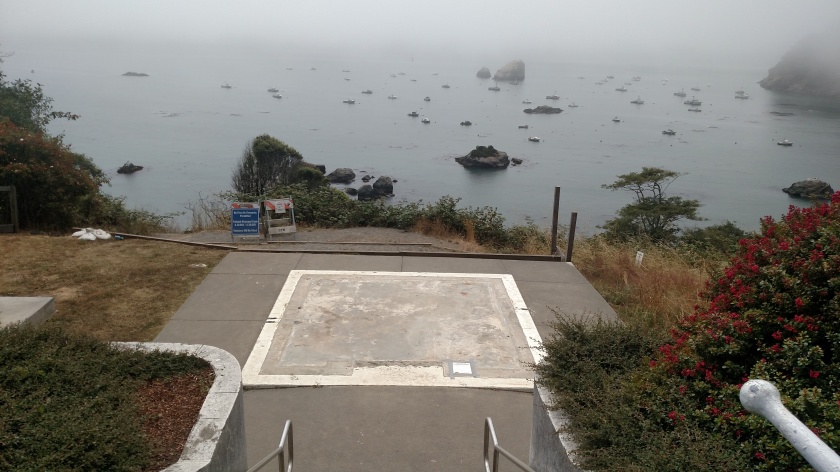 And on the wall left of that concrete slab is a memorial to people lost at sea.

The replica and bell was at this location for many years and apparently have been moved to reinforce the supporting platforms.

Here is a photo taken from the center of the platform where the lighthouse replica once stood:

It is virtually identical to a shot I posted from Tuesday, though I had taken a few steps forward to eliminate the two wooden posts.

Wednesday I learned that the old lighthouse has been replaced by a new, automated light source which is on the other side of Trinidad Head, a huge rock which juts out into the ocean between the dock and Bay to the left and the beach which was further to the right (north).  That was the location of the original lighthouse but it was damaged by the highest recorded wave to ever hit the California coast back in 1914.  The lighthouse was later automated and a more powerful light source was constructed.

One thought on “Trinidad Redux”