Thursday and Friday I spent the day in and around the large town of St. John’s in northeast Newfoundland. This is one of the posters currently being distributed by the Visitor’s Bureau promoting the town.

These are called Jellybean Houses because of their color and variety.  They actually call it Jellybean Row (because they are rowhouses) but that isn’t an actual place, just the concept.  These colorful houses are everywhere in the city of St. John’s.  I took lots of photos, and could have taken lots more, but I will try to only share the better ones. While the pictures on the posters are pristine and clear of vehicles and utility poles & wires, real life is a little messier.  I do have some relatively “clean” shots which I will post first, followed by more cluttered shots in another post. Many of the residents plant pretty flowers which often complement the color of the house and it is unfortunate that parked cars often block the view of them.  I guess we can’t all live in Disneyland…..

I tried to take photos of the houses on the sunny side of the street, though sometimes I took them of the shady side but at an angle so the sun wouldn’t distort the shot.  You will also notice that many buildings are level, whereas others are staggered in height, sometimes quite a bit.  The streets parallel to the waterfront in St. John’s increase in altitude very quickly and walking up or downhill is very steep, like being in San Francisco.

I waited in the shade across the street in front of this yellow house for a few minutes as a well dressed man methodically scraped at a sticker on the door using his fingernail. When it became apparent it was going to take a while I decided to go elsewhere and come back later. I walked to his side and commented “that looks tedious” not to be a wiseass but just to acknowledge his effort. He explained that he owns this house and just had a new front door unit installed, with glass side windows. He basically said “You’d think that for $ 4,000 they would have at least removed the barcode!”.

I did come back later and as you can see, remnants of the sticker are still there. 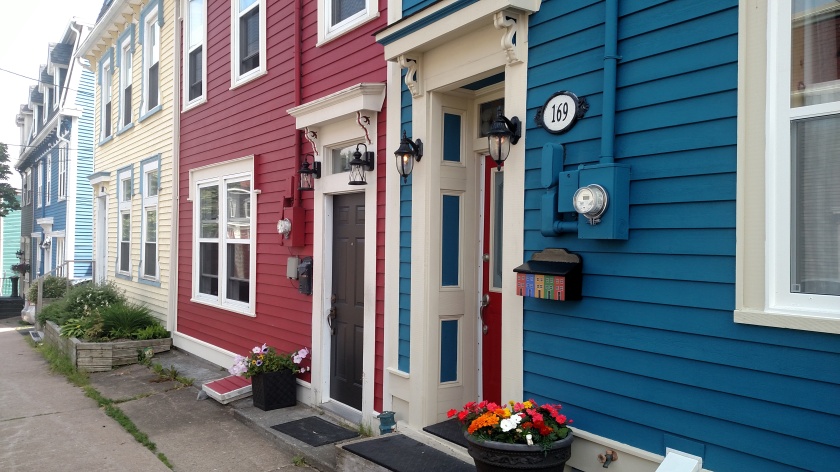 If you look closely at the blue house in the photo above you will see that even the mailboxes have multi-colored house designs on them.  This was what I was referring to in a post I made several days ago of an old building located in a fishing town with one of the sides painted to emulate the Jellybean Row concept.

I saw many other things in St. John’s which I will address in other posts.