Thursday, while driving on some of my “primary” scenic roads on Prince Edward Island, I visited the town of Cavendish, on the northwest coast.  There I found the house which inspired the children’s classic (insert title of post here…) written by Lucy Maud Montgomery is 1908.  Parents of young girls from all over the world bring them here to visit (and I’m sure many adults who enjoyed the book as a child come here as well).  I came here at the request of a friend in Durham (an adult) who badly wanted a photo of the house.  She was ecstatic that I made it here when texted her a photo yesterday afternoon.

And this is Anne:

No, really, that is Anne.  At least that’s what she told me.

Inside the Visitor Center is an area where young girls (and maybe even older girls or adults) can don a red wig with pigtails, a period dress and straw hat and have their photo taken in front of backdrop while holding a sign which says “Green Gables”.  The backdrop isn’t even a painting or enlarged photo of the house, just some artistic scene.  I thought that whole thing was kind of lame considering what their parents had to pay to get them here and get them in to see the house.

So Anne is another photo op and a chance for these little girls to me misled thinking they really met Anne of Green Gables.  I took a photo of one such young girl having their photo taken by her parents and when the girl had removed all the props I asked the parents if it was ok to post the photo on the blog.  They said they preferred not, which I fully understand and is the reason I always ask.  I had a similar situation in a big National Park in the western US and, again, was told no.

So anyway, I see “Anne” (wink, wink) chatting and posing with some young girls near the back of the house and when the visitors moved away and their daughter was out of earshot I said “So you work here?” leading up to the question as to whether or not I could post her photo on the blog.  She replied, in a perky, whimsical voice – “No, I’m Anne…. I live here” and employed the sweeping hand motion I’m sure she has had plenty of practice doing.  Bless her heart, she’ll probably grow up to have psychological issues.  At least the people in the Mickey Mouse costume at Disney World get to wear a mask.

Oops – perhaps I should have warned “Spoiler Alert”…..

This property, while technically not a National Park, is a Canadian Historic Site and, as such, is managed by Parks Canada.  Sounds like a great spot for the “red chairs” and sure enough, I found them tucked away behind a row of hedges near the front yard of the house. 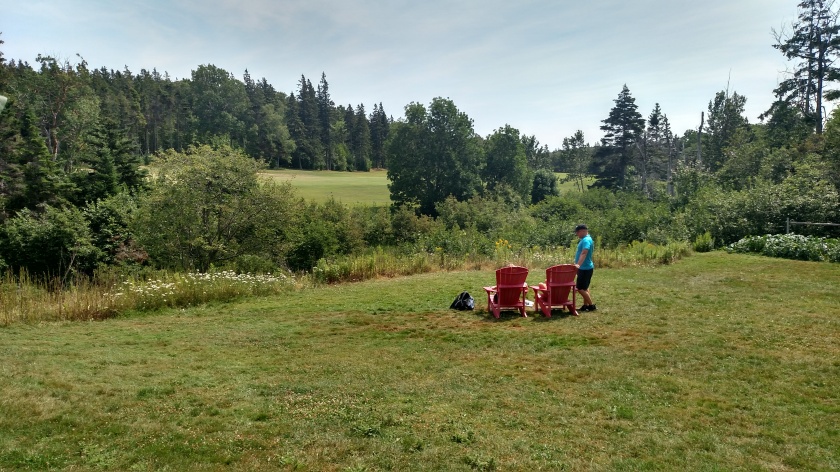 Here is the view the two young ladies seated in the chairs were enjoying:

The open field in the distance is now one of the fairways of a golf course.  Somehow I doubt that was in the book.

Seeing as the site was managed by Parks Canada my Discovery Park Pass got me in for free, which was a relief for two reasons.  One, I didn’t have to pay, of course, but more importantly two, I didn’t have to wait in the loooooong line of parents waiting to bring their little girls in.