Off topic, I know, but this is a hoot.

When I travel I generally monitor a Raleigh TV station’s website every night just to keep tabs on what’s going on back where I live (Durham is only about a half hour from Raleigh and although we have our own TV station, thank you very much, I prefer this one in Raleigh).

I found this article, which I post unedited, and accompanying photo on WRAL.com.  They do not credit the news service (Associated Press, CNN, etc) they got it from so I can’t either:

BURIEN, Wash. — A Washington state trooper who pulled over to help what he thought was a disabled vehicle found something else instead: The driver had eight phones simultaneously playing the video game Pokémon Go.

The driver was stopped on the shoulder of Highway 518 in Burien, south of Seattle, on Tuesday evening.

The agency tweeted a photo showing a blue foam square, with the phones sitting in eight rectangular cutouts.

Trooper Rick Johnson is a spokesman for the patrol and said Sgt. Kyle Smith did not issue a ticket because he did not observe the car moving while the driver was using the phones.

But Smith asked the driver to put the phones in the back seat and move along, because stopping on the shoulder is for emergencies only.

And I worry about stopping on a busy highway in my SafetySam vest just to take a “hit run” shot of a great photo op!

And since I’m going off topic, I have a time-sensitive RFI (or RFS, as it were…)

I bought two candy bars the other day, one because it was recommended in my pre-trip research and the second because it sounded good (and was). 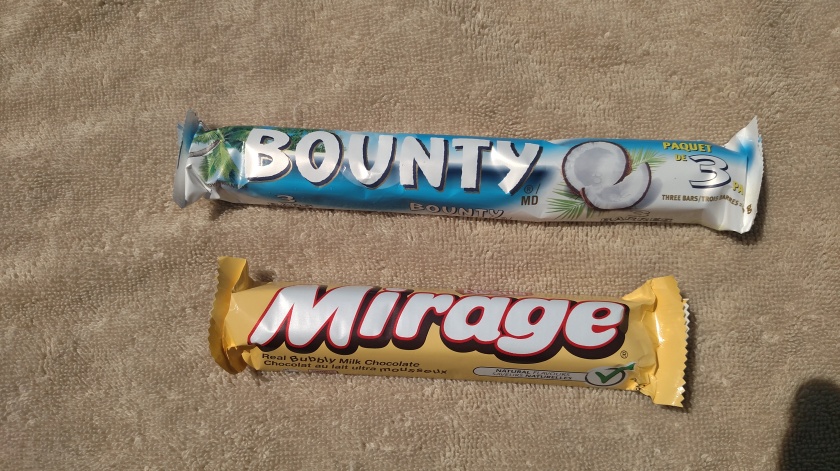 I took that photo with the candy bars on a towel placed on the hood of my car while in line waiting for a ferry.  The people in the car waiting behind me, undoubtedly QP people but I didn’t check, probably thought I was some kind of nutjob.  Hey, “sometimes you feel like a nut, sometimes you don’t”, which ironically applies somewhat to the Bounty bar.

Mirage, made by Nestlé, promises “Real Bubbly Milk Chocolate” (and special characters or not, I can’t make the letters in Bubbly dance like they do on the label.  If you look closely below the ‘M’ you may be able to see it…)

It wasn’t terrible but I don’t like to pay extra for air bubbles in my food unless it’s a beignet.

The Bounty bar, on the other hand (or in the other hand as I ate them at the same time – That’s a LIE Mr. Trump!!!) was made by a company not known to me but was like an Almond Joy without the almonds.  Not a Mounds, mind you, which is dark chocolate and one of JohnBoy’s favorites, but coconut covered with milk chocolate.  It was yummy.

I don’t always eat candy, but when I do….   to paraphrase the MIMITW who, regrettably,  isn’t used in ads any more.

Anyway – the people in the car behind me can think anything they like (zee crazy American, and look at zee crazy license plate…) as I was doing important blog stuff.

So my request (I almost forgot!) – any other suggestions for candy or other things I should try while I’m in Canada?  I’ve already had lobster rolls and poutine.  Don’t think about it too long….I’m only here for another 10 days.  If you have any, please post them as a Comment (left side of your screen at the beginning of each post) or share them with me privately via the “Contact” link on the Homepage.