I have been incredibly impressed as I have driven around Eastern Canada with the number of classic cars from the 60’s and 70’s I have seen in everyday use. Some appear to have been just well maintained and original but some may have been restored. Regardless, I always feel like I’ve found treasure when I see one “in the wild”. Sure, car shows are fun but that’s like going to a zoo. It’s more challenging to just stumble upon “free range” Mustangs and Barracudas.

Long ago I decided not to stop and photograph them (they are often on private property) but merely enjoy my fleeting glimpse. I see them very randomly in the US but have seen an inordinate number over the past 7 weeks. I only started photographing them about 2 weeks ago when I decided to make this post (and have seen more than just these).

The first was parked at a Tim Hortons where I had stopped to use their wifi and washroom. I saw it when I arrived but didn’t prepare to take the pictures until I had done my business and was ready to leave. As I was getting in position the owners walked up and fortunately, unlike the mime with the goofy little car in New Brunswick, were more than willing to let me take my pictures. They were just out for a drive, and have used this vehicle to travel the entire length Route 66 in the US in the past.

We had a brief conversation about Route 66, which I have considered driving myself (and have done small portions of already). I asked their opinion of it, as my experience had been that the luster has worn off somewhat and it is sometimes reduced to being just a service road parallel to a modern interstate highway. They said they thoroughly enjoyed it and that the trick is to get a book, which I will order on Amazon when I get home, showing the nooks and crannies which still breath life, and have maps to find the more obscure parts (it is not very well marked and I have gotten lost more than once trying to follow it).

This car was parked along the street in Québec City one day as I was making my early morning walk to the pastry shop:

We used to joyride in a car like this when I was in high school. My friend Mike Harvey would “borrow” it when his mother was sleeping. He would always put gas in it when we were done with our little drive so she wouldn’t know, but I’m sure she did (and he probably used her money!).

This one was parking in a private (for residents but publicly accessible) parking area near the Château Frontenac hotel in Québec City. 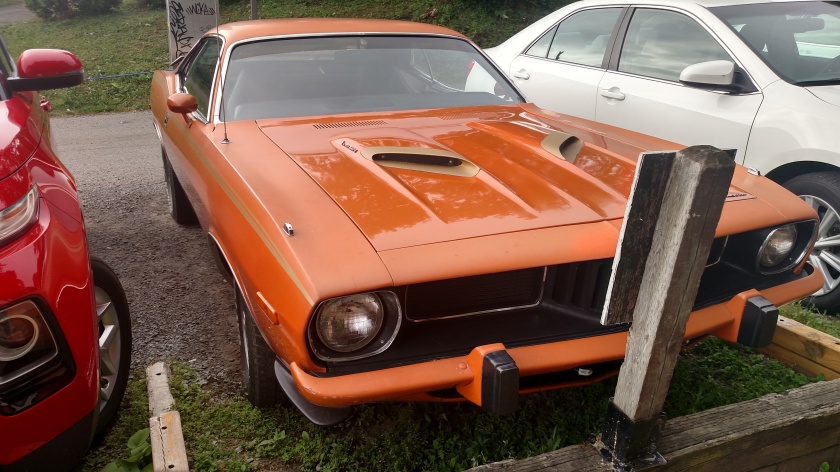 I friend of mine from high school had a similar car, not quite as souped-up, several years after we graduated and when he was gainfully employed.

And finally, just a few days ago after my boat ride through the Thousand Islands, I came upon this beauty outside a car repair shop as I was driving towards Toronto.

I’m still kicking myself for not taking pictures of another gorgeous Thunderbird I saw on my way to Ottawa. It was like the one the CIA agents were driving in Goldfinger when they were tailing James Bond.

I was fascinated by cars when I was a kid. I was born in suburban Chicago and lived the first 12 years of my life there. Since I was about 8 by Dad would take me down to McCormick Place in the Loop (downtown Chicago) to the annual car show each spring. I would gather brochures and make little scrapbooks, which have sadly been discarded (as was my large Matchbox car collection which some of my cousins and I would play with out in the dirt and grass under a large tree at my grandparent’s house in West Virginia, then methodically clean with Q-tips).

Back in the early 60’s new models had “reveal dates,” usually in September, and were transported to dealers under car covers. I had a little Brownie camera which took black & white photos and I would sit near a busy street in Evanston (the first suburb north of Chicago, where we lived) waiting to capture new models when they drove by.

I am particularly fond of cars from the 60’s and 70’s and, when I can’t get back to sleep in the middle of the night, sometimes scan Tumblr accounts and other websites for pictures of cars I liked or remember seeing and save them to an ever-growing folder on my laptop. Seeing these cars out and about in everyday use brings back lots of memories.