My first full day in Ottawa, at the advice of my Airbnb hosts, I left early and drove downtown to a parking garage they recommended. “Early Bird” parking (in before 930am) was only $18, they said, and I wanted to beat rush hour traffic. Lucky for me parking has been reduced to a mere $10 (woo-hoo!).

The parking deck was very close to a Farmer’s Market type place (indoors and outdoors) where vendors sell all kinds of things – food (fresh fruits and vegetables as well as prepared food), novelty food, crafts & souvenirs, etc. I milled around there taking photos for well over an hour, some of which I will post eventually. I studied the map I picked up at the Visitors Information kiosk in the Market and started to organize my day. First stop, the Parliament Building.

As I started walking that direction I saw the name OTTAWA spelled out in huge letters so of course I took a picture:

Don’t be misled by the wet pavement. It had rained overnight but the sky was already starting to clear and it became a magnificent day.

Shortly after I was done taking my photos a family of 5 came over and the parents told their three teenage kids to get in position so their Dad could take their picture. Daughter 1 chose the big O, their son Sam chose the fourth letter (the first A) and I believe the other daughter selected the W.

Well then Mom starts yelling “Sam, stick your head through the A hole….”. Apparently Dad couldn’t see him in the camera viewfinder.

Sam seemed to be reluctant or uncooperative.

By about the third time she’s emphasizing each word: “Sam! Stick.. your.. head.. through.. the.. A.. hole….” she yells, slowly, like Brad Pitt in Fight Club.

She repeated this several times until Sam, not a small individual, finally got his head far enough into the A so that Dad could see him and take the shot.

But that’s not all – then Dad speaks up and says “Sam, stand between the two T’s and pretend that you’re Hercules holding them up”.

And of course Sam the trained circus monkey dutifully complied. 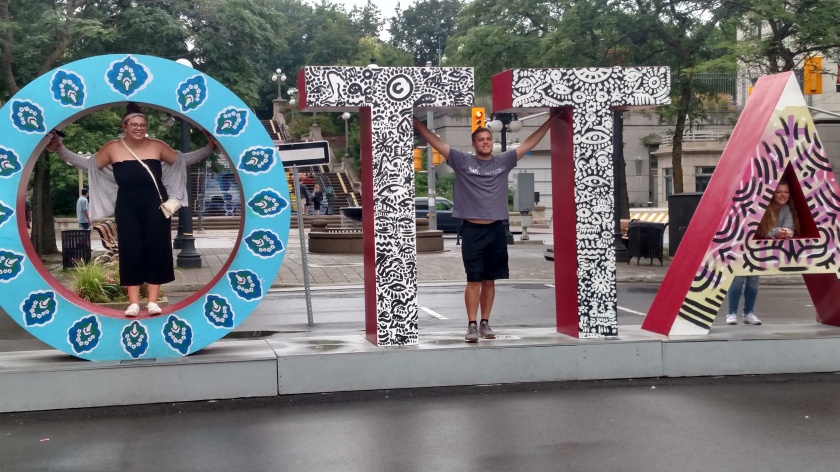 I’m surprised they didn’t throw him treats when he did what they asked.

And note that daughter 2 now has her head in the A hole!

I briefly considered following these folks around for a while for, if nothing else, the potential entertainment value but didn’t want to be thought of as a stalker so we went our separate ways.

3 thoughts on “Sam and the A hole”