Stateline, just before you get to South Tahoe, is where most of the major casinos are located in the Tahoe area.  Here are four which had big, impressive buildings:

This area was pretty congested as it was now lunch time so I paid attention to my driving and didn’t look around for any of the others.  There are lots of small casinos and there may be more big ones, too.  I didn’t make it around to the north side and I don’t remember if there were any big ones up there on the Nevada side of the state line.  I was in Tahoe about 20 years ago with my brother David and his wife Kendra.

I did notice while I was at a red light that there was a Baja Fresh restaurant on the opposite side of the street.  There used to be one in Raleigh which I really liked to eat at, but it closed, as have most if not all of them on the east coast.  There motto used to be: Eat Fresh.  No freezers.  No microwaves.  No can openers.

I had two yummy chicken tacos (which is what I always got in Raleigh) and since it had been so long I got a Mahi fish taco as well.  I’m looking forward to visiting lots of little taco joints once I get back out to the coast later this week, and enjoying lots of good fish when I’m in Oregon and Washington later this summer.  Now that I know Baja is still around out here I’ll have to keep an eye out for them.

After lunch I parked a few blocks from the South Tahoe beach and walked back to spend about a half hour in the shade taking pictures and just relaxing.  For a while I put both cameras away and just enjoyed watching everyone having fun.  Considering the proximity to July 4 it wasn’t nearly as crowded as I was expecting.

This 3-shot panorama was the opening scene at the South Tahoe boat launch and beachfront: 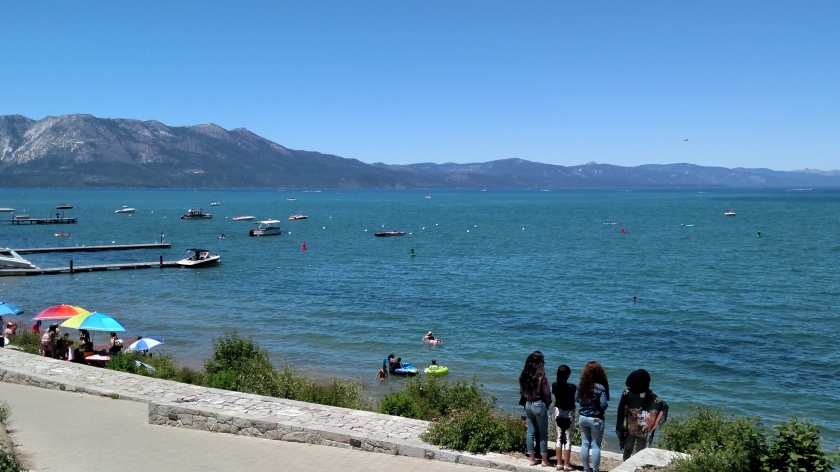 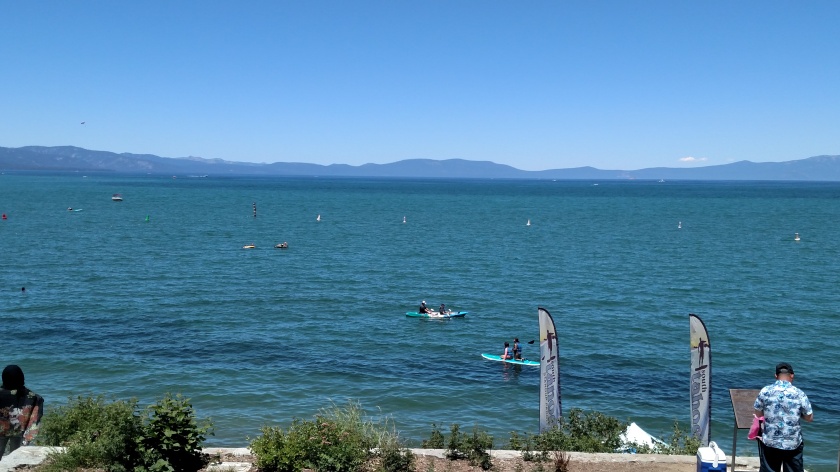 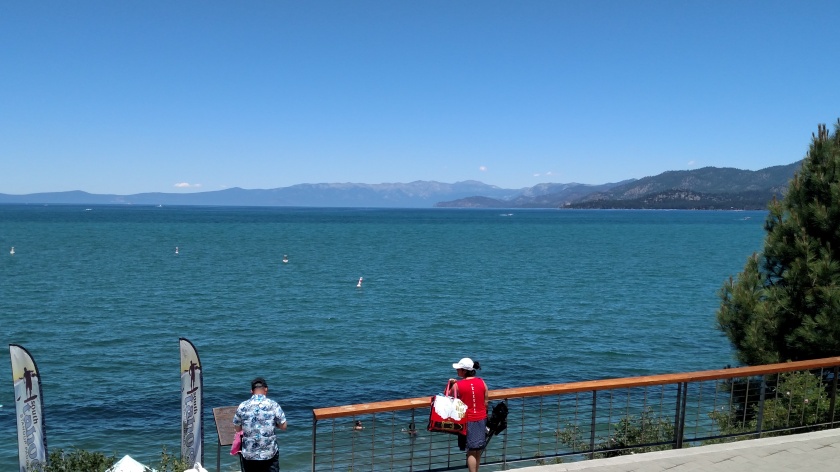 The rest of the photos I took from this area were with the digital camera and I will post them separately later today.

Walking back to the car I noticed these pieces of artwork in front of an office building: 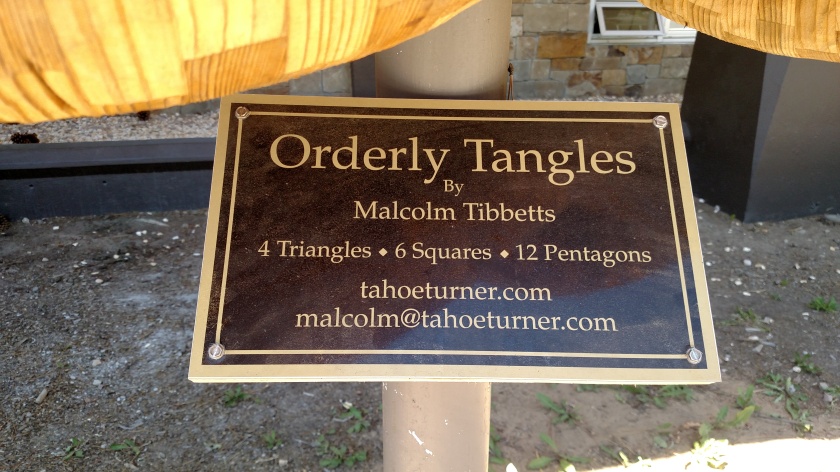 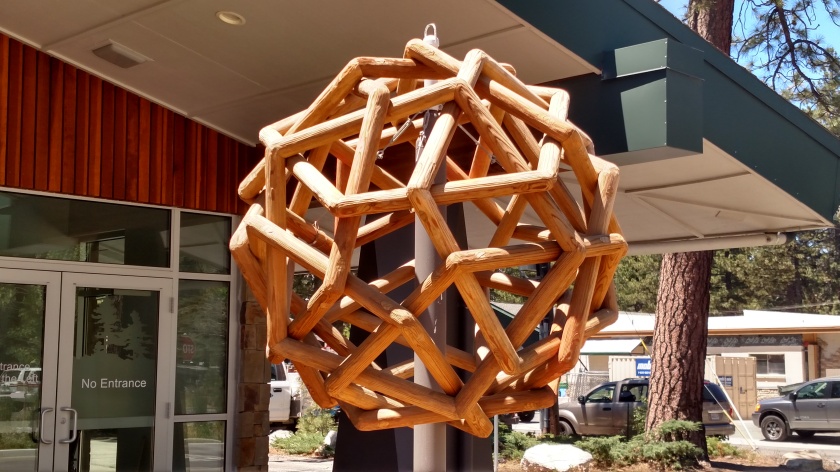 I then starting driving up the west side of the lake.  Actually the post title says Lake Tahoe, Nevada but from this point on, until I get back to the state line when driving east on Interstate 80, I am now in California.  About the western 2/3 of the lake is in California and the east side is in Nevada.  There are casinos east of the state line where it intersects the lake on the north and south shores.

I timed it perfectly heading back north as the shifting sun stayed behind my back.  The main thing which surprised and disappointed me about the west side was that it rose quite a bit in elevation in relation to the lake, and stayed a pretty good distance away from it.  I was really bummed that there weren’t more overlooks.  It seemed that when I got a glimpse of a great view there was absolutely nowhere to park.  And when I could park the view was mostly obscured by trees.  The first overlook (they call them Vista Points out here) was absolutely PACKED, with overflow along the road (illegally) and people everywhere so I just kept on moving up the road.

I was able to sneak in shots from a few places, though: 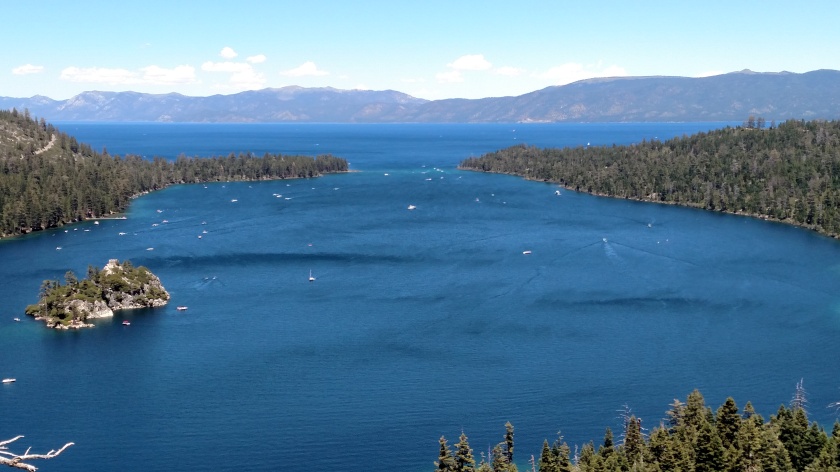 And this was a marina up near Meeks Bay.

This guy was just firing up to head out onto the lake. 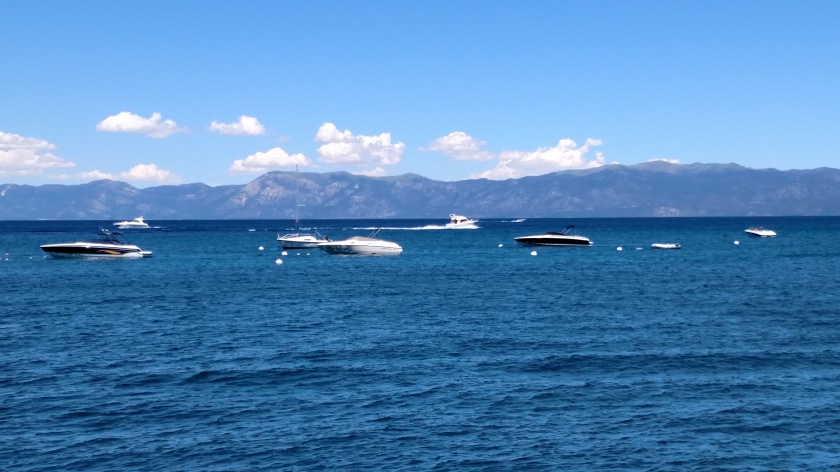 They were doing road construction on this side of the lake, too, and after I took these pictures I hit a long line which advanced very slowly.  I decided I had enough fun for one day so I bailed out in Tahoe City and headed up towards the dreaded interstate on Route 89 rather than go all the way around the lake as I had originally planned.  I got to the lake at about the one o’clock position on a clock face and left it at about 10 o’clock, so I did see 3/4 of the shoreline.

One thought on “Lake Tahoe, Nevada – South and West sides”