This area, located southwest of Eureka, California, is an actual place. My Airbnb host when I stayed down in Sonora, CA recommended I add this to my “to-do” list so Friday as I approached the area from the south I gave it a shot. It didn’t go well….

The Lost Coast does include part of the Pacific Coast and is accessible (and I use that term loosely) by three small roads. I started in on the southernmost road which branched off “The 101” near Garberville, CA in a little town called Redway. I didn’t get off to a very good start as my goofy GPS put me on the wrong road right off the bat. I caught the error very quickly and found the correct road which was nearby.

After driving about 9 miles I missed my turn (because the directional sign didn’t include the name of the town I was heading for) and when I saw a sign for a coastal town with a “lighthouse” I had already decided I didn’t need to go see I realized I was, again, on the wrong road (and for those of you who are going to say “JohnBoy, just use Google Maps on your phone” – guess what – there was no cell phone service in this area…). I corrected that error (and lo and behold when I was going the other direction the directional sign DID include the town I was heading for) and got on Wilder Ridge Road which is, without a doubt, the WORST ROAD I have ever been on in my life.  20 miles of pure hell.  This made the access road to Chaco Canyon in New Mexico look good.

This road was so bad it was almost comical. It was paved, mostly, although in some spots some or all of the pavement was gone and the parts of the road which were not washed away were just dirt and rock. There were bumps, ruts and potholes EVERYWHERE. I believe there were 3 or 4 places where the road narrowed to just barely one lane due to washout. And right before I got to my little town the road became a series of steep, wide switchbacks, just dirt and rock, which had been carefully graded to be about 3 lanes wide and prepped for paving (yeah, right – probably not in my lifetime). CalTran, the state Transportation department, has made some effort to patch small portions of the road but they missed way more than they got.

The only good part about this hour+ of my life which I’ll never get back is that I did finally make it to Honeydew, California, population 99. 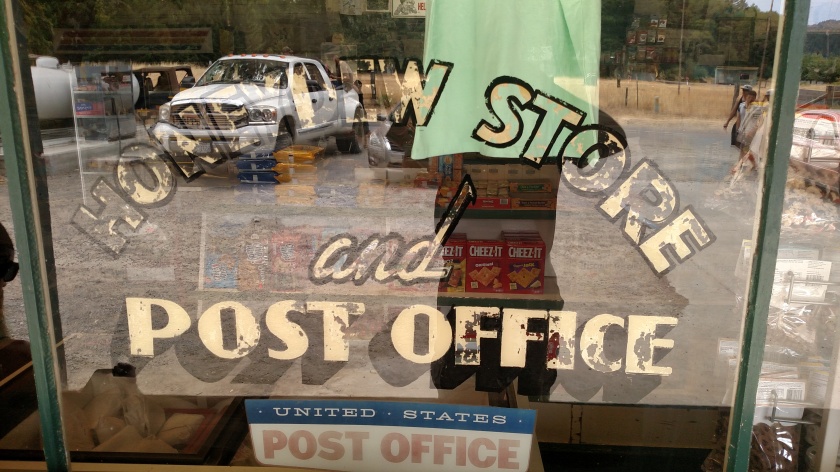 Now I had a decision to make. Do I turn left, right, or retreat the way I came in???

I got out of the car with my trusty map and approached two older ladies who were seated at a picnic table outside the general store. I think they knew what I was going to ask.

The bad part of the road I had just been on was 20 miles long (plus 8.6, not counting the overrun, coming in from Redway). If I turned left towards Petronia and eventually the coast and Ferndale it would have been another 44 miles. If I turned right towards Weott and “The 101” it would have been 25 miles. I had already decided I was going to take the devil I didn’t know over the devil I knew.

Well, the ladies concurred that all three choices were bad.  They said “all the roads are terrible”.  Terrific.  I opted to turn right and head for Weott.  That road wasn’t much better than the one I had already been on but it had retained most of it’s pavement and had fewer dirt and “washout” areas (and by the way, these are all winding, mountain roads). The best part of that choice was that the last 6 1/2 miles before I got out to “The 101” was all new pavement, completed just last year, through the Humboldt Redwoods State Park and was as smooth as a pool table.

I treated my car to a car wash when I got back out to civilization (although it may also need a wheel alignment and new shock absorbers after my excursion).

The other funny thing which happened during the drive in to Honeydew is that there were several areas where there were lengthy stretches of privacy fence installed on both sides of the road (and there was a surprising amount of traffic given both the remoteness of the area and the condition of the sorry excuse for a road). I thought maybe a nudist colony – like who would have time to even look up from the road – but the ladies said “Oh no, they’re all growing pot”.

And as I downloaded the photos from my phone to my computer this morning I noticed that yesterday was Friday the 13th.  Perfect.

One thought on “The Lost Coast”