History was not my strong suit in high school (nor were English or French, as those teachers would attest to…) but I learned an interesting history lesson shortly after arriving in Brookings, Oregon on Friday. I realize the title of this post seems to be a contradiction in terms but here’s the story…

On September 9, 1942, the Japanese submarine I-25 surfaced off the coast of the western United States. Crew members quickly assembled a specially designed modular aircraft which would carry two 170-pound incendiary bombs. The plane flew inland to a position near Wheeler Ridge, east of Brookings, and dropped it’s cargo. Their intent was to start a fire, causing panic and pandemonium (ask anyone living on the West coast how they feel about fire…). Fortunately, thanks to a wetter than normal summer and alert Forest Service spotters, crews were able to detect and extinguish the resulting fire before it got out of hand (and later found bomb fragments to verify what happened). The sub tried again 20 days later but farmers and military personnel spotted the plane and no fires resulted and no bombs were ever found. The September 9 attack remains the only time enemy aircraft successfully bombed the US mainland during wartime.

Here are photos of the sign I saw in Brookings: 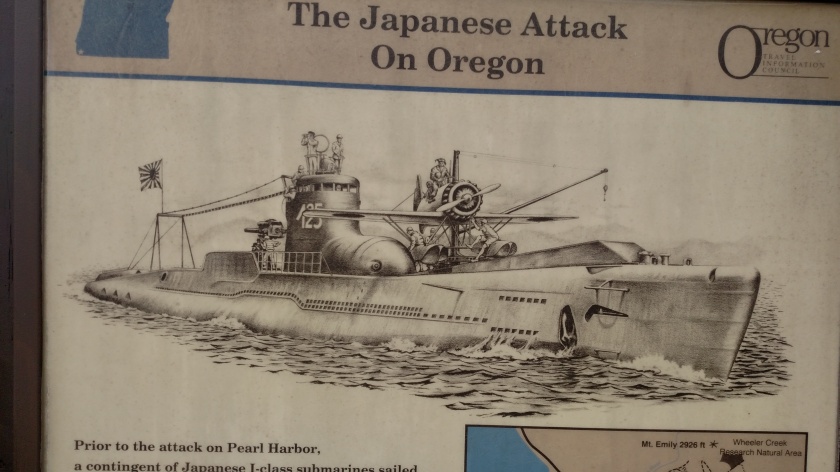 The story has a happy ending. In 1962 the pilot of the plane which dropped the bombs attended Brooking’s annual Azalea festival and surrendered his 400 year-old samurai sword as a gesture of goodwill to the United States and the people of Oregon. Here is a picture of the sword I found online:

He also returned in 1992 and planted a redwood tree at the site of the bombing.