As I posted early yesterday morning, because of my delayed arrival on Prince Edward Island I had to try and make the best of it and cram as much as could in to the short timeframe I had to work with.  My plan for Friday was to drive all the way out to the western tip of the island (the town of Tignish and beyond it to North Cape – the furthest point north).  MapQuest said it would take about an hour and a half just to get to Tignish (not a very big island but small roads, through lots of small towns with traffic lights, to travel on).  There are two arterial roads (smaller versions of the Trans Canada Highway) which cross the central and eastern portions of PEI but only Route 2 (non-TCH) in the west.

Once out at North Cape I would make my back to the Confederation Bridge on a long “primary” scenic road, stop at a venue I wanted to visit, and be able to leave the island no later than 1 o’clock.  Friday was a travel day and I needed to get up to Miramichi, New Brunswick by the end of the day and I had a scenic road I planned to drive on and a National Park to stop at along the way.

That was my plan.

Things changed quickly, literally only about a minute after leaving my Airbnb in little Canoe Cove, PE at 630 am to begin my long day.  My car informed me that my right rear tire had only 9 pounds of air pressure, compared to 31 in each of the other three.  PEI – Day One now became PEI – Day Only.

When the indicator light came on I immediately stopped the car and got out to take a look.  While it was clearly low, it wasn’t like I’d be riding on the rim so I proceeded slowly down Route 19.  I adjusted the setting for my dashboard display to view the tire pressure screen full time and as I drove kept an eagle eye on those numbers.  I had to drive maybe 2 miles on Route 19 just to get to TCH-1, a 2-lane, much more heavily traveled highway. The number never got lower than 9 so I continued, cautiously, west on the TCH in search of a gas station where I could put air in the tire.

I had already made the decision to abandon my plan to drive out to the Cape.  If I was going to have a flat tire or blowout I wanted to stay on more heavily traveled roads and in places where I would hopefully have cell service to call for help.  I had to drive 22 miles just to get to the closest gas station as I approached the bridge.  I put air in the tire, filled the car with gas and was on my way.

My next goal was to find a tire store which could check the tire for leaks and rotate my tires, which I was overdue for anyway.  I had wanted the shop in North Sydney to rotate the tires while they were working on the car Wednesday but by the time the part arrived for the a/c repair and they actually started their work I was “on the clock” to get out to PEI by dark and I told them to skip it.

I crossed the bridge into New Brunswick and took Route 15 to Route 11 which would take me up to Miramichi.  I had wanted to take a scenic coastal road but, again, decided to stay on the bigger road.  Hopefully I’d have time to backtrack later.

I had left Canoe Cover very early and assumed there wouldn’t be a tire shop in any of the small towns along this new route which would be open before 9.  I stopped at a Tim Hortons in Shediac to buy a box of timbits – I thought for the week I was having I deserved it.  Still too early for a tire shop, I continued north to the next fairly decent sized town, Bontouche.

I got off Route 11 there and traveled both directions away from the highway hoping I might just stumble on a tire shop.  I did see this cute little ice cream shop which wasn’t open yet but I did stop to take a picture: 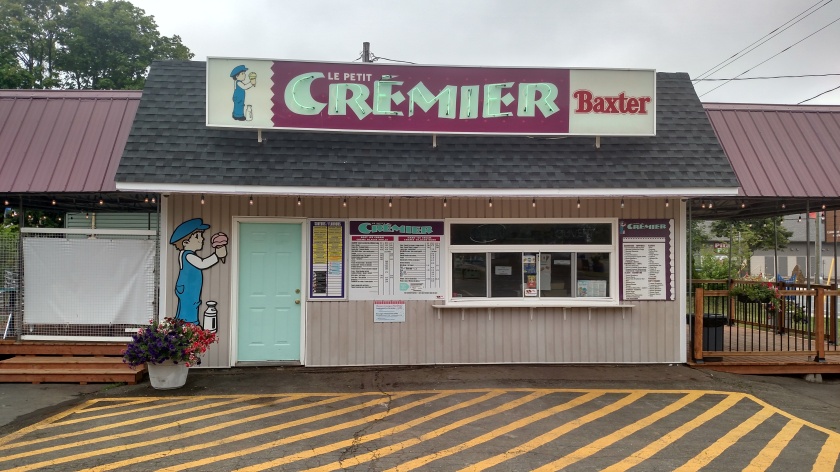 I also wanted to refill my water bottles and decided to take advantage of the cloud cover and do it here.  The parking lot was empty but I saw this sign: 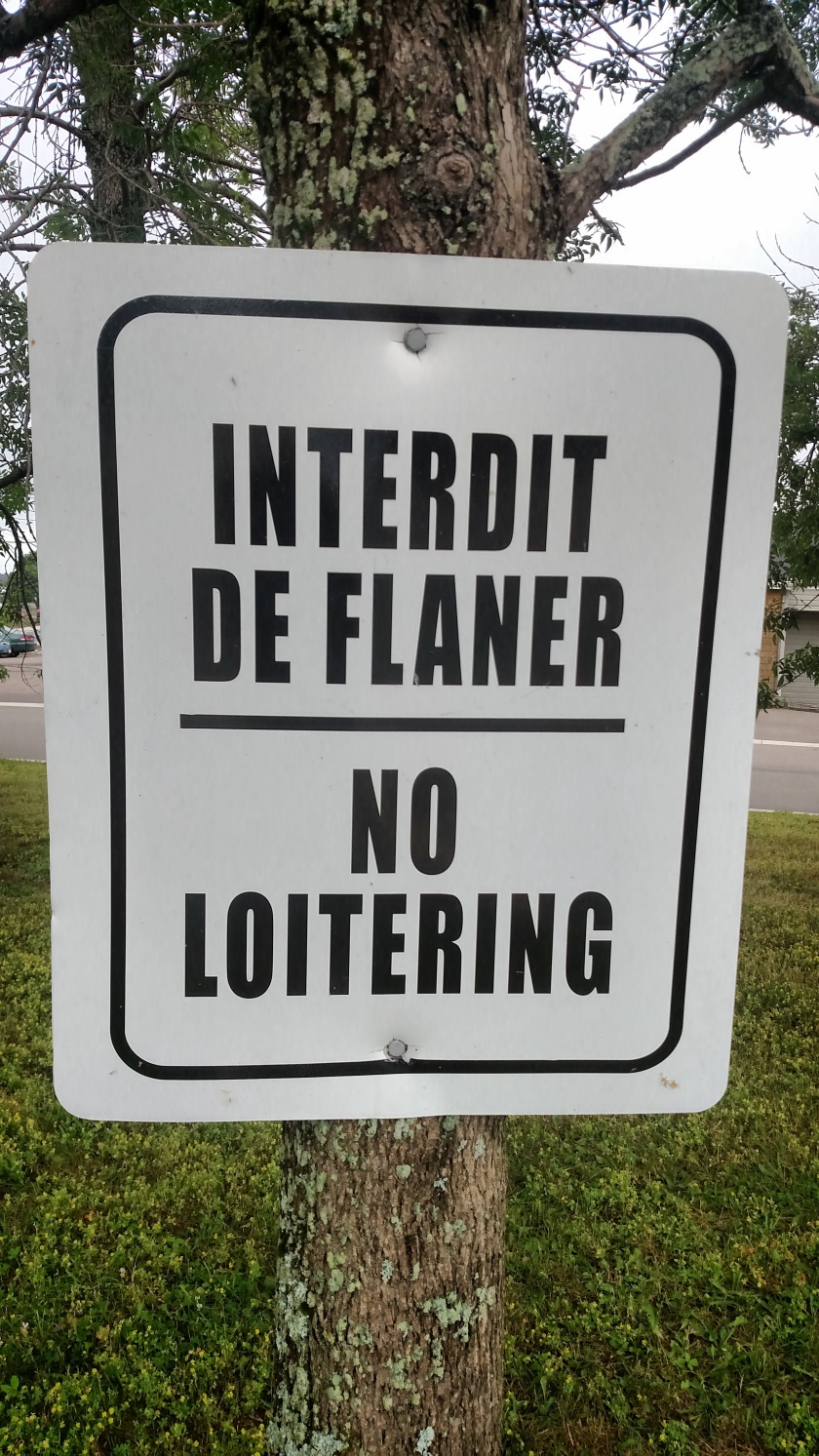 If you ever want to impress you friends by saying it in French, there’s your script.  I decided not to go to jail just for filling water bottles in an empty parking lot, where I’d be easily spotted by authorities, so I skipped it.  Back to my search for a tire shop…

No luck, so I went to another Tim Hortons to use their wifi and look for a shop.  I was very close but would have never have found it on my own.  When I got there I learned it was out of business.

Back on Route 11 north to the town of Richibucto.  Tim Hortons.  Tire shop.  Too busy to get to it for a while.  Back on the road.  At all of these stops I would go to a gas station and put more air in.  Each time I filled the tire it got to 34 psi, which my other tires reached once I drove for a while and got some heat in them.  On my car (a Nissan Altima) you add air until the horn honks once to let you know the tire it full – isn’t technology amazing?  Each time, by the time I had gotten to the next stop it had dropped to the mid 20’s.

At this point I was so close to Miramichi, a much bigger town, that I decided to just go there.  When I was speaking with Dave I told him of my dilemma and he said there was, in fact, a large Canadian Tire (brand) store there which would be right along Route 11.  I got there around 1230 and was given an appointment at 130.

I walked to a nearby restaurant for lunch and then walked around the big parking lot for the shopping complex just to get come exercise.  When I got back to the shop at 130 they were just wrapping things up.  They had removed a nail from the tire, patched it and rotated the tires for me.  On my way at 2 pm.  I stopped at my Airbnb a little ways further north on Route 11 to get the key.  I had been keeping my hostess there apprised of my situation and wanted to let her know it was resolved.

I drove back south to the north end of the scenic road I had planned to take all along and drove south on it until I gotten so far that I’d have to turn around and take Route 11 (a faster road with no lights until I got to Miramichi) back to get home by 6pm.  I hadn’t slept much the night before and was totally exhausted.  I wanted to check in, make a few posts and go to bed (and again, change of plan, I ended up having a very nice conversation with my hostess after making my two posts last night and didn’t get to bed until much later).

As I drove in to Miramichi, which Dave taught me is pronounced mira-mi-SHE (not the literal mira-MICHI as I had been saying),  I saw this water tower: 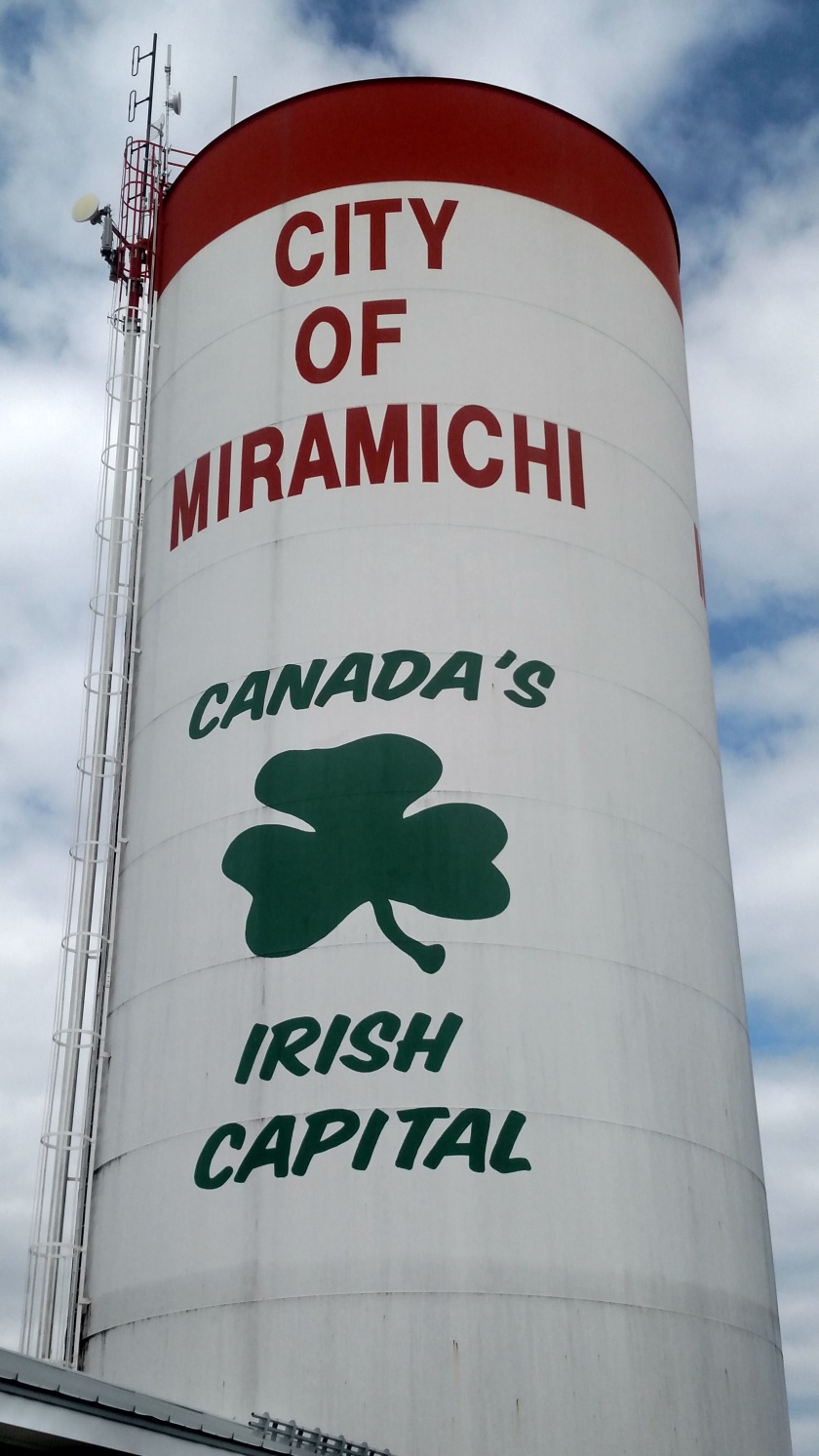 Hopefully, after my week of car related issues, a wee bit ‘o Irish luck will rub off on me….