Sunday was a travel day as I moved from one Airbnb to another but it wasn’t very far away and there was lots of time to tackle a “primary” scenic road in extreme northeast New Brunswick. 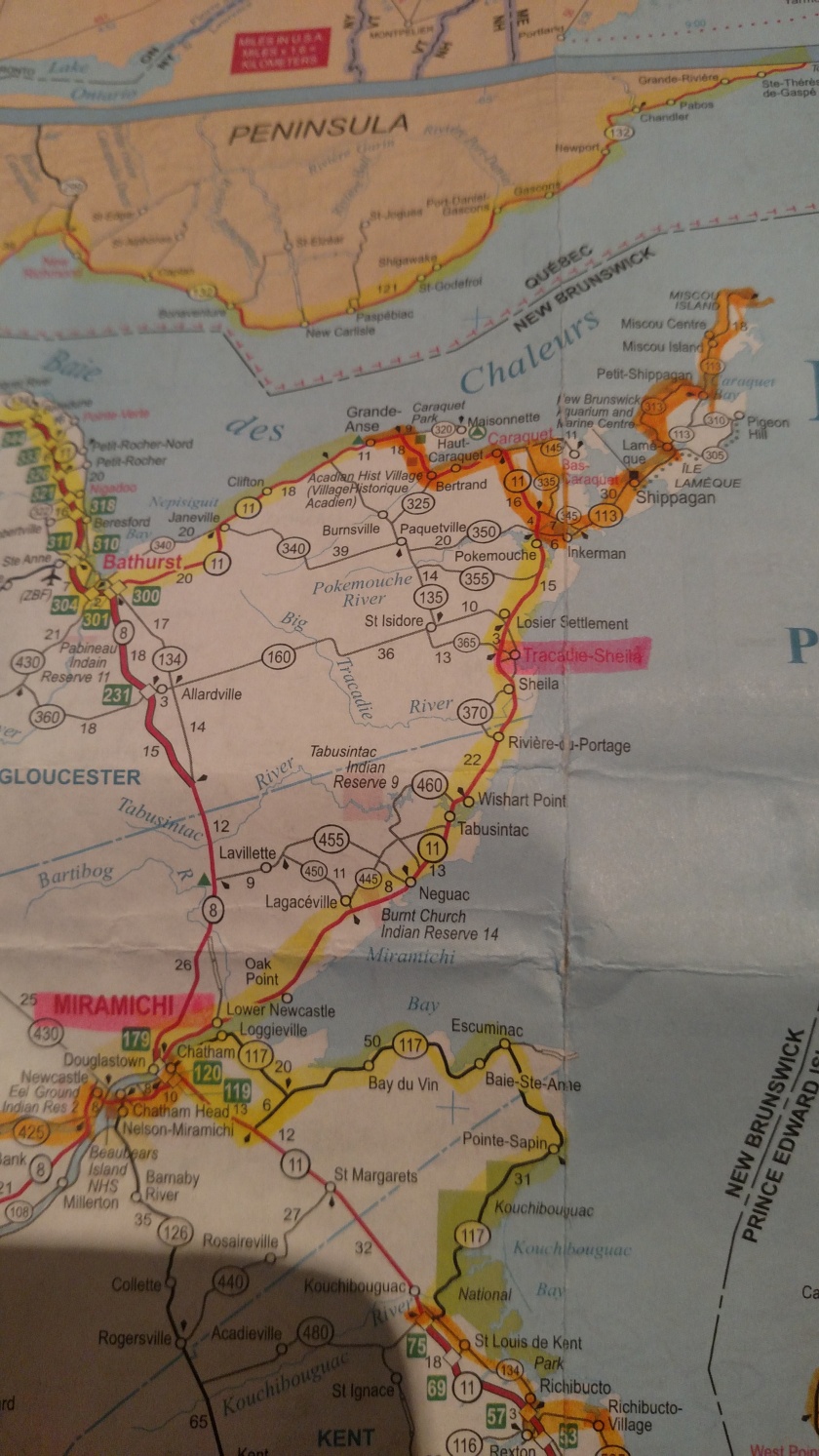 Before we said goodnight (or more accurately good morning, as it was well after midnight) after our long dinner and post-dinner conversation my hostess in Miramichi told me to expect two things after I left town and headed north.  One – that I would see lots more Acadian displays which, as you will see, was true.  Two – I would start to see and hear things almost exclusively in French, which also turned out to be true.

Shortly after I left town I saw something I certainly didn’t expect: 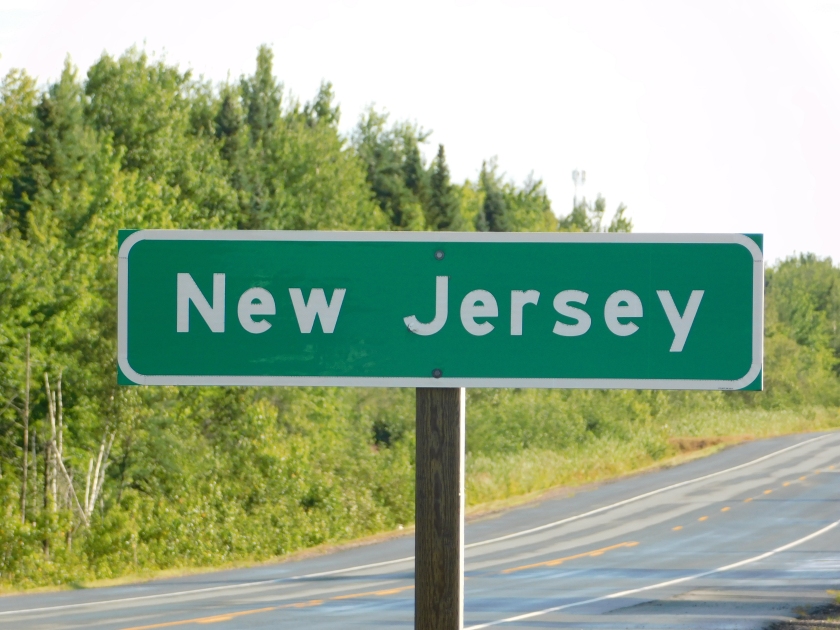 Wait.  What?  Did I take a wrong turn after I left Kouchibouguac or am I still feeling the effects of all the wine we drank?  No, it’s just a tiny little town on the road I was on.

When I stopped in Tracadie-Sheila to check out where my Airbnb for the night would be I saw this Acadian ear next to a hearing-aid store right up the road: 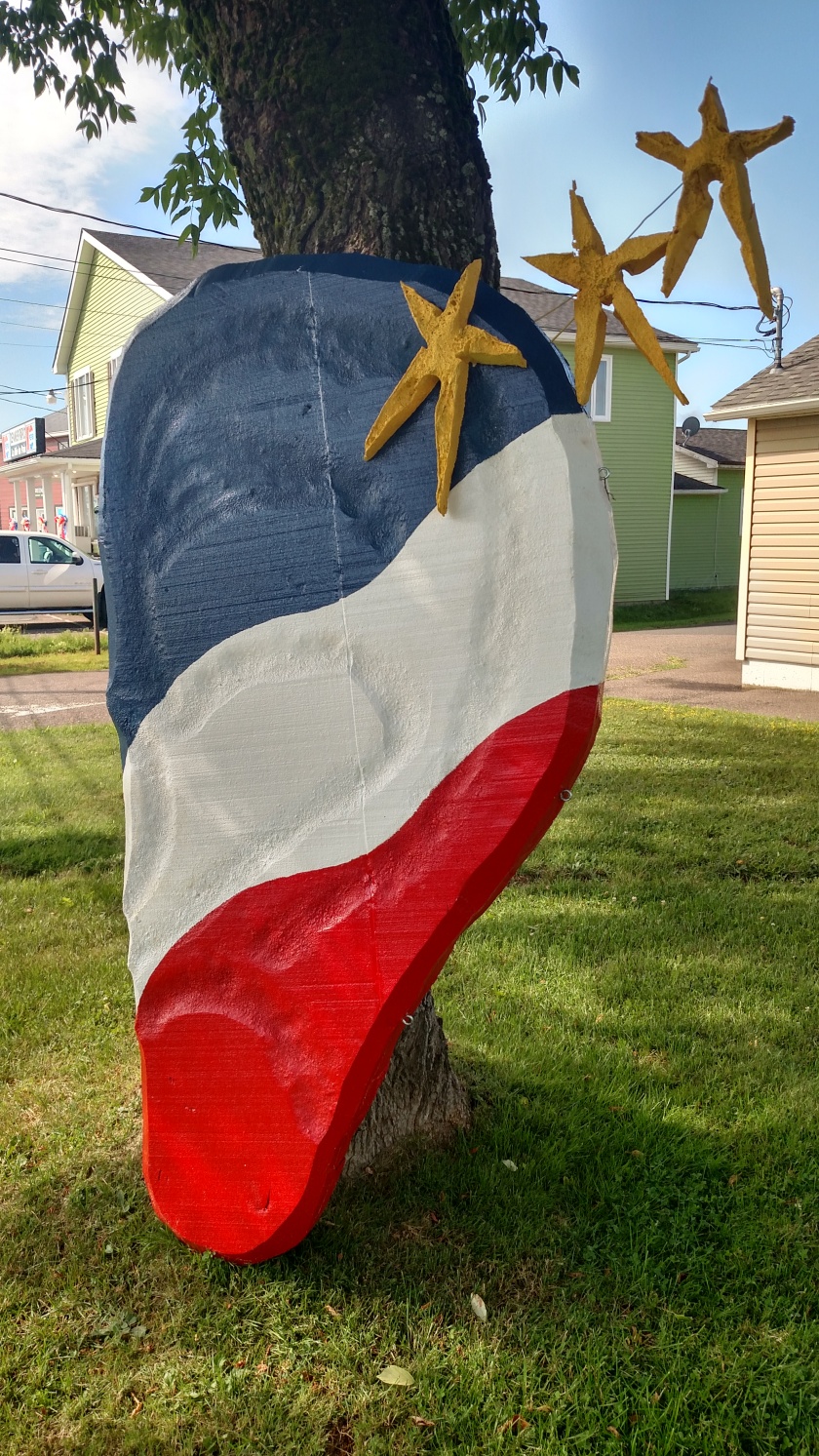 This next one had bizarre elements as well.  As I was driving up on Miscou Island after having seen the colorful boats and tried to take photos of hovering seagulls, I drove past a house on a small road with some unique Acadian stuff.  After seeing the display I turned around so I could park on their side of the road.  I went past their driveway so I wouldn’t block it and parked near the end of their house.  As I was getting the digital camera out I noticed something in my peripheral vision.  Past the edge of the house this giant bird moved from right to left to the edge of the fence and stopped, like it had heard me pull up.  It sat there watching me. 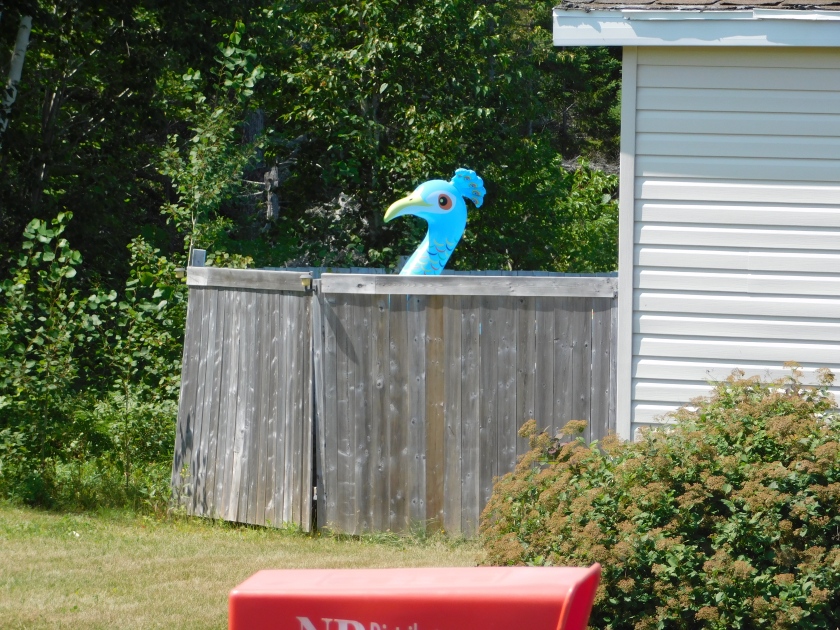 And as if that isn’t strange enough, the wind (this was the very, very windy day) was blowing left to right from this vantage point so it wasn’t like the wind pushed it to that corner of the pool.

I got out of the car and took my photos: 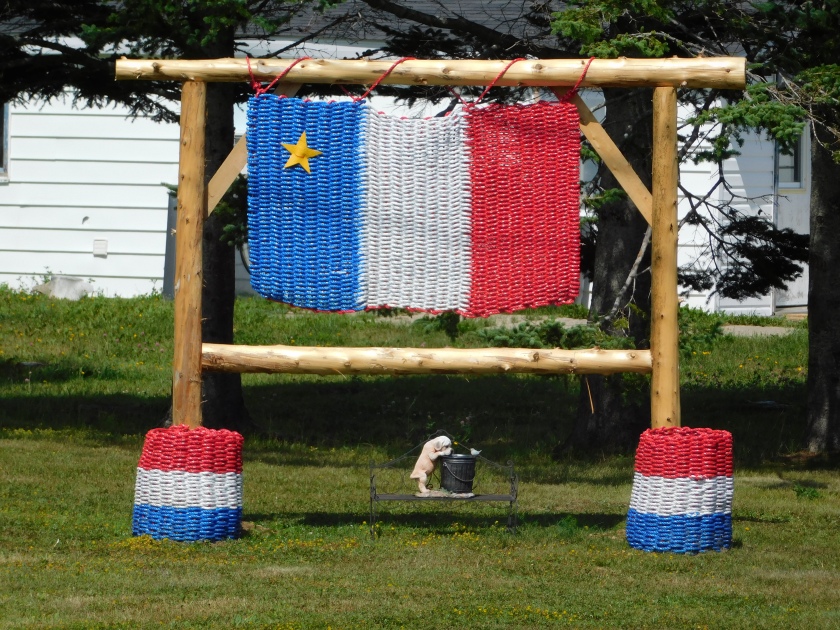 That is what I wanted to come back for.  It appears to be make of rope used on fishing boats. 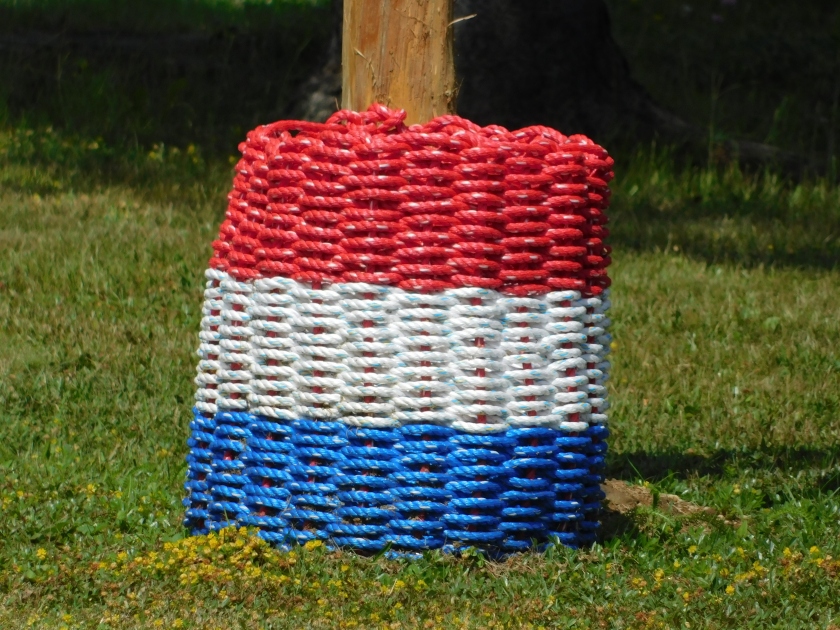 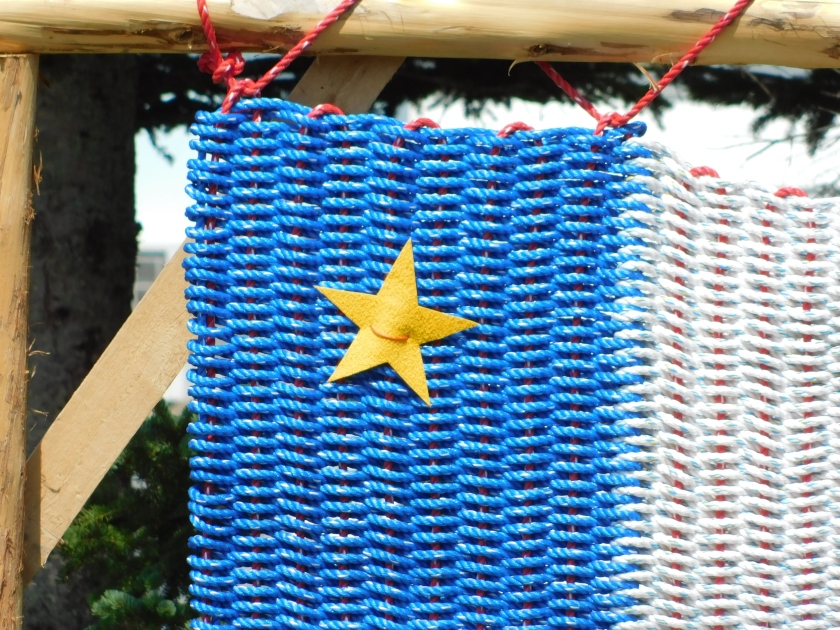 And there was a small mat hanging on the house itself: 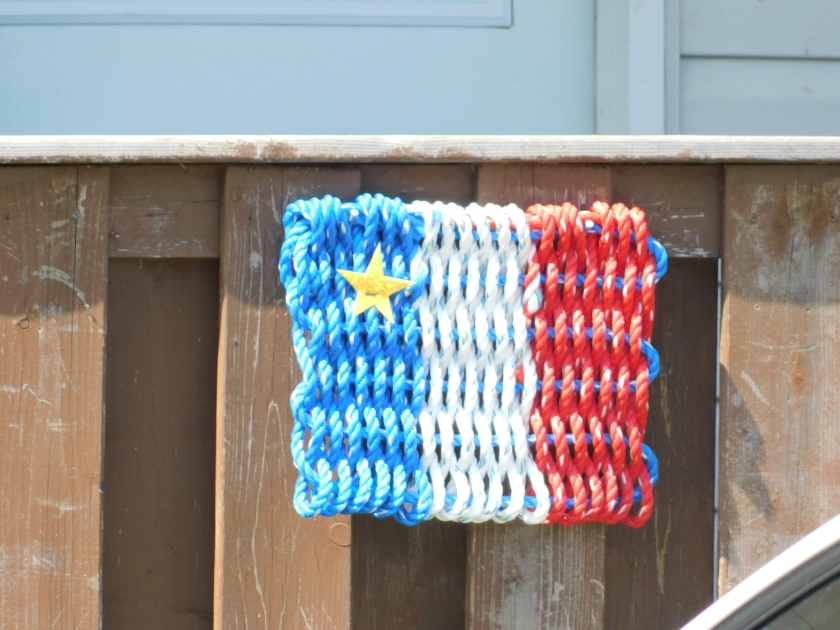 Here are a few more Acadian things I saw.  I’ve included two from the next day just to keep them together.  There won’t be any more for a little while but I suspect they will show up again later in the trip. 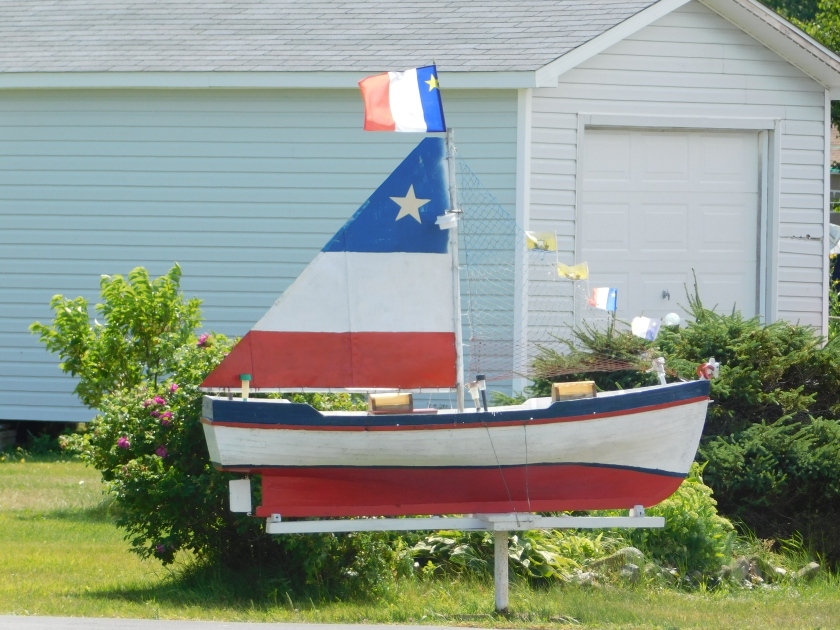 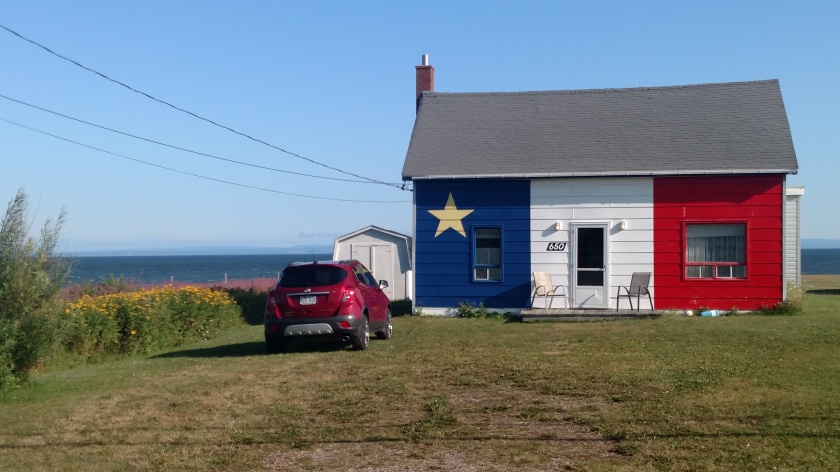 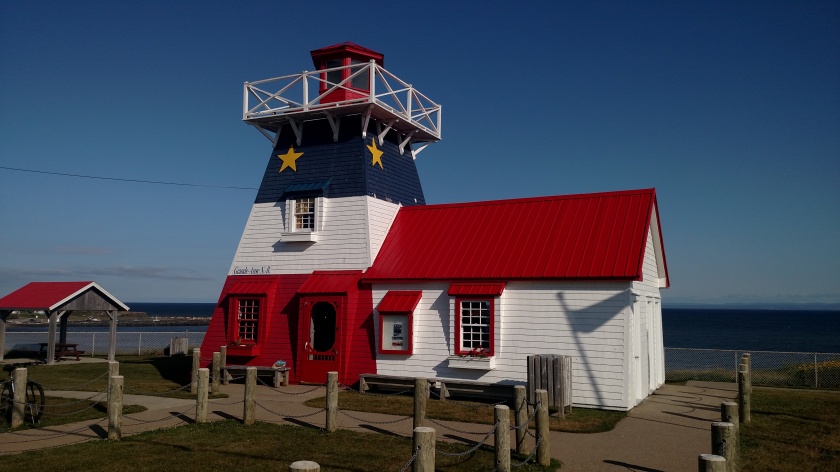